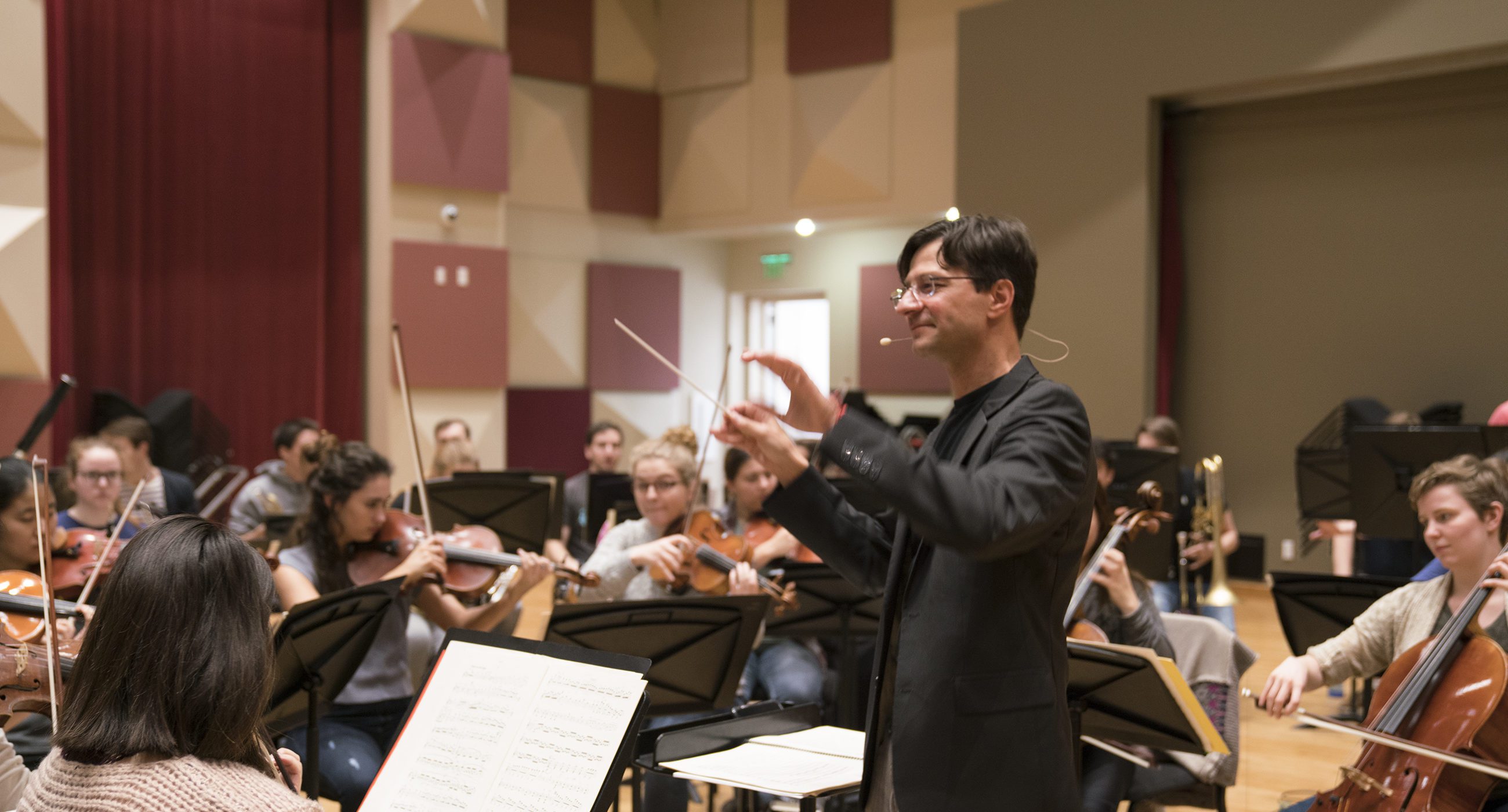 How did you get started at Colburn?
I was a graduating conducting major at USC and Yehuda Gilad needed an assistant for the Zipper Outreach concerts. At that time, those concerts were done with a different type of orchestra, with local professional musicians. So before I started here officially, I was helping with the Zipper Orchestra for about 3-4 years, so it has really been about 14 years at Colburn.

What’s your favorite thing about teaching here?
I just started teaching conducting last year. I love it because first, I have something to say musically to the students. Second, I can see that what I’m doing really truly matters to the kids. Some of the students come constantly outside of their classes to ask questions, and they come early to their classes. There’s a lot of students too, so there’s a huge interest. That makes me happy.

What can we look forward to in Sunday’s CYO and CCO concerts?
For Sunday, we’ve prepared an eclectically awesome program. There will be Wagner, Rimsky-Korsakov, Saint-Saëns, and Tchaikovsky. We’re bouncing around the globe which is really cool, because my credo is that they have to be exposed to great classical music. I’m sure later on in life they will play all kinds of music, whether they choose to be musicians or not, but they will carry with them the repertoire that we’ve done together on the battlefield of the stage. They’re not easy pieces, what we’re doing. They’re actually very hard. But CYO is the best we’ve ever had, the biggest and the best.

And then in the chamber orchestra, we’re playing repertoire that is excruciatingly difficult, but so much fun. The Verdi is a quartet that was arranged for chamber orchestra, whew. Then we’ll do a little bit of Holst and Purcell, so again a very eclectic program, very difficult but lots of fun. Both orchestras, every time I throw them another challenge, they rise to the occasion. Every time.

Sunday’s concerts will be dedicated to Maestro Daniel Lewis, who led the Colburn Chamber Orchestra for many years. What was it like studying with him?
Daniel Lewis is a legendary figure here in Southern California and in the American orchestral conducting field. I had the chance to study with him in several master classes and I will forever remember every word he told me about conducting, because they were profound. He also brought the chamber orchestra here to prominence. He was a person that truly lived a very long and very successful life, and changed many lives by teaching and conducting. So it’s a very tiny contribution that we’re doing to honor him but it’s very important to me, and all of us who knew him.

What has it been like conducting those orchestras for so long?
When I came here, I inherited two very fine orchestras. My predecessors did very well, but since then, the orchestra has grown in numbers. Both CYO and CCO are massive now, but it’s massiveness with quality. The orchestras are special.

It’s not just me that has been helping build these orchestras, it’s the Community School administration team: Sara Hiner [Assistant Dean], Dean McAllister, Candy [Smirnow, Business Manager and Registrar], Ali Verderber [Orchestra Librarian], and the previous librarians before her that helped build this. Our philosophy is to create a professional environment. I will treat the student like professionals, but at the same time in a nurturing way. We must be doing something right if the orchestra is getting bigger and bigger, and better and better. There’s a lot of secret stuff in the sauce but I think it’s because the team that is working on that program is really focused. We aim to be the best youth orchestra in town, and I think we are now.

Right now you’re also conducting the Zipper Outreach Orchestra that will have played for five different elementary schools by the end of this week. What has the process been like preparing for this?
It’s been very interesting, because a lot of things have changed in the structure of how we’re doing it. We have Debbie Devine helping with the script, which was a collaboration between Anthony [Trionfo], Gallia [Kastner], and Jordan [Brokken], under the mentorship of Yehuda [Gilad]. I would not say it has not been without challenges, but I think at the end of the day, we’ll have prepared a concert for the students that is very special.

Five days, 10 concerts. 10 concerts that I hope will change many lives. This orchestra has been doing this for over 35 years now, starting with Dr. Zipper, then with Yehuda Gilad, who is my mentor, and now me. So only three conductors have ever done this. I cannot stress how important this is, not only for Colburn, but for the whole community that we live in. First, to give back what we know about music and to share our love for music. Second, because once in a while I get people, not only here at Colburn but in other countries, that come to me and say, ‘10 years ago, I came to one of those concerts and it changed my life.’ Those are the moments that I live for. Not many things that I do in my life have that kind of profound effect. So this is one of my most important tasks and goals, and it’s something beyond work.

What’s some advice you have for your students?
Keep your love for music; that is the most important thing. Technique is very important, but love, dedication, and imagination are the most important. Knowledge is something that you can acquire, but imagination and love, they’re tough cookies. Either you have them, or you really have to work hard to open your soul and your mind to it. What really matter is for the love of music to be manifested in somehow on stage or wherever you’re playing, even if you’re at home.

Another piece of advice I’ll give is to never treat rehearsal as anything other than a concert. I had a rehearsal with Pinchas Zukerman once and suddenly it was an open rehearsal, which I did not know about beforehand. It was our first rehearsal together. I was 28 or 29, Pinchas was one of the most famous violinists, and suddenly it was an open rehearsal and a full house. I thought, ‘But hold up, aren’t we going to rehearse, where I’m allowed to make mistakes?’ There’s no such thing. Rehearsals are not for this, they are like performances.

Also, bring your shoes to performances. It’s not very fun to conduct in black socks.

Is that something you have experience doing?
More than several times. It’s happening more and more lately than ever before.