New Insights on a Familiar Work after Kanneh-Mason Master Class 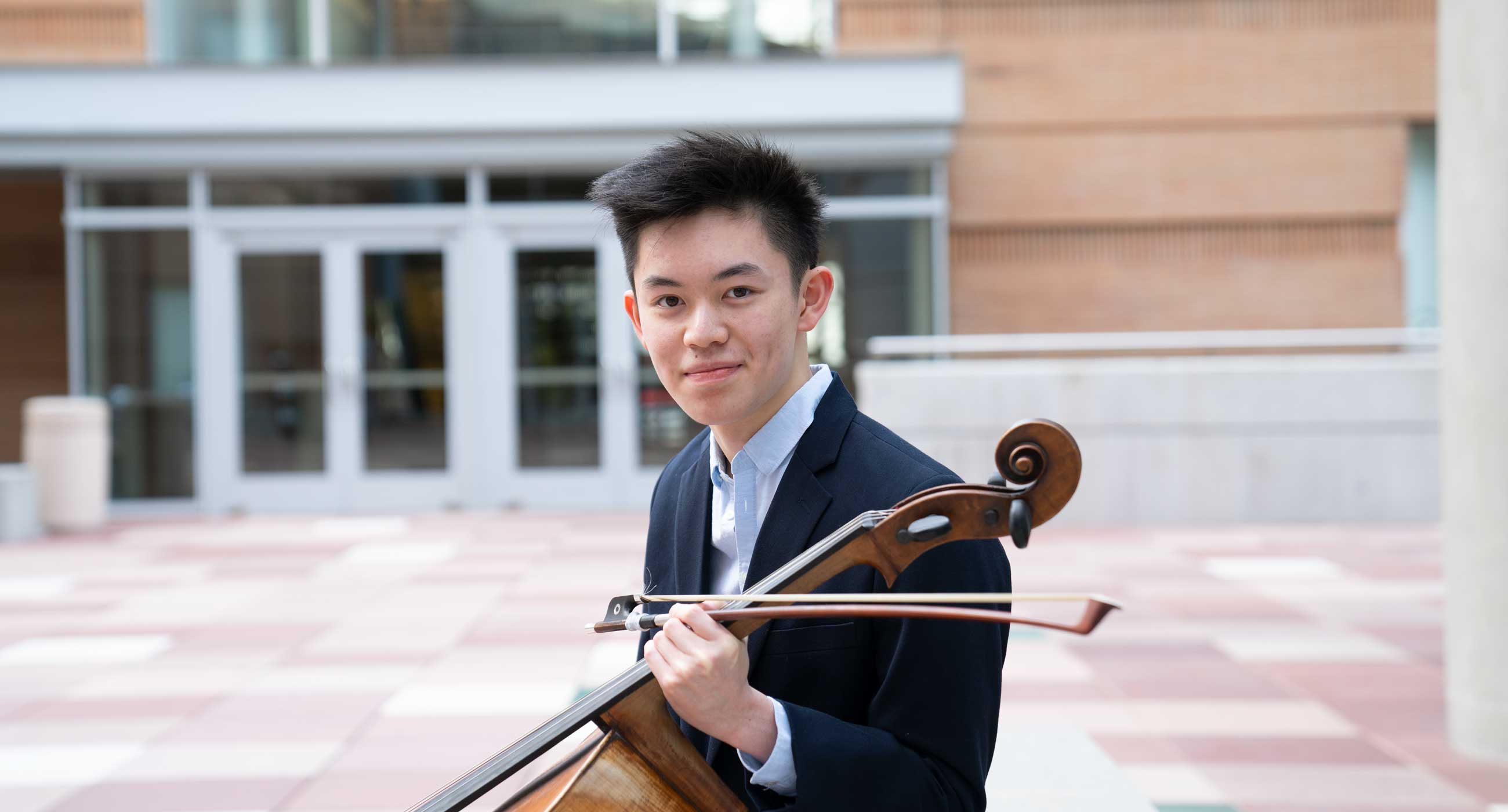 Music Academy cellist Benett Tsai performed Elgar’s Cello Concerto for Sheku Kanneh-Mason’s master class on December 2, deepening his connection with the work after having performed it three years ago in his native country, Australia.

How did you start playing cello and how did you end up at Colburn?
I was introduced to the cello through my uncle who is a cellist. Up until the end of last year, I was in a non-performing arts school in Sydney, Australia, that’s where I’m from. Although I’d been thinking about moving to a music school for quite a while, I’ve been increasingly advised by musicians to move overseas. After playing for a musician here, a cellist, he told me about the Colburn Music Academy. So I visited here and I felt that I really liked the dynamic environment here, and I should just give it a go.

How do you like it so far?
I like it very much. I like the performance opportunities that students have here, and it’s really invaluable for us because we get to learn so much from those experiences and improve our playing.

What is it like studying with your teacher Clive Greensmith?
I’m just really glad to learn with Mr. Greensmith at this stage of my development. He’s such a wonderful musician. He’s very caring, kind, and committed, and he always has the best interest of his students in his heart. Even though he’s such a wonderful musician, he never imposes a musical idea, and he lets you discover music in your own way.

You participated in the master class with Sheku Kanneh-Mason last weekend. How was that?
It was a great experience. I chose to play the Elgar Cello Concerto for him because he recently recorded it. I enjoyed hearing his insights on the piece and his unique approach to it. He’s such a natural player; it was wonderful seeing up close how he works.

How long have you been working on the Elgar Cello Concerto?
Actually, I first started playing that work almost three years ago. I played with a couple of orchestras back in Australia, and I just decided to revisit it because Mr. Greensmith is British, and he has so much insight into the concerto, as well as Sheku. I just wanted to revive it and see how I would play it differently from almost three years ago.

How is it different?
I would say that my interpretation has been more, I wouldn’t say mature, but I’m more self-aware of how I’m playing it rather than just intuitively playing through it. I’m analyzing it more rather than just going with the feeling of the music.

How did you prepare for the master class?
I took it as a learning experience. While I did do a studio class beforehand, I just picked the Elgar Cello Concerto up a couple weeks before when I was told about the master class. I just quickly decided to learn it again and play it in as many situations as possible.

What was your most notable takeaway from the master class?
I would say the attention to the harmonic qualities of the work, the overall mood of the work, and how there can be so many shades of emotion in Elgar’s work and how he can capture it.

What was it like working with Sheku?
It didn’t feel like a typical master class because the atmosphere and the way he commented on my playing made me feel more like he was sharing his ideas in a very friendly way. He never really imposes his own musical idea on you, but he always suggests something to you. It is actually quite refreshing to have this kind of experience. Since then, I’ve been able to further explore the work in a deeper way.

What else are you working on right now?
Currently for my learning, I’m doing the Bach six cello suites. And then for performing, I’m revisiting the Haydn first cello concerto. I’m playing it back in Australia with a local orchestra.

Are you performing on any end-of-semester concerts here?
I have a Music Academy chamber music concert. We’re playing the third movement of the Beethoven “Ghost” trio. We had already played the first movement two months ago.

How has your experience been in chamber music here?
The Colburn School has such a great chamber music program. Getting to work with other students is a great experience, not just playing music with them but how to work and collaborate with each other. Working in a chamber music setting in the rehearsals and with the group gets you to know people in a very in-depth way, and it’s not just a one-off, but you’re always working with them week in and week out. It’s these sorts of experiences that really help you to learn how to approach a piece of music and how to improve as a group, not just yourself.

What do you hope to do with your music in the future?
I hope that my music will make a positive impact on people’s lives and classical music in general. Whatever capacity my music career will take, I hope that I will enjoy it very, very much. 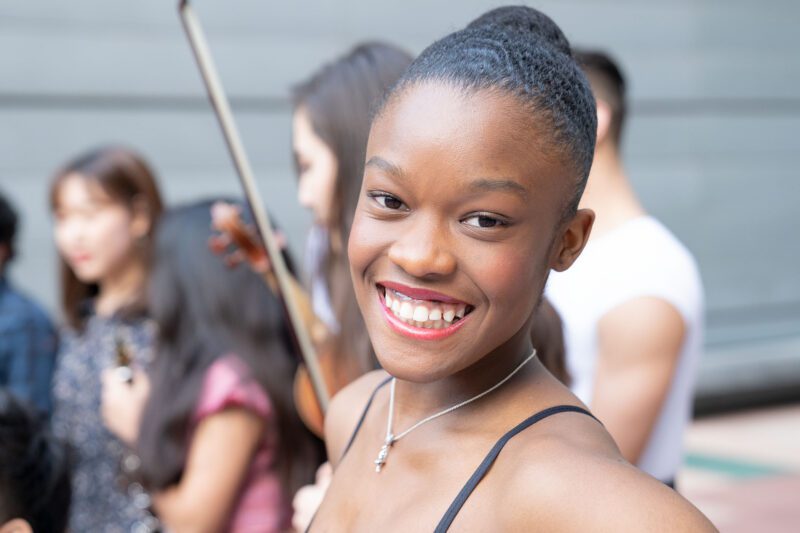 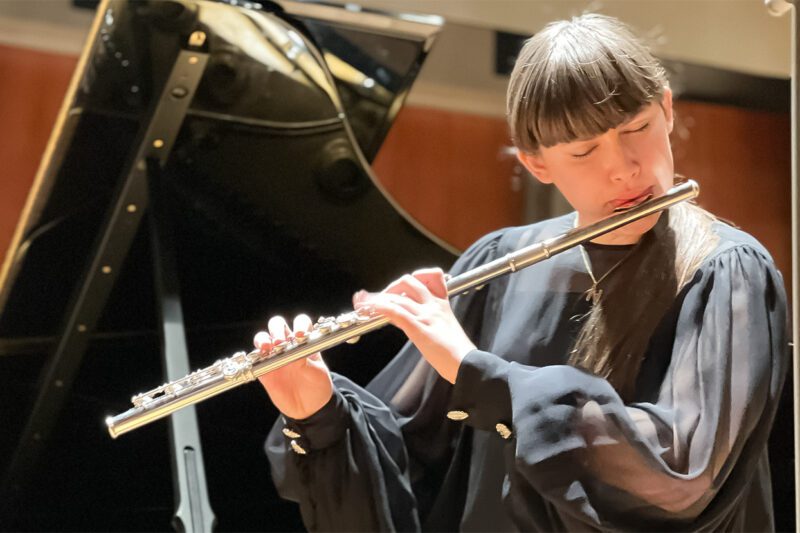