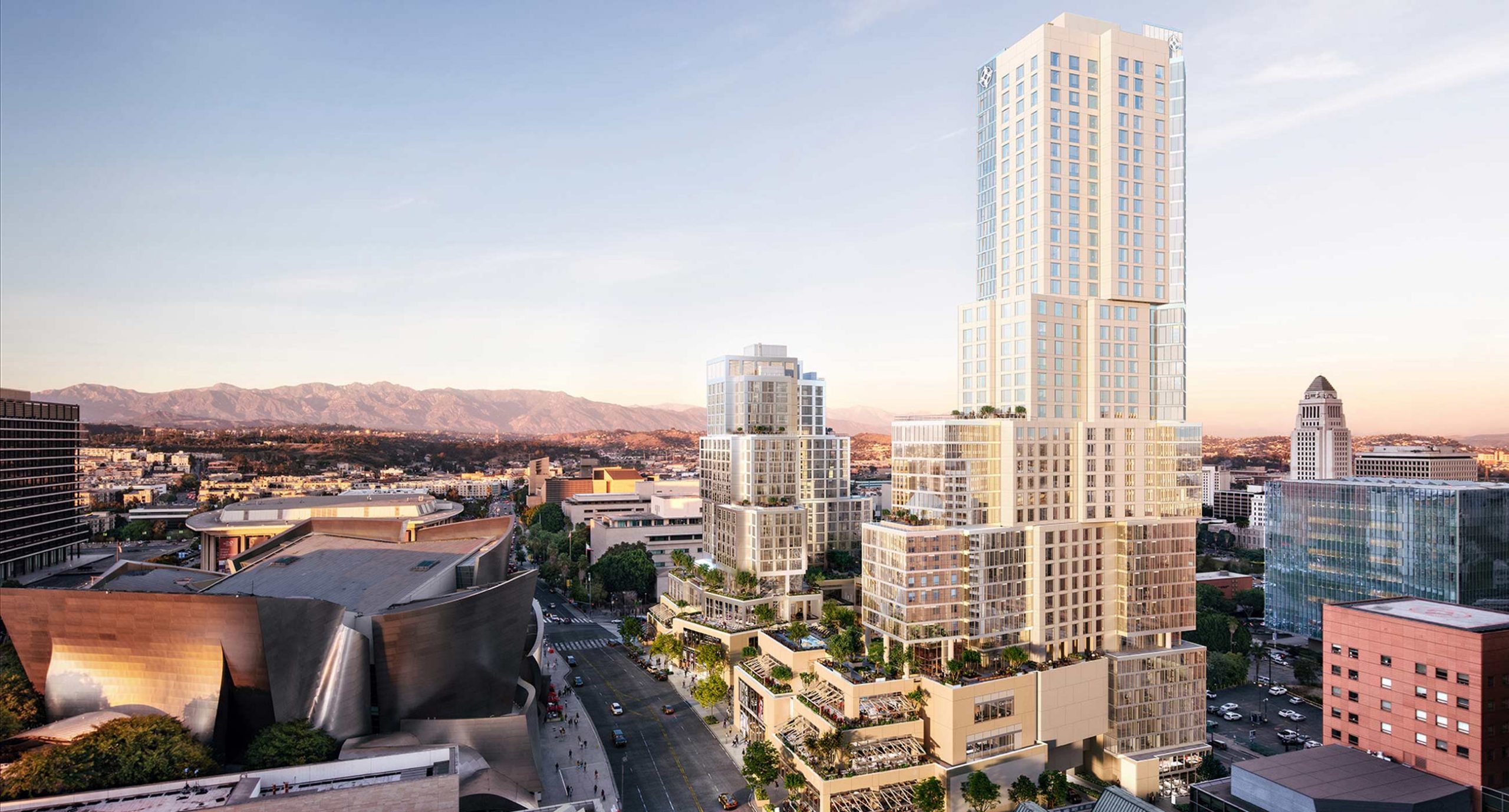 Located across the street from Colburn and Walt Disney Concert Hall, The Grand LA is changing the landscape of Bunker Hill.

As students and families return to the Colburn campus this fall, they’ll notice a major change to the Bunker Hill landscape. A new building project across the street from the Colburn campus is well underway and changing the downtown skyline. Called The Grand LA, this multi-use development will include shopping, restaurants, a 45-story residential tower and a 28-story hotel once complete.

Designed by Frank Gehry, The Grand LA faces another landmark by the celebrated architect: Walt Disney Concert Hall. “It’s been exciting to build something so close to something I built before and to be able to have them talk to each other across Grand Ave,” said Gehry in an interview shared at The Grand’s groundbreaking ceremony. “Right now, there’s a great opportunity here to make a community of cultural things.”

Gehry’s vision for The Grand was to create a centerpiece for Grand Avenue that promotes community gatherings and cultural performances in an open space, in addition to providing shopping, dining, entertainment, and residential experiences. In March, the project celebrated a construction milestone with the topping out of its two towers and is expected to open in early 2022.

Development of The Grand is being managed by Related Companies, which also funded and developed Grand Park on behalf of the County of Los Angeles. Rick Vogel, Senior Vice President at Related Companies, said the company saw the potential of Grand Avenue and Downtown Los Angeles early on. “What excited us about the project was that we saw where Downtown LA was likely to be headed. It had this incredible collection of performing arts and visual arts facilities.”

The Grand will be walking distance from eight different entertainment and cultural venues including Colburn, the Music Center, Walt Disney Concert Hall, The Broad, and the Museum of Contemporary Art, creating a natural synergy with the neighborhood’s arts destinations. It will also host its own permanent and temporary public art installations and musical programming, and a vibrant public plaza in the center of the project will welcome visitors from the neighborhood. 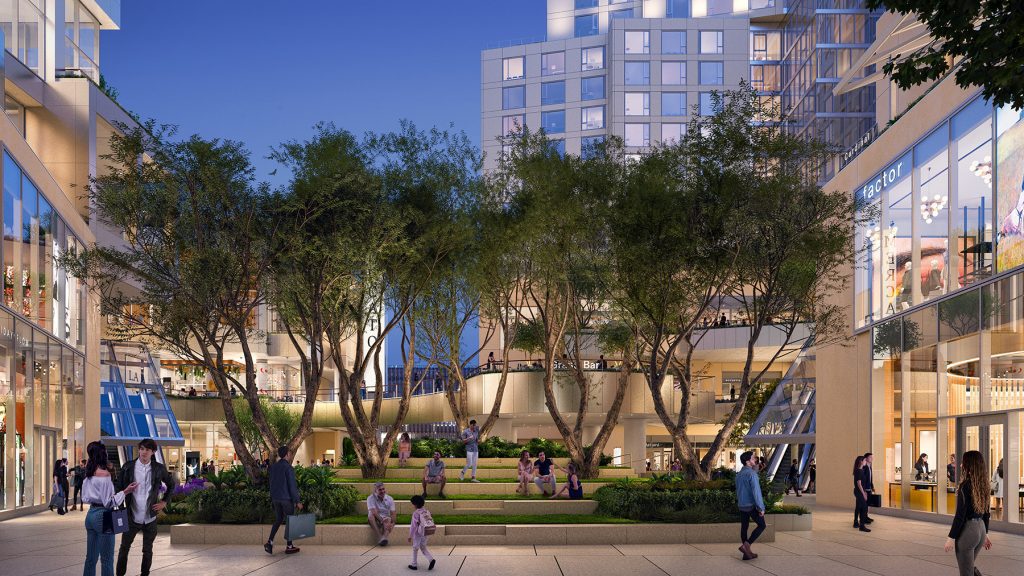 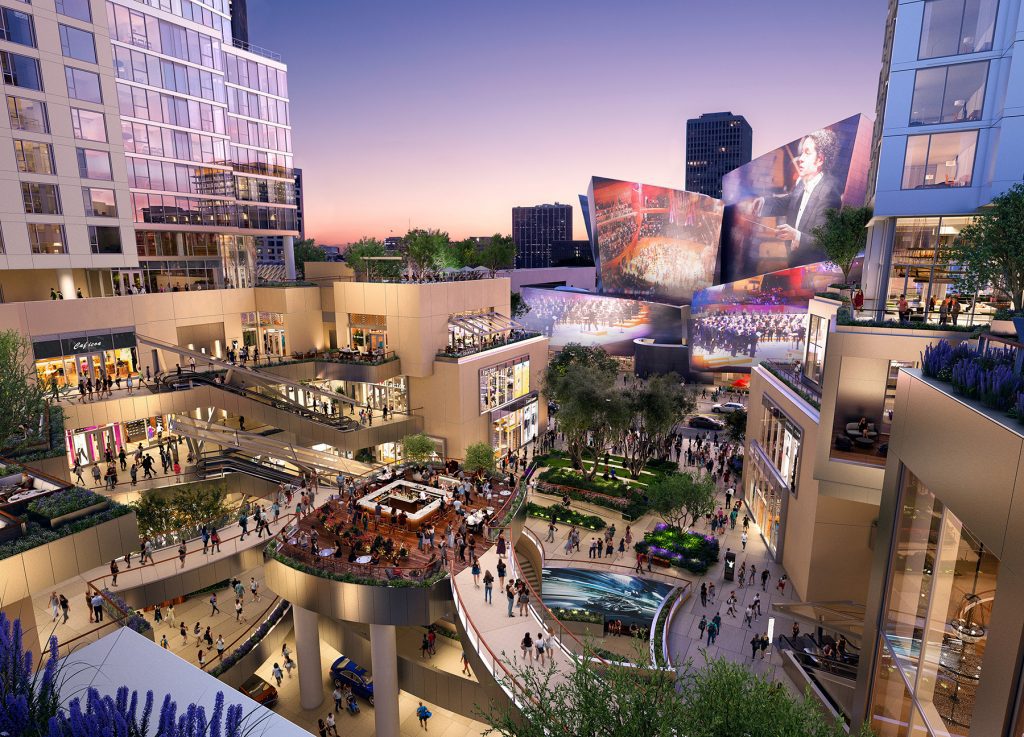 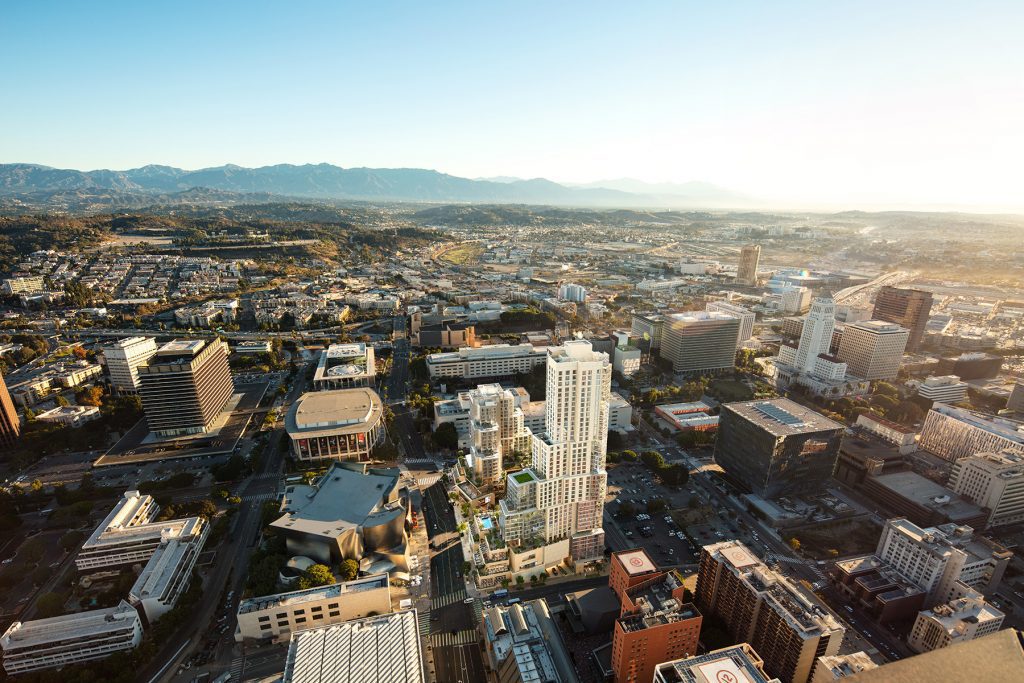 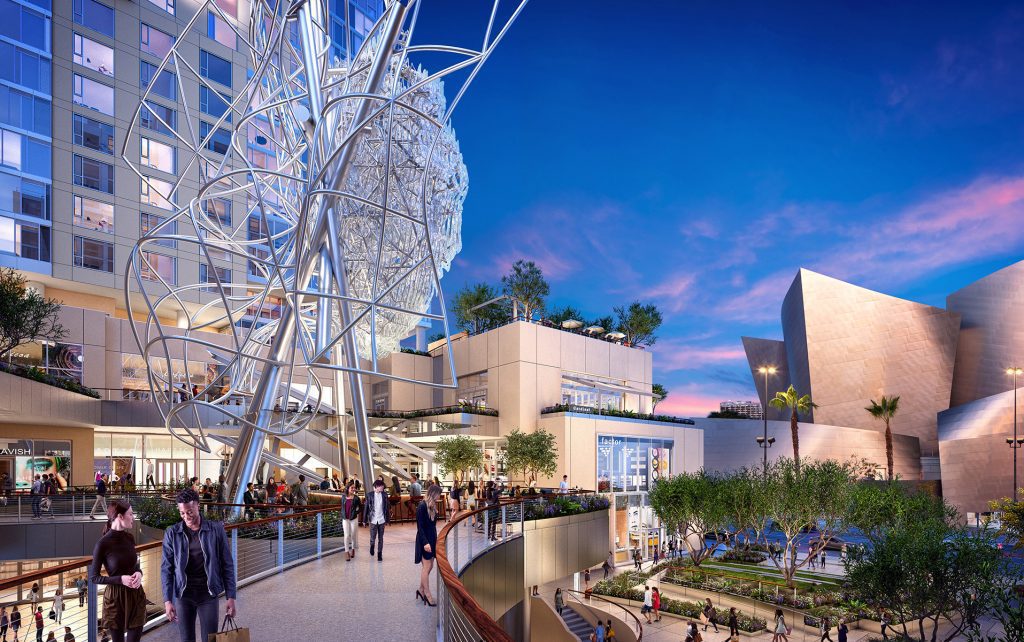 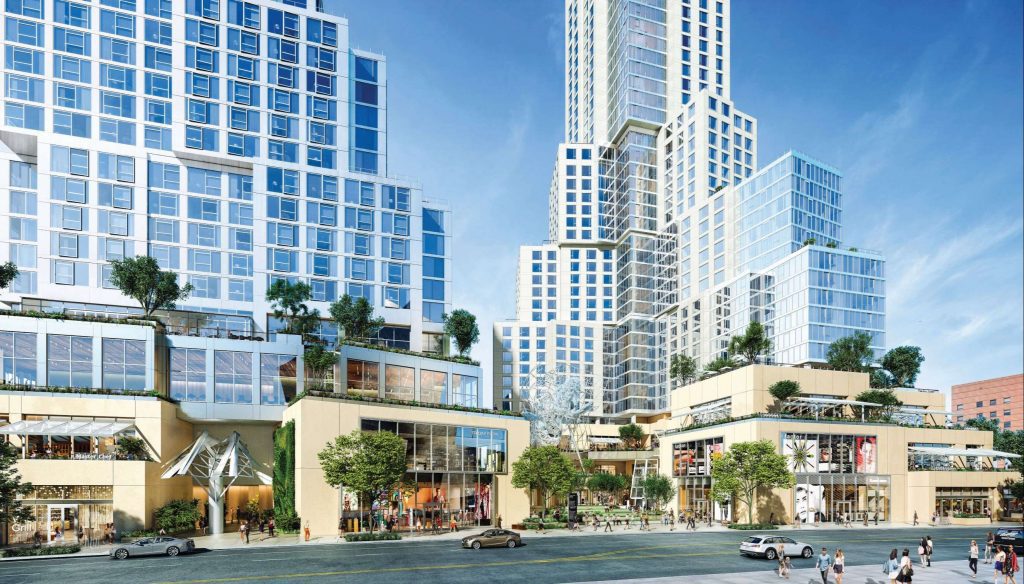 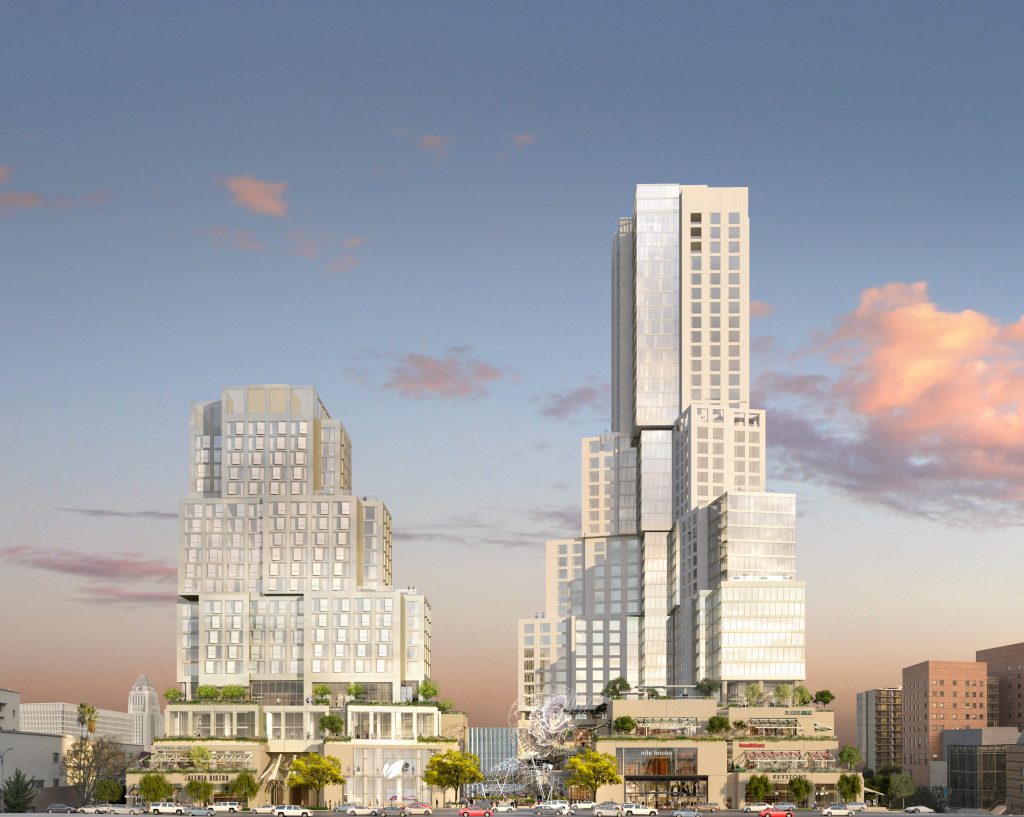 Vogel describes The Grand as a kind of “concierge desk for the neighborhood” which will draw people from around the city to downtown. For the Colburn community, The Grand will bring an influx of new retail and dining options, including full service and quick-serve restaurants and retail stores at different price points. The Grand’s 176,000 square feet of retail space spans three levels of landscaped open terraces. The Grand will also offer residents and visitors access to sustainable amenities including EV charging stations, on-demand electric vehicle car sharing, and over 150 bicycle parking spaces.

Green design is an important feature throughout the development. “We aspire to be the leaders in creating buildings and environments that reflect our standards towards sustainability,” said Vogel. The Grand exceeds energy efficiency requirements with high efficiency heating, cooling and hot water systems, LED lighting, ENERGY STAR equipment and appliances, and smart controls. Use of the city’s potable water supply is reduced through significant rainwater collection and reuse for irrigation systems and water efficient fixtures.

The Grand will also provide benefits to the larger Los Angeles community including an estimated 10,000 new jobs and much-needed affordable housing. Twenty percent of the residences will be affordable rate units. “We support the idea that the development project needs to give back to the community,” said Vogel, “We have a local hiring program that we’re very proud of which is shattering the targets for local residents. The fact that we’re able to create so many jobs shows the big economic impact of the project.”

From now until the opening in 2022, much of the work will happen inside the buildings. As students, families, faculty, and staff return to campus, they may be able to glimpse the exterior skin going up on the towers and landscaping appearing at ground level. When The Grand opens, Vogel hopes that it will be a driving force in bringing life, excitement, and activity back to downtown and the performing and visual arts institutions located there. “We want to be the project that’s out there saying, ‘Welcome back to LA, welcome back to downtown. It’s going to be everything we promised it would be and more’.”

Frank Gehry shared a similar wish. “If you can make the places where people want to come, where they get pleasure and hang out, then I think you’ve done something.”

Get a sneak preview: take a VR Tour of The Grand.