The 2022 Fortissima application window will open in December.

Fortissima has opened my eyes to so many possibilities for me and other people of color in music. Through all of our various sessions and workshops, I have gotten the opportunity to see new ways I can fit in and excel in the classical music industry. Fortissima local pilot participant, 2019

Now a national model, Fortissima will be a six-month experience for 10 young women that will include mentorship and virtual engagement and culminate in a weeklong residential intensive at the Colburn School in Fall 2021. The program is provided at no cost to participants. 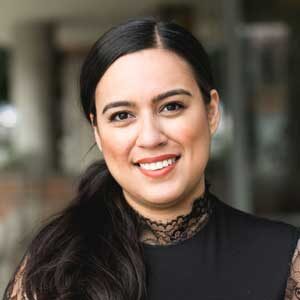 Named one of Musical America’s Top Movers and Shakers in the Performing Arts, Jazmín Morales is a violinist, activist, and administrator dedicated to helping young artists use their gifts to enact meaningful change in the world.

A classically trained violinist who also grew up playing mariachi and other regional Mexican music, Jazmín has spent her life and career navigating the space between classical and folk art traditions, and acting as a cultural translator between these worlds.

Currently, Jazmín serves as the Assistant Director of the Colburn School’s Center for Innovation and Community Impact where she founded Fortissima, an artistic and leadership development program for young women of color in classical music. She also recently joined the faculty of the USC Thornton School of Music Arts Leadership program where she teaches a graduate-level course on community engagement.

In addition to her work in conservatories, Jazmín is an arts leadership and community engagement consultant for NPR’s From the Top and the Smithsonian Latino Center. She proudly serves on the board of directors for the Little Village Foundation and the Inner City Youth Orchestra of Los Angeles (ICYOLA).

Jazmín has been the recipient of the Ralph M Parsons Arts Management Fellowship and was a member of the inaugural cohort of the Sphinx LEAD program.

Before joining the Colburn School, she was the Artist Services Coordinator at La Jolla Music Society. Jazmín earned her B.A. in Ethnomusicology from UCLA and M.A. in Arts Management from the Center for Management in the Creative Industries at Claremont Graduate University. 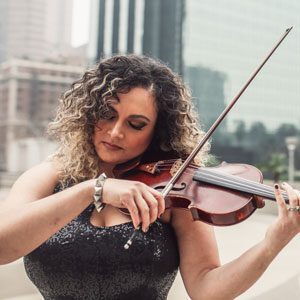 Grammy-nominated violinist Jannina Norpoth made her debut as a soloist with the Detroit Symphony Orchestra at age 14. Since then she has built a career as an innovative collaborative artist with a passion for contemporary music, genre bending and improvisation, a sought after arranger and orchestrator, and an advocate for a more inclusive and versatile landscape in classical music.

Ms. Norpoth has performed internationally, including appearances at the Women of the World Festival at The Apollo Theater, Detroit Art X Festival, Montreux Detroit Jazz Festival, Mostly Mozart Festival, Great Lakes Chamber Music Festival, Saturday Night Live, VH1’s Save the Music, IFC’s Dinner with the Band, and Ecstatic Music Festival at Merkin Hall. As a soloist she has performed with the Detroit Symphony Orchestra, Birmingham Bloomfield Symphony, Casalmaggiore International Chamber Ensemble, Ensemble 212, and Bachanalia Chamber Orchestra. Most recently during COVID-19 she has been a featured virtual performer for digital performances from The Kennedy Center, The Library of Congress and Living Music with Nadia Sirota.

She has been a featured performer alongside such acclaimed musicians as James Carter, Nadia Sirota, Regina Carter, Itzhak Perlman, Daniel Bernard Roumain (DBR), Helga Davis, Marcus Belgrave, Dave Young, Mike Garson, A. Spencer Barefield, Jay – Z, Beyoncé, Anita Baker, Sheila E., Boys II Men, Dionne Warwick, My Brightest Diamond, Alexi Murdoch, and many others.
Praised by Strad Magazine for her ability to write a transcription “so natural sounding that it could have been the composer’s original version.” Ms. Norpoth is a sought after arranger both in the classical and non-classical worlds. Recent commissions include Orpheus Chamber Orchestra, St. Louis Symphony, Sphinx Virtuosi, Trinity Wall Street and the Volcano Theatre Company’s new adaptation of Scott Joplin’s “Treemonisha”.

Ms. Norpoth lives in Bedford Stuyvesant, Brooklyn, with her husband John-Paul and their puggle Vegas. Upcoming projects include the world premiere of a new adaptation of Scott Joplin’s Opera Treemonisha, featuring a collaborative orchestration with composer Jessie Montgomery and commissioned by Volcano: an experimental theatre company based in Toronto, as well as a duo recording of Prokofiev’s Sonatas for violin and piano with pianist Maria Meirelles.

Fortissima began as a local pilot program in 2017 and featured a cohort of six young women from Los Angeles. Those young women are now pursuing studies in music and other disciplines in schools such as Oberlin, Stanford, and UCLA Herb Alpert School of Music. Findings from the pilot program informed the new model which will expand the program to recruit nationally and serve more students each year.

The program consists of two components, beginning online with innovative leadership curriculum and one-on-one mentorship, and culminating in a week-long residential intensive on the Colburn campus in Fall 2021. The curriculum and mentorship are tailored to participants’ unique perspectives and provide specialized approaches to both personal and professional development. During their time on campus, these newly acquired skills will be put into practice in a deeply engaging residency that provides opportunities to explore all facets of artistry, including performance, the conservatory experience, and career development.

From May through October 2021, participants will: 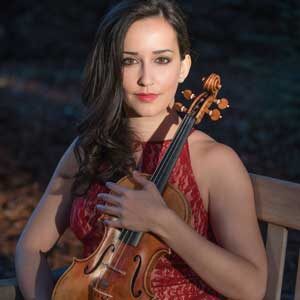 A founding member of the Catalyst Quartet, Karla Donehew Perez maintains a busy performance schedule throughout the United States and around the world. Born in Puerto Rico, Donehew Perez began playing the violin at age three and made her solo debut with the Puerto Rico Symphony at 9 years old. At age 12, her family moved to California where she continued her studies with Anne Crowden, director and founder of The Crowden School.

Donehew Perez completed her bachelors and masters degrees at the Cleveland Institute of Music, studying performance with the heralded violin teachers Paul Kantor, David Cerone, and William Preucil. She has performed as featured soloist with the Berkeley Symphony, Sacramento Philharmonic, San Francisco Chamber Orchestra, Oakland East Bay Symphony, Puerto Rico Symphony Orchestra, Sphinx Symphony Orchestra, Sphinx Chamber Orchestra, and the New World Symphony among others. As a chamber musician, she has performed with Orpheus Chamber Orchestra and collaborated with artists such as Joshua Bell, Zuill Bailey, Awadagin Pratt, Anthony McGill, Stewart Goodyear, Fredericka Von Stade, Garry Karr, and members of the Guarneri, Juilliard, and Takács quartets. Donehew Perez has been guest concertmaster at the Tucson Symphony and spent two years as a fellow at the New World Symphony, where she was often concertmaster or principal second violin.

Donehew Perez performs on a violin made in 2013 by renowned German luthier Stefan Peter Greiner, supported in part by a Sphinx MPower Artist Grant, and a fine violin bow by Victor Fetique on generous loan from the Rachel Elizabeth Barton Foundation. 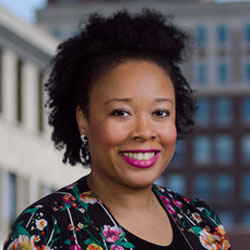 Jennifer Arnold joined the Richmond Symphony (VA) as Director of Artistic Planning and Orchestral Operations in the fall of 2019 to further her work in increasing representation on orchestral stages. Prior to her appointment, she enjoyed 15 seasons as a section violist with the Oregon Symphony and served as Director of Artistic Operations for 45th Parallel in Portland, OR. In addition to her work in Richmond, Jennifer finds immense joy as a faculty member of the Sphinx Performance Academy, performing with and serving on the programming committee for the Gateways Festival, and sharing the stage with Portland based string quartet mousai REMIX. She is a member of ASTA, Suzuki Assoc., AFM, the Urban League YPs and enjoys volunteering, mentoring, karaoking and traveling. 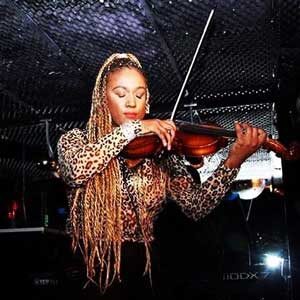 A dynamic violinist and entrepreneur, Stephanie Matthews is a modern-day citizen artist championing artistic excellence and social consciousness. She is the Co-Founder of the Re-Collective Orchestra, an all-black orchestra dedicated to raising the visibility and profile of black musicians and to present culturally relevant work to engage diverse audiences. Ms. Matthews is the former Director of Artist Development for the Sphinx Organization, cultivating the careers of some of the nation’s top Black and Latino artists through professional development initiatives, including the Sphinx Competition, Sphinx Soloist Program and the Sphinx Virtuosi tour. She has served as the Assistant Dean and violin faculty with the Sphinx Performance Academy and served as Artist in Residence at the National Academy of Performing Arts in Trinidad and Tobago. 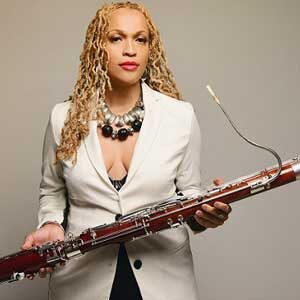 Bassoonist Monica Ellis is a founding member of the Grammy-nominated wind quintet, Imani Winds, who in their 23rd season, continue to make ground-breaking art while maintaining a vigorous international touring schedule.

A passionate teacher, Ms. Ellis has been a visiting professor or on faculty at The University of Chicago, The Hartt School (CT), Purchase (NY) & Brooklyn College Conservatories of Music, Mannes School of Music and The Juilliard School’s Music Advancement Program. Also, a renowned clinician, she has given master classes and solo recital performances across the country.
She serves on the advisory boards for Orchestra of St. Luke’s Education Committee and the Meg Quigley Vivaldi Competition & Symposium for Women Bassoonists of the Americas, as well as on the Board of Concert Artists Guild (CAG).

Ms. Ellis received her Bachelor of Music degree from Oberlin College Conservatory of Music, studying with George Sakakeeny. She received her Master of Music degree from The Juilliard School and Professional Studies Certificate from Manhattan School of Music in the Orchestral Performance Program, studying with Frank Morelli at both institutions.
Monica religiously watches Jeopardy!, loves home decorating and resides in the historic village of Harlem in New York City with the greatest joy of her life – her 6 year old son, Oden. 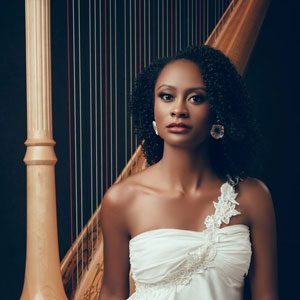 Harpist Angelica Hairston is known for her fiery performances and passion for social change. Throughout her career, she has made it a priority to create social impact through the power of the arts. In 2016, she founded the organization Challenge the Stats, a concert series dedicated to empowering artists of color and sparking dialogue about diversity, inclusion, and equity, both on and off the concert stage.

In addition to her work with CTS, Angelica currently serves as the Artistic Director of the Urban Youth Harp Ensemble where she provides free harp instruction to over 90 students at Drew Charter School in Atlanta, GA. She was recently celebrated as one of the youngest recipients of the 2019 Governor’s Awards for the Arts & Humanities, an award recognizing individuals who have made significant contributions to the state of Georgia’s civic and cultural vitality through excellence and service.

Angelica is a current member of the Sphinx Organization’s SphinxLEAD cohort and serves as a Specialist in the area of Education and Equity for NPR’s From the Top and Boston University Tanglewood Institute. She was a keynote speaker at the Woodruff Arts Center Educator Conference, was a member of the League of American Orchestras’ Essentials of Orchestra Management, and a panel moderator for SphinxConnect.

Angelica holds a Master of Music Industry Leadership from Northeastern University as a 2015 MLK Fellow and a Bachelor of Music from The Glenn Gould School of The Royal Conservatory of Music in Toronto, Canada where she studied with world-renowned harpist Judy Loman.

Explore the arts in Los Angeles

Attend panels and workshops on topics such as:

Gain access to ongoing alumni programming at conclusion of the program

We will be hosting two general information sessions open to any interested applicants who want to learn more about the program, get tips for your application, or have any questions answered.

The 2022 Fortissima application window will open in December.