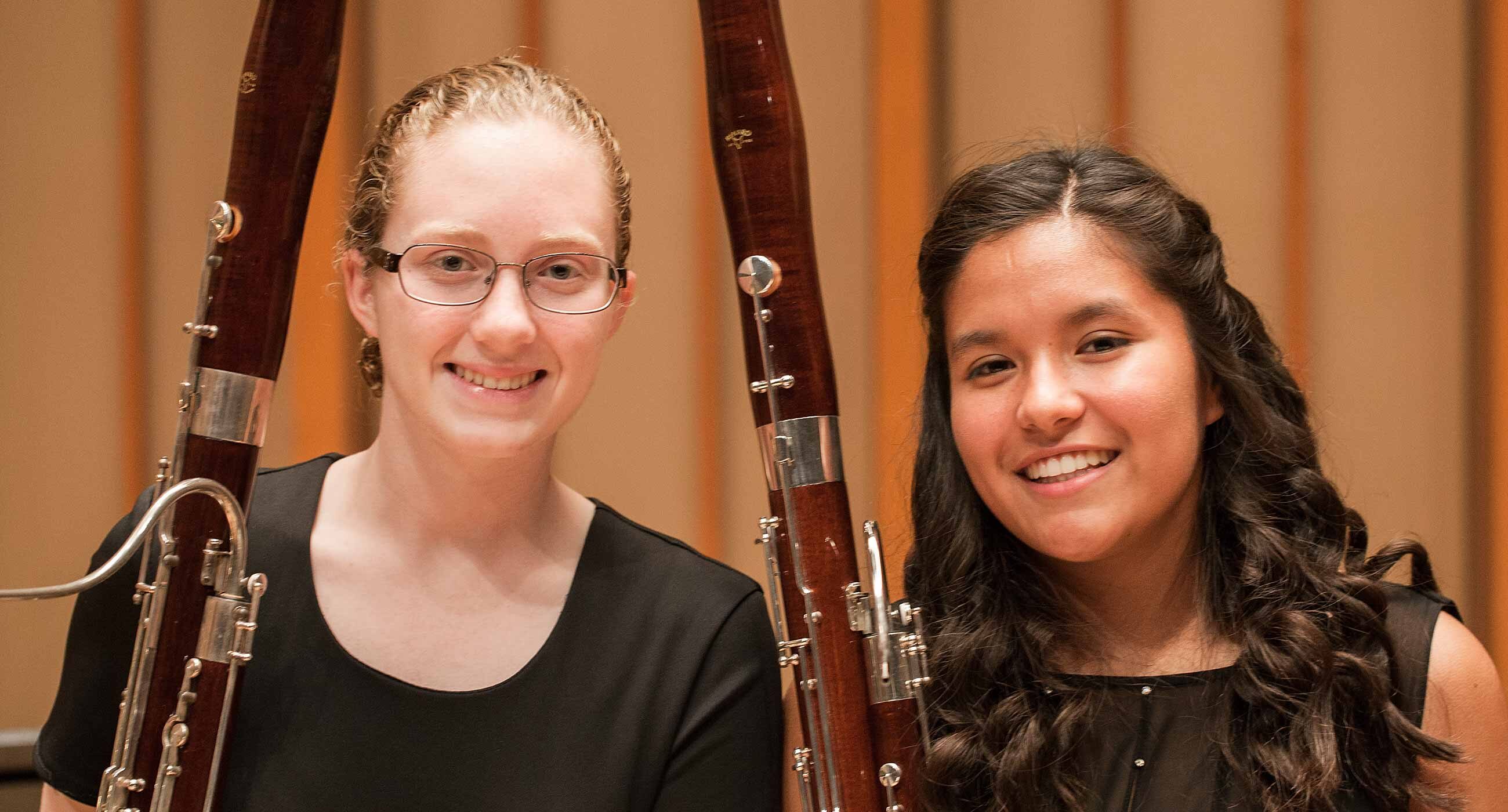 Elvia Perez (right), a former student in the Community School of Performing Arts Herbert Zipper Scholars Program, seed funded in 2013 by the Jack Kent Cooke Foundation, one of numerous meaningful synergies between the Foundation and the Colburn School

The Jack Kent Cooke Foundation is a national philanthropic foundation that has heroically supported the musical pursuits of young artists all around the country for the past 20 years. Both the Foundation and Colburn believe strongly in access to excellence and are dedicated to advancing the education of exceptionally promising students despite their socioeconomic status. Together, we have proudly partnered to enhance the lives of young people through performing arts education.

With the belief that high-potential, low-income students will excel when given the resources to develop their talents, the Jack Kent Cooke Foundation supports outstanding students from 7th grade to graduate school through scholarships, grants, direct service, and knowledge creation and dissemination. Founded in 2000 by the estate of the late businessman and radio commentator Jack Kent Cooke, the Foundation has awarded over $222 million in scholarships to nearly 2,800 students and has provided $115 million in grants to organizations, including the Colburn School.

While the Zipper Scholars program is illustrative of our shared commitment to access in the Community School, our shared vision does not stop there. The Foundation has supported Colburn students in many other ways. Numerous Colburn students are Jack Kent Cooke Young Artist award recipients. This program provides a $10,000 scholarship to 20 outstanding young musicians nationally. Many of the Jack Kent Cooke Young Artist awardees have gone on to continue their education in either the Colburn Music Academy, the Community School of Performing Arts, or the Conservatory of Music. The Foundation also supports students, including Colburn’s own Charlotte Marckx through its Cooke College Scholars program, which provides up to $40,000 to 120 students nationally each year.

Jack Kent Cooke scholars are celebrated not only for their talent but also for giving back. These classically trained young instrumentalists, vocalists and/or composers are also active in community-service projects and academic pursuits. A natural synergy exists here with Colburn’s Center for Innovation and Community Impact, the School’s community impact programming, and teacher training. Charlotte Marckx, Conservatory of Music, completed a project this year called “The Pursuit of Mastery.” The project focused on developing a new mindset that centers on the idea of embracing the process of improvement as a part of a lifelong quest for perfection. She believes that this “betterment mindset,” can empower learners in all fields to challenge themselves and measure their own progress and successes by an internal ideal of mastery, leading to greater effectiveness and self-satisfaction.

The influence of scholarship support over the years cannot be underestimated. One of Colburn’s first year Herbert Zipper Scholars program graduates, Jacqueline Brown-Gaines, received scholarship funds and a UNCF Mellon/Mays Undergraduate Fellowship while at Spelman College, and is presently pursuing her doctorate in history from the University of Southern California. Elvia Perez, also a Herbert Zipper Scholar, is pursuing two degrees from Brown University in Business, Entrepreneurship and Organizations (Business Economics) and Political Science. At Brown, she was awarded the Social Innovation Fellowship award three years in a row. In addition, Herbert Zipper Scholar Kevin Kim, recently earned degrees from Georgetown University in Neurobiology and Political Science.

Like the Colburn School, the Jack Kent Cooke Foundation believes that supporting young individuals not only contributes to the musician but to the individual as a whole. The Foundation has helped pave the way for students at the Colburn School whose lives have been changed immeasurably through their time here. We are all immensely grateful that the Foundation is a part of our community.