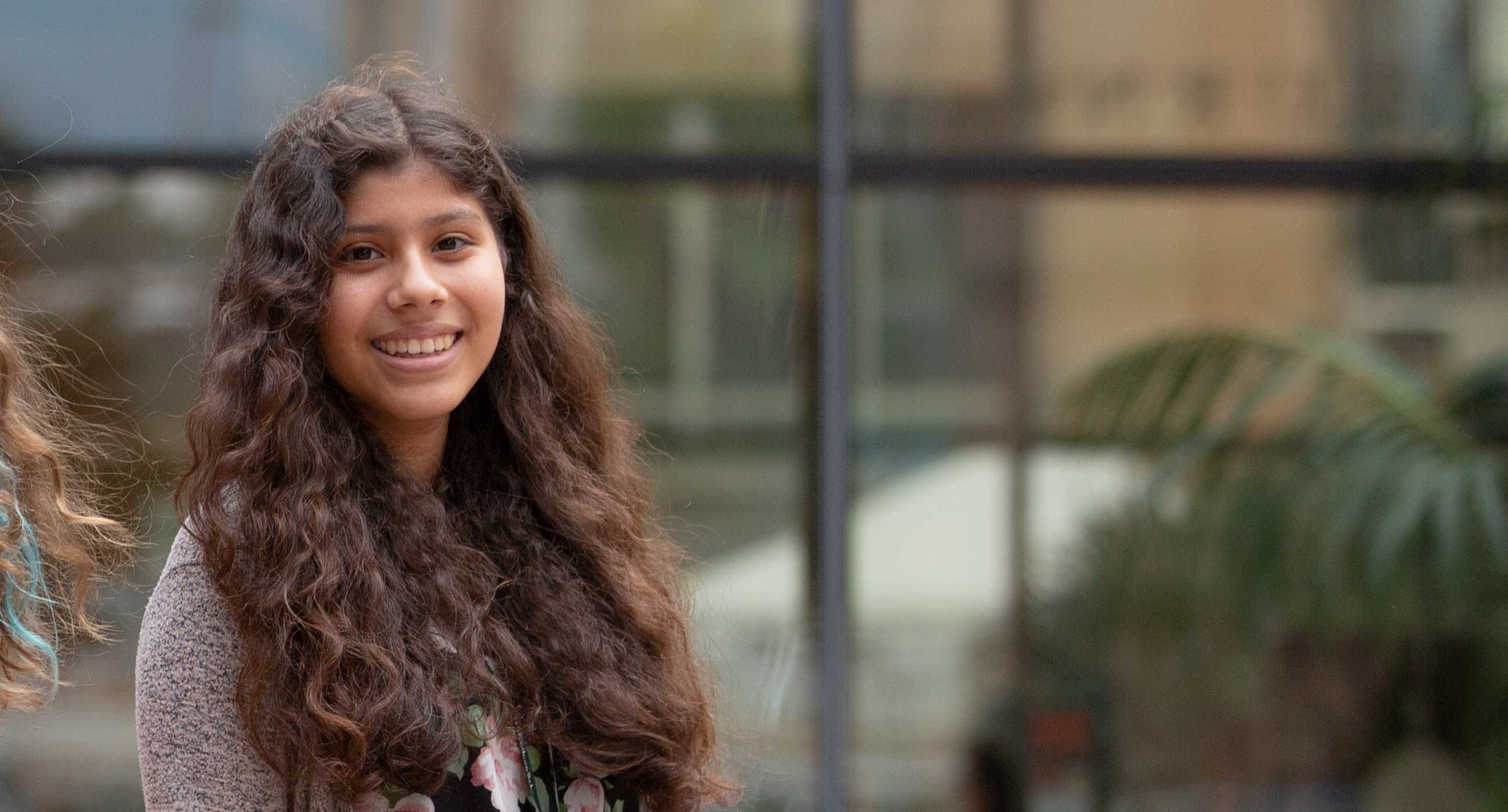 Although nothing can replace the energy of being in a room filled with musicians and singers, Community School alumna Sarai Benitez has been able to connect with online like-minded people after participating in Eric Whitacre’s Virtual Choir 6: Sing Gently.

Tell me a little about yourself. What is your art practice like? What is your connection to Colburn?
My name is Sarai Benitez, and I am a rising junior at Cal State Northridge studying music therapy. I was first introduced to music as a young child in elementary school through orchestra, choir, and mariachi.

During the summer before 5th grade, I was one of the lucky participants of Summer Encounter, a two-week camp that Colburn has in the summer for local elementary students of Title I schools. Through that, I received a scholarship which granted me access to Colburn until I was 18. At Colburn, I was able to take guitar lessons and private violin lessons and was a part of the Children’s Concert Choir and Chamber Singers.

In high school I tried to do as much as I could, from joining musical theater, choir, jazz choir, and orchestra, to even singing the national anthem at our football and basketball games. Now in college, I’m continuing with choir and participating in ensembles with my instruments as well.

How do you think attending Colburn shaped you as a musician? Specifically, how did you get into music therapy from your Colburn experience?
In elementary school, I was participating in choir and orchestra, but I wasn’t as outgoing as I am now. That didn’t really pop up until I started to go to Colburn. It was a strange thing. I would go to Colburn on the weekends and I’d be very outgoing there. Then I’d go to middle school and I was very shy and quiet.

It took me awhile to bring that into my regular school life and participate in their art programs, because in my middle school, we didn’t have an orchestra or a very strong theater program. It wasn’t until high school that I got the chance to get into it more. Colburn gave me a chance to explore that side of me. Colburn kept me going back [to music], because I had that access during the weekend. Colburn was and is a sanctuary for me.

What generated your interest in participating in Eric Whitacre’s Virtual Choir 6: Sing Gently?
I knew of Eric Whitacre and his virtual choirs before, but I was very scared of the idea of recording myself. I had never tried to participate, but ever since we were required to go to school online, I was pushed into recording myself to do my voice lessons and participate in all my music classes. After I was interviewed by Dean Nate Zeisler during Summer Encounter about the virtual choir, I felt very encouraged. I was like, “Okay, I’m already in this weird bandwagon, might as well just push into it.” That encouraged me for sure.

Because we’re now in a place where we need to connect with other people virtually, do you think that the choir has become a tool to connect with people in addition to being an interesting art piece?
I went into this project thinking of it as an art piece alone, but came out with a newfound community. Within the website, there’s a blog where you get to share things with the other choir members. There’s also the Think Tank, which I got to participate in, where they feature interviews and resources connected to the choir… I think at first people go into it thinking that the choir is just a way to use your art, but then they come out with this community too.

Can you elaborate a little bit on your participation in the Think Tank?
Of course. As I said before, Dean Zeisler was facilitating these interviews through Colburn for Eric Whitacre’s Think Tank. He interviewed me asking about what majoring in music therapy was like and about my thoughts on the virtual choir, especially during these times. The interview was the thing that encouraged me to participate in this choir and share it with all my friends.

I had mentioned in the interview with Nate that my last performance was Beethoven’s Ninth Symphony performed with the CSUN String Orchestra and a whole bunch of choirs from all over the Valley. At the end of the performance, I was left on such a high from the beauty that is performing live with so many people.

It was only a week after that we were told we had to go back home and finish the semester online. For a music major, the news was devastating. The realization that I didn’t know the next time I’d get to experience that feeling made me even sadder. So now, to be able to find something else and participate with even more people became such an exciting project that I really wanted to participate in any way possible.

What do you think the purpose is of projects like this, generally?
I think it’s to connect people and help others understand that they’re not alone, because when it comes to this stay at home order, a lot of us go into self-isolation. We were required to return home after being in school for not even a whole semester and have to face having our newfound freedom [as a college student] taken away. It is especially hard for those in their adolescence and teenage years. I’m lucky to have music to go to, but others don’t. I think it’s very helpful for those individuals who are looking for a place to find a group of people like them.

Do you think that virtual ensembles like this are a good alternative for the music community while we can’t gather together in person?
I do think so, but also I hope that we’re not going to be stuck like this for long, because nothing’s going to replace that feeling of being in a room filled with musicians and singers and feeling that raw energy. This is doing well for now, but I’m waiting for that day that I can go back to school and to my ensembles and experience performing in person.

Do you think that this choir specifically helped broaden your horizons to live recordings, or was it another step on the path for you?
I feel like it was a step on the path because I’ve been camera shy for a while. I’ve done a few video auditions, but the idea that this was going to be a public YouTube video and you might just catch my face for a second—I was really nervous about that. But it’s one of those steps that’s helping encourage me that it’s okay; that you should be proud about sharing your art.

As a final question, for readers who aren’t familiar with Eric Whitacre, is there anywhere that you suggest they start listening?
I have a favorite song I got to perform in the Children’s Concert Choir at Colburn. I always think that people should hear that song first, because it really shows the wonder that Eric Whitacre puts into his music. It’s called Seal Lullaby. That’s something I always share with my friends when I start talking about Eric Whitacre.

When you get into the music world, his name is so big. I feel like my knowledge is barely anything compared to my classmates. It’s weird—we just learned about him in my music history class too, so around the same time that I was reading about him I was participating in the choir. It feels like I’m making history.