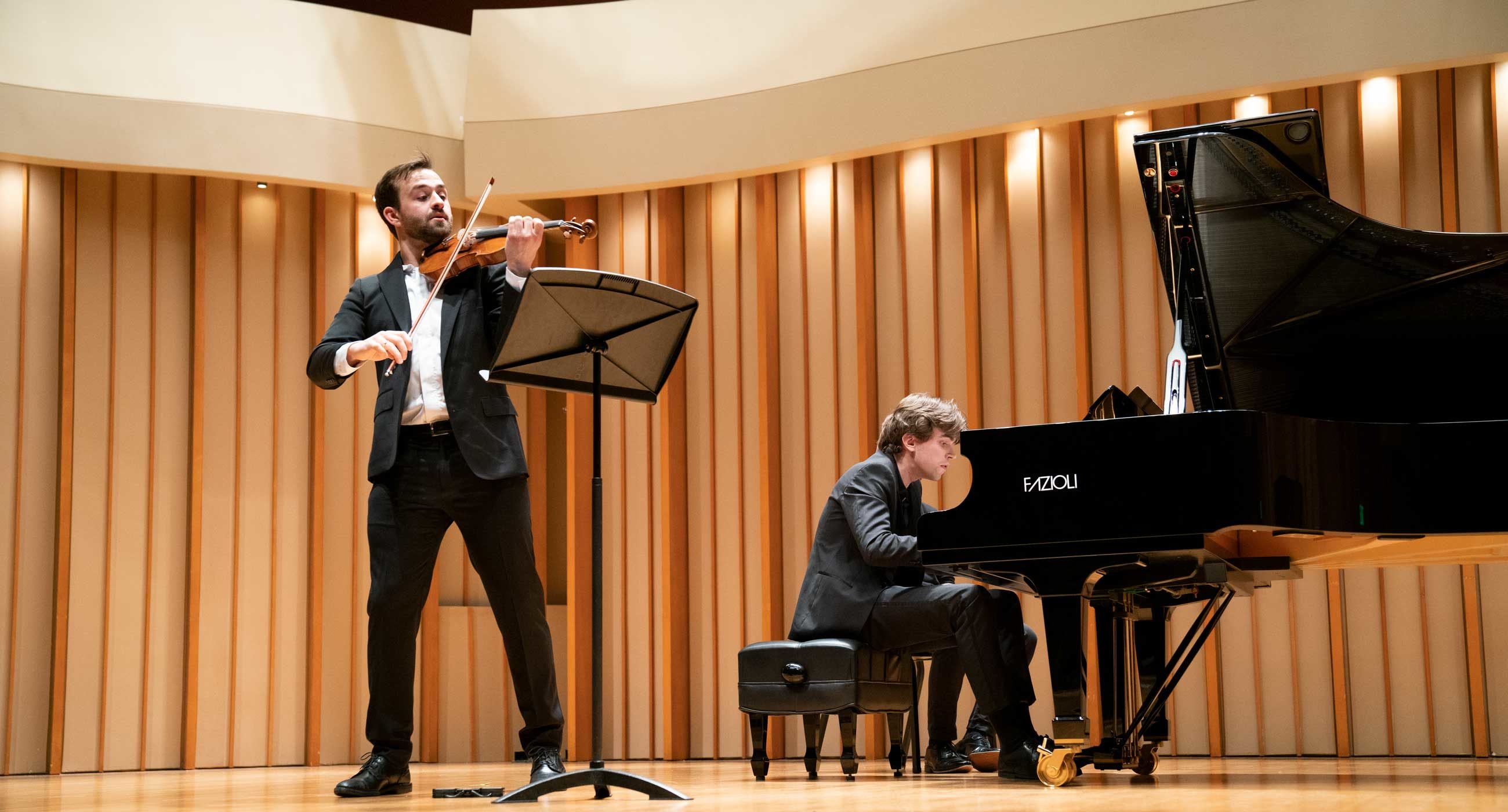 William Hagen and Albert Cano Smit performed their debut album Danse Russe in its entirety at an album release concert in late February.

For violinist William Hagen and pianist Albert Cano Smit, life after Colburn has been a big adjustment. The pair, who met as Conservatory students, have moved away from Los Angeles, continued their education, debuted in new cities, and developed professional careers as musicians. Most recently, they’ve topped off their list of accomplishments by recording and releasing their own album, Danse Russe, accompanied by an album release concert at Colburn in late February.

Besides looking for a challenging and exciting project to propel his career forward, Hagen found himself in need of an easily shareable and tangible product he could use to explain his profession. “You take an instrument on the plane, and people are like, ‘Oh, what’s that on your back?’” he described. After telling them that it’s a violin, the conversation typically continues: “’You just going for a family reunion or something?’ No, I actually do it professionally. ‘Are you on iTunes?’” And then the conversation, typically, ends. Hagen considered Danse Russe as a business card of sorts.

When the two paired up for the project, they decided to produce and market the CD completely on their own, which gave them a blank slate and complete artistic control. They initially debated whether to showcase pieces that hadn’t been recorded before or trying to read the tea leaves of industry trends. Ultimately, it was most important to them to share “really, really good” music that they love to perform.

Around that time, they began noticing natural narratives emerging in the music they were working with, and in particular, a mirroring they saw between Igor Stravinsky and Sergei Prokofiev. Stravinsky and Prokofiev were both prominent Russian composers and contemporaries in the early 20th century, and both collaborated with the legendary Russian ballet impresario Sergei Diaghilev, founder of the Ballets Russes in Paris. They also both drew on folk music and tales, which introduced a sense of the fantastic and exotic in their works while still remaining accessible to their audiences. Hagen and Smit focused on the ways these composers played with narrative, dynamics, emotion, and form to assemble a similarly exciting and accessible track list.

The final track listing includes Stravinsky’s Suite italienne, Divertimento, Chanson Russe, and Danse Russe; and Prokofiev’s Violin Sonata No. 2, Two Pieces from Tales of an Old Grandmother, and March from The Love for Three Oranges Suite.

Aside from being able to curate the content of the album, having complete control of the production process also meant that Hagen and Smit had to learn on their own. They discovered the world of music rights, licensing, project management, and more.

Unbeknownst to them when the program came together, neither Prokofiev nor Stravinsky’s works are in the public domain, which in classical music generally means that intellectual property laws have expired. Hagen and Smit’s first foray into the complex world of music publishing was a baptism by fire. They ran into procedural and cost barriers along the way, including securing mechanical licenses from publishers for each audio track on the CD and then synchronization licenses for any use of video footage containing the work. “To say it’s been stressful has been such an understatement,” Hagen shared.

Fortunately, Hagen and Smit shared a sense of realism and dedication throughout the process that paid off when they officially released their album on February 22, kicked off by a breathtaking performance of the album in its entirety at Colburn. They see Danse Russe as a distillation of their musical values and a way for them to illustrate the art of classical music. “I think the closest art to our own is acting,” explained Hagen. “It’s interpretation of text, telling a story to an audience. And that’s what we want to be doing, is telling a story.” The pair are planning more performances in Europe later this spring, seeking to share the album far and wide.