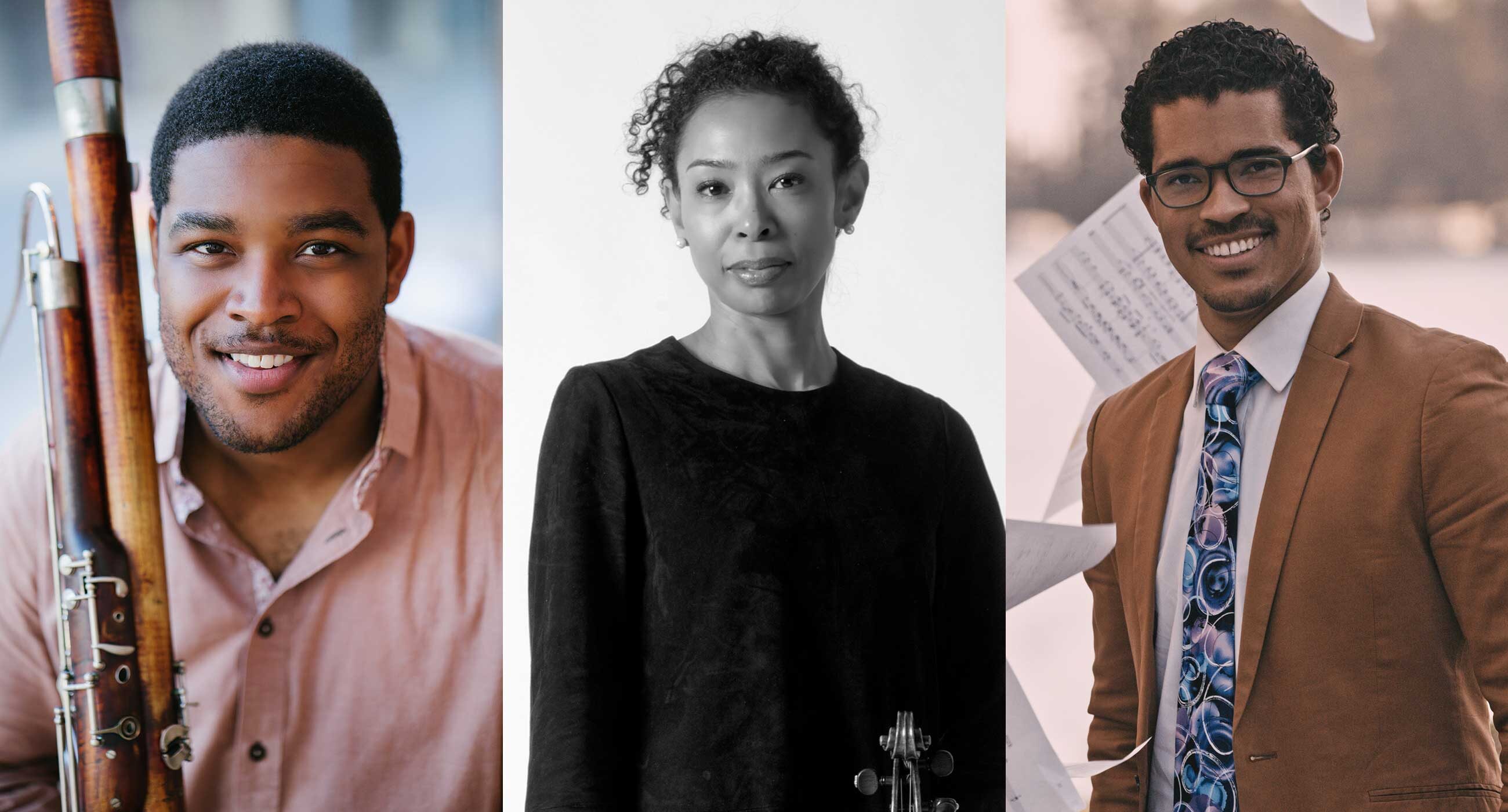 Alumni artists of the Amplify Series share their perspectives about the performing arts and social justice.

Dr. Martin Luther King Jr. is known for his powerful social justice work during the landmark Civil Rights Movement of the mid-twentieth century, and the work he led in the segregated South continues today across the world. The federal holiday established in his honor has evolved from a quiet day of remembrance into a call to action, and that call extends to every arena of human life. In the performing arts, this call is especially impactful. Culture is a key driver for social change, and the Colburn community joins in answering the call.

As part of a number of new initiatives across campus that touch on curriculum, training, and performance, Colburn’s Amplify Series will include week-long residencies by artists of color that will include master classes, lectures, and work with current students and community partners. The goal of these efforts is to amplify these artists as well as the artists that they’ve drawn inspiration from in their own work, and the inaugural class includes violist Nokothula Ngwenyama (Community School ’93), bassoonist Andrew Brady (Conservatory ’13), bassist Marlon Martinez (Conservatory ’15), and former New York City Ballet member Silas Farley.

Watch a virtual roundtable with the 2021 Amplify Artists


Last fall, the alumni of the cohort discussed their thoughts on the social justice work to be done in the performing arts, from celebrating the work that’s already been done to envisioning a better future for the arts and setting out to achieve that vision.

The performing arts community has always been an active participant in social and political conversations, but some members of the community have been overlooked or omitted. One piece of the puzzle lies in finding ways to amplify those voices that have historically been silenced or continue to be drowned out.

Bassist Marlon Martinez spent his time as a student in the Conservatory of Music perfecting his classical technique on double bass, but he also found himself immersed in the jazz scene in Los Angeles through the young musicians in the Community School of Performing Arts. Marlon has focused his residency on uplifting Black jazz composer, Billy Strayhorn:

“Strayhorn was a legendary black American pianist, composer, and arranger of the 20th century. Although he was a pioneer in modern jazz, he deserves far more praise than what was given him, and even today he is underrecognized. I’ve loved Strayhorn’s music for a long time, and his style resonates strongly with me. I grew very interested in his life story while discovering bodies of work that was uncredited in his lifetime, often misattributed to his collaborator, Duke Ellington. At Colburn, I’ll introduce known and lesser-known Billy Strayhorn contributions to American music and civil rights.”

Bassoonist Andrew Brady is currently principal bassoon at the Atlanta Symphony Orchestra and a regular guest at summer festivals. For his residency, he is looking at the possibility of a recording where the focus is on those who have inspired him:

“I’m still working out what that’s going to look like, but I know that I do want to feature music by composers of color. I’d like to feature music by a woman composer…I want it to be about musicians of color [and women] in the classical music world in general, to bring more attention to the work that is being done and has been done.”

A second piece of the puzzle lies in the awareness that the story is ongoing. Music and dance are often viewed as historical and cast, but in fact, they are responsive, evolving with the world they exist in. Pieces that were once controversial are now canon. With that awareness, artists can begin to ideate the kind of landscape they want to help create.

Violist Nokuthula Ngwenyama (Community School ’93) recently composed a piece inspired by Martin Luther King Jr. entitled “Finding the Dream,” which will debut next month. She was a student of one of Colburn’s founding faculty members and supporters, Dr. Herbert Zipper himself, the namesake for the school’s main concert stage, Zipper Hall. In her interview during the So, How’s That Going? alumni podcast, she encouraged those in the performing arts to freely conceptualize the conversations they want to see in the field:

“If people actually want to bring compelling programming and push their audiences a little bit, this is the time to do it and to not be afraid. I actually think there’s a hunger amongst the general public for that education. It’s just imagining what things can be and starting to mainstream things that have been pushed out to the fringe because, quite frankly, of the systemic racism within the field.”

On a similar note, Andrew hoped the community would embrace a more inclusive understanding of art as part of a vision of growth and forward motion:

“There are so many cultures around the world and so many styles that we can learn and grow from. And it enriches our own playing when we learn those styles and have that dialogue with composers about how they envision a piece going based on their cultural heritage. It just enriches our music making. So, not only does the community miss out on that if we don’t do it, but the musicians miss out on it.”

There may be many other steps in assembling a diverse and inclusive puzzle, but perhaps the most crucial piece is understanding that putting ideas into action, even on an individual level, is what will lead to change.

Nokuthula reflected on the excitement and energy around social justice that had emerged in force during the summer of 2020 and pushed many to begin reflecting deeply and resolving to do more:

“There are a lot of great intentions out there right now, and I love hearing about them and talking about them. But then we have to actually put it into action and start collaborating with each other…to really try hard to invite a diversity of approaches to the field.”

In light of his own experiences and periods of reflection, Marlon experienced a renewed sense of purpose in his work:

“As an artist of color, I feel an even stronger calling to express my roots in Black American music, in light of the racial injustice and violence that exploded [last] year. I see the times as an opportunity to present myself, to uplift souls through my art, and to get more people to recognize the dignity of all people. I’ve felt hurt, seeing the suffering of people who have been tortured and killed because of the abuse of leadership and police brutality. I’ve cried while reflecting on personal experiences where I was treated differently, or being threatened, on account of being Black. This is why I keep making Black music: it’s a call for freedom, justice and equality.”

Nokuthula spoke about her commitment to writing as the culminating act of this cycle that begins with understanding the world as it is, imagining where it’s going, and then bringing it into existence:

“I work with all of my students on writing when we do concertos. They need to write their cadenzas…because when you write, the writing is the synthesis of everything that you’ve read and everything you have learned…You don’t fully absorb it until you try to express it in your own way, infused with your personality…Students need to have real agency…Everything they are doing right now is valid as part of their art. It’s about making music and sharing. And sharing the drive without compromise.”

Subscribe to the So, How’s That Going? podcast to hear more from Colburn Alumni.

Read more about Colburn’s commitment to Equity, Diversity, and Inclusion and our initiatives in that effort.