Anthony Gonzalez Has His Shining Moment in Coco 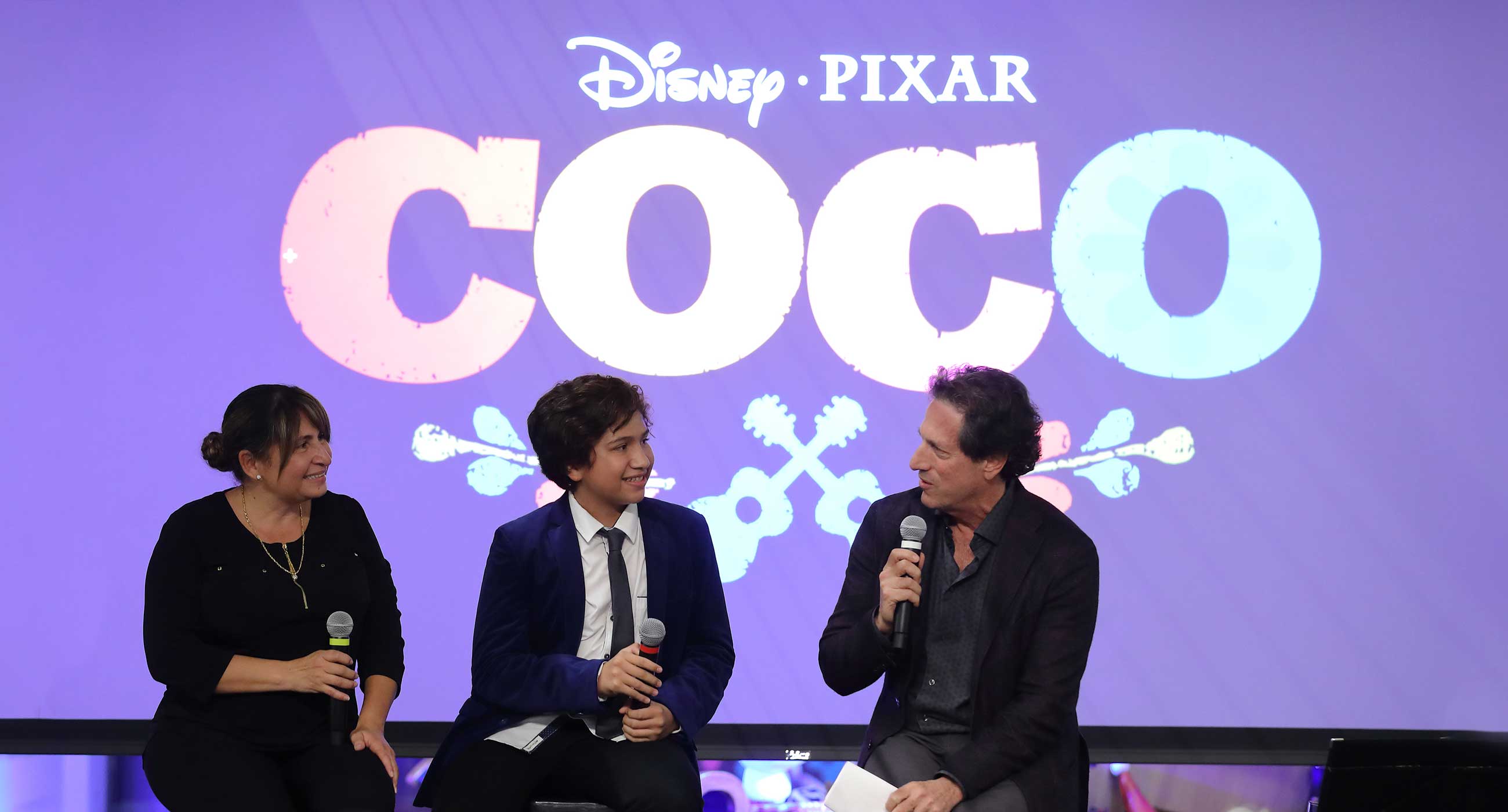 Community School student Anthony Gonzalez voices the lead character Miguel in Coco, the new animated film from Pixar Animation Studios that comes out this Thanksgiving. Anthony and his mother Lilian share their story with Andrew Millstein, President of Walt Disney Animation Studios and Chairman of Colburn’s Board of Directors.

There’s a defining moment in Disney-Pixar’s new film Coco, where the lead character, Miguel Rivera, shouts from a rooftop, “I’m going to be a musician!”

It’s a declaration that not only sets the course for the character’s journey, but also rings true for Colburn Community School student Anthony Gonzalez, who was cast to voice the lead character of Miguel, in his first ever major film role.

Anthony originally provided the scratch track (preliminary voice tests) for the animators to work with when they set the animation to dialogue and songs. Anthony was doing such a wonderful job, the Pixar team decided to cast him in the leading role.

“The director, Lee Unkrich, gave me a Christmas present. I opened it, and it was this beautiful piece of art that said, ‘You got the part!’ I was so excited that I just fell to floor!” recalls Anthony. “I just never thought I would be in a Disney-Pixar movie. I love Toy Story and so many other Pixar movies. It’s just a dream come true.”

Coco showcases the beauty of Mexican culture as it tells the story of a boy stuck between the worlds of the living and the dead during the celebration of Día de los Muertos. But at the heart of the film is a story about what it means to be a family.

“I didn’t really need to get into character because I identify with him,” says Anthony. “We both love music, and we both have a big family. I also love to celebrate Día de los Muertos with my family. It’s a joyful celebration and a time to connect with and remember your ancestors.” 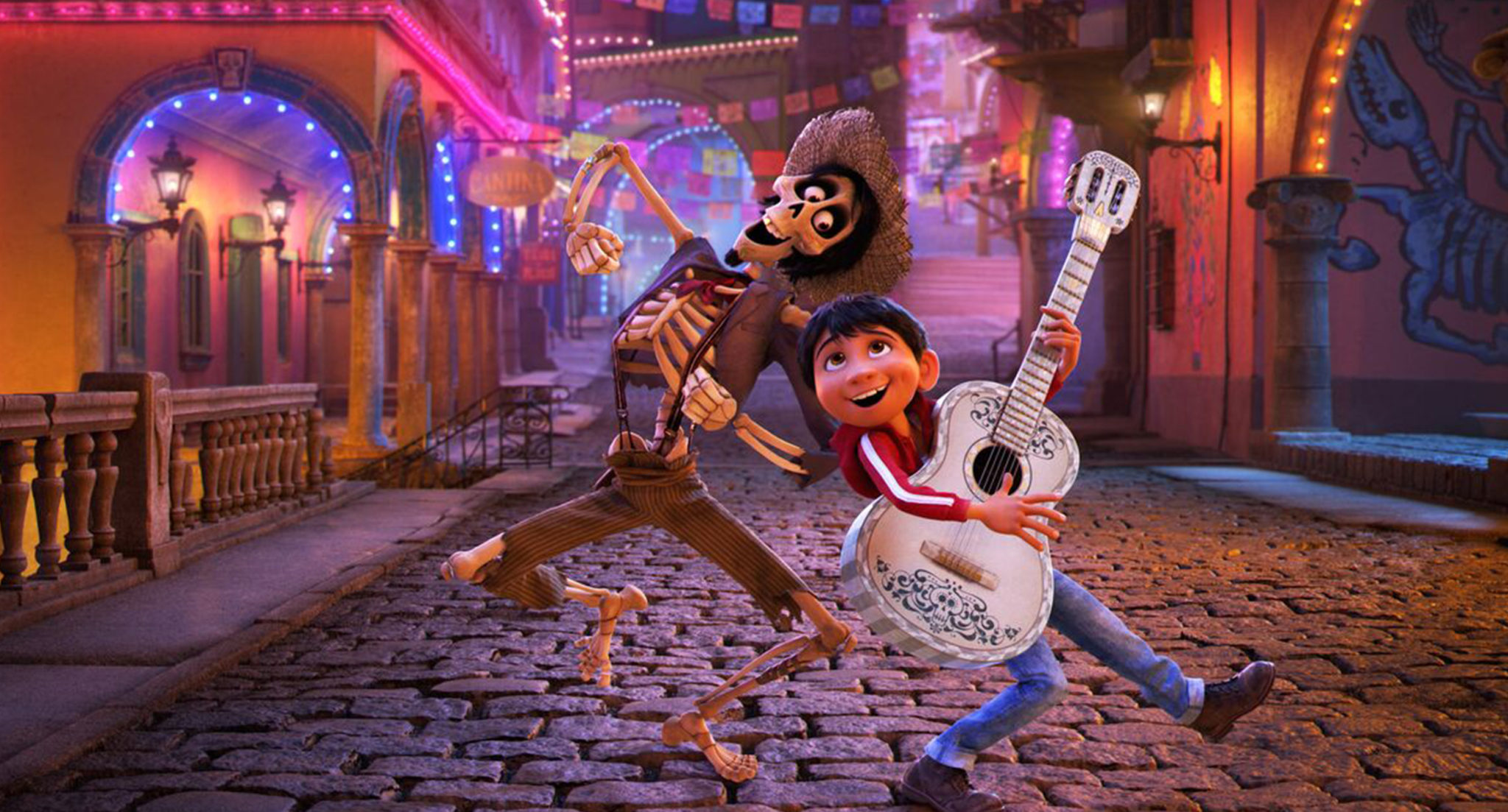 Music has always been a part of Anthony’s life, and his parents greatly value arts education for their children. From a very young age, Anthony would join his parents, two brothers and two sisters, to sing mariachi at El Mercado de Los Angeles in the Boyle Heights neighborhood of Los Angeles. At that time, the Mercado was owned by Pedro Rosado.

“Mr. Rosado would hear Anthony sing, and tell me, you should enroll your son in Colburn. He has talent,” says Anthony’s Mom, Lilian. “I didn’t take action right away, but over time Mr. Rosado kept encouraging me, and encouraging Anthony and all of my kids, to go to Colburn. I just didn’t think it was possible, but I often thought about it. Then I finally reached out to Colburn School, and realized, this is how I can support the dreams and passions of my children.”

Anthony echoes his mother, “Colburn School makes me feel like it’s possible to pursue my passions, singing, dancing, acting, guitar, everything! It’s a place where everyone, all different kinds of people, can pursue their talents and reach their potential.”

Anthony’s talent blossomed at Colburn, and Anthony and Albert’s voice teacher, Dr. Rose Beattie, recommended both boys for the Herbert Zipper Scholarship, a competitive program for students with high potential and financial need. With Dr. Beattie’s encouragement, as well as Community School Administrative Assistant and Student Services Coordinator Diane Cano-Casas, Anthony’s Mom applied and both Anthony and his brother Albert were accepted into the program. Through the Community School’s financial aid program, Anthony has studied guitar with Kenton Youngstrom; sang in a choir with Dr. Misha Shtangrud; and enrolled in a Singing and Acting class led by Dr. Rose Beattie and Lea Floden. After working with Anthony in this class, Dr. Beattie felt he had enormous potential and recommended that he enroll for private voice lessons, which Anthony began in January. With the support of the Herbert Zipper Scholarship this fall, Anthony has not had to choose one course each semester anymore, but is now enrolled in private voice instruction, musical theater, music theory, and Young Men’s Chorus all at once.

“With five children focused on pursuing careers in the performing arts, the Colburn scholarships and financial aid are vital to ensuring that each child can freely pursue opportunities that nurture their talents. We are so grateful to be a part of the Colburn School family,” say Lilian.

Anthony’s ambitions seem limitless when asked about the future. He plans to continue his studies at the Colburn School, with the hopes of building a successful career as an actor and musician. One of the greatest lessons learned during the making of Coco is best expressed by one of the central characters in the film, Miguel’s great great grandfather and idol, Ernesto De La Cruz: “Never underestimate the power of music. No one was going to hand me my future, it was up to me to reach for my dream, grab it tight and make it come true.”

Support students like Anthony achieve their dreams with your gift to the Colburn School’s Access Fund. Your gift will fund need-based scholarships in the Community School of Performing Arts.

Update on March 5, 2018: Since this article was published, Coco has grossed $739 million worldwide, receiving widespread critical acclaim. It earned Academy Awards for Best Animated Feature and Best Original Song, “Remember Me,” at the 90th Academy Awards. The film and the also won accolades at the BAFTA Awards, Critics’ Choice Awards, Golden Globe Awards, and more, and was chosen by the National Board of Review as the best animated film of 2017. Learn more about the film the Coco official site.