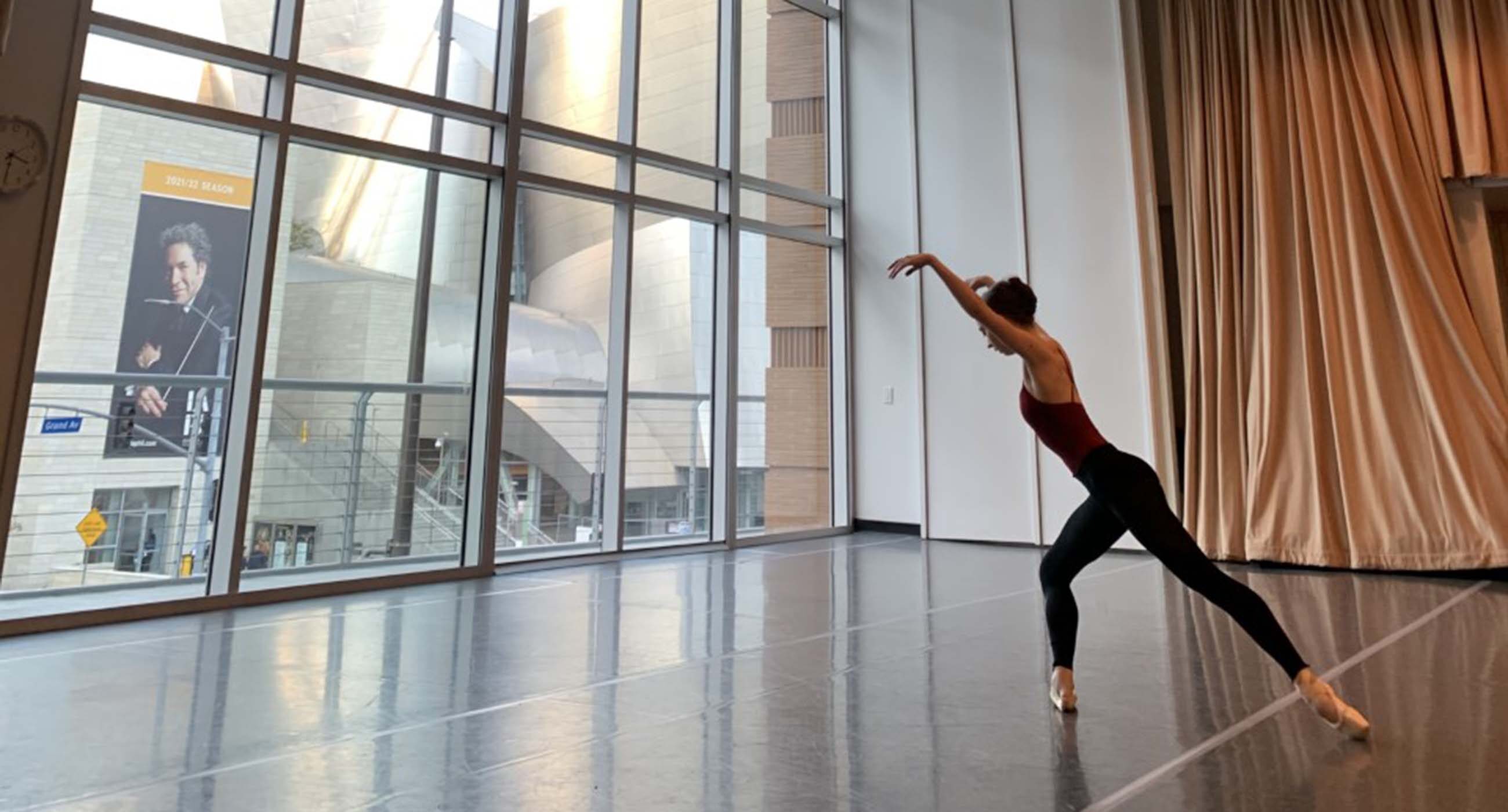 Ava Dhria Metzger captured in Grand Rehearsal Hall during her solo performance from the student choreography workshop at Colburn.

Ava Dhria Metzger grew up in a household that embraced and celebrated dance and music. It wasn’t until she was nearly a teenager that she discovered her own passion for the performing arts. Despite her father being a professional ballet dancer and instructor, Metzger didn’t start taking ballet classes until age 12 at a small studio in Pasadena, California.

As she mastered the basic positions and graduated onto more complex techniques, Metzger sought a more challenging learning environment. That decision led her to the Colburn Community School of Performing Arts, as well as the Trudl Zipper Dance Institute Summer Intensive program. With the encouragement of instructors, including Visiting Artist Jenifer Ringer, Metzger auditioned for and was accepted into the Dance Academy.

“After doing some reflection, I decided this is something I want to learn more about,” she says.

Metzger, who is now 16, continues to explore her artistic capabilities. On top of Dance Academy classes, she enrolled in the Student Choreography Workshop taught by Cara Scrementi, Colburn’s stage manager. The workshop examined the many elements that come together for a live stage performance. For a capstone project, each student choreographed their own 2.5-minute solo.

“It’s a daunting thing to tell a bunch of teenagers that you have to choreograph yourselves in a relatively long piece all by yourself,” Metzger says. “When learning a well-known piece, you are told what the vision is and how to communicate it. So it is different when you are in the driver seat and have to make all the decisions. This was the first time where I had a full concert piece on my own. I picked the music, the costumes, and did the choreography myself.”

Of course, the students were guided through the creative process. Scrementi kicked it off by introducing various short-form pieces.

“We were creating smaller phrases of dance and learning about creative methods to use later when we started creating our choreography. We also examined the relationship with music, or whether there should be no relationship with the music. We learned about the different tools to expand a phrase and creating longer passages of movements,” Metzger explains.

“Cara shared notes during rehearsals and would tell us to show the progression of our steps more. But she also would stress that ‘it is your prerogative,’” Metzger continues. “I always felt we had autonomy. Cara respected our creative vision. We were in control of our vision.”

“It is interesting because Silas has so much genuine passion for ballet techniques, and passing those on. That is always so cool and inspiring. He has great energy to be around,” says Metzger. “He and Darleen emphasized the idea of dancing in class. They also stressed to us to present what we created in a clear way.”

Constructing a well-choreographed performance isn’t just about assembling movements or putting together a series of steps, turns, and leaps. The class challenged Metzger to convey a narrative not only through her dance, but with the music, too. At first, she thought a traditional classical piece would fit her best. But as she worked on the choreography, Metzger realized the music simply wasn’t speaking to her. It wasn’t motivating her dance decisions.

“I did some reflecting and realized I wanted to try playing around with it. I started looking at music that was less structured, like sound scapes,” she remembers. ”I wanted to try some movements that were more contemporary, but still ballet based, but a lot that wasn’t purely classical.”

Experimenting with different musical pieces, Metzger finally found a connection with the song “O Superman” by Laurie Anderson. Nearly instantly, she recognized it was the music that supported the expression she sought for her solo.

“The idea popped into my head that this would really work. I was so inspired and connected to it,” she says. “Once I found the music that resonated with me, I was able to choreograph my solo over the span of three days. It happened so quickly. It’s like I knew it was supposed to happen. It was like these moves were always the steps and I just had to find them.

“My favorite part of that solo was how it made me feel so centered. Every time I performed it, I was in an intense space that felt so calm and within myself,” she adds. “I did the solo on pointe and the steps I had taken were from ballet, but the way I moved between them, the transitions, I feel were really inspired by modern techniques. To me, ballet feels so ethereal, and this solo felt more grounded, calm, and rooted.”

As a performer, designing an original solo definitely delivered a sense of accomplishment. However, throughout the process, Metzger felt like she was part of a collaborative ensemble. She leaned on the creative energy and moral support her fellow Dance Academy classmates offered each other. She says every rehearsal eventually ended with impromptu brainstorming sessions during which dancers shared ideas, suggestions, and critiques.

“In a way, it was very independent, but it was a big sense of community, too. It was encouraging. That was my favorite part. We even learned different parts of everyone else’s pieces,” she says.

Now that she’s gone through the creative process, Metzger is keen for an encore.

“I think this class and performance were so enlightening. I learned so much about myself as an artist and my style of movement, my artistic fingerprint,” she explains. “I learned what I enjoy creating and performing. I like developing the technicalities of how to explain your vision. It made me think differently about myself. I’m the most authentic version of myself this year, and I want to take that into future performances.”

The Trudl Zipper Dance Institute takes pride in moving the art of dance forward by teaching and extending the great traditions of ballet, modern, and tap to all students who desire to learn, regardless of age or ability to pay. Special appreciation goes to Colburn Society members Ann Mulally, David Kobrin, Aliza and Michael Lesser, Lucy Farber and Jim Bright, Mazie and Gabriel Hoffman, Anne and Jeffrey Grausam, Meltem and Mehmet Ozpay, George and Linda Cassady, Susan Friedman, and Layla and Gac Kim, whose annual support makes dance scholarships at the Colburn School possible.

If you would like to learn more about giving to the Trudl Zipper Dance Institute, contact advancement@colburnschool.edu.