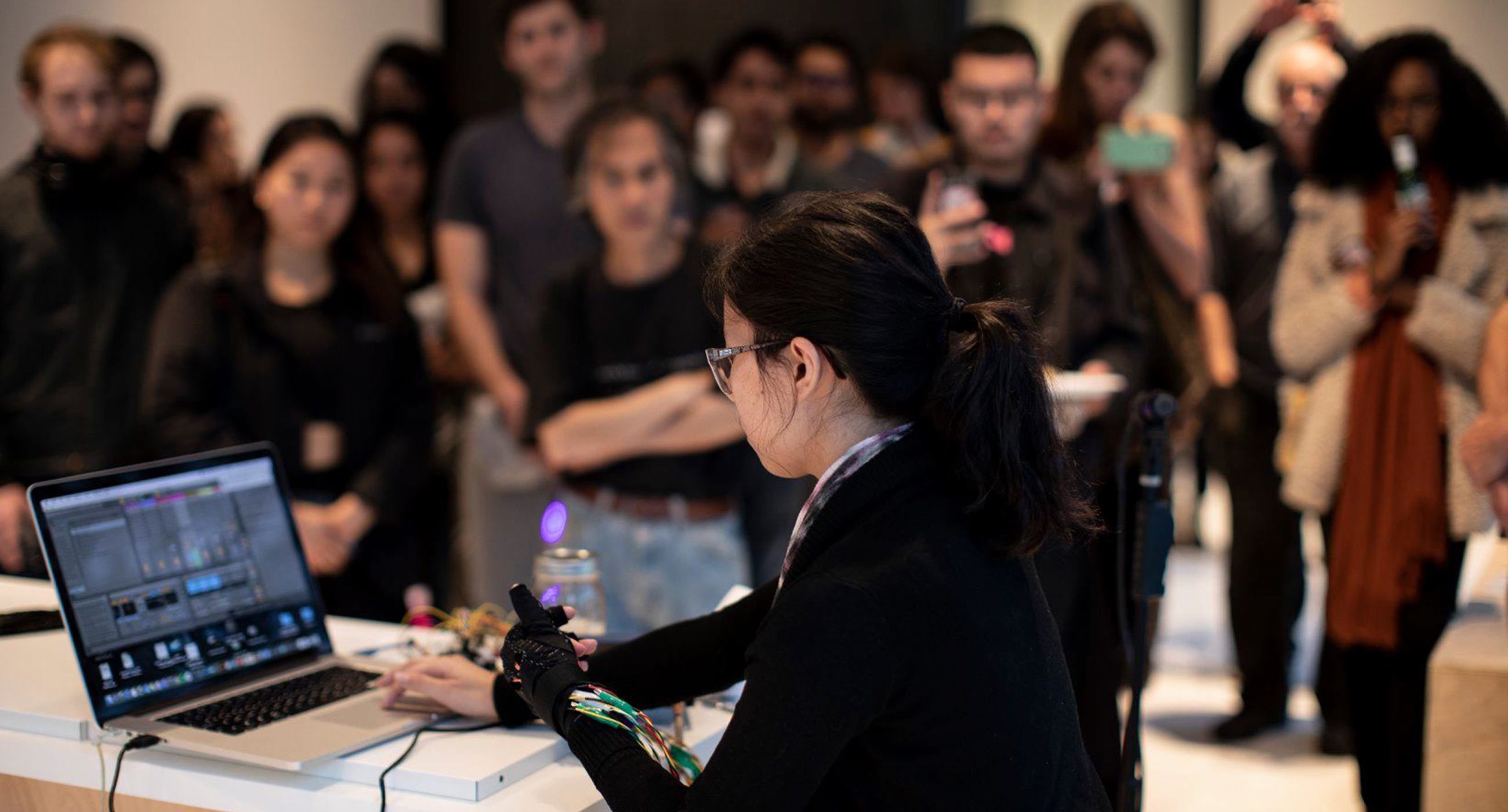 Jazz alumnus Sara Sithi-Amnuai draws on all the skills she first polished at Colburn for her innovative work in music technology and composition.

When asked what she’s been up to lately, Sara Sithi-Amnuai (Community School of Performing Arts ’13) responded, “I’m doing a lot of writing,” referring to both her work as an academic and as a composer. Now less than a year out of grad school, she continues to perform on and document her work with Nami, a custom built glove interface specifically for trumpet that she invented as a grad student. The glove itself is a 15-inch medium sized satin glove equipped with censors to capture gestural data as she moves her hand. She can then use that data to process the sound of the trumpet in Ableton Live, a digital audio workstation that can be used as an instrument for live performances. Visually, it is small and unassuming aside from the protruding wires. Sara wears it on her left hand when she plays, which leaves the right hand unobstructed and the trumpet physically unaltered.

Nami is the product of so many threads of her experience as a female musician. Sara is petite, composed, cultivated, and has a clarity of intent when she speaks that belies a deep curiosity for the musical humanities. Initially a piano student before picking up the trumpet and diving into theory and jazz, Sara had been drawn to music from a young age because of its ability to speak to deeper matters. “It comes from people. I always related to people or myself better with music.”

She traces the early inspiration for Nami back to her first experience working through material that required a Harmon mute, which is inserted into the bell of the trumpet and features a stem that can be manipulated to affect the timbre of the instrument. “The mute requires the hand to make contact with the stem of the mute [while playing],” she explained, “and I literally couldn’t reach the bell.” It seemed as if an entire body of repertoire was off limits due to her physicality. “I flipped it to focus on that…and make it a focal point,” she explained. She would figure out a way to open up the sonic terrain of her instrument without it being as strenuous on her body.

The name Nami—the Japanese word for “wave”—speaks conceptually to the way she experiences music and draws a clear line to her cultural heritage, which she began exploring when she participated in the Nikkei Music Reclamation event in 2018. At that point, the glove was still in a nascent stage conceptually and materially. She recalls, “The glove had some sensors and early sketches…but no vocabulary or language.” In a panel with some of the other musicians, a Japanese vocalist who had been trained mainly as a Japanese folk singer discussed the feeling of adopting the jazz idiom as “nami.” It’s the sensation Sara realized she associated with the blues, where there is clear structure but the importance is in the feeling. It is a reference to connection and motion. Sara conceptualizes it as the magic that happens between parts, between the bar lines, between the piece of music and the audience. “It’s scary to rely on listening,” she reflected, “But I have to be very focused…It’s already there, I just have to listen.”

She now composes and performs primarily using Nami. Beginning with a set of ideas, she practices different movements with the glove, but during a performance, it’s determined by the space and the audience. She had spent plenty of time training on her instrument with a focus on consistency. By the nature of relying heavily on listening, each performance becomes its own unique iteration that relies on her practiced artistry to make choices in real time that make sense in the context of that specific performance. “It’s more of a conversation,” she points out, rather than just stream of consciousness or talking to herself. “This method is much riskier but more exciting.” It’s semi-structured improvisation with a clear similarity to jazz.

Sara began composing as a jazz student in the Community School’s Thursday Night Band. As part of the instructive process, Colburn Jazz Workshop director Lee Secard encourages students to bring original material to work through with the other students. It was the first time she seriously entertained the idea of composing, and she credits Colburn for taking her seriously enough to push her forward. “I needed the pressure of being treated like a professional,” she admits, “There’s not a baby level at Colburn.” So she composed “Cindy’s Song” in honor of her sister and brought it to the group to workshop and record. It won a DownBeat student award in 2013 for Original Composition in the Performing Arts High School category alongside fellow Colburn student, Jeremy Corren (Community School ’13).

Sara went on to study jazz performance at UCLA, earning a Bachelor of Arts in Ethnomusicology with a minor in Music Industry in 2017, and then to the California Institute of the Arts where she received a Master of Fine Arts in its innovative Performer-Composer program in 2019.

As far as she’s come as a risk-taking creative technologist, she has not strayed far from her jazz roots. Sara has become a regular addition to the roster of the community-driven Pan Afrikan Peoples Arkestra (colloquially referred to as The Ark or P.A.P.A.)—as have fellow Colburn Jazz alumni Zekkeraya El-Megharbel (Community School ’13) and Aaron Shaw (Community School ’13). Founded in 1961 by jazz artist Horace Tapscott, the Ark in the present day is a collaborative effort “dedicated to community, social consciousness, arts and Afrikan culture.” Legacy members play alongside younger musicians under the direction of CalArts jazz alumnus Mekala Session as part of a living tradition of cultural preservation through storytelling.

Sara’s recent work has been community-centric. In an effort to connect and reconnect with her Nikkei heritage, she has been focused on researching and utilizing cultural design methods as they pertain to gestural controller design, performance, and composition. She hopes this work will encourage others to consider technological design in new and inspiring ways that resonate with users and spark their curiosity to explore and extend their own individual and collective identities.