With its elongated body and labyrinthian system of pipes and joints, the bassoon is perhaps the most unusual looking of the winds and brass family. When choosing an instrument to study in Colburn’s Jumpstart program nearly four years ago, Jerver Hernandez said he “didn’t even know how someone would play it.” However, he was up for a challenge, and decided that day to be a bassoonist.

In the four years since, he’s excelled in Jumpstart and in the Community School of Performing Arts. This fall, he’s headed to Ohio for his first year at the Oberlin Conservatory of Music. He is the first Jumpstart alumni ever to enroll in a major music school, marking a milestone for the program.

Jerver first heard about Jumpstart during his freshman year at the Ramón C. Cortines School of Visual and Performing Arts where he met Huei Pan, former Director of the Jumpstart program, who encouraged him to join. The son of El Salvadorian immigrants, Jerver grew up in Los Angeles and had played trumpet and guitar in middle school. However, private lessons and ensemble classes for bassoon would have been out of reach for him without Jumpstart, which serves students that would most benefit from music education, but do not have access to immersive instruction.

The night he brought home his bassoon, Jerver spent hours poring over YouTube videos, studying how to hold and make a sound out of the large and complicated instrument. He wanted to get a “macro level understanding” of how it worked in anticipation of his first day of lessons and rehearsals.

Soon after, he started private lessons with Conservatory of Music bassoonists in the Teaching Fellows Program. After a few months of learning the basics, he joined his peers in the Jumpstart band, which further motivated him. “To get better, you have to be consistent, and Jumpstart kept me on the right path,” he explained. “I had a group where the curriculum was really immersive, and then I had my lessons, so every day I was being challenged.”

Jerver spent hours each day playing his bassoon, and continued to improve at a fast pace. His senior year, he was accepted into the Herbert Zipper Scholars program, which provides full-tuition scholarships for lessons, classes, and ensembles to students in the Community School who demonstrate high potential and financial need.

“That’s when things got really serious,” Jerver recalled. After just three years of playing, he was studying with esteemed professor Richard Beene, the same man who taught his first teachers from the Conservatory of Music. “He pushed me to my limit,” Jerver said of Mr. Beene. “He got me to think about the importance of discipline and delayed gratification, and how consistency is key even when there is a lot going on in your life.”

Jerver exceled under the guidance of Mr. Beene, who noted his dedication and potential. “He’s very committed and is always eager to take advantage of every opportunity to learn,” he said, adding that he attended all of his studio classes and recitals of fellow students. “It’s been a pleasure to teach him, and he’s made such remarkable progress.”

Soon, Jerver will head to the Oberlin Conservatory of Music, where he’s been granted a full-scholarship, including room and board. Though he knows it is bound to be a life-changing experience in a completely new setting, his motivation is the same.

“I find so much pleasure in learning new things. That’s what inspires me.”

One of the most rewarding things that I have ever done for myself has been to become acquainted with the Community School Iona Benson, Honorary Life Director, In Memoriam

When Iona Benson, a longtime friend, board member, and supporter of the Colburn School, passed away late last year, she ensured that her love for the Community School of Performing Arts lived on with a generous and unprecedented bequest of $1 million. The gift is the largest realized bequest in the school’s history, will go to support need-based scholarships in the Community School.

Friends and former colleagues described Iona as bright and passionate, with a dry wit and a deep love for music, children, poodles, archeology, and plants. She first became involved with the Colburn School in 1982 after viewing Child’s Play, a local PBS documentary featuring the Community School. Moved by the school’s mission and with no prior introduction, she sent a large, unsolicited check.

Then President and CEO, Toby Mayman, encouraged her to visit in person. “She did, and essentially never left, certainly in spirit,” said Toby. As a volunteer, she championed community engagement programs, and became particularly involved with growing the Musical Encounter program.

In 1987, after five years of deepening involvement with the school, she sent a letter reflecting on her love for the Colburn School. “Nothing can quite describe the delight of seeing these young people joyfully producing a joyful sound. But what moves me so profoundly are the steps along the way,” she said.

You can read her full letter below, and view a PDF of the original.

One of the most rewarding things that I have ever done for myself has been to become acquainted with the Community School. For many months now I have wanted to write to you to thank you for the joy and enrichment which you permit me to share. Many thank yous are in order, so somewhat belatedly, let me try to articulate a few.

First and foremost is the quality and the spirit of the school. The excellence. The care and dedication to the elementary student playing before his or her peers, right on through to the astonishingly gifted; to those who may go on to renown and to those whose lives will forever be enriched regardless of the path they may choose.

Thank you for letting me witness the depth and breadth that make possible the Honors Recitals and the Joyeux. They are in themselves pure elation! Nothing can quite describe the delight of seeing these young people joyfully producing a joyful sound. But what moves me so profoundly are the steps along the way. To watch the open classes, the Friday Night Recitals, the master classes, the School Recitals, and now the Chamber Music Recitals, is to see those steps: the interplay between students and teachers and families so vital to their development as musicians and whole beings; the coming together of striving young individuals in that special world of ‘making music’; the sense of something beautiful and worthwhile shared.

It is a rare and lovely privilege to be transported to that purely emotional, inspirational realm which is essential to our lives, but which, lacking nurture, can be so easily lost.

I thank you most profoundly for permitting me to share in this extra dimension.

Join Iona in supporting need-based scholarships in the Community School of Performing Arts with your gift to the Access Fund.

Zach and Langka Treadwell have made a home for eight kids, seven of whom they adopted from around the world, and there’s another on the way. For this diverse family, music has become an essential part of their lives, and they’ve found a community at the Colburn School.

After a few years of marriage, Zach and Langka started to look into adoption, and came across a website of an agency in Kazakhstan. Three months later they were flying out to the Central Asian country to meet their baby girl. Within a couple of years, they had adopted another daughter and a son, and that’s when, as Zach says, “the floodgates opened.” Over the next four years they added four girls to their family from Ethiopia, Korea, and Vietnam. Since then, they’ve had an 18-month-old, and Langka is expecting their ninth child this summer.

When the Treadwells relocated back to Southern California from New York in 2005, at that time with just three kids, Langka knew she wanted them to study Suzuki strings at the Colburn School. Zach, however, was skeptical of a plan that required commuting from the Westside twice a week. Slowly, though, he came around. “They were getting something that they couldn’t get on the Westside; they had a whole community at Colburn. We were doing something that was good for them, and ultimately good for the rest of our family.” 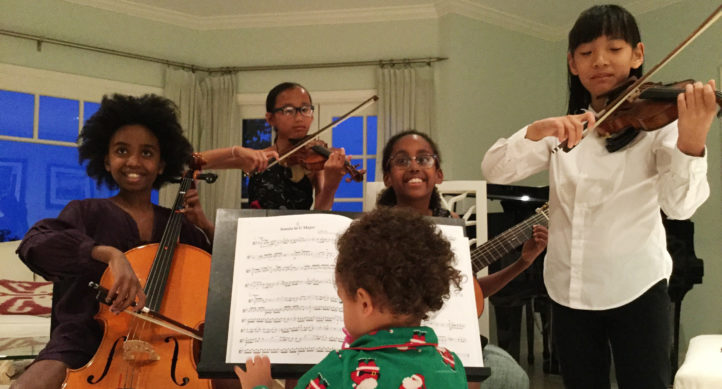 The Suzuki method includes parent involvement—participation in lessons, coaching through practice time—so, with two cellos, two violins, a guitar, and a viola in the house, Langka and Zach dedicate hours each day to working on music. Zach says it’s become an enduring part of their family culture. “Everyone is already asking what instrument our 18-month-old is going to play.”

Last spring, the Treadwells attended their first fundraising event at the school, the family-friendly Taste of Colburn, where their violinists Gigi and Valentine were performing. It was there that they recognized the need to support Colburn’s scholarship programs, and they soon after attended the annual gala, Celebrate Colburn.

When asked why they decided to start giving in addition to the hours of time and money already invested, Zach had a simple answer. “If I didn’t acknowledge [Colburn] as a huge part of what we do as a family and part of my own personal identity, I would just be fooling myself. I think that supporting it, whether with time or with money, comes naturally from the identity that you draw from it and taking pride in that.”

Zach says Colburn has become a way of life for him, Langka, and their six kids currently taking lessons downtown. “It’s become our family. It’s just what we do on Wednesdays.”

Join the Treadwells in giving back to the Colburn School with your gift today. Visit this link to learn more about ways to give, or donate now.