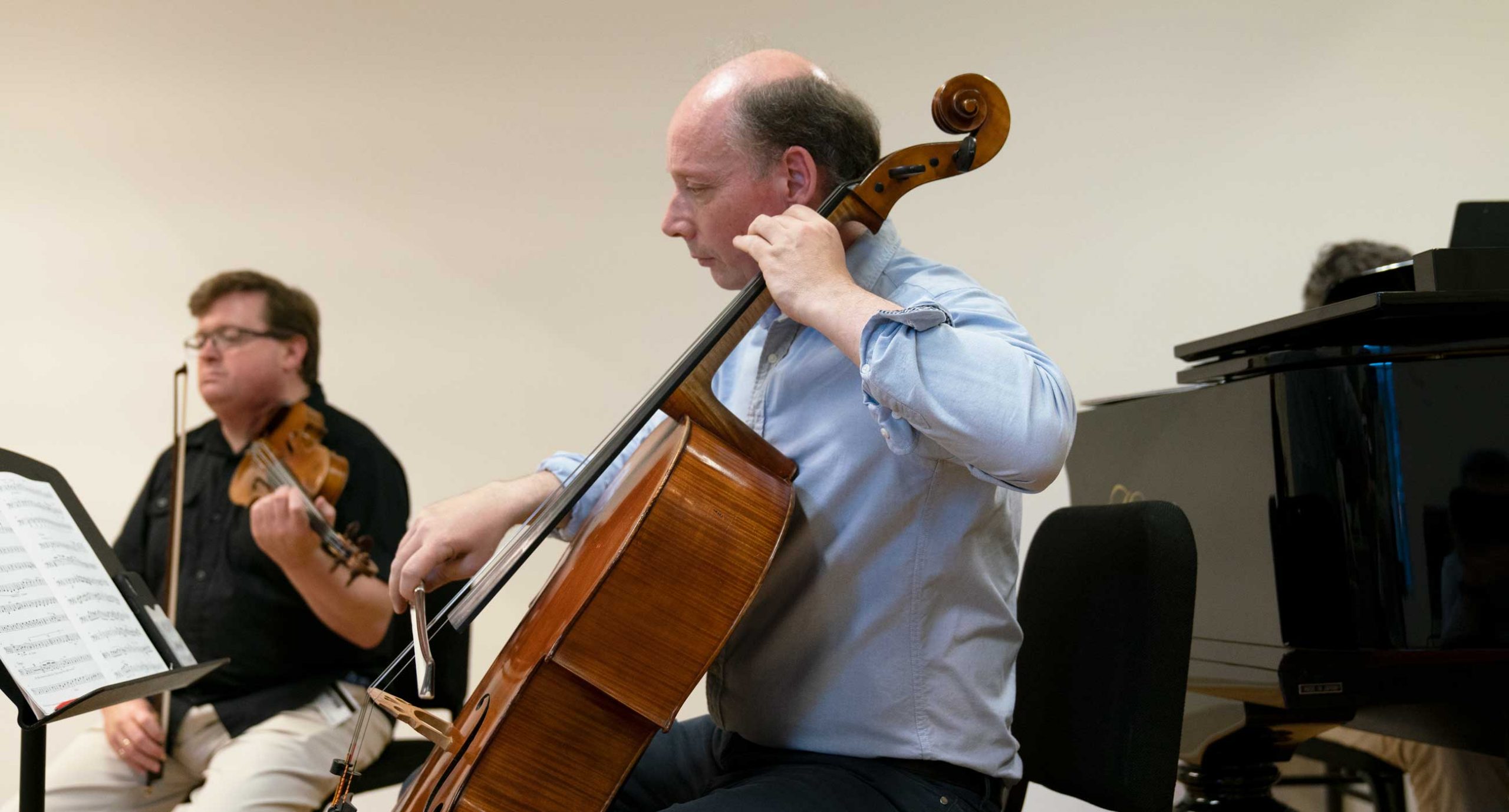 This April, Toccata Classics released a new album of works by composer Pál Hermann, featuring performances by Colburn cello faculty member Clive Greensmith. Hermann, a cellist born in Budapest in 1902, was a major figure in Hungarian music and an important composer. Although many of his works were lost after his early death in 1944 at the hands of the Nazis, the Ziering-Conlon Initiative for Recovered Voices at Colburn has played an important role in giving him the recognition he deserves.

In 2016, Dr. Murray and Mrs. Susan Brown, members of Hermann’s Hungarian-Jewish family who have a scholarship fund at Colburn Community School in memory of Hermann, discovered the Hermann score and reached out to Robert Elias, Director of the Ziering-Conlon Initiative, to explore possibilities for this wonderful discovery.

“While the Ziering-Conlon Initiative for Recovered Voices draws the attention of Colburn students to works of a certain number of suppressed composers, every so often we encounter the work of a composer who had been completely unknown to us,” wrote Robert, who played a key role in establishing the Ziering-Conlon Initiative for Recovered Voices with Maestro James Conlon’s vision. “In the case of Pál Hermann, we were particularly pleased to discover a composer whose music resonated immediately with Clive Greensmith and, thanks to his efforts, with Colburn musicians as well. That the composer’s family has a direct connection to the Colburn School makes this discovery even more meaningful.”

Robert approached Clive with the scores, who was immediately intrigued because they were written by a cellist composer. “I couldn’t wait to find out as much as I could about Hermann,” Clive shared in an interview. “I think the connection for me was as a fellow cellist first, but it was also with this time in history, which was such a defining moment for musicians. We’ve been through this pandemic for the last year, but imagine a conflict of this scale…the lives that were lost, the human suffering, yet the power of the music and the memory of someone that comes to us so forcefully, who speaks to us through his music. To be involved with such an endeavor really gripped me.”

Two-thousand sixteen marked the start of Clive’s multi-year journey bringing Hermann’s music to light. He premiered Hermann’s music for the spring 2016 Recovered Voices class members in Colburn’s Thayer Hall, then later that year performed it for scholars and guests from throughout the US and Europe at the Recovered Voices International Symposium. That is where Clive met Hermann’s grandson Paul van Gastel, a trained singer and physicist who lives in Italy. He was able to introduce more of Hermann’s works to Clive, which then led to a reconstruction of Hermann’s Cello Concerto by Italian composer Fabio Conti.

“We recorded the concerto the morning after the premiere and Pal Hermann’s only surviving child, Corrie Hermann, had made the trip from Holland to be with us. She sat listening alone in the auditorium in what felt like one of the most intimate performances I have ever experienced,” Clive reminisced.

Throughout his journey with Hermann’s works, Clive was able to connect with the composer’s family and end up with “a whole new family of friends.” That kind of relationship building is a significant part of music, and is important not to lose sight of even though more emphasis is placed on technical skill and how to be a good musician in school. “The ‘why we play’ is much more important—the message of the music, the way that music connects us with people that came before us, what music can do in a community.”

Connecting with the composer and the community is also key to Clive’s artistic process. “The fascinating part is to try to get inside the head and the creative mind of the composer to find that composer’s true voice,” he explained. To inform his interpretation, Clive learned about Pál Hermann by listening to recordings and having lengthy conversations. He spoke with several close friends, and Jewish-Hungarian émigrés who came from the same milieu and who shared the same musical influences like Bartók and Kódaly. “I was trying to figure out as much as I could about him and about his life story,” he described. “I was imagining how he would have drawn the sound from the cello to immerse myself, a little bit like method acting.”

Clive compares the interpretation of a composer’s work to winemakers: “the great winemakers just let mother nature take its course. Let the terroir speak for itself, don’t be overly manipulative.” To make a wine that is true to its terroir, you need to understand and respect nature. It takes a similar approach with the music. “Regarding the composer, you have to understand his or her musical language, often reading between the lines and moving beyond the notes you see on the page. One must add one’s own personality in perfect balance with the voice of the composer. This is my philosophy as an interpreter.”

Although Hermann’s life was tragically cut short, performing and recording his music through the Recovered Voices programming has been a way to know him and respect his memory. “He is with us through his compositions, and this represents the communicative power of music. It has a way of connecting us with a different time and space. Above all, it’s a celebration and a way of honoring somebody that should have lived a much longer richer life,” said Clive.

The Ziering-Conlon Initiative for Recovered Voices, established with a generous gift by Marilyn Ziering at Colburn by Maestro James Conlon and Robert Elias, is a unique Colburn resource that encourages greater awareness and more frequent performances of music by composers whose careers and lives were disrupted—or worse—during the years of the Nazi regime in Europe. Learn more at www.colburnschool.edu/recoveredvoices.