Colburn School and Sphinx Organization Form Partnership to Engage, Develop, and Empower Young Artists of Color on the West Coast 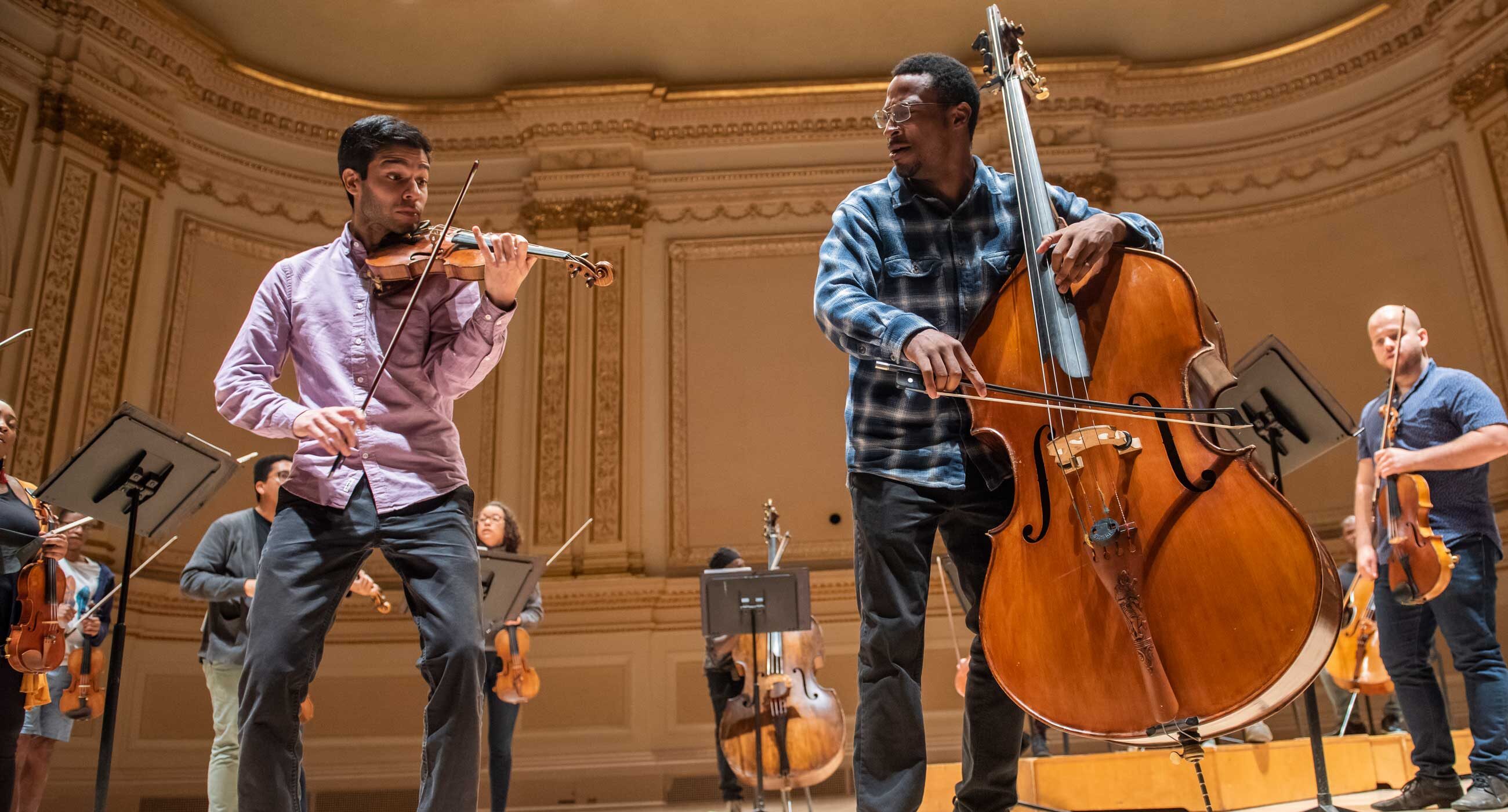 The partnership includes scholarship support for Sphinx alumni, a residency by the Sphinx Virtuosi (pictured above), and the first-ever West Coast retreat for the Sphinx LEAD cohort.

Colburn announced recently that it has partnered with the Sphinx Organization, a non-profit organization based in Detroit dedicated to transforming lives through the power of diversity in the arts, with the aim of creating new opportunities on the West Coast for emerging young Black and Latinx musicians and arts professionals.

Beginning in 2021, Colburn will provide full scholarships in its Music Academy program to pre-collegiate musicians who are winners and semi-finalists in the Junior Division of the Sphinx Competition; present the Sphinx Virtuosi in a residency that encompasses performance, education, and community engagement; and host the first West Coast retreat for the Sphinx LEAD cohort. Designed as a long-term collaborative partnership, the two organizations will explore additional opportunities to engage, develop, and empower young artists of color.

“The Colburn School is excited to engage deeply with the Sphinx Organization, longtime international thought leaders in building opportunity and access for artists of color in classical music,” said Colburn President and CEO Sel Kardan. “The partnership with Sphinx will enrich all aspects of our institution, as well as our greater community. We look forward to forging a lasting relationship and dialogue that creates additional pathways for aspiring musicians and arts leaders from Los Angeles and across the country.”

“We are excited to work with Colburn to further the work of excellence and diversity in the arts,” said Afa S. Dworkin, Sphinx President and Artistic Director. “At Sphinx, we believe in the power of partnerships and striving for an impact that is greater than the sum of its parts. The time for transformative work is now and we are thrilled to do it together!”

With the goal of creating greater access to pre-conservatory training, the School will provide significant scholarship support for alumni of the junior division of the Sphinx Competition. The Sphinx Competition is an annual national competition offering young Black and Latinx classical string players a chance to compete under the guidance of an internationally renowned panel of judges, and to perform with and receive mentorship from established professional musicians.

As part of the newly formed partnership, Sphinx alumni will be eligible for full scholarships to the Colburn Music Academy, a residential pre-college program that prepares gifted young musicians ages 14–18 for conservatory study and future careers as professional musicians. Upon a successful audition for the Music Academy, Sphinx alumni will receive full scholarships that also include room and board. Any past or present winner or semi-finalist from the junior division of the Sphinx Competition is eligible.

The Sphinx Virtuosi are the nation’s most dynamic professional chamber orchestra, dedicated to increasing racial and ethnic diversity in classical music. Composed of eighteen of the nation’s top Black and Latinx classical soloists, the Virtuosi are alumni of the internationally renowned Sphinx Competition, and its members work together as cultural ambassadors reaching new audiences. In October 2021, the Colburn School will host a three-day Sphinx Virtuosi residency, to include public performances and educational and community engagement activities. Sphinx Virtuosi musicians will lead programs and perform alongside students in the Colburn Community School, Music Academy, and Conservatory of Music.

Sphinx LEAD (Leaders in Excellence, Arts & Diversity) is a 2-year professional empowerment program designed to evolve the landscape of arts leadership. Ten arts leaders of color are selected annually to participate in a curriculum including mentorship, networking, and leadership retreats at top institutions nationwide. In July 2021, the Colburn School will host the first West Coast retreat for the Sphinx LEAD cohort, providing access to local arts leaders and opportunities for participants to engage with Colburn faculty and students. The Colburn School’s Jazmín Morales, Assistant Director, Center for Innovation and Community, was selected as a Sphinx LEAD participant in 2019.

The Colburn School is grateful to receive support for these initiatives from the Sidney E. Frank Foundation. “We’re moved and encouraged by everything you’re doing as you deepen your long term connection with the community, and expand your efforts to bring more young people of color into the world of classical music and the classical arts,” said Cathy Halstead on behalf of the Sidney E. Frank Foundation. “We look forward to being a small part of the important work you’re doing. Your way forward provides a path that is essential to all of us.”

The Sphinx Organization is the social justice organization dedicated to transforming lives through the power of diversity in the arts. Sphinx’s four program areas—Education & Access, Artist Development, Performing Artists, and Arts Leadership—form a pipeline that develops and supports diversity and inclusion in classical music at every level: music education, artists performing on stage, the repertoire and programing being performed, the communities represented in audiences, and the artistic and administrative leadership within the field.

Sphinx was founded in 1997 by Aaron P. Dworkin with the goal of addressing the underrepresentation of people of color in classical music. The name Sphinx, inspired by the mythical creature and legendary statue, reflects the power, wisdom and persistence that characterize Sphinx’s participants, as well as the enigmatic and interpretive nature of music and art.