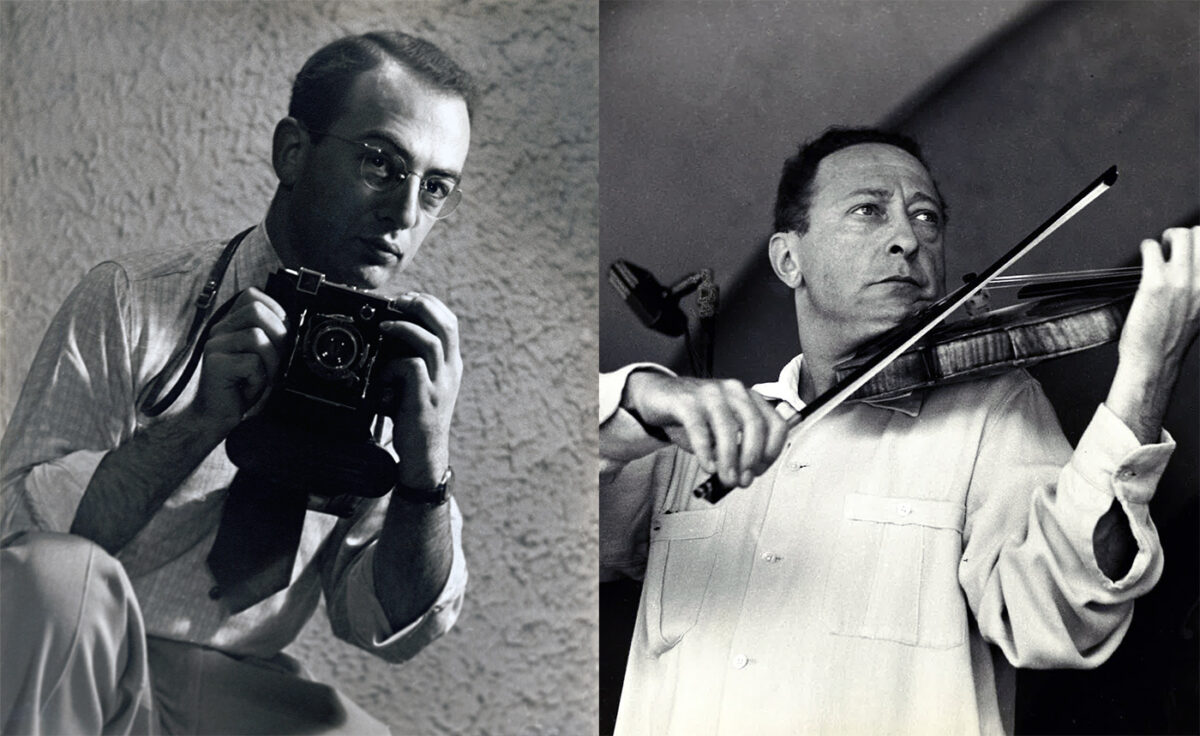 When the Colburn School’s Grand Avenue building was designed more than 25 years ago, deliberate thought went into how the architecture could enhance the performing arts education for students and their families as well as create a welcoming environment for audiences and visitors. When Toby Mayman, former executive director (1980–1999) and lifetime honorary board member, walked through the freshly painted halls, she recognized yet another opportunity. The bare walls were blank canvases waiting to be adorned.

“I was highly motivated to blur the space between the performing arts and visual arts. I feel they are part of the same creative effort, creative inspirations for students,” she recalls.

Mayman and then-Dean Joseph Thayer visited several Los Angeles galleries to pitch the idea of local artists volunteering their works to be displayed on Colburn’s walls for an entire school year. Peter Shire, who had been commissioned to create the chandelier hanging above the main staircase, was the inaugural featured artist. Year after year, the School connected with various galleries to showcase multiple mediums and stylings.

“It grew organically into the annual art installation. The faculty, staff, as well as students and parents looked forward to new installations. We usually scheduled a new art opening with a performance, too,” says Mayman.

Former board chairperson Wendy Kelman took up the mission of fostering relationships with LA painters, photographers, and artists, too. She introduced StudioEleven, an artist cooperative established in the StudioEleven Art Gallery that supports members through multiple efforts, including educational experiences and exhibitions. Almost immediately, members were keen on building a collaboration. Their first installation, titled Coda at Colburn, was on display for the 2015–16 academic year.

“The first year with StudioEleven was such a success that it led to another year and another year—their output is prodigious. That morphed naturally into the current relationship that seems to make everyone happy,” says Mayman.

Indeed, after a few years of submitting rotating collections, Colburn and StudioEleven agreed to an exclusive arrangement that the group would supply each year’s art installation on display from fall through summer. And now as a tradition, Colburn students typically perform in conjunction with each collection’s debut.

“Prior to that, we would seek out individuals, but now they are basically the resident rotating studio. The artists of StudioEleven are very passionate and they like the idea of integrating their art with the performing arts, students, families, and faculty,” says Randy Osherow, special assistant to Colburn School President and CEO Sel Kardan. As a trained visual artist, she also oversees the art installations on campus.

Each year’s collection illustrates a theme, oftentimes reflecting events impacting the city. So naturally when COVID-19 shut down classrooms and people were asked to work and learn from home, the artists expressed their reactions through their unique perspectives. The 2021 installation was called Lockdown Art: Reflection of StudioEleven Practices. Although the pieces found their home on the Colburn campus as planned, the pandemic forced the debut celebration to be postponed until January 2022.

“The artists were ecstatic when we finally held the event. They were able to revisit the work as if it was the first time, and it was wonderful,” says Osherow. “Also, I was surprised by how optimistic the work was. I think they came up with an amazing connection to the resurgence from COVID.

“The show that just opened this fall, called Cultivation, contains pieces by 25 artists and is an explosion of optimism, with every medium represented,” she adds. “From a visual point of view, the halls are alive with art designs in various colors, textures, and content. It is wonderful to share that forum with students, faculty, and families.”

“We are so grateful for the beautiful art displays around our campus. We encourage our dance students to take time to pause, reflect on the artwork, read who the work was created by, and allow it to inspire their own creative process as they develop themselves as young artists,” says Darleen Callaghan, associate dean for the Trudl Zipper Dance Institute.

Also gracing the campus halls, offices, and walls are black-and-white photographs courtesy of James Arkatov and the Arkatov family.

“The Arkatov collection harkens back to the friendship of Richard D. Colburn and James Arkatov. They were both lovers of classical music and they were both integral in founding the Los Angeles Chamber Orchestra,” notes Mayman.

Born in Russia, young James and his family immigrated to the United States in 1925, where he began playing the cello at age nine. By age 18, he was invited to join the Pittsburgh Symphony Orchestra. He also became principal cellist for the San Francisco and Indianapolis symphonies.

Upon moving to Southern California, Arkatov landed work as a studio musician for film and recording artists, including legends Ella Fitzgerald and Frank Sinatra. Still, he never lost a passion for classical music, and in 1968, Arkatov became the founder of the Los Angeles Chamber Orchestra.

Arkatov was also a talented photographer, first as a hobby inspired by his father and later as a secondary career. For decades, he captured the essence of musicians and artists in portraits, including Isaac Stern (a childhood friend), Igor Stravinsky, Sir Thomas Beecham, Gregor Piatigorsky, and Yo-Yo Ma, among hundreds more. He also memorialized rehearsals and performances with both still photos and video recordings and published two books: Masters of Music and Artists: The Creative Personality.

Arkatov’s photos have been exhibited in several museums and collections have been archived by renowned institutions, such as the Smithsonian National Museum of American History, USC Libraries, and UCLA’s Ethnomusicology department. However, he personally gifted the Colburn School two collections of photos in 2001 and 2008.

“Photos from the first gifts were installed in what I call the artery of the School, the floor where all the students walk through to and from classes, so it was a perfect place,” says Osherow.

After his death in 2019, Arkatov’s wife, Salome, a UCLA emerita piano faculty member and documentary filmmaker, and his children presented the School with another permanent gift of more than 300 photos.

“For the most recent exhibit, I looked for what Mr. Arkatov touched and selected. Both of the earlier gifts, he personally selected, and of the 300, approximately 100 were already matted, so that told me he held particular interest in them,” Osherow explains. “My job was to represent these arrangements on campus to inform students. The floor that is home to the conducting program, composing areas, the piano chair, and faculty members with studios has images everyone on that floor could relate to. On the floors with faculty in jazz, wind, and percussion, I curated images for those disciplines.”

The common theme throughout each collection is the hope that all who see them will find inspiration and feel a connection to the photographer and his subjects.

“We were united in that the goal was to have the art up on the walls. It was always the family’s wish that the photos be accessible and inform new generations of the performing arts. Students and families see the milestone musicians of previous generations,” says Osherow.

“We chose the Colburn School to have a permanent collection of my father’s photographs, because of the great admiration and affection my parents have always had for the Colburn family, and for the exceptional impact that the School has had on the gifted students and the communities it so proudly serves. We chose photographs that we thought would complement and amplify their unique location—on the walls directly outside of the Colburn faculty and practice studios on the fourth and fifth floors of the Olive Building—by providing an insider’s look at the behind-the-scenes preparation of the world’s great artists,” says Alan Arkatov. “The extraordinary collection of photographs that now lines the walls of the Colburn School are a testament to my father’s passions and interdisciplinary talents, and the importance of what the arts bring to individuals and society.”

“I find the Arkatov collection incredibly inspiring. The expressions of musical life of those fantastic musicians is making any artist richer and having a deeper contact with what real music making is. As music is a life-changing experience for everyone, so is the Arkatov collection, able to make music through his eyes and poetic portraits. Colburn is extremely lucky to have the chance to expose this profound way to ‘see’ music,” says Fabio Bidini, the Carol Grigor Colburn Piano Chair at the Colburn Conservatory.

“It is an invaluable resource and inspiration to the faculty and the students, especially those in the Conservatory. For me, it’s a reminder of the School’s growth and history,” says Mayman.