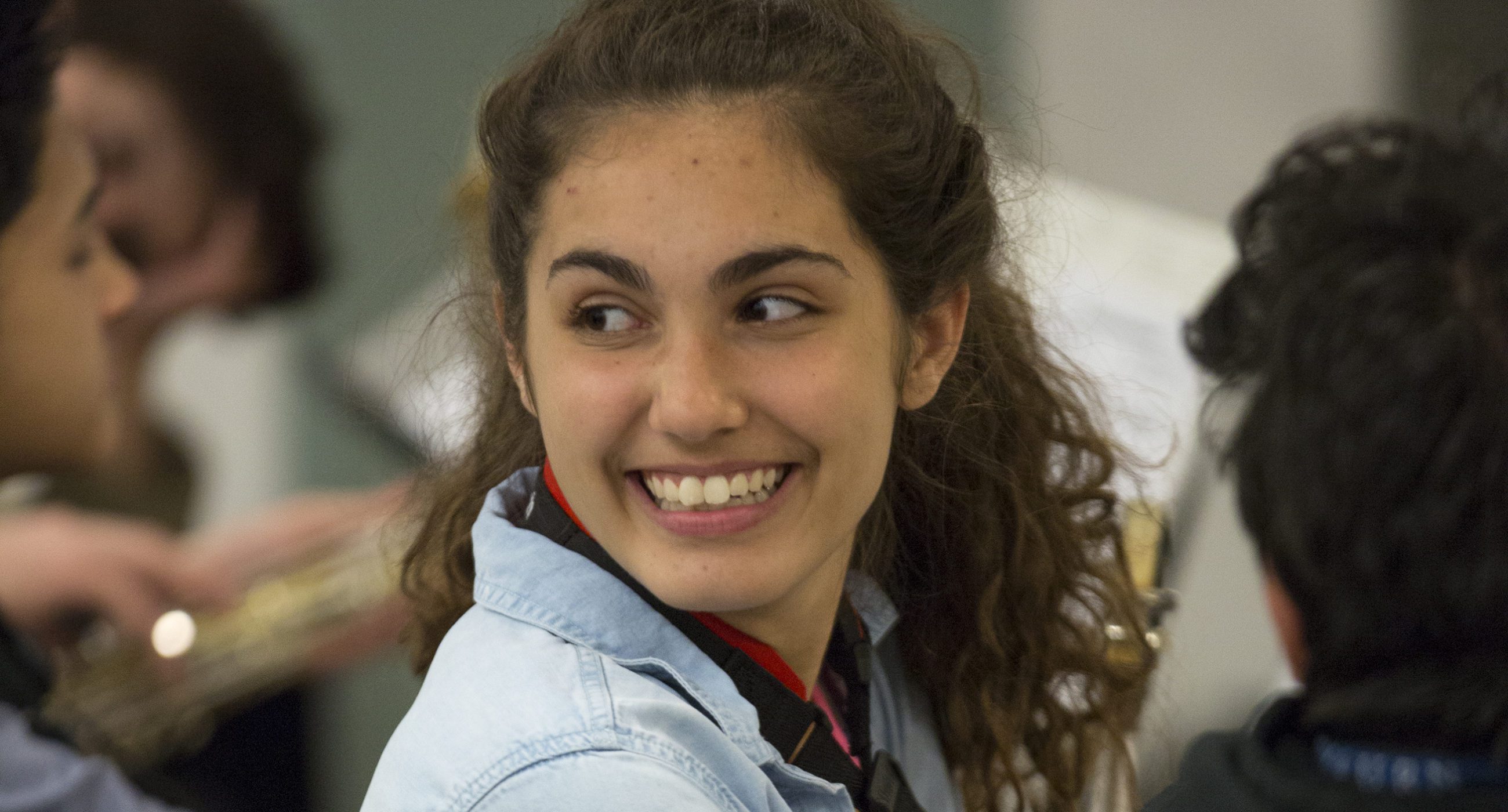 Carly Stock, 17, is a senior at Redondo Union High School. She has studied saxophone with Lee Secard for four years and has been playing the saxophone for eight. Besides private lessons with Mr. Secard, she plays in the Sunday One O’Clock Band and the Big Band in the Colburn Jazz Workshop. She is also the drum major of the marching band at Redondo Union.

How did you come to study at Colburn?
It’s actually a funny story. I used to dance as well and at the end of 5th grade, I had a few health issues with my Achilles tendon so when I was at my physical therapist, she recommended Colburn to me because she knew that I played saxophone. I asked, ‘Do they have a jazz program?’ And she was like, ‘Yeah, they do!’ So later, I got in touch with Lee [Secard] and that was that.

What’s your favorite thing that you’ve done here?
Definitely Big Band. It’s amazing to be around so many talented musicians that are my age. Last year, we won second in the Next Generation Monterey Jazz Festival and it was the highest we’ve ever placed in the four years I’ve been in the band. I actually had a solo in one of the pieces we played, “Solitude” by Duke Ellington. I’m hoping that this year we’ll do even better!

You also conduct your high school’s marching band as the drum major. How has that helped you as a musician?
That’s a good question. I was actually surprised that they chose me to be drum major because I have my lesson and Big Band here every week so I’d have to miss one day of marching band each week, but I was so happy that they chose me. I only started learning how to conduct this summer but in that time, it’s helped me understand the other side of the band. Before this, I didn’t understand why conductors would do some of the things they did but now I have a greater understanding of the ensemble as a whole.

What’s it like for you being a girl in jazz?
That’s also a good question. I know that discrimination can be a big problem in jazz but luckily, I haven’t faced any myself. I am the only girl in Big Band this year for the first time since I’ve been in it, so I’m sure that’s something people will notice when we’re on stage, but I think that I add a different perspective being the only female voice. I am also the only girl on my marching band’s leadership committee of six people at my high school, and that is a different experience too. I find myself speaking up more and leading more, but people tend to listen to me. I’ve only had one person come up to me and explicitly tell me that I’m a role model for girls in jazz. It was a trombone player in the marching band and she told me that she really looks up to me and that I’m an inspiration for her.

Why do you like playing jazz?
I like jazz because it allows for complete freedom while playing. Once you know the chords well enough, you are free to let your imagination take over the way you play; that is something other genres of music don’t allow for.

What’s one piece of advice you give to a young musician?
Don’t be discouraged. It’s so easy to look at other people and think, ‘Why can’t I do that?’—especially as a girl in a room full of guys. I’ve definitely cried in studio class before being frustrated at myself for not being able to play something, but you can’t let that stop you from keeping on going. Learning music is a very gradual thing. It doesn’t happen all at once.  Even my teacher, Lee, was telling me that five years ago he couldn’t play something on the saxophone that he can now, and he’s been playing for so many years. You’re never completely done learning your instrument so don’t give up.

What’s something you do outside music?
Besides music, I really like drawing and other visual arts, especially watercolor. I used to paint a lot and I loved it but once I discovered music, that was something new for me to be excited about. I haven’t had too much time to practice but whenever I get a free moment I like to draw, especially animals. When we get art projects or other creative projects in school, I definitely put a lot more effort into it than some of my classmates. I still have all my supplies.

You’re a senior in high school, so you must be thinking about what’s next. What are your plans for the future?
Right now my big plan is to do jazz studies in undergrad and then get a master’s in music education. My thought process is that I want to get as good as I can in performance first before I get into the teaching side. I really love teaching people and helping them learn. I’ve been mostly looking at university programs rather than conservatories because I like having more options and a more typical college experience. If I want to take a ceramics class, no big deal, I can just sign up for one as an elective class. Plus, universities have marching bands. My top choice is USC, but I’m also applying to a few other schools in Southern California and a couple further away, like the Frost School of Music at the University of Miami or University of North Texas. They all have great jazz programs. My mom really wants me to stay close to home, but it all depends on how my applications go.