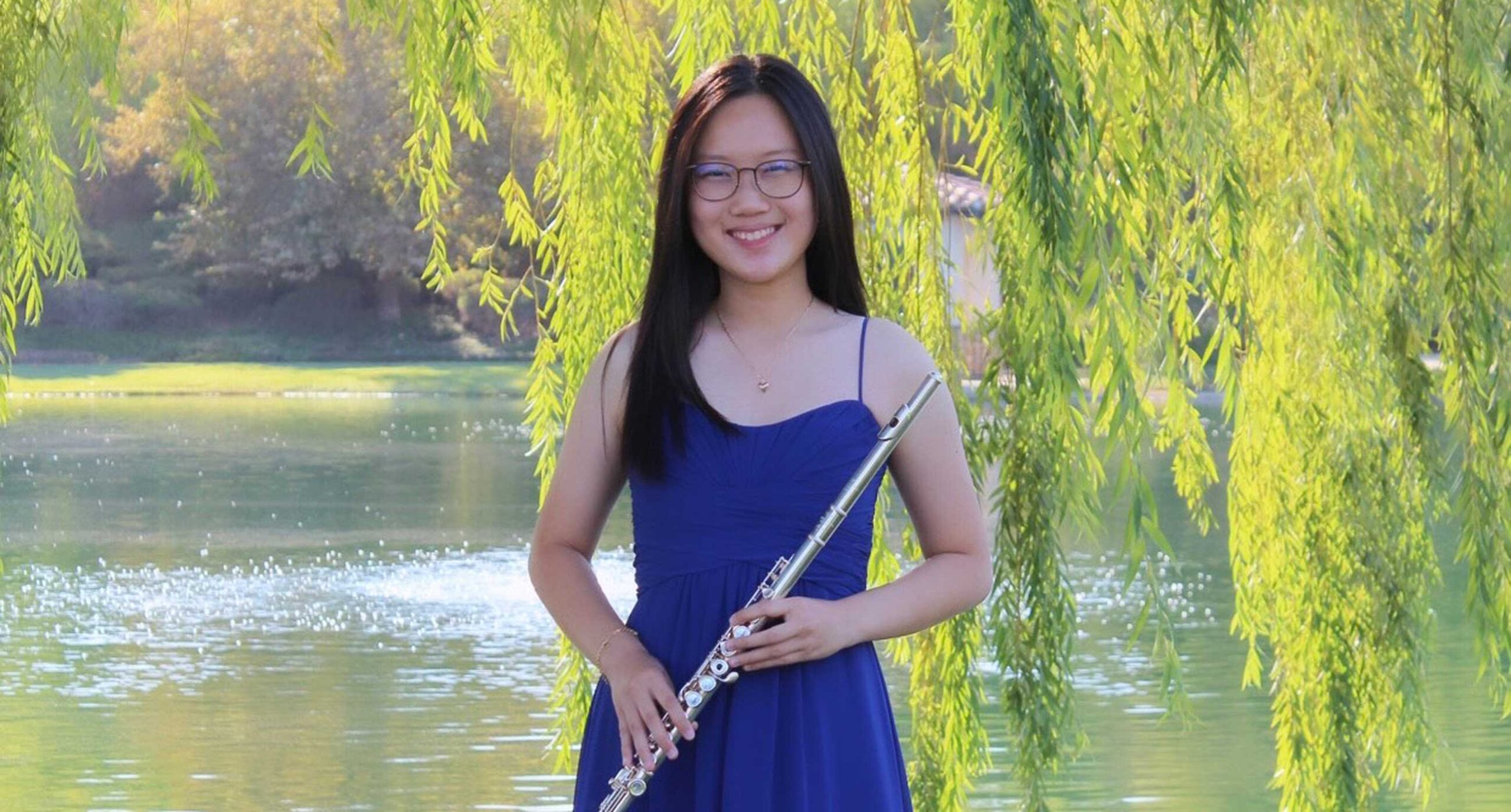 Celine Chen, 17, studies flute with Karen Lundgren, music theory with Kathy Sawada, and is an Honors Chamber and Colburn Youth Orchestra member. She is a Community School student of three years.

How long have you been playing the flute and how did you get started?
I started when I was nine, so, that’s eight years. I wanted to play violin at first, but the junior high I was going into didn’t have an orchestra, and I wanted to be part of the music program. It only offered band, so that’s why I chose flute instead of violin.

How did that decision turn out for you? What did you learn about the flute?
I have actually played the piano since I was four, and I think picking up a woodwind instrument was first of all, very different, because I had never really had to think about breathing before. Now that I play a woodwind instrument, I have to think about where exactly I should take a breath. I thought a lot more about the phrasing, because it would matter where I took the breath since it would chop off the music if I took it in the wrong spot. Because of this, I transferred my “music-phrasing analyzing” skills to the piano, and in this way, I was able to grow a lot as a musician.

I also learned a lot about tone because with the piano, if you put your finger on it, it already makes a beautiful sound. But then the flute, the first time I tried playing it, I couldn’t even make a sound. So for the first couple months, all I worked on was my tone; while in my piano lesson, I would already be playing short pieces. Thus, because of the flute, I focused a lot more on my sound and that helped me become more sensitive overall, whether that be playing the flute or the piano.

Do you still play the piano?
Yes.

What’s it like balancing the two?
It’s really hard. It used to be a lot easier before high school, but now that I’m in high school and I’m a senior, I’m taking a lot of hard classes. So it’s hard to balance the time, but I do try to balance it out as best as I can.

What are some of the differences you’ve noticed?
I’m not able to practice the flute as much as the piano because I physically get tired. After a couple of hours, for example, my embouchure starts getting worse because of fatigue. So compared to piano, the amount of time I practice has changed.

Also, the types of exercises I do to warm up have been very different. They’ve been more focused on tone and vibrato, as I’ve hinted at before.

How are you feeling about being back on campus at Colburn?
I’m excited to come back. I haven’t been able to do chamber and orchestra this past year, so I’m really excited to be back in person.

How were the virtual classes you took last year?
I took private lessons last year, and it was really hard, honestly. I think it’s a lot easier with piano. I also have to take virtual lessons for piano, and with woodwind the sound is a lot different. For example, the vibrato sometimes makes the sound cut out completely or the high notes aren’t even picked up. So, that makes it really hard. But I think my teacher made the best out of the situation, and I was still able to learn a lot and grow a lot.

What kinds of things did you learn during that time that you’ll continue to work on?
I practiced a lot for vibrato, and it was really weird practicing vibrato because I never had to do it for piano. I think it really helped my tone for the flute. And I really liked my sound after I did those exercises over and over again. So I think I’ll definitely be continuing those exercises in the future.

How has your time at Colburn been overall?
Colburn has been really great. Before I joined Colburn, I was just with a small music school and there weren’t a lot of performances. I love connecting with the audience, and I love performing. So Colburn really allowed me to foster my passion for performing even more. It was great with all the Friday Night Recitals, the School Recitals, and the Honors Recitals, too.

What were some of your favorite performances?
I only got to do Colburn [Youth] Orchestra for one year. So I think there was only one concert before the pandemic hit. That one will always be a really vivid memory for me. Also because I had the Honors Recital on the same day, so I had two big concerts in one day. It was really jam packed, but it worked out. We performed the Nielsen Flute Concerto with another flutist as the soloist, and I think Beethoven. And for the Honors Recital, I performed Eldin Burton’s Sonatina for Flute and Piano.

You’re in both chamber and orchestra. Do you prefer one over the other?
I think they both have their own perks. I really love both. I can’t really choose. I think orchestra is a little bit harder because you have to listen to so many other instruments.

With chamber, I’m in a woodwind quintet this year, so it’s just woodwinds. And I know the other instruments better because they’re part of the woodwind family. So I’d say orchestra is a little bit harder, but I do love being a part of both.

What do you hope to do with your music in the future?
I definitely plan on continuing to play flute, continuing to play in orchestra and chamber music. It’s been a big part of my life, and with how much it’s impacted me, I don’t think I’ll be able to just quit and not play anymore. So I think I’ll definitely carry it on as I transition to college.

How has music impacted you?
It definitely gave me a community to be in, because I grew up in Indonesia and then moved here. When I was in the US, I had a little bit of a hard time fitting in because I couldn’t exactly speak English. But then being part of band really helped me to make friends, for example, because I was really shy. But yeah, it gave me a community that I could be a part of and that I could be proud of too.