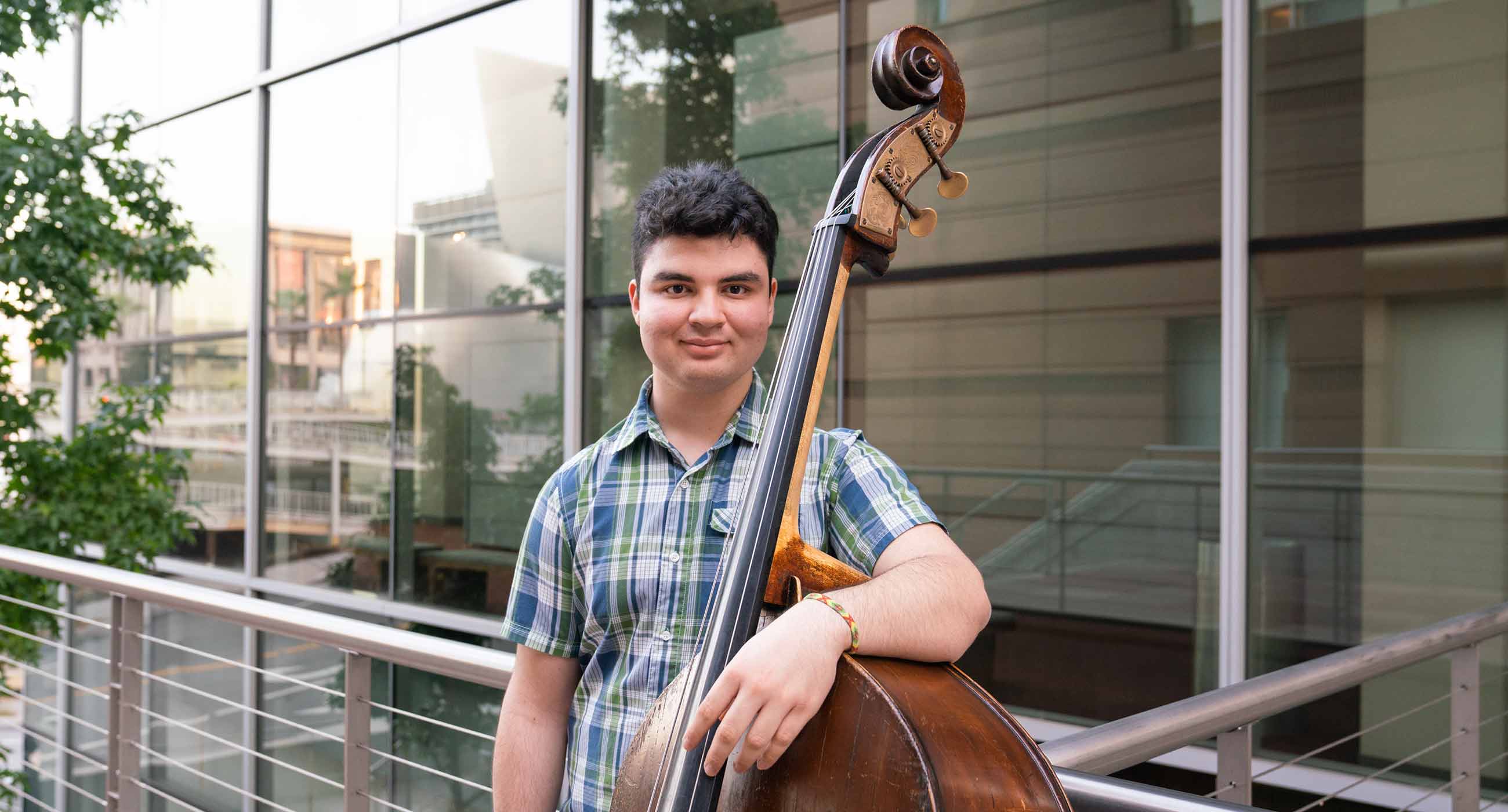 Fernando Serrano-Navarro, 17, studies double bass with David Young and conducting with Maxim Eshkenazy. He is from South Gate, California. This is his fourth year at Colburn.

Why did you start studying at Colburn?
The main influence was probably my sister, because she studied here before me, about seven years ago. She basically recommended David to me and said, you could become really good if you go to this teacher.

You started bass five years ago. Did you play another instrument before that?
No, bass has sort of just been my thing.

Why bass?
Why bass? I don’t know. I like the idea of being able to support the orchestra, just be like that wing man, that backup person.

How did you get into classical music?
Like I said, my sister was a bass player, so I’ve just sort of always been around it. My dad’s kind of into classical music. He listens to that every now and then, and like I pretty much knew Mozart before I knew Drake.

Why do you like studying at Colburn?
The atmosphere is great. The architecture creates a good mood, and the people here are fantastic. There are great faculty and this is just the place to become the best you can be.

The Colburn Chamber Orchestra concert is coming up in a couple weeks. What are you most excited about?
I’m excited for the Strauss Metamorphosen. It’s just this crazy piece that Strauss wrote at the end of his life, for 23 strings. Everyone has to be on top of it, or the whole thing trainwrecks. So hopefully all goes well. It’s been going well in the rehearsal, so I think I’m most excited for that. Plus, I’m first bass so I get a pretty cool part.

What’s the piece like?
It’s hard to describe. It’s not your standard classical piece. It’s out there, and if it’s your first time listening to it, it’s going to sound really kind of strange because it’s totally different from the composer’s style, but it’s hauntingly beautiful.

What’s it like playing with the Colburn Chamber Orchestra?
Everyone’s super talented. There’s not anyone who’s a weak link. Everyone who’s there knows what they’re doing. It’s probably one of the best orchestras I’ve been in. And obviously Maxim, who’s quite the character. I love working under him.

How is it different from the Colburn Youth Orchestra?
[Colburn Chamber Orchestra] is a lot smaller than [Colburn Youth Orchestra], obviously. I think the compactness of the orchestra creates a more intimate feeling. It just feels like you’re playing music with a family, rather than a bunch of strangers. Is that too cheesy?

What do you hope to do with music in the future?
I just want to play it, man. I love music. The main goal is to be a part of a professional orchestra, that sort of thing, but if I can just sustain myself by playing bass, I would have accomplished what I wanted to accomplish as a musician.

Is there a reason you don’t play jazz?
I see a lot of bass players who do both, and then they end up sort of mediocre at both, or if they’re a prodigy they’re obviously really good at both. But I think I just wanted to be good at one thing instead of okay at two things.

Do you have any hobbies outside music?
I play video games, but that’s about it.

What’s with the spice rack thing?
Like I said, I play video games, so I was trying to come up with a username on Steam. I was like, I don’t want it to be generic, I don’t want numbers in my name, so I was like, alright, Spice Rack. Then I was like, I’m going to make everything Spice Rack. So I tried to take Spice Rack on Instagram, but it was already taken. I was like, how can I make this my own, so I just rearranged it and I just got it into rackinwhichthespicesarecarried.