Composer Kris Bowers Got His Start at Colburn 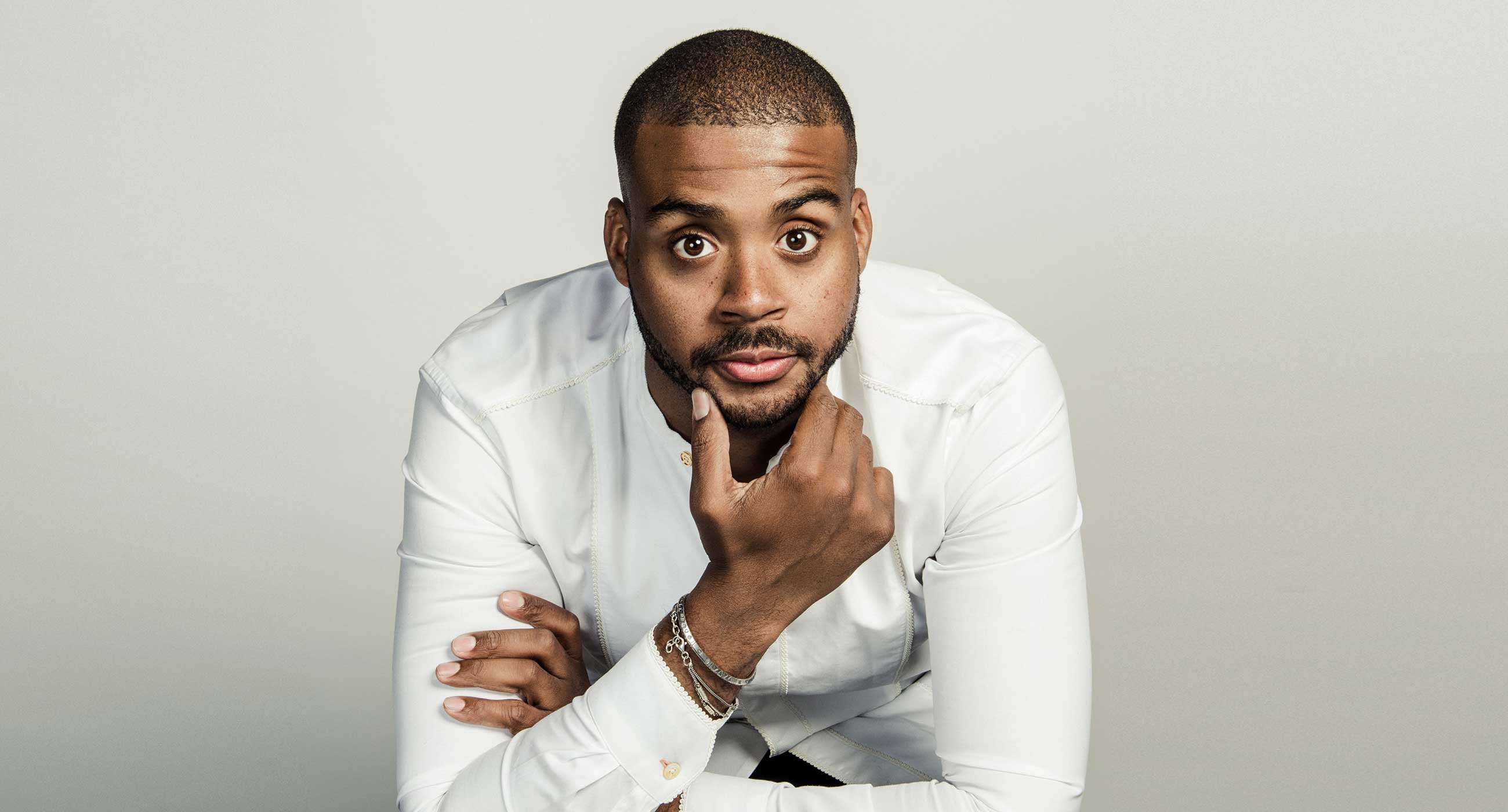 Community School alumnus Kris Bowers, recently recognized for his work on this year’s Oscar Best Picture winner Green Book, began exploring his love of jazz and composition right here at Colburn. He credits his time in Lee Secard‘s Colburn Jazz Workshop as instrumental to his current work as a musician and Emmy-winning composer.

How did you get started at Colburn?
It was really something that my parents came across and found through talking to other music parents, and doing their own research. They aren’t musicians at all but, they decided before I was one they wanted me to play piano. They did a really great job of finding the best teachers that they could, and the best schools.

So, one day they just told me we were going to go check out a new school downtown called Colburn, and we went for a tour, and shortly thereafter I started my lessons there.

What your experience here like?
It was pretty incredible. I definitely think that it’s a big reason why I was as prepared as I was to first, go to my high school, an arts high school called LACHSA. But, also to go to Juilliard, because I was already working on a pretty high level, or at least an intense level at an early age.

What was the impact that studying at Colburn had on your musicianship and career?
The theory class that I had when I first started is the reason why I, very early on, was able to understand how to improvise with jazz, and how to approach composition. That’s also why my ear was as good as it was because, we had to do so much ear training in that early theory class. All of that is what laid the groundwork for my composition abilities and techniques.

Also, just this seriousness with which all these students took music. Being surrounded by a bunch of other kids that were just as serious, if not more serious than I was, was a big driver for me. I think that had I not had that environment to grow up in, I probably would have convinced myself that my time was better spent playing outside, or doing something else. My focus on music really came from the fact that I felt like I needed to keep up with all these other amazing musicians that I was in school with.

What was it like playing in Lee Secard’s Colburn Jazz Workshop?
It was the first place that I actually got to exercise my interest and my abilities with composition. I remember that was the first time that I ever wrote something that I heard a band play. I had written a couple of things for piano that I played by myself but that was the first time that I wrote something for a band to play, and that we actually performed. That was a pretty fun experience to start to have these ideas, and then hear them actualized by really talented young musicians was really fun.

Then on top of that, Lee was really the person that built the foundation of my knowledge of jazz history, my jazz collection itself.

You started in classical piano but, then you transitioned to jazz. Why was that?
Mainly because, I think my attention span with classical music was starting to wane a little bit. At that age, I wasn’t really trying to listen to classical music in my spare time, and I wasn’t that excited about practicing it. But, I did enjoy the fact that I was getting definitely better at piano.

One of the things that I was already starting to do was learn how to play things by ear, like songs on the radio, or how to play these early compositions of my own. So, I think that with all of that, my parents put me in jazz because, they thought that it might give me a little bit more freedom, and a little bit more of the tools I needed to express myself musically. I could improvise, or I could further my composition interests.

What are your thoughts on the relationship between classical and jazz?
I wish that it was explored a bit more in education. I think both can help the other so, so much. I feel like the classical repertoire, especially as a jazz musician, helps with your technique, your facility on your instrument.

Classical is much more about the technical side of performance. Jazz is a little bit more about the expressive side. I personally wish I had taken my classical lessons a lot more seriously when I was younger because of that. I could have been a better piano player, and vice versa.

I think that as a jazz musician you have to be incredibly knowledgeable of music theory to be able to improvise freely, and to be able to express yourself over all these different chord changes, and these complex harmonies, and be able to change on a dime. I feel like classical musicians would be more comfortable doing that if they were given some jazz lessons as well.

Did your classical training come back to you when you were working on Green Book?
Yeah, for sure. Don Shirley, the way that he approached piano playing, was much more like a classical pianist than a jazz pianist. Like the touch that he had, the sound that he got out of the instrument. Even his feel and just the rhythm of it, a lot of it leaned a bit more towards classical than it did. It wasn’t really that swung of a rhythm in terms of how he played.

I also had to play the Chopin etude at the end. I actually never played that piece myself when I was studying classical piano. I definitely was thinking back to a lot of my classical lessons, and time working on that music when I was working on Green Book.

What was it like transitioning from school to a career as a working musician?
On one hand, it was pretty easy given how intense the schooling environments I had were. From Colburn and LACHSA to Juilliard, everything is pretty intense in all those spaces as far as what’s expected of you, and what’s required of you. So by the time I got into the real world, this intense workload felt pretty normal.

The other side of that is, they can’t really teach you how to be your own boss or how to be a band leader. Essentially as a musician, you’re kind of an entrepreneur. You have to figure out how to pay for all of this stuff, like when I started going on tour, and realized that I needed to figure out how to pay for my whole band to go on this tour. You don’t get paid from the gigs until after you’ve done the gigs, so how do I get that capital up to be able to do that, or navigating talking to lawyers, or my first manager, my first agents.

You can’t really learn in school, you have to learn on the job. But, I think that’s something that can always be talked about a bit more in schools. I think it will help prepare students when they’re in the real world with all the other things that they’re going to have to navigate outside of just being really great at their instrument.

How was the process of first getting gigs after finishing school?
Lee Secard’s class was pretty helpful, because he set it up to feel like a gigging band. One of the biggest things I learned from him was that, there were a couple of times where I was late to a sound check at Colburn. When I walked in, I told Lee immediately, I’m sorry for being late, my parents, it’s their fault that we’re late, and they’re the ones that were running late this morning.

He essentially told me that’s not a good excuse because it’s my responsibility, and not my parents’ responsibility, to make sure that I’m on time because, this is my gig, you should treat it like it’s a professional thing.

It was a pretty big learning experience because at that moment, I shifted my mentality a little bit, and started to take more ownership of my responsibilities in that ensemble, my dedication to the ensemble. I can’t look at this like I’m just a kid that doesn’t have any sense of agency.

I think that immediately transitioned into my thought process when I started getting my own gigs as a band leader. Actually, my basses and my drummer both came from that band when we first started. We took it incredibly seriously, and I think that all came from how Lee Secard ran his band.

Any advice for jazz students here who might want to do something like what you’re doing now?
To figure out whatever it is that they’re most passionate about. I think that one of the things that you can get distracted by in school is this idea of being a jack of all trades, and this idea of being good at everything. You’re concerned about the real world, and how you’re going to get hired, and feel like you have to be incredibly great at everything to do that. While that is helpful of course, especially when you’re first starting off, I think what I’ve found even more valuable is what I happen to be a specialist at. Things that I spent the most time studying.

So, for me with film scoring, I’ve wanted to do that since I started at Colburn. Since I was nine, ten, eleven years old, and I started building this classical collection, and this jazz record collection. I was also listening a lot to film score music. I was already pretty obsessive about studying it, and trying to understand the compositional approaches, and the sounds, or the technology behind it.

That’s not going to be the same for everybody. But I think that young students should really take the time to think through what it is that they’re most excited about with their craft, what career path or eventual job they would be most excited by, and then do everything they can to study that.