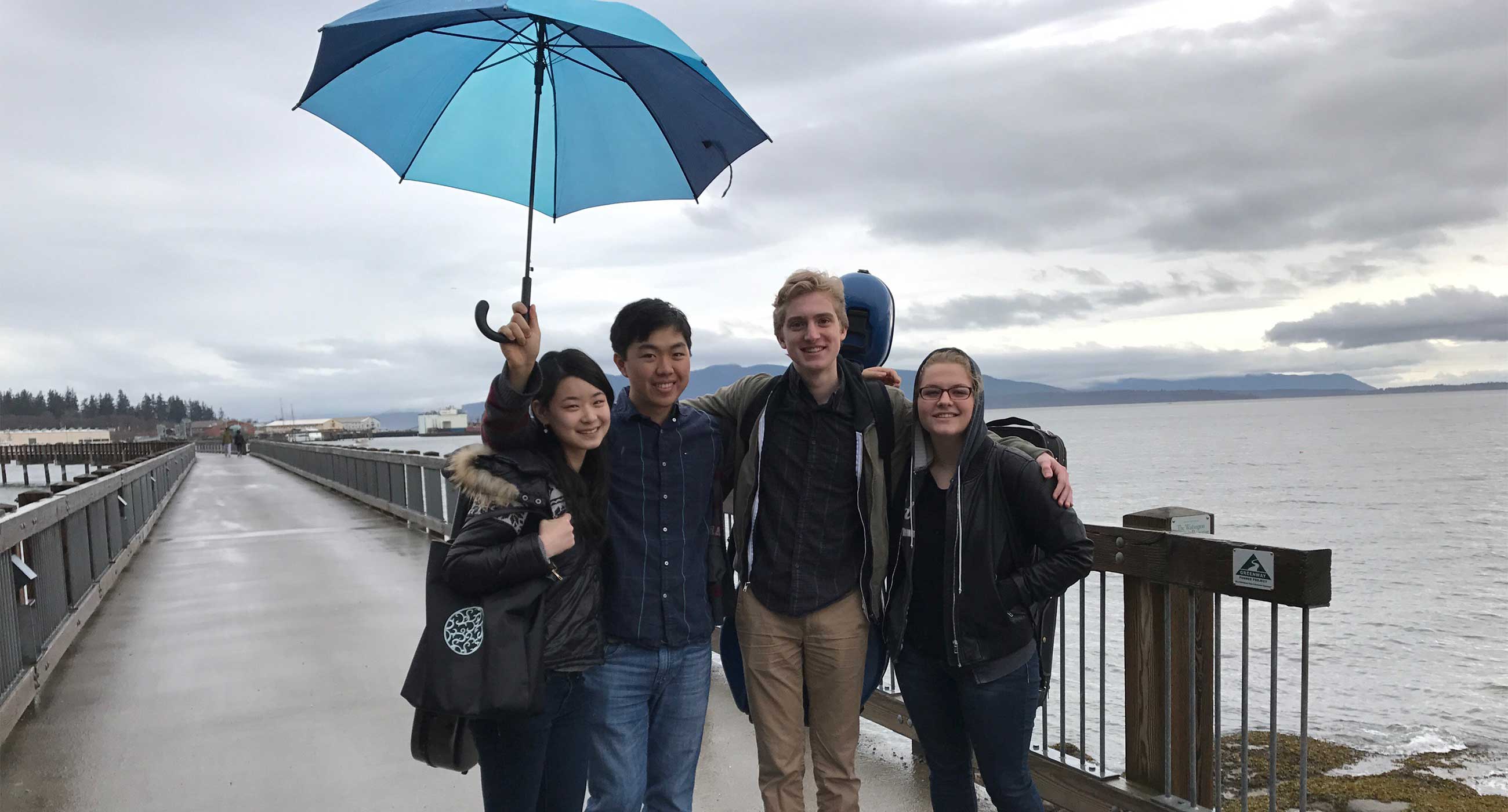 “This is the most important thing we should be doing in terms of getting new audiences,” said Lucy Wang, reflecting on her spring break in Bellingham, Washington. “Going into schools is a great opportunity to expose young students to classical music.”

Lucy, along with her fellow Viano Quartet members Hao Zhou, Johanna Nowik, and Tate Zawadiuk, spent a week at the Bellingham Festival of Music this March. They are the sixth ensemble from Colburn to participate in the Play it Forward Chamber Music Residency, which takes place every year as a part of the festival and brings young musicians to middle and high school classrooms throughout the county.

They visited 16 classrooms total, performing Mozart, Ravel, and Bartók for music students of varying levels. Besides developing their stage and teaching techniques, the quartet discovered the importance of outreach in schools. Not only did they expose young students to classical music in general, but they were also able to break down preconceived notions about how it’s not just Mozart. The quartet tried to expand the students’ perception of classical music by introducing them to less traditional composers like Bartók. “Even if they don’t like it, it gets them thinking about how different classical music can be,” Hao observed. Fortunately, when Lucy described the Bartók string quartet they performed as the “heavy metal of classical,” the many middle school Metallica fans responded enthusiastically.

Lucy, Hao, Johanna, and Tate also grew to appreciate the classroom as a space for teaching and dialogue, unlike the concert halls they are used to playing in. “It’s important to talk about a piece before you play it, especially if you’re performing something complicated, or there’s something you don’t want the audience to miss,” said Hao. “If you take five minutes to explain the background of a piece and what to listen for, people will enjoy it more. Once the kids had something to latch onto, it was amazing to see how quickly and easily they expanded on those ideas.” And, unlike in a concert hall, the students were able to express their thoughts about the music without fear of acting inappropriately.

Just two days after the quartet came home, they were able to bring back what they had learned in Washington to a house concert where they first talked about, then played a Dvořák string quartet. After they performed, an audience member came up to them to say that their explanation in the beginning gave her the confidence to express her opinions about the piece and that without it, she would have thought her interpretation was wrong.

By initiating a conversation before playing, the quartet created a connection with the audience and the opportunity for audience members to become more than just passive listeners. “A lot of the comments we got aren’t things that are usually expressed. People feel unconfident because other people will come back and tell them, ‘You’re wrong.’ So the kids were really happy that we included them and gave them that chance,” Hao explained.