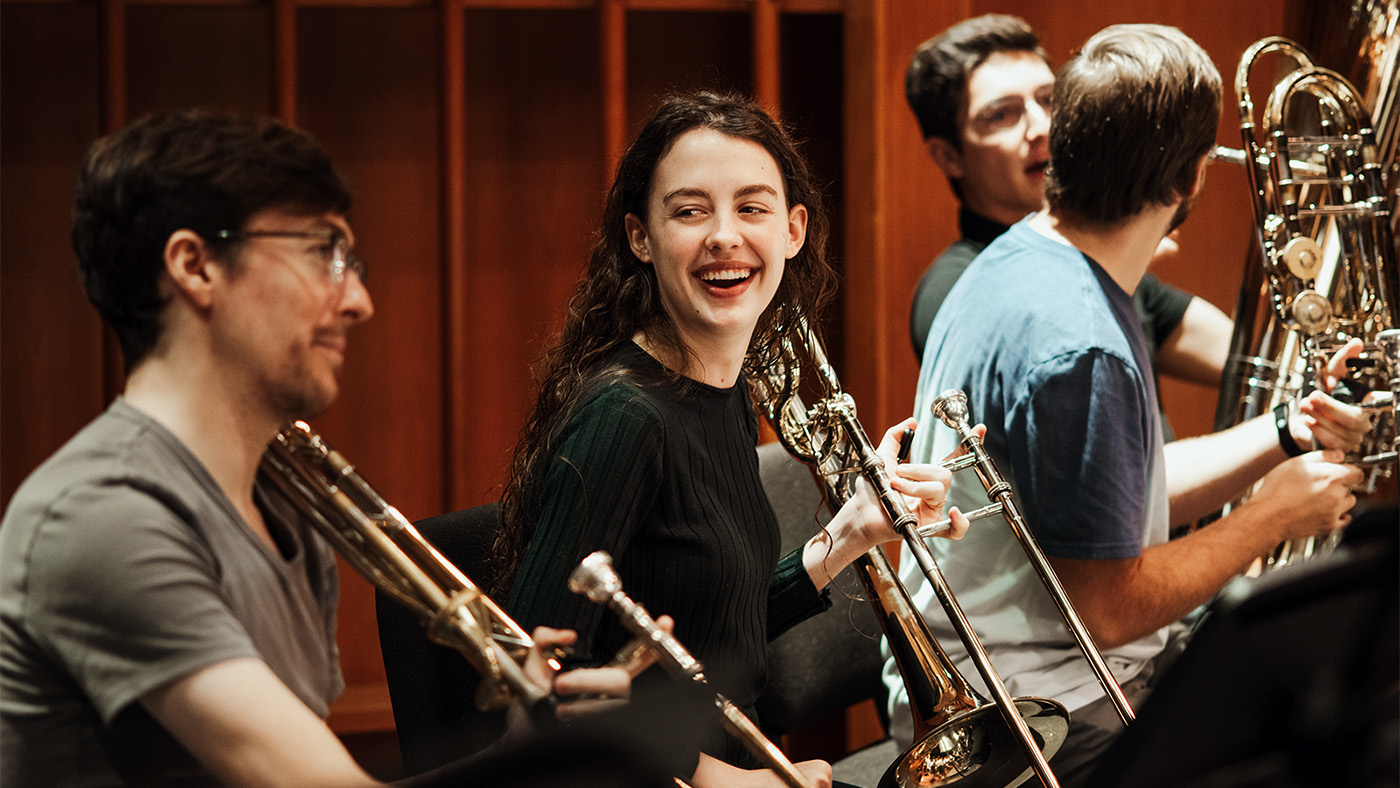 Gracie Potter studies tenor trombone with David Rejano and is in her third year of her Bachelor of Music degree at the Colburn Conservatory.

How did you come to Colburn?

I started playing trombone back in fourth grade, so going on 10 years now, which actually sounds like a long time to me. My parents told me when I was maybe four or five—super young—I saw this cartoon of an octopus playing a trombone. And ever since then I would say, “I want to play the slidey thing!” I didn’t know what it was called, but I was going to play it. Then in fourth grade band, my mom brought home my first tenor trombone!

I actually graduated high school a year early, because during my junior I had a lesson with Mark Lawrence, who was the trombone professor here at that time. I had two lessons with him and the second one was closer to when pre-screening audition tapes were due, so we asked him if there were going to be spots open during my senior year, and he said, “No, there’s just three trombone spots open for next year.” On the drive home, it clicked those three spots were actually going to be open at the end of my junior year. So then it was the whole process of trying to figure out if I could graduate early with auditioning early. So I only auditioned for Colburn, because I really wanted to study with Mark Lawrence. I ended up getting invited to the live rounds, and I was super lucky because that was right before the shutdown. Having my audition in person was so nice, just to be here at Coburn. And also, since Mark Lawrence ended up announcing his retirement about three days into the live auditions, I got to meet David Rejano, who’s now the current professor; he’s absolutely amazing. So it really worked out perfectly.

How long have you been a member of the Colburn Orchestra?

I’m currently a junior, so I’ve been a part of the Colburn Orchestra for two years. Though my first year was over Zoom, so that was kind of a non-existent [performing] year. I love the Colburn Orchestra, everybody here is at such a high level that it makes it really fun to work with. It’s just a fun time to meet people and musicians from around the world.

How is performing in an orchestra different for you than performing as a soloist or in a smaller ensemble?

I think there’s a big difference from being a soloist and then being in an orchestra because when you’re in an orchestra, you have to rely on the people around you a lot more. You have to listen to them, you have to blend. Intonation is a big deal in a section. I think really listening—even listening to the piece before you rehearse—is really important, because then you can start hearing: the oboes have this, I need to listen for this; that’s my cue. If you’re not listening to each other and really playing as an ensemble, it will fall apart. As a soloist, you’re more focused on yourself, and blending with the orchestra too, if you’re playing with one while making sure they’re on time with you and you’re on time with them.

As the Colburn Orchestra works with excellent conductors such as Yehuda Gilad and James Conlon, including those from our conducting program, what are some ways that a conductor helps the orchestra or more specifically you individually?

It can be easier to have a connection with the Conducting Fellows because you go to school with them; you see them outside of orchestra, you can create a relationship with them. Whereas when Esa-Pekka Salonen comes in, you don’t just go to lunch with him afterward at Colburn Café, you know? With the Fellows, it feels like team building because whenever they conduct, we’re helping them get experience, just as they’re helping us get experience with all the different pieces. It’s a give and receive.

I honestly didn’t realize until I got here how different each conductor’s style is. You get to know their style; you get to know how musical they are; and you learn the way they put their own stamp on the music.

A conductor can make the entire experience just so much better, a calmer environment. It’s very nice when you have a clear conductor that’s for sure.

How does the Coburn Orchestra as a whole start rehearsing for a big performance like the upcoming concert at The Wallis? What does the process look like?

Usually, we have each section rehearse in sectionals with our teachers. So we have all the trumpets, horns, trombones, and tuba together. And then the woodwinds have their own, the strings have their own, just so we can all get a sense of the piece in our section, get our ears listening to our surroundings. And then what will usually happen is maybe a week before the performance, we’ll start having large ensemble rehearsals. We’ll have coachings: some of the teachers will come into the orchestra rehearsals and then at the end of the rehearsals they’ll pull their students aside and give them feedback. There is an intensity to this. On top of orchestra, we all have our own competitions that we’re doing, and school work that we’re doing—so it can be pretty intense sometimes. Everybody’s super busy the week of an orchestra cycle.

What kind of experience would you want a member of your audience to have?

I want them to enjoy the concert, first of all. I feel if there’s any type of stress when listening to an ensemble, that’s not a good thing to have. I want the audience to relax and enjoy it, listen to all the different aspects of the piece and make a personal connection to it, too. Everybody has their own life and everybody can connect differently to a piece. I really want the audience to enjoy the moment and take something away from the performance that can maybe even change their life; make them want to start playing music, or even just start listening to more classical music.