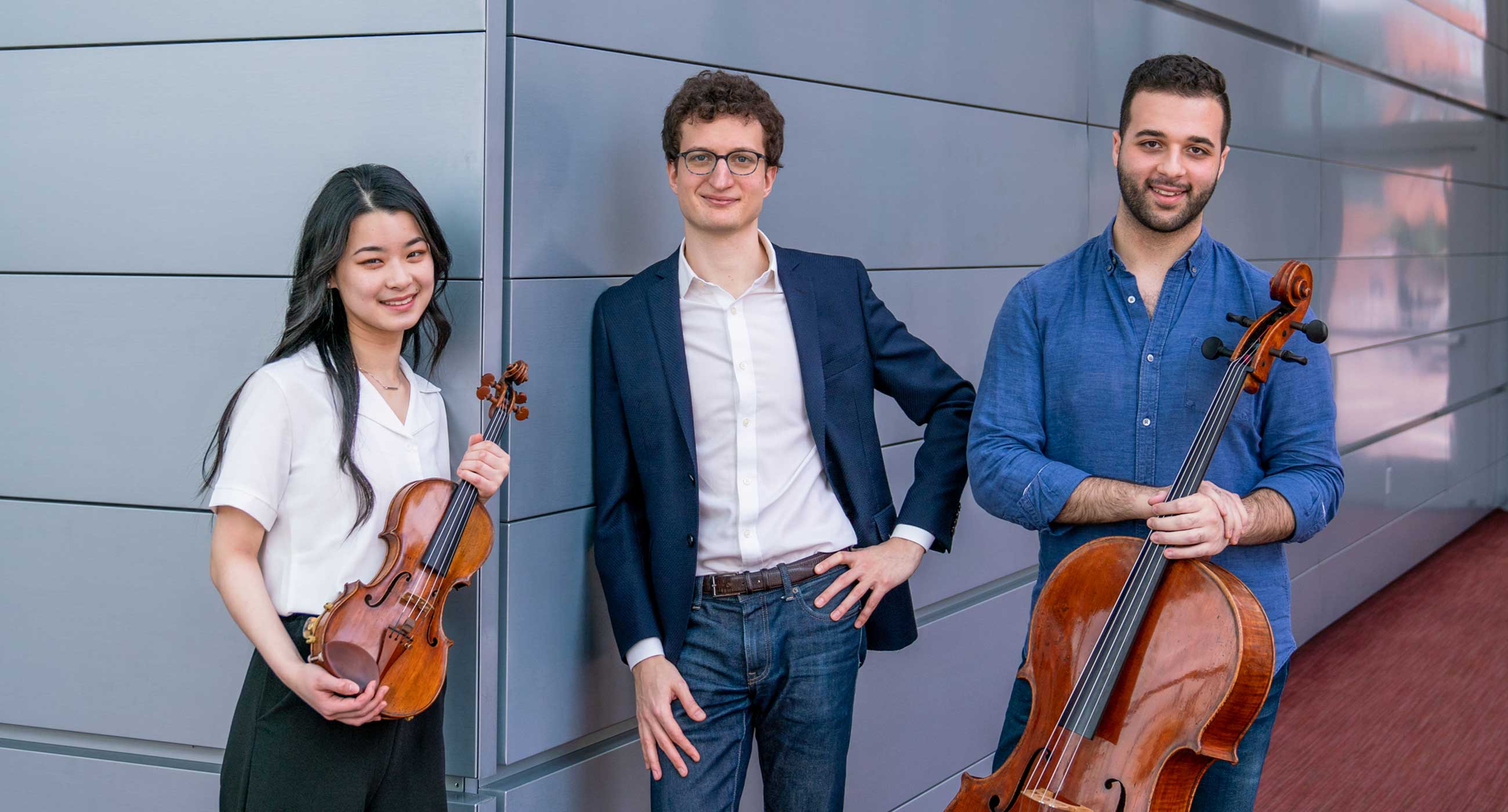 For seasoned Conservatory students Lucy Wang, Ben Solomonow, and Rodolfo Leone, this Saturday’s Colburn Orchestra concert at Walt Disney Concert Hall is another step in their careers as musicians. They’ll perform Beethoven’s Triple Concerto with the Colburn Orchestra, conducted by Xian Zhang of the New Jersey Symphony Orchestra, which will be followed by Rimsky-Korsakov’s colorful and dramatic Scheherazade.

Although Ben and Lucy have played numerous times at Disney Hall as part of the orchestra, and Rodolfo as a soloist in 2016, Saturday’s concert will be an exciting opportunity for them to perform with each other. “To be able to play with our friends and peers in such a wonderful hall is a great opportunity and pleasure,” said Ben.

The Triple Concerto makes this program particularly special, since it features three soloists. It has elements of chamber music, but on a large scale with an orchestra and a conductor too. The piece is acrobatic, joyful, and humorous at times. “It’s one of the most gorgeous cello concertos that we have,” said Ben. The lush second movement balances the outer movements, and the third movement finishes the piece in a lively Polish style.

With three soloists, Lucy, Ben, and Rodolfo’s preparation process had an extra layer of complexity. They not only had to learn their individual parts, but also how to fit them in with each other’s. After they were able to sound like one cohesive unit, they could then put it together with the orchestra part as the final product. “It’s a three step process,” Lucy explained.

As the pianist, Rodolfo also faced an extra challenge. “The funny thing is that I’m almost expected to also play the orchestra part when I’m not playing my part. It’s fun, but also at times kind of messes with my head. Which part am I doing? Is it my part, is it the orchestra part?” he shared, chuckling. Fortunately, adding a second piano accompaniment and the orchestra later on in the process helped.

After Saturday’s concert, the students will immediately transition to their next performance priorities. As students of the Conservatory, their education is performance-focused, and much of their time spent pursuing their artistic goals. All members of the Colburn Artists roster, Rodolfo is working on his solo performance career, Ben on “a little bit of everything,” and Lucy on building the Viano String Quartet with her classmates.

Next, Lucy and the other Vianos will perform with renowned Georgian pianist Elisso Virsaladze on the March 8 Colburn Chamber Music Society concert. Ben will continue preparing for his solo recital at the end of the semester. Rodolfo will perform Mozart’s Piano Concerto No. 21 in C Major with the Pasadena Symphony. “Just one thing at a time,” advised Lucy.

Don’t miss Lucy, Rodolfo, and Ben performing with the Colburn Orchestra at Walt Disney Concert Hall on Saturday, March 2. Get your tickets today.