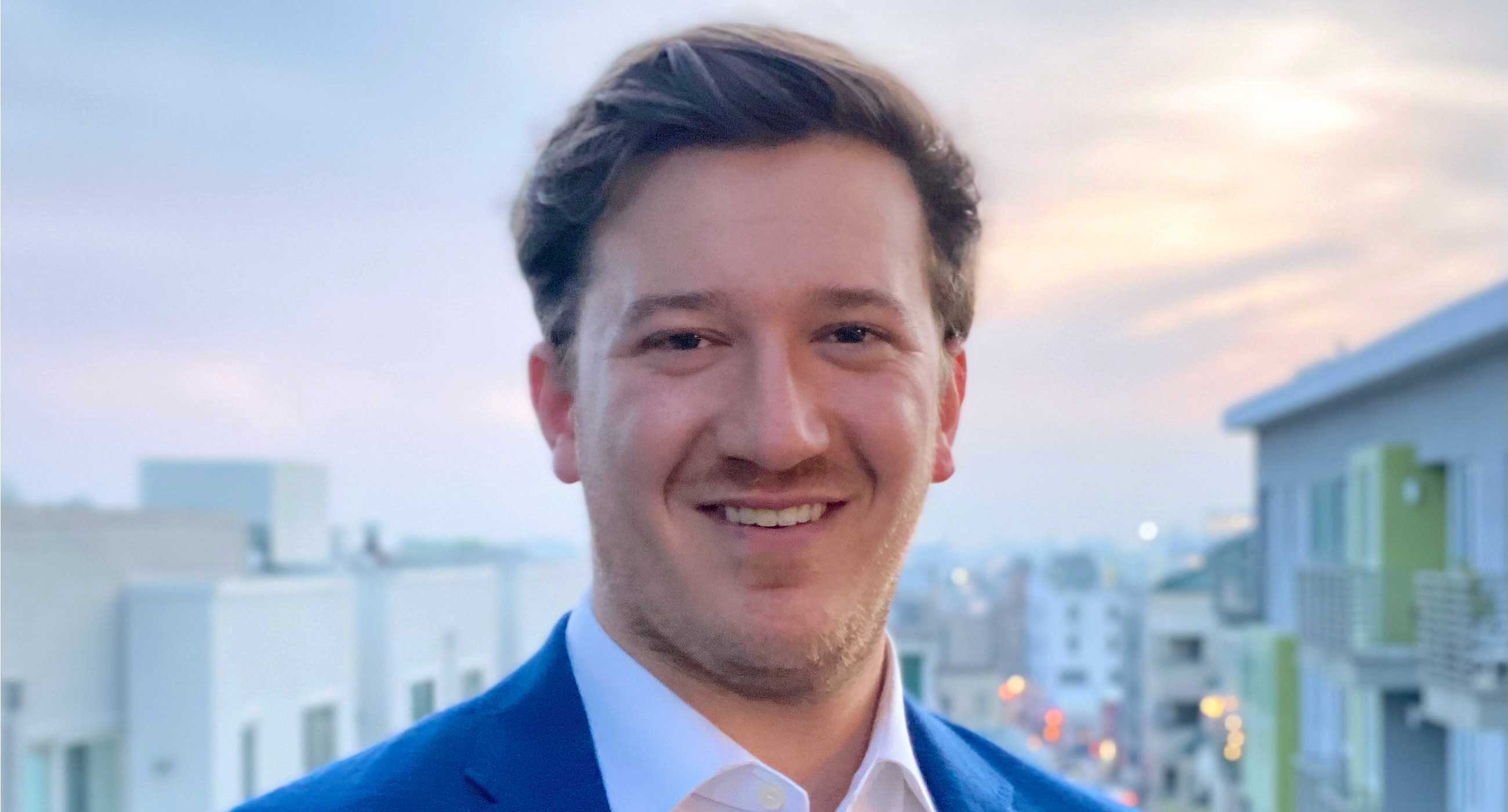 Adam Millstein, 26, studies violin with Robert Lipsett. Formerly a Community School student of five years, he returned to Colburn for his Master of Music and Artist Diploma after earning his bachelor’s degree from the University of Michigan.

This interview has been edited for length, style, and clarity.

How did you start playing the violin?
When I started, I was actually living in Florida at the time. I was there for a couple years because of my dad’s work. One of my earliest memories is a music class when I was four years old. I was super drawn to the violin in particular; I don’t really know why. And I remember being seven, I was like, yeah, I would love to do this. My school offered it and it just developed from there.

As you started playing, what did you love about the violin?
I was so obsessed with the repertoire of the instrument in particular. From a very young age, I would listen to CDs on end of all the great violin masters. We became so obsessed with the different concerti and the sonatas in the repertoire. I always had this goal of being able to play the violin well enough to play some of the things that I loved listening to so much and loved seeing on stage. So falling in love with the repertoire in particular was something that kept fueling the fire, wanting to learn how to play better and better so I could actually conquer some of this music eventually or at least attempt to in my life.

When did you realize that you wanted to do it professionally?
When I was 12 years old, I went to Interlochen. That was a very formative experience for me, going there for three weeks, my first sleepaway camp, and then being exposed to all these other amazing young, talented musicians. I was just so inspired by that environment and playing with an orchestra for the first time. I think I played Rimsky-Korsakov’s Russian Easter Festival Overture. It was my first time playing with a full string section, full winds and brass, full percussion. I remember going home being like, “I really want to do this. I really want to go for it.” So that’s what started it, and I was very fortunate to have parents who to this day support my musical pursuits.

What was your Community School experience like?
I had an amazing Community School experience. It was really inspiring—not only my lessons with my teacher Danielle Belen, who I ended up studying with in Michigan as well, but also my orchestral experience there. I still have friends today that I met when I was in ninth grade and that I hang out with to this day. It’s pretty cool because of the way classical music works too, especially if you stay in the field, you just keep running into people that you met years and years ago through all these different music festivals and schools and stuff like that.

I also worked with Maxim Eshkenazy a lot. He was my conductor back then. He made a very profound impression on me when I was younger and concertmaster of those orchestras. And then later in life, we went on tour in Bulgaria together multiple times.

Another big thing for me was working with Ida Levin when she was alive. She was just such an intelligent and sensitive and wonderful musician and teacher. I worked with her for three years as part of the Honors Quartet in the Community School.

So between private lessons and orchestra and chamber, it was a really cool experience to have in between my pretty rigorous, academic high school experience. So yeah, it was very formative actually, now that I look back on it with 20/20 hindsight.

What brought you back to Colburn after undergrad?
It was always a goal of mine to come to Colburn for graduate school. I always had the idea that I would do a university for my undergraduate and then go to a conservatory for graduate school, preferably Colburn. My teacher in high school and then at Michigan, Danielle Belen, was a former student of Mr. Lipsett and was his assistant. So there was always this idea I had in mind that it’d be really great to work with him in particular and go to Colburn with the environment which I had been exposed to at the Community School, and just the intensity and the high level of performance that exists uniquely at Colburn.

What are some of the things that led into your professional development as a Conservatory student?
Well first and foremost, my studies with Mr. Lipsett were really important, especially the studio class experience and the environment that he fosters amongst the studio. There’s this expectation of excellence which is just felt by everyone, not in a top-down enforced way, but everyone intrinsically wants to play their best and are palpably inspired by Mr. Lipsett’s incredible teaching. My studio mates are all amazing and it’s super inspiring to see how they perform and to observe their world-class technical and musical abilities. It inspires me a lot being there and then also playing for them. The high intensity of Studio Class in particular has been a really integral part of my development that supplements of course my one-on-one lessons with Mr. Lipsett.

And then, the chamber music at Colburn has been outstanding. I’ve had wonderful groups and wonderful coaches and the [Colburn Chamber Music Society] experience of playing with [Conservatory faculty] Martin Beaver doing a late Beethoven quartet. And then over the pandemic, I played the remarkable Weinberg piano trio with [Conservatory faculty] Clive Greensmith and Dominic Cheli, alumnus of Colburn.

Of course, orchestra has been incredible at Colburn too. Working with Yehuda Gilad, Esa-Pekka Salonen, and many other renowned conductors that are brought in—it’s just an amazing environment. Being exposed to all of these different elements of world-class performance prepares you for the professional world. Having all those performance elements in a place like Colburn definitely helps you propel to the next level.

Recently, you’ve been working on the Recovered Voices 2021: Schulhoff and More project. What has that been like?
The Ziering-Conlon Initiative for Recovered Voices is a fascinating program I want to bring attention to that I believe is integral in creating the whole Colburn environment. It’s been a really life-changing and career shifting thing for me actually. I was exposed to the Recovered Voices Initiative when I played on a concert with the former director of chamber music, Scott St. John, and another student at the Thomas Mann House. We played a concert there and I remember James Conlon spoke and he really unpacked what the mission of the Recovered Voices Initiative is, which is to perform and promote the music of composers who were suppressed as a result of Nazi policies from 1933 to 1945.

I was so inspired by that particular event that it just wedged into my mind. And when the pandemic hit, I found myself with more time to actually explore this body of work and this area of musical history. I got really deep into the Recovered Voices composers, and as a result I was connected with Bob Elias, who is a fountain of knowledge. He has become a profoundly important person in my life also and has assumed a wonderful role as a mentor in exploring these composers and helping me with different ideas that I have of performing this music. In this past year, we worked on a lot of the music of Erwin Schulhoff and recorded eight of his works, which is all coming out this year, and that’s been amazing.

It’s been wonderful too because not only have I been working so much with Bob Elias, but I’ve also been put into direct contact with James Conlon which has been truly life-changing for me. I’ve been learning so much from him about this body of work. We’ve been collaborating on repertoire and artistic choices for programming with Recovered Voices this upcoming year and we recorded multiple pieces together last year. It’s been a very important thing for me working with James Conlon who has inspired me so much, just being able to experience his tremendous artistry and intellect first hand.

What’s the personal significance of the project for you?
These composers deserve to be heard and they deserve to be known because I think there is so much amazing music that they wrote. It’s a lost treasure trove of music from the 20th century. It feels like you are uncovering works by your favorite composers that you never found before. So it’s like playing new music but it’s in the style of the greatest composers of the 20th century. They act as this missing link and this conduit between all these different aesthetic styles in Western art music.

It’s so unbelievable to me that we don’t know who they are, but this is because of the actions of the Nazis in the 1930s and 40s. They tried to wipe these composers off the face of the earth and also their legacies, and they destroyed the cultural gardens in which they flourished in Europe at the time. And so we now don’t know who a lot of them are, like Schulhoff or Weinberg or Schreker or Zemlinsky, and they aren’t part of the canon. That’s something that I feel very strongly about undoing because I think it’s necessary when there’s injustice for it to be corrected, of course.

And then also fundamentally, I aesthetically believe in this music very, very strongly after going through it and listening to it and playing it so much. I really believe in these composers and I want to get them onto the concert stage and accepted as part of the canon as much as possible. So it’s held that kind of significance for me as an artist and also as someone who’s so passionate about music.

You mentioned that the project has been career shifting. What has that shift been?
Recovered Voices has shown me how much I want to pursue a deeper study of these composers and to become truly an expert as much as I can in this area. And potentially in my dream of dreams, I’m thinking about maybe pursuing a DMA or a doctorate with a performance focus in these composers.

I could see myself hopefully in the future incorporating a multifaceted career, not only with the traditional kind of performance avenues which I need to have in my life, but also doing more things like I’m doing right now with Recovered Voices, which is more curatorial. I would also love to get into academic research and potentially even teaching in this field of the Recovered Voices composers.

Anything else you’d like to share?
I’ve felt a lot of support at Colburn from all levels of the School which I think is really unique. So I love all my colleagues at the School, my teacher, all the other teachers at the School too. There’s a very nurturing environment too, of musicianship.

I’ve also found, especially with my passion for Recovered Voices, it’s been amazing to see how much the teachers and my colleagues at the School have been so receptive to it. Working with Bob Elias and James Conlon has just been amazing, and Annie Wickert, [Vice President of Advancement], has been an incredible person to get to know and to work with as well. It’s been a really exciting thing to experience this kind of support as I continue to develop as a professional.