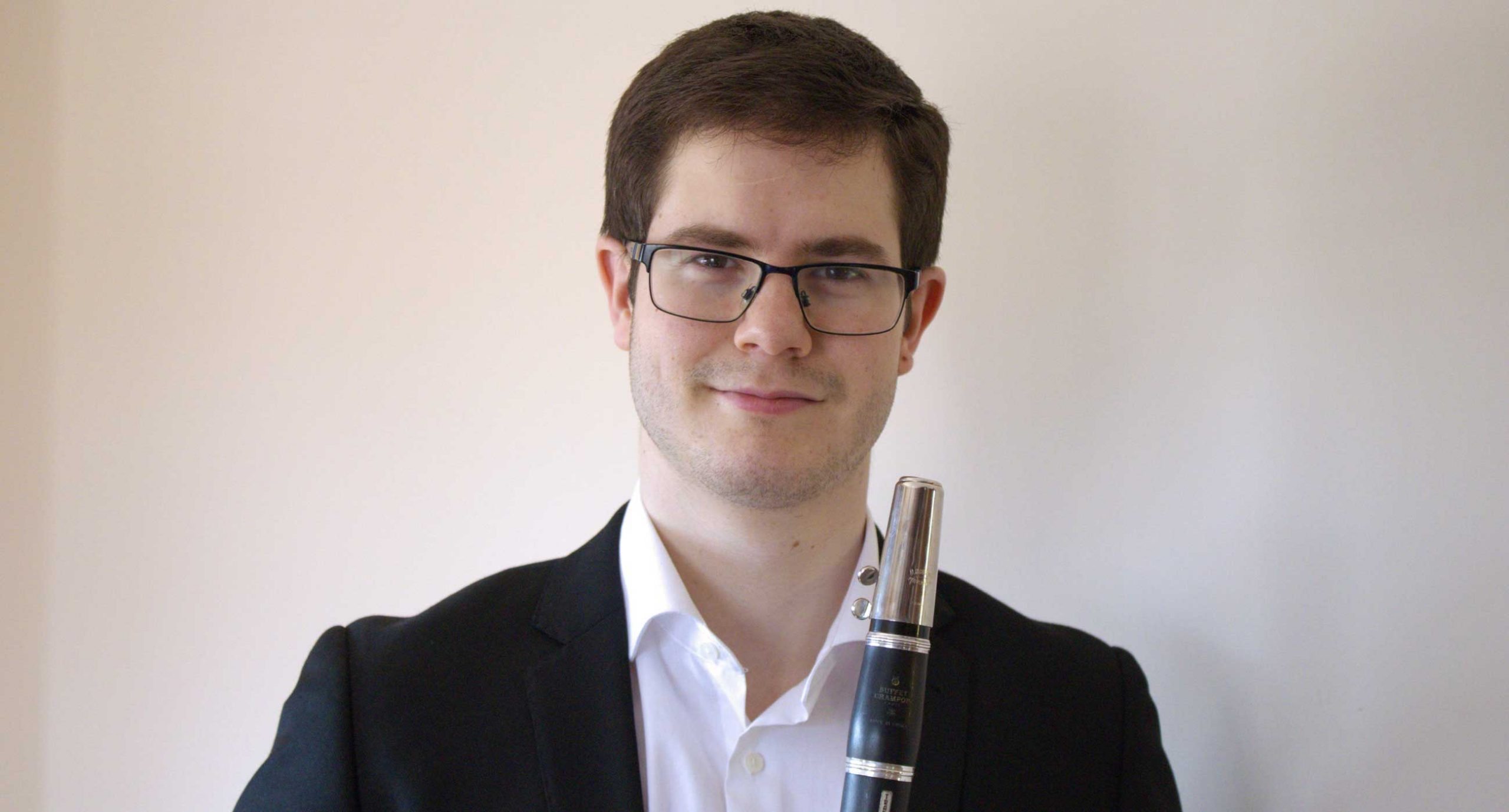 Ángel Martín, 21, studies clarinet with Yehuda Gilad. Ángel, who is originally from Toledo, Spain, is in the third year of his Bachelor of Music degree at the Colburn Conservatory.

How did you start playing the clarinet?
What happened was that I watched a movie, Home Alone, when I was eight years old. In one of the last scenes, a band of musicians was playing in the movie, and one of the musicians was a clarinetist. When I listened to the sound, it was so good. It was so good to me that I was convinced to start practicing that instrument.

So for the next academic year, I told my parents, ‘Hey, I want to play this instrument.’ I was so convinced that I wanted to play it that I actually bought one, even though there was no clarinet to borrow at my music school.

I spent three years at the school and then I moved to Toledo to the conservatory for another six years. Later, I started my bachelor’s in Spain and then continued in LA.

How did you decide that you wanted to pursue music professionally?
Maybe after three years or so when I started my pre-college degree, I was pretty sure that I wanted to pursue this kind of career because I was doing well. My teachers were very good and supported me a lot, and my family too. Sometimes talking about [a career in] music and art is taboo; it’s like, you should be a doctor or a lawyer or whatever. Their support was very important for me.

And then, not just being in school, but having some competitions and playing in orchestras, made me realize that I wanted to pursue a musical career.

What about music was it that spoke to you?
It’s so interesting when you go somewhere to play for a concert and an audience listens to you. That moment, that act is so good. I was fascinated about the fact that I could express my feelings through a musical instrument, through the sound.

At the time I was thinking that actually, life was better with music. Music was capable of making you laugh or be sad or be brave; I wanted to express that with the audience, so the audience, regardless of their background in terms of status or knowledge about music, could be together and listen to you as a unit. That was the major idea behind that.

How did you decide to study at Colburn?
I’ve known Mr. Gilad [Yehuda Gilad] since I was 13 or 14. Actually, he loves Spain because of the weather, but especially because of the food. He had a lot of Spanish students in the past, so he went to Spain very often to give master classes, courses, and seminars. The teacher that I had in the conservatory in Toledo was one of Mr. Gilad’s students in the master classes. He introduced me to Mr. Gilad.

I started getting to know Mr. Gilad, and I felt that he was great in terms of teaching and motivation. That was the main reason why I ended up at Colburn, because I really wanted to study with him.

Before applying to Colburn, I learned a little bit more about the school, and it was so good. I was so impressed that Colburn was so good regarding scholarships and location, and had all kinds of artistic excellence as well. I fell in love with my teacher and with the school as well.

How has it been at Colburn?
For me it wasn’t just Colburn, but the transition from Europe to America. The culture is different, and it was a fascinating shift. My time at Colburn, besides this year on Zoom and with the laptop, was great because I started knowing things about America that I didn’t know before. For instance, when I first arrived in LA to stay there, I didn’t know about the diversity within the community in LA in general.

More specifically about Colburn, I really liked, similarly, the diversity within the school body. Many people came from Asia, some people from Europe, many American people as well. It was great living with the other students, because the relationship with them is quite different than if you are living off-campus.

What have been some notable experiences at Colburn?
For me, it was pretty different to have a weekly Performance Forum. That was a great experience because all the student body, the teachers, and the administration were there, which is pretty exciting.

Many of them know a lot of music, so they’re very hard judges in some ways. That is a kind of experience that you don’t have everywhere; it’s not the same as if you are playing a concert for other people, for a regular audience. I think that was very good.

Also, the performing opportunities in terms of chamber music. I was very lucky because I played on Concerto Forum last January. I was the soloist with the Colburn Orchestra. That was very exciting as well. It was my first soloistic appearance in America and in LA.

You’ve also won several competitions this past year.
Yes, I won the Vandoren Emerging Artist Competition, which was my first achievement in an American competition. Vandoren is a major clarinet brand, so it was a very important competition for me. I also got second prize in the Pasadena Showcase Competition.

This year I won a clarinet competition online, and I won another competition two weeks ago for all instruments. When we were just at home with the computer, I thought that it was very important to stay active in some way, so I was applying for competitions. Luckily that was a good [experience], but I hope that the upcoming competitions are live and not online anymore.

How have you managed your practice and motivation while at home?
Actually, that was part of the reason why I wanted to do these things. The beginning of the pandemic was pretty fine for me actually. I came back and enjoyed being with my family. I was still motivated because I was preparing for some international competitions which were supposed to be live. I had a lot to prepare, so I was motivated, but then suddenly some of them were canceled or postponed.

And that’s when I started not to feel well because I didn’t have a purpose. That’s why I started applying for competitions in order to have a goal and to achieve it.

Of course, like everyone, I faced some times of not having the motivation that I wanted to have because of the situation. Another important problem was mental health. Many people have faced that, myself too.

What are you looking forward to when we’re back on campus?
First of all, just being around, if possible, many other people. Musically speaking, I want to perform way more. I realize in the pandemic that since you are alone at this time, you have to be ingenious in some way in order to stay active, like playing online with some other people, editing a video together. That was a very important skill that I’ve improved during this time.

It will be great when I get back to LA, because I can perform with other people, play more repertoire, like things that maybe last year I was thinking, ‘Oh, I’m too busy,’ or whatever.

I really want to speak more English as well, because here I listen to a lot of English, but I don’t speak much. I think it will be great to come back to LA in many ways: to keep getting to know the city, to live with people, to play more music, to have in-person classes with my clarinet teacher and with everyone else.