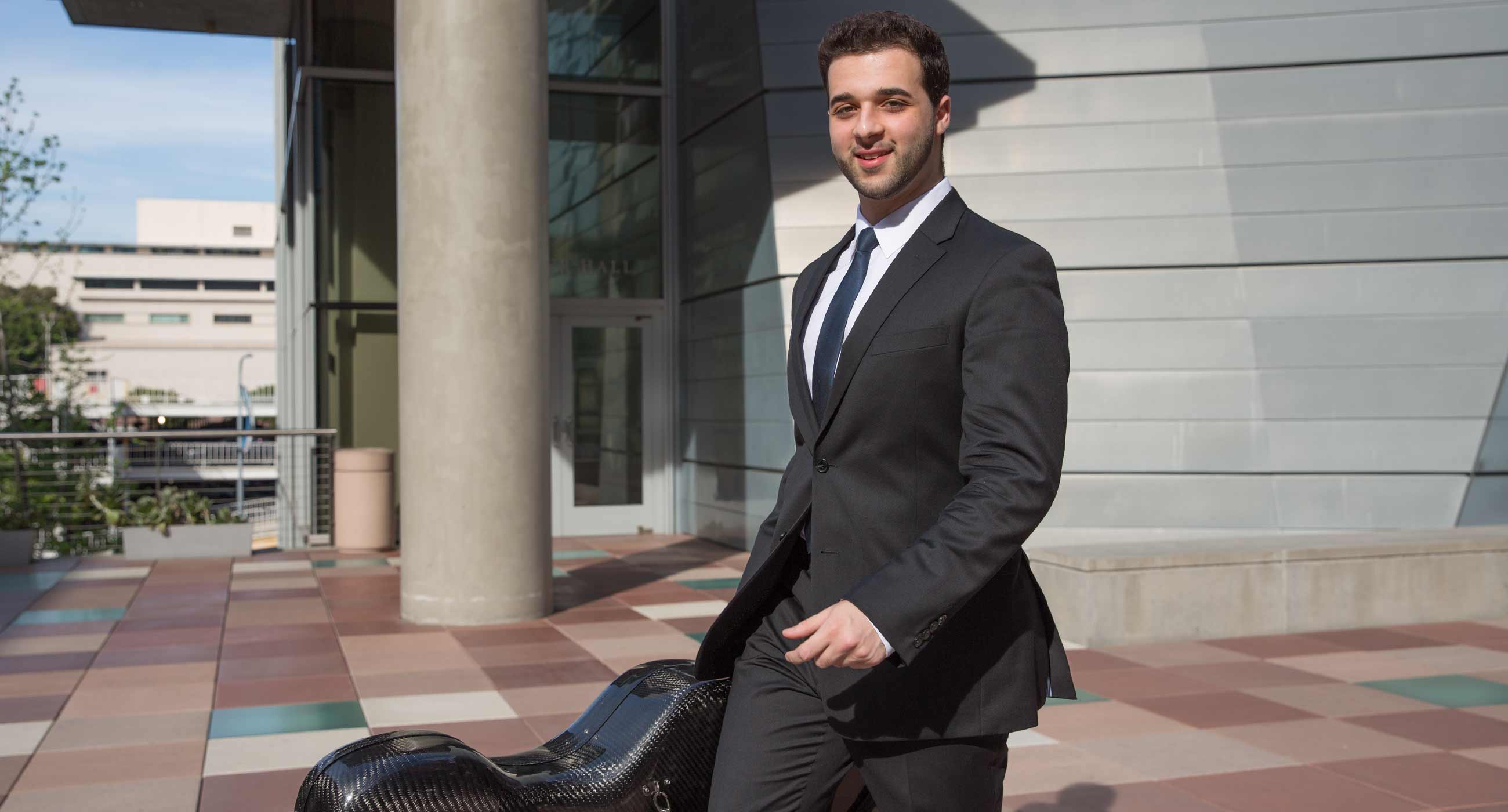 Ben Solomonow, 22, is a graduating senior in the Conservatory of Music studying with Clive Greensmith. Hailing from Evanston, IL, Ben has been playing cello since the age of five. Next year, he will continue his studies with Mr. Greensmith here at Colburn while pursuing his Masters of Music.

How did you find Colburn?
Clive actually came to [The Meadowmount School of Music in Ottawa, Canada] where I was studying with my teacher [Hans Jensen] over the summer, and Hans encouraged me to take a lesson with him. So I took a lesson, and it was really something new for me. It was an immediate hook, because he was able to demonstrate passages that were hard enough for me, and he hadn’t even played the pieces I was playing for him, so that was really impressive. Everything he said was just really innovative and something new that I hadn’t heard before. I think having a mixture of Hans and Mr. Greensmith has been really interesting.

What’s the most valuable thing you’ve learned from studying with Mr. Greensmith?
I get a different perspective from a teacher who’s a performer—someone who’s constantly performing and is on the stage all the time. That was something that was really eye opening to me, because Hans is a full-time teacher. I think just getting into a performer’s state of mind is something new for me.

What kind of mindset is that?
To take one step back from just the cello playing and to get a bigger picture of things. Maybe if you’re in an ensemble, then it’s having a more open mind about the other people there. It’s just not so cellistically focused.

Why did you choose to study here?
I remember clearly when I first came here; it was something unreal. I had never been to LA before this, so that alone was nice. I remember my friends showing me around the school. That was after I had known Clive already, so of course I really liked his teaching. I liked that the school was small, that it wasn’t too huge. It was very easy to get yourself focused on what you’re doing. I remember when I was auditioning places, as soon as I got the call about Colburn, I just canceled the rest of the auditions.

How has Colburn been?
I love it here. I really like that it’s small, because I get to see people like Mr. Greensmith, Mr. Beaver, Mr. Bidini, and all the faculty pretty much every day. And I work with them pretty much every day. I think that’s something that I thrive off of that I wouldn’t get somewhere else, where I’d just have my weekly lesson, and that’d be it for the next few days.

What has your favorite experience been from your four years here?
I liked when I played on the [Colburn Chamber Music Society] concert my sophomore year. We played the Schubert quintet with Gary Hoffman, who’s one of my idols. For a couple weeks leading up to that, I also had the opportunity to play it with Clive, which was really special for me. He was telling me how his teacher played it with him, and that was his first time with that Schubert quintet, so I felt it was kind of like passing down the torch. It was a special time to be playing it with him, and then with Gary. Having played it both of them within two weeks was just really interesting for me.

What’s your favorite kind of repertoire to play?
Anything Classical or Romantic, so anything from like the 1700s or 1800-1900s, around there. That’s primarily what we specialize in here at the school. Of course, you get some Baroque and contemporary things, but anything from that period is kind of my passion. It’s something that I definitely listen to daily.

I find it the most touching and personal kind of music. Of course I like every kind of genre in classical music, but those are the ones I grew up with since my dad used to specialize in it as well.

How do you get in touch with what the music means?
I guess that’s partly why I’ve benefited from being with Clive, because he draws on so many facets of playing and his knowledge already. From his life experience, he’s been able to decipher and understand all this music. His role I guess is to transfer that to me in our weekly lessons. Maybe it’s not something that you can put into words, it’s just something that happens gradually every lesson.

Do you prefer to play in a chamber group or in an orchestra?
Ideally I could be doing both all the time, a little bit of everything. That’s something I admire about Clive. He draws influences from his time in the orchestra and in his quartet, and he’s constantly playing solo recitals and concertos. This week we happen to be playing Mahler 1, which is one of my favorite pieces. Leading the orchestra in that is really a treat for me, and having great conductors and colleagues. I’ve also been really active with my trio recently, which is also of course a pleasure. I think just having the variety is satisfying and stimulating.

Why did you choose to continue studying here?
For my master’s, I just applied here because I really like the work I’m doing with Mr. Greensmith. I felt like there was more to do, and these two years will give me the time to accomplish what I want to do with him. Something that’s really great about him is that I feel like he has his own agenda for each student that he wants to cover with them. I’ve definitely felt an improvement, and to continue with someone you know for a few more years is really beneficial, because no one knows my playing as well as he does at this point.

What’s your end goal?
Ideally, I would have something stable going on, whether it’s an orchestra job or some kind of teaching job. But again, going back to variety, I want to be in a position where I’m doing a little chamber music, orchestra, solo, and everything. I’ll be aiming for anything that gives me that variety. For those kinds of things, I think you have to take it as it comes. You can’t really plan it as much as you would hope.