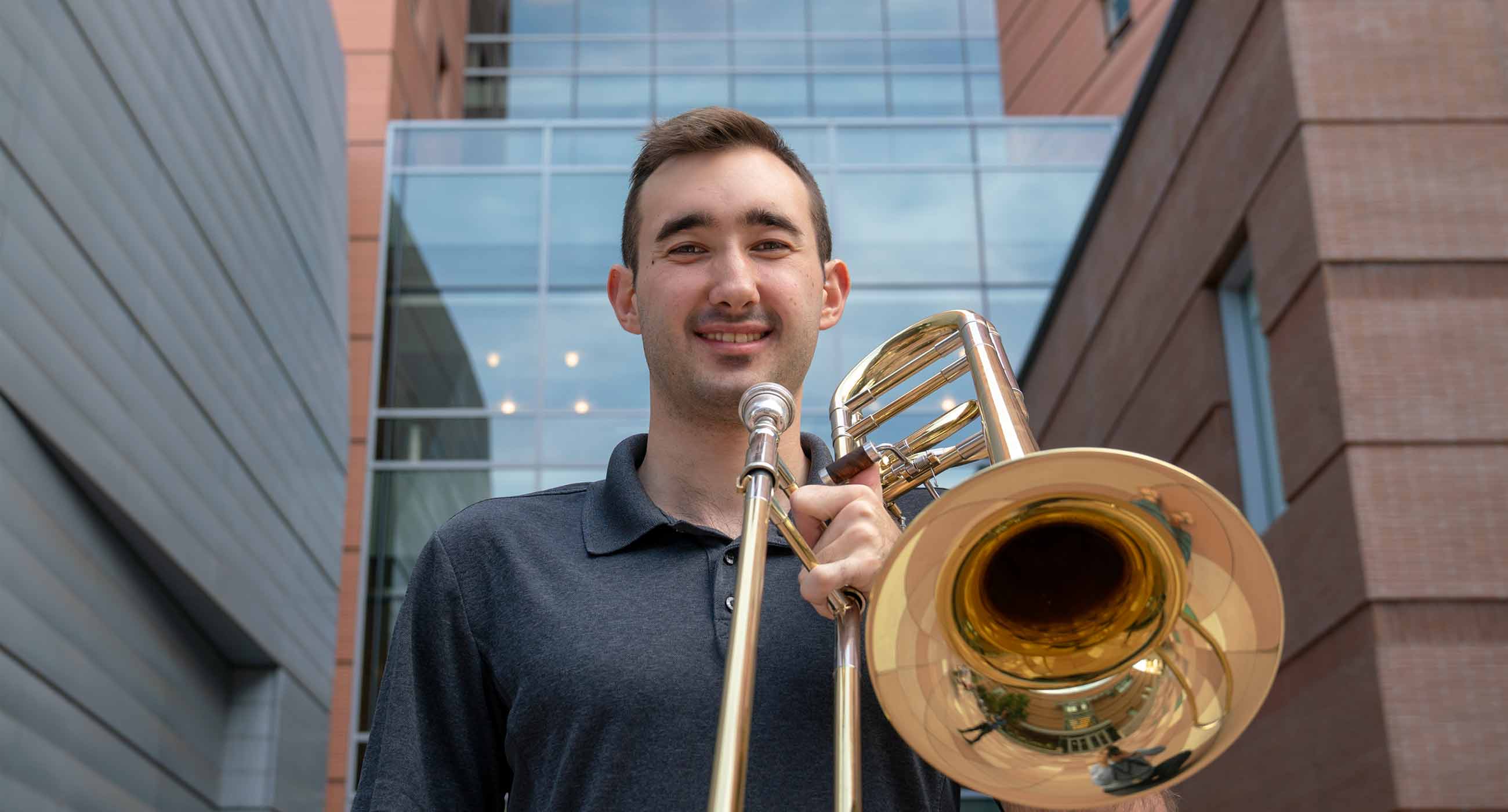 Connor Rowe, 21, studies trombone with Mark Lawrence. He is from Lompoc, California. This is his third year in the Bachelor of Music program in the Conservatory.

Why did you decide to study at Colburn?
I learned about Colburn from some guys at Music Academy of the West. It became this unattainable dream of mine. It was like, well it’s this free school, super selective, tiny, lots of performing opportunities, lots of individual attention, and it’s just a beautiful place. All through high school, I did not think I was going to get in. Then I auditioned here and it went really well, and I got in. It was just like, what? Because it was sort of a dream.

Career-wise and financial security-wise, it was a really good decision. It’s a really nice environment. Like sitting outside here, it’s just so relaxing. It feels like a dentist’s office kind of. But like in a good way, you know?

No, I don’t know.
You don’t like the dentist? It’s clean, and everybody’s just kind of doing their thing.

What are some things you’ve been involved with here?
We did a side-by-side concert with the LA Phil. I’ve played in the baroque ensemble and the contemporary ensemble. Those are always fun and challenging to do.

What’s the value of doing those kinds of things in addition to your standard orchestra repertoire?
I like to just do things that are new, things that maybe make me a little bit uncomfortable because it’ll help me grow more. While it is fun to play Dvořák 9, it’s always going to be Dvořák 9, and contemporary music is always so unpredictable. Listening to it is really challenging. You never really know what to expect, which is why I like it so much.

What has your most memorable experience here been?
When I played in [Performance] Forum last year, that was definitely one of my favorite performances. Playing in Forum is just so encouraging. Everybody’s there to support you and everyone’s very positive. I just felt very safe when I walked out on stage, like this is going to be okay. I’m around people who all want me to do my best, they’re all rooting for me. I felt like I really connected with music that day, and it felt very spontaneous.

How was the LA Phil brass side-by-side rehearsal this week?
Man, playing with LA Phil every time, it’s just like a light bulb turns on, everything sort of clicks. You see people who know exactly what they want, and they know how to get it. You stop overthinking things and just try to do what they do. It reminds me of why I want to be doing this kind of thing.

When they play, there’s a very secure feeling. They’re not afraid of it not going well. It’s just like, here’s the music and I’m just going to breathe and it comes out. It’s very intangible, in a way. Like even describing it to somebody, you can’t quite get it. It’s when you sit next to them, you feel how easy it is for them to just play incredibly loud with a beautiful sound with no effort.

After sitting there for two hours, I felt like my playing just went up a hundred percent, just trying to convey that sense of playing like it’s easy. Because at the end of the day, it’s really simple what you’re doing. You’re just buzzing into a piece of metal. With all the moving parts, you can make it more complicated for yourself, but for them it’s simple.

So it’s a reminder every semester, every year, that you can achieve this. If you’re doing it right, it’s not difficult—in a way. To get there is difficult, but once you’re there, you can trust that you’re there.

Would you say that your mindset is a big part of how you play the trombone?
Yeah, the famous saying is that brass playing is like 90% mental, 9% air, and 1% everything else. Eliminating doubt is a very important aspect of performing. Even when I’m playing and it’s a part that I know, I’m way more likely to mess up if I think about making that mistake. I try not to focus on anything that I’m physically doing. I try to just hear the music in my head as it comes out.

What do you hope to do in the future?
I’m not quite sure, I think. It’s funny, like a lot of people come to school to refine what they’re doing. But after coming here, I’ve sort of opened my eyes to like there’s a lot of different things you can do with the trombone.

Well, I would really like to play in a big orchestra, but I definitely think I could get fulfillment from many other things. I’d love to be in a regular chamber music group. Definitely writing more music in the future, certainly advance the trombone in the eyes of the classical music world. I think we’re still lacking in repertoire. I love to make some contributions to that. And I would really like to keep playing contemporary music and stuff that challenges people, challenges me.

What are your interests outside music?
I love history, I love reading about history. And marine biology, which is really something I try to keep in my purview.

How do you find the time to dedicate to those topics?
You kind of have to just do it when you can. One of the things I’ve noticed is that being a musician is sort of like being in war. There are these short periods where you just have a ton of stuff going on. All the auditions are in a month and you have concerts, recitals, and everything is going on. You have no free time. Then all of a sudden, you have like two months where you have literally nothing. And it never seems to balance out. But that’s part of the excitement also. Yeah, it’s kind of like a roller coaster.