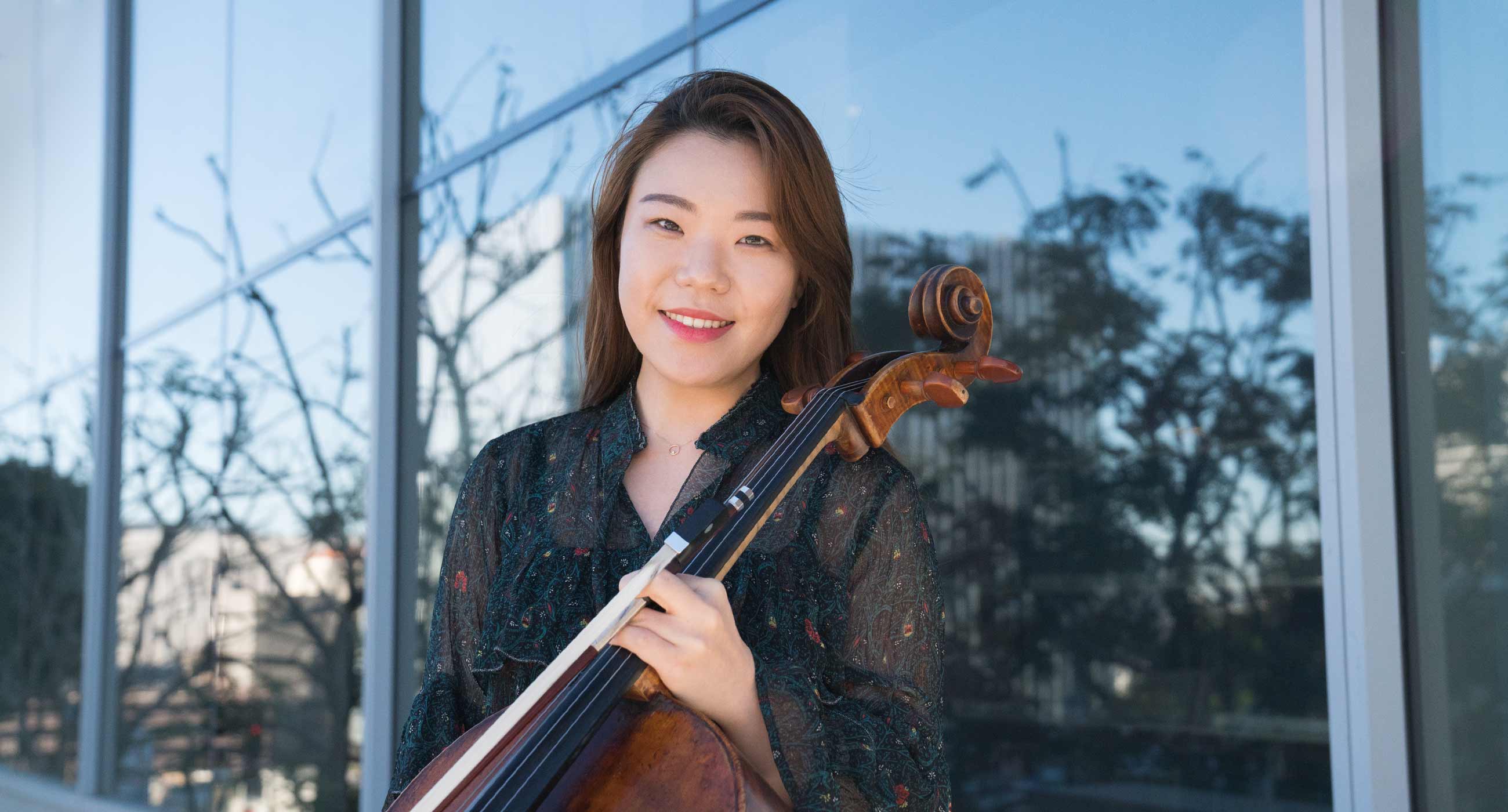 What brought you to Colburn?
I did my undergrad in Korea and my former teacher in Korea is good friends with Mr. Greensmith, so he introduced him to me. I really wanted to study with him then, but something brought me to Paris instead, and I spent three years there doing my master’s. My teacher in Paris got a job in New York and I followed him, so that’s how I ended up moving to the States.

What is it about him that drew you to him?
His playing is still my favorite playing in the world, for a cellist. He still inspires me the most in my lessons and he has so much knowledge that I felt like I was missing in my playing. I was so used to playing and being a musician, since I had been playing the cello for 15 years at that point. I wasn’t really motivated, but he totally changed my musical life. I didn’t think it would be easy to meet someone motivates you that much when you’re already old for a student. He totally refreshed me, and I’ve developed many good aspects of my playing that I’m still applying.

You’re performing in the Musical Encounter Interactive drama production this week for hundreds of elementary school students. What has that been like?
This is my very first acting experience ever, including in Korean. It’s been a huge challenge for me and I appreciate that they gave me the chance. They actually trust me and encourage me. It’s an unforgettable experience.

What made you decide to do it?
I’m still not sure whether I’ll graduate this year, but I wanted to do something memorable at Colburn before I leave. Honestly, I just wanted to improve my English and I thought it would be an interesting way to do that. I had to look at my script all day and memorize all the lines, acting, and gestures.

It was really, really stressful in the beginning, but now I feel like I actually enjoy being onstage. It was interesting to see the process behind creating theatre too. I met the costume designer and the lighting designer—musicians never have the chance to meet people like that. So I’m learning a lot and have also developed an interest in theatre and drama. It’s so much fun.

How has your Colburn experience overall been?
It’s been great. The thing that I appreciate most about Colburn is that they support me not only as a student of Colburn, but also as a musician. They appreciate whatever I do outside of Colburn, and they are proud of me. That surprised me in my first year. They never doubt me.

Also, the facilities are great, and 24 hour practice rooms are amazing. We live here, so you can practice whenever you want. Housing is free and that’s a huge thing, actually. It’s not only convenient, but you don’t have to care about other things, only practicing. That’s exactly what you need when you’re still young and when you’re still studying. That’s great.

Everything’s so fast at Colburn, including very small things like documents being processed. It’s so fast and organized. I feel so safe as a foreigner in the States, at a foreign school. They teach us how to have a good quality of life here.

And the orchestras. We have such good conductors and programs. We only have one orchestra and we all know each other. We don’t play with different people for each concert, so we can actually develop our own sound as one orchestra. In other schools I’ve gone to, there are three or four orchestras, and you didn’t know which one you will be in, so you don’t know your stand partner or the other people in your section. But we do, and I can see that at the end of the year, the orchestra actually gets a lot better and all the sections fit together so well. That feels really good.

How did you start playing the cello?
I grew up in Korea. They have a very intense educational society and my mom wanted me to play at least one instrument. All the kids around me played piano, but my mom didn’t want to make me sit at a huge instrument, so she thought violin would be great. So I actually first started in violin at a private music academy. There was a cello teacher there and she saw my hands while I was playing violin. I have pretty thick and strong hands for a girl, so she told my mom and my teacher, ‘She has a cellist’s hands.’

I was six and a half, and it had already been three years since I started playing violin, but I really liked cello because it was just bigger than the violin. So okay, why not? I was used to playing string instruments, so I was able to advance very quickly. I turned out to be talented at cello, so by the second year I was like, ‘Oh, I’ll be a cello teacher. I’ll teach cello, only cello.’ In elementary school, whenever we did activities that asked what you wanted to be and what your dream job was, I always wrote down cello, only cellist, cellist, cellist. That’s how I started.

What it is about the cello that you really like?
Apparently, the cello sound is closest to the human voice of all instruments, so it’s very musical. That’s why I like cello better than violin, it’s low and has slower, deeper sound. I’m still obsessed with it.

Why do you love music in general?
Because of my status right now—my age, my status here as a foreign student—my goal is to be in a great professional orchestra. There are two main ways to have a stable career as a musician: teaching at a school or playing in an orchestra. But looking around at other salarymen outside of the arts, it’s easy to see that they get very stressed about their jobs, but they still have to fit in the mold of society and socialize with those people even if they aren’t friends. They’re almost forced to be those kinds of salarymen in order to make a living.

As a musician, as long as you keep loving music and you have a stable career as a professional musician, you get to do what you like, and it’s a great life in general. So, I like music and I want to keep doing music, but I also want to have a stable life. Being a musician brings those two things I want for my life together; I think it’s just perfect. Some people get stressed about their music and their jobs but I still haven’t felt that. I think I’ll just continue to like it. And I’m proud of it—that I haven’t given up yet, and that they call me a musician. When I say I’m a musician and a cellist, people say, ‘Oh, you’re so lucky because you do what you like.’ I love to hear that.