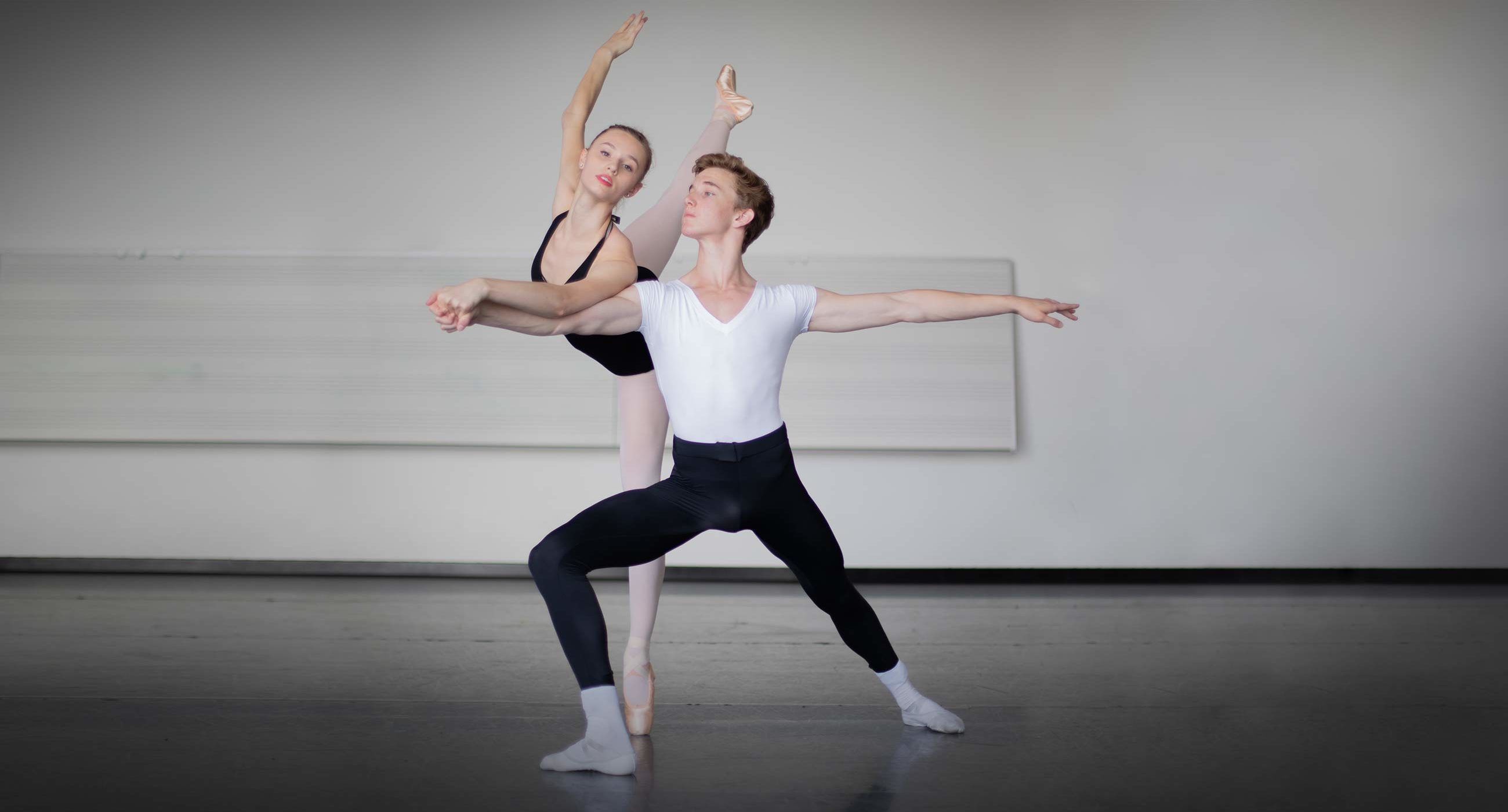 How long have you been working on these roles, and how did you get chosen to perform on Pinnacle?
HP: Well, we partner a lot in pas de deux class, and I guess they just thought we should do it.

AI: We learned it over a month ago in pas de deux  [class], and then it’s been two weeks—

HP: It’s been two or three weeks since we’ve been working on it for Pinnacle.

What is the dance like?
HP: It’s a romantic wedding pas de deux, very slow, and with a lot of acting and emotion.

How do you get in touch with the acting part?
HP: Well, we’re dating so I guess that makes it easier to get into the emotion.

Why do you think people should come see it?
HP: It’s a classic, it’s dramatic, it’s very creative and epic.

AI: It’s very pretty, and it goes through a lot of emotions. The pas is soft and romantic and each of us has solos. His is kind of upbeat and has impressive tours [turns] and stuff, and mine is a little bit sassy but at the same time, regal. And then the coda is very exciting. It’s very different from the rest of the show.

HP: It’s been an interesting process because it’s very emotional and everything has to be very happy and smooth but also there’s a lot of technically difficult steps in it as well, but you have to keep yourself very composed and relaxed. There’s a lot of parts where we pause and there’s a lot of acting, where we’re supposed to be in love and all that kind of stuff.

AI: When we first learned it, we did everything the most basic way you can do it, and as we learned it in rehearsal we started adding in, like, things with one hand.

HP: We’ve gotten more comfortable with stepping it up and doing more difficult things, so it’s been growing.

How is a pas de deux different from doing a solo or performing in a corps?
HP: When you’re a solo, you’re dancing on stage by yourself so it’s kind of all you, but when you’re doing a pas de deux and you’re partnering with a girl it’s usually about both of you, or just the girl, and you really have to share everything. It’s about working together, kind of like in the corps. You have to figure stuff out and work together. You’re a team.

AI: In the corps de ballet, it’s different because you have to watch your lines, make sure your heads are all the right way, stuff like that. With pas de deux, you can make your own artistic decisions but you have to work together to make it work.

How did you choose the Dance Academy?
AI: I went to Colburn when I was eight because I played violin. Then I moved away and stopped going, but we still got their brochures. So my mom just got one of their brochures and she said, oh hey there’s an audition for it, you should go. So I went, and originally I was on the waitlist and at the end of the summer I got in. I decided it would just be a much better option than my other studio. There’s amazing teachers and training here, and a good environment.

HP: I found it through some people at the summer course at SAB [School of American Ballet]. I needed to go to a new studio because my old studio didn’t provide classes every day or a very good schedule like they provide here, and with very nice faculty and everything. I basically just looked around and found it online, but I actually kind of knew who Jenifer Ringer and James Fayette were through Jenifer’s book. So when I found Colburn and I looked at the faculty and saw it was them, I was like oh this is cool. So I did the boys’ audition.

How long have you been dancing?
AI: I started taking lessons when I was two, and then when I was seven, that’s kind of when I made it the main thing that I do. Ballet’s been my main activity since I was seven.

HP: I started when I was around four or five, and I only really decided that I wanted it to be my profession probably last year, or a year and a half ago when I actually started taking it seriously. But it was hard because I lived in a small mountain town and there wasn’t a lot of ballet, so that’s why it’s great that I can live here and train all day.

What’s your ultimate goal as a dancer?
AI: Obviously to get into a company and hopefully be a principal, but I love dancing so I feel like if it was a job that I had it would be fulfilling. Hopefully I wouldn’t feel like I’m working.

HP: I think being principal dancer at a major ballet company would be cool, but I just want to enjoy my dancing in the future and do what I like to do, no matter where I end up.

How do you think you can get more people to watch dance?
HP: I think social media actually helps a lot. I’m not a huge social media person but I think that most people are. Dance is becoming very popular on social media and I think that helps put it into the mainstream a lot. I also think new works of ballet will help.

What are your interests outside of dance?
HP: I like working out. It sounds weird because it’s also physical, but lifting weights is simple. It’s not like ballet where there’s a million things you have to worry about. So doing something hard, but simple, calms your mind.