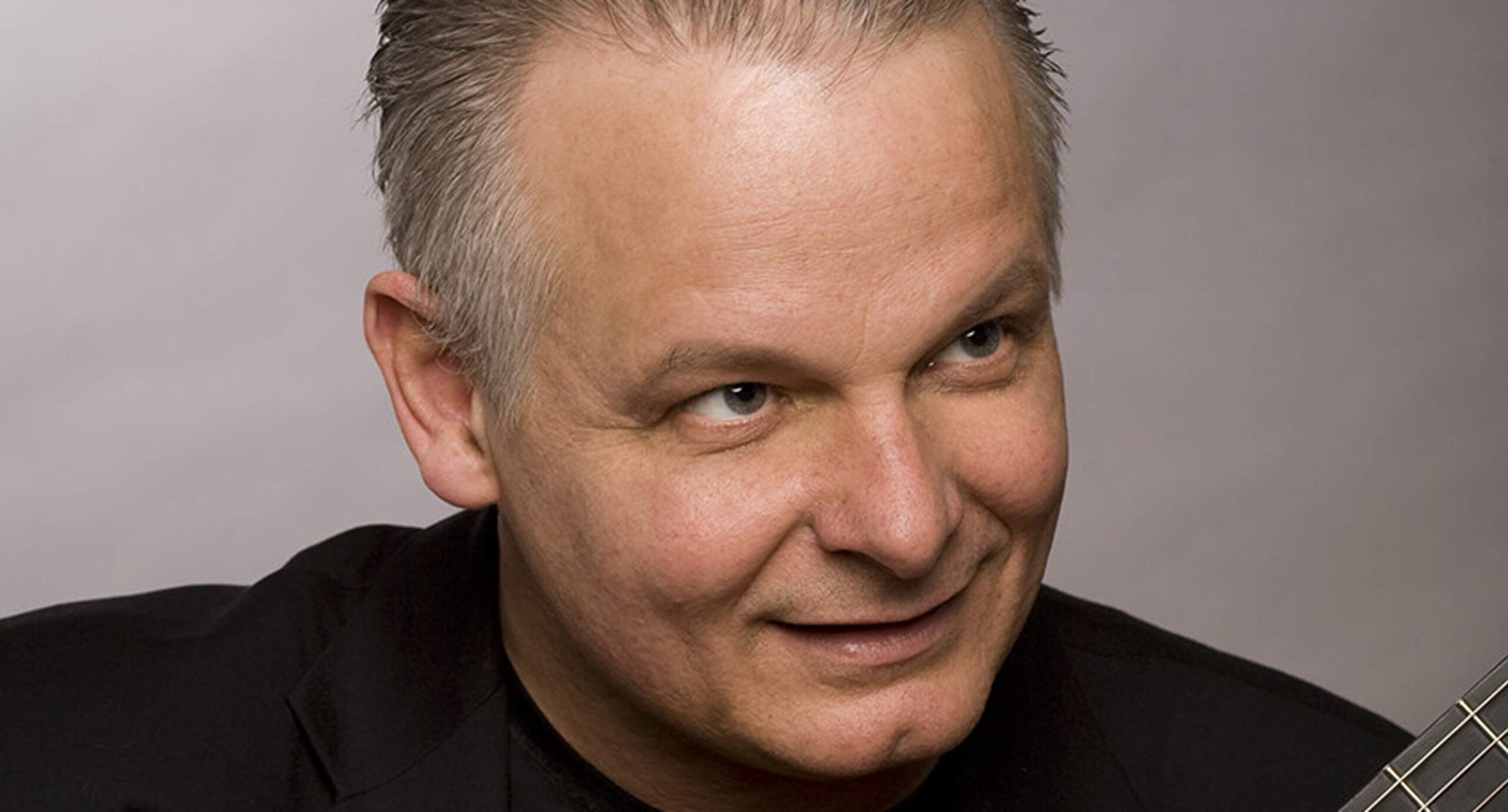 Guitar faculty Kenton Youngstrom has been teaching at the Community School for over four decades.

A guitar faculty member at the Community School of Performing Arts for over four decades, Kenton Youngstrom shares both the musical journey that led him to Colburn and his dedication to developing and empowering students on their own artistic paths.

Kenton first trained with a teacher at the age of nine after asking his parents for music lessons. Since his parents required him to raise half of the funds for his $36 guitar, he washed many cars and cleaned many yards to save up. Upon starting lessons, his training was all notation within the tablature system, but with a focus on chord diagrams and one diagram per note. He found it to be a strange way of teaching in hindsight. The fact that his teacher never played for him left him not knowing exactly how something was supposed to sound, and this omission greatly influenced how he would later teach. Playing for his students is a key part of his training method so that they can hear how a note or piece of music should sound to replicate it or improvise from it.

So unfortunately, his lessons left him uninspired; he just wasn’t “energized by” them to continue. Then a vinyl record with a piece called “Classical Gas” by Mason Williams entered his life, and he was determined to figure out the notes by ear to replicate this classical guitar music. No one had ever mentioned learning by ear to him: “I never saw anybody do that. There was no model about that.” So in exploring new territory, he embraced the challenge and met success! “Miracle of miracles, the first sound of the piece was an open string on the guitar, and my guitar happened to be in tune. And playing that note to see if it was the right one… It was like the choir singing ‘Aaaaaaaah!’ A miracle that I could actually hear that it was the same. And I was, from that point on and still today, just absolutely hooked on the idea of learning things by ear.”
This newfound skill led Kenton to raiding his brother’s record collection and propelling him into the genre of American blues music. Listening to artists like BB King and Muddy Waters, he built up his confidence for learning by ear and expanded his repertoire. A few years later, he received an electric guitar for Christmas purchased at the neighborhood supermarket. “It was the best thing in the world for me at that point because I could get closer to the sound that I was hearing on some of those blues recordings, because they generally used electric guitars.” Plugging in his guitar to the back of a stereo through a microphone input, he could hear himself “a little louder than normal.” And as it goes, Kenton Youngstrom’s life altered forever. “I was on my way; I just could not be stopped.”

The young Kenton entered a “really exciting period of growth” exploring the blues in a group setting with musicians from his neighborhood, and of course, rock and roll made its appearance about this time too. One of the musicians who played bass took a pivotal role in the future of Kenton’s musical journey with a simple suggestion, “You should think about doing classical guitar.” Now 13, Kenton felt a little self-conscious when he heard classical music on the radio and “felt really inadequate” because it was beyond his knowledge. He didn’t know Beethoven from Bach, and that bothered him. “I really didn’t like that feeling. I wanted to be able to know.” And so, the determined 13-year-old became a connoisseur of classical music, listening to it all the time.

Supporting her son in his growing musicianship, Kenton’s mother called USC with a clear demand, “I want my son to study with Christopher Parkening.” She was determined to have her son learn from one of the most famous American classical guitarists. The voice on the other end asked her son’s age, which was 14, and suggested he train with a graduate student. This graduate student, James Smith, did eventually become a teacher at USC. Benefiting from Mr. Smith’s solid technique and music theory training, Kenton also expanded his playing through jazz and the requisite demand of improvisation. Mr. Smith further challenged Kenton through assigning music transcription exercises, which Kenton found fascinating. “I was becoming sort of like a guitar scientist in a way.”

A young man of 18, Kenton auditioned for the USC Classical Guitar Department and received a full scholarship. During this time, he received studio guitar training where the key skills of sight-reading and improvisation led to success. He participated in a class taught by Lee Ritenour, who is still an active jazz and rock guitarist. Kenton’s skill level increased dramatically during this time under the professional tutelage of Ritenour. A few years later, Kenton wrote his first theme for a TV show soundtrack. A family friend, famous television director Jesús Treviño, asked Kenton to compose the theme for a program called “El Espejo” (The Mirror), a show on KLCS, an educational channel. Around this time, another family friend had a Mexican folk dance ensemble called Ballet Folklorico Mexicapan, and they needed a guitarist. This provided an opportunity for Kenton to transcribe music and learn the vihuela, a five-string instrument like a ukulele with a real big back like a guitarrón. He enjoyed this opportunity to “branch out into a very rich and wonderful genre of music,” and also incorporate vocals that stretched his range and aided his Spanish pronunciation. A memorable moment, this ensemble performed in the 1981 Tournament of Roses Parade, almost 40 years ago. The float won the Pioneer’s Trophy for the City of Alhambra, which best expresses the romance of California.

In a fortunate position where a variety of opportunities presented themselves, often “tugging in different directions,” Kenton leaned on his experience and desire to enrich others, which led him to the USC Community School (today’s Community School of Performing Arts) in 1979. Recognizing that people learn in different ways, he has approached teaching from a flexible position that allows the student to develop on his or her own terms. “Some people learn better by ear. Some people like to see things written….It’s nice to support multiple ways of learning the same thing.” Still a motivation today, Kenton found that his “whole goal for students is to light a fire. If they don’t have a fire already lit, I want to help them to get that fire lit.” And it doesn’t matter what music genre they are interested—Kenton supports an “open door policy regarding repertoire.”

Kenton seeks to provide every student with “a solid foundation that has no deficiencies” even when some students have different motivations. Harkening back to his own music education and the areas that he felt were deficient, he built a strategy encompassing the basics to set up students for success on multiple repertoire paths. Adhering to his philosophy, “follow the steps of slow, perfect practice,” he requires students to learn the guitar basics of strumming chords, finger-picking (arpeggiation), and single line. These three ways “are very critical to each of the different genres.” He found that since he started out learning the more complicated things, he “missed out on a whole range of beautiful songs, like Beatles songs that would be strummed….I wasn’t that guy who could entertain at a campfire gathering….And so that’s my big triumvirate of technique that I have everybody learn. I don’t want them to feel like, ‘Wow, I really missed out on strumming chords, or [other technique]’.” Kenton developed, and continues to update, his own method book, and he supports a holistic approach to guitar playing. His “hope is that [students] will find something that they just get so excited about [and] take off in that direction.” If they’ve learned the three techniques, then he’s comforted in knowing “they have a foundation in the other styles in case they want to do those too.”

In addition to supporting students in discovering what excites them musically, empowering them creatively is a huge aspect of Kenton’s teaching practice. Kenton conveys to his students that “they are capable of doing things like being a composer, [writing] music for yourself or other people, [learning] the skill it takes to put pencil to paper nowadays, to use a notation software. And you really hope that they will excel at that because that’s so empowering, to be able to write your own music and actually release it in a form that people can buy.”

As Kenton reflects on his 40-plus years of teaching at the Community School, he shares his thoughts on the importance of performing arts education. “I personally feel that it’s a joy, and to have anything in your life that’s a joy is worth the effort it takes to get there.”