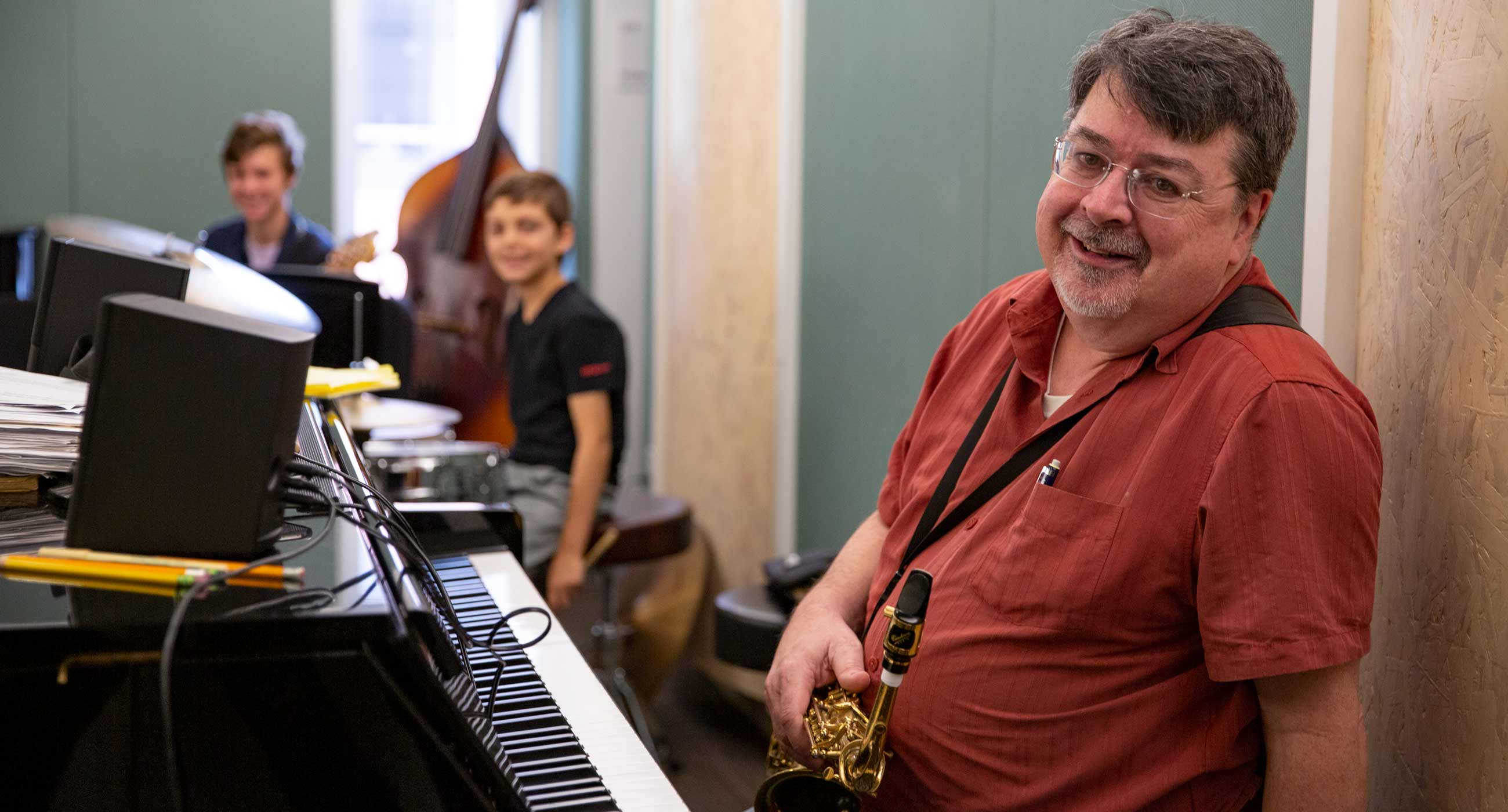 Colburn Jazz Workshop chair and saxophone faculty Lee Secard has built the jazz program from the ground up. He is originally from Orange County, California.

This interview has been lightly edited for length, clarity, and style.

How did you come to teach here?
I taught for a couple of years when I was just out of college, and then I started touring. I went on the road, and I did that for about eleven years.

So, when that ended, there happened to be an opening for a saxophone teacher. So I applied and auditioned, and I was fortunate to get that position. And so that’s how I started; I started with one student.

I had an idea about what the school could be, and my timing was impeccable because those years were when Joe Thayer [former Executive Director and Dean Emeritus] and Toby Mayman [Founding Executive Director] had the idea to [build the school into what it is today.] I was very fortunate in that the deans that I worked with, Joe Thayer, and then Bob McAllister, were really supportive of our ideas.

What was your plan for the school?
I had the idea that we could be a center for jazz education in Los Angeles. So, starting with one class and four students at the old school on Figueroa, my thought was that we needed to diversify and add classes. I tried to proceed with a plan and some basic values.

The basic values of the jazz program, as I saw it, were the encouragement of original music, composing, an emphasis on aural hearing, aural skills, and aural acquisition of the music. This is a heard art form, and it’s imagined through rhythm and creativity that happens in real time.

What has it been like teaching here?
The first thing about my experience here is that I am always stunned and inspired by the talent of our students. I’m very, very fortunate. I can’t imagine a teacher more fortunate than me in terms of who I get to work with. So, I’m very aware of that.

How did you get into jazz?
By the time I noticed it, I was already in it. My memories from very early in life are of wanting to be a musician. It was a difficult process to make it happen, I have a bit of an unusual early history. But, I think like most musicians, it’s what I always wanted.

In those days, Columbia Records was selling duplicate quarter-inch masters of recording sessions, so these things had an unbelievable sound coming off the tape; it was one generation removed from a master recording. I heard Paul Desmond’s E-natural on his alto, basically the way he sounded in the studio, and that changed everything. I had that sound in my ear from when I was nine years old. From that point forward, I didn’t really ever consider anything else.

What was your journey like from finishing school to building a career?
When I was in school, I wanted to play. I had the idea that I wanted to be a performer. It was a struggle, of course, but I was fortunate when I was out of school for about a year to start playing with a really great jazz big band, the Bill Watrous Big Band, that has become significant by virtue of who came out of it. I did that for three years, and then I started touring.

So at the time that I started teaching here, I studied composition as a graduate student. I had some wonderful teachers doing that. My composition teachers were Stephen Hartke and Don Crockett. Along the way earlier, I had some amazing teachers. I was able to study with Warne Marsh and Charlie Shoemake who were both master jazz teachers. At a certain point around 2000, I became part of the Luckman Jazz Orchestra and I wrote a lot of music for them, every concert for five years.

My goal was to be musical. I always had an ambition to be improvising, to be playing at a high level, and to be the fellow that showed up with all of the music under his arm that everybody was going to play. That was my wish. So, as a teacher, that’s the type of experience I want to create for my students.

How has that manifested with the jazz program here?
Fast forward through the years, we have wound up with eight bands. We have a Big Band, we have seven combos that serve different levels of development among our students, and to some degree they serve different ages. Over the last few years, we’ve gotten a lot of honors and awards.

I’ve been fortunate to be in a position to assemble a really fine faculty. We just hired a bass teacher, Katie Thiroux, who was our student here. We have two wonderful jazz drum teachers, Jerry Kalaf, who has been here as long as I have, and Ken McGrath. My assistant is Dr. Walter Simonsen, who is our jazz trumpet teacher and the Assistant Director of the Big Band. He’s a phenomenal teacher. Walter and I are both involved informally in advising students in composition and arranging. Our jazz piano teacher is Liz Kinnon, who also directs the adult ensembles.

Your students participate in the Monterey Next Generation Jazz Festival and the DownBeat awards every year. And this year, 11 of the 17 Music Center Spotlight Award jazz instrumental semifinalists are Colburn Jazz Workshop students.
Those are big efforts every year. We’ve been to Monterey for five years in a row with three bands. I don’t think that’s ever been done up there before, because it’s an invitational festival. Last year, our Thursday Night Band won Monterey Next Gen, and they played at Monterey Jazz Festival last fall.

Over the past however many years, we’ve won about 50 DownBeat awards, and that’s also a pretty phenomenal result. And this year, Dario Bizio, jazz bassist and composer, is one of two Spotlight Award finalists performing on the final concert at Disney Hall in June.

What’s the importance of having them participate in these festivals and competitions every year?
The culture needs to go on. This is our music. This is American culture, this is American music. It’s the best of what our culture is about. It’s not inherited from anywhere else, it happened here. So it absolutely needs to go on. We feel pride and ownership, and want to sustain it and make it grow.

How do you think the world of music has changed for students today?
It changes every five years completely. I recall something that Glenn Frey said, of the Eagles. He said, a few years ago, “I don’t even know what a record is, I don’t know what a hit record is anymore.”

Now it’s at the point where artists emerge from YouTube. They all know each all over the country because everybody posts their audition videos from everywhere.

When I started paying attention to music, there was still a pretty thriving club scene, people would tour, you’d have long tours of guys, different people would be on the road a lot. Now when people go out and tour, it’s for a few days here and there. A lot of our students still want to move to New York, now a lot of New York guys are moving here.

Music always changes. By the time our best students are in the 11th grade, they have the finger completely on that pulse, and they know exactly where it’s going.