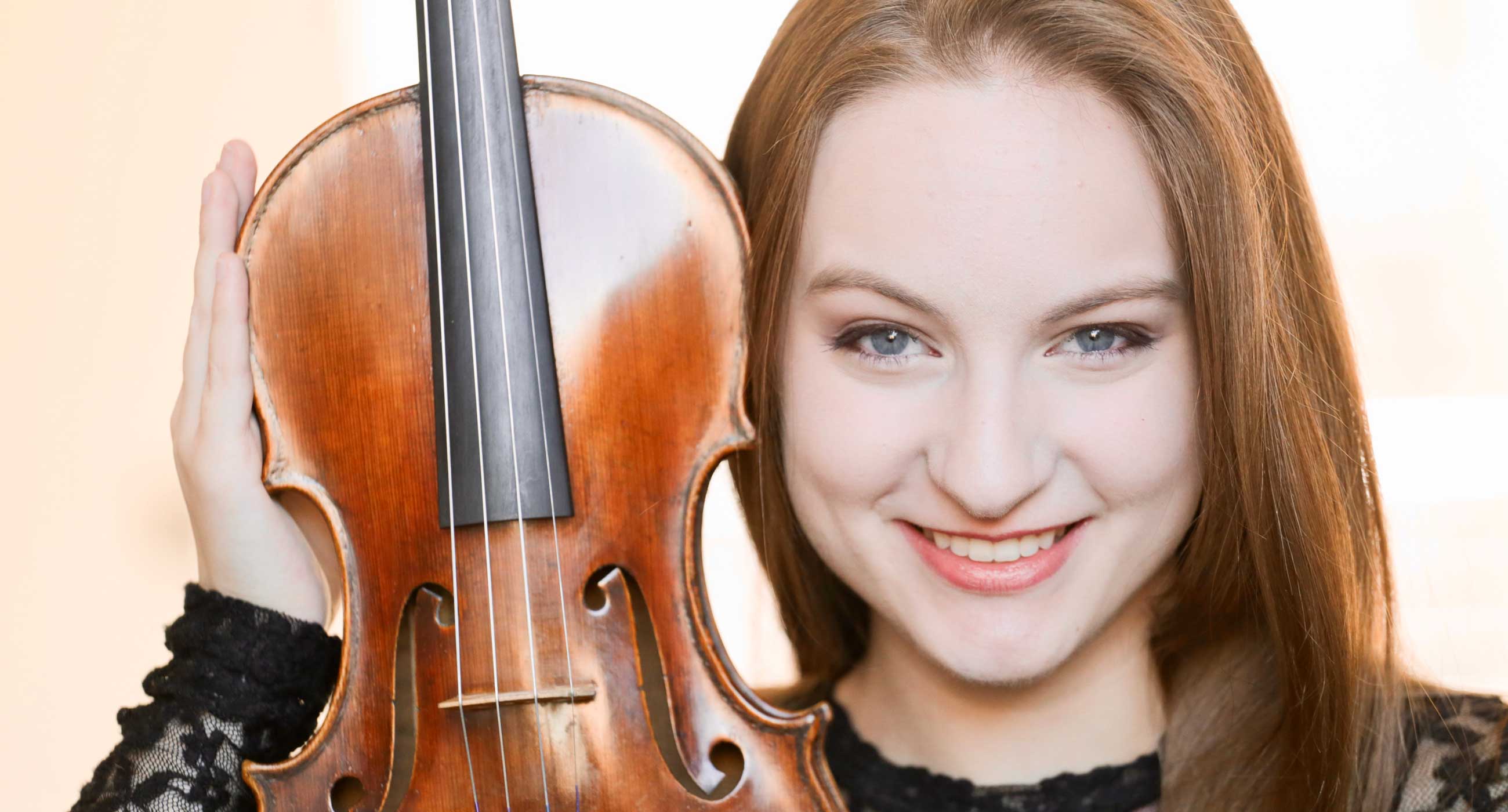 Felicity James will perform the Glazunov Violin Concerto with the Colburn Orchestra on December 9 before starting her new position as Associate Concertmaster of the Minnesota Orchestra.

Few professional moments are as important to young musicians as performing a concerto with orchestra, presenting a solo recital, and eventually winning a coveted seat in a major orchestra. For Felicity James, it’s all happening in a whirlwind of milestones, as she performs a solo recital, appears with the Colburn Orchestra, then moves across the country to start her new position as Associate Concertmaster of the Minnesota Orchestra—all in just two weeks’ time.

If she’s at all overwhelmed, it doesn’t show. “It’s definitely the best possible way to finish my time here at Colburn,” she said. Her two big performances do aptly commemorate the four-and-a-half years she spent in the Conservatory, as she takes the stage with colleagues, mentors, and friends.

Her recital program includes the Ravel Duo with cello professor Clive Greensmith, who she says has been one of her “biggest inspirations.” She also says she’s looking forward to performing a variety of repertoire she’s been working on with her teacher Robert Lipsett.

Then, on December 9 at The Soraya in Northridge, she takes the stage with the Colburn Orchestra and Music Director Yehuda Gilad for a performance of the lesser-known Glazunov Violin Concerto. “It will be wonderful to share the work with people who probably don’t hear it very often,” Felicity said of the upcoming performance.

Felicity spent a lot of time studying the concerto, practicing to master the difficult fast passages and intricate cadenza, but also took some time away from it. “It’s easier to come back to a piece you’ve already learned rather than starting it fresh and performing it immediately,” she said. The Colburn Orchestra appearance will be her third performance of the work after reintroducing it into her repertoire, following two concerts with orchestras in the Pacific Northwest.

Shortly after her finals bows at Colburn, she’s off to the Midwest to serve as the Minnesota Orchestra’s new Associate Concertmaster under Maestro Osmo Vänskä. As deputy to the concertmaster in a highly renowned orchestra, hers is a spot many violinists would be overjoyed to fill. “They were all so supportive and they sound incredible,” Felicity said of her future colleagues. “I’m thrilled and honored to join them.” The appointment was announced just earlier this month, following an audition and trial weeks during which she played with the orchestra. She starts rehearsals in mid-December, just days after her final Colburn appearance.

When looking back at her time on Grand Avenue, Felicity values the opportunities to get on stage and practice her craft. “I love performing, and one thing that Colburn does really well is providing performance opportunities,” she said. “There’s so much you can achieve in the practice room, but having the chance to try things out on stage is really valuable.”

Finally, Felicity says she’s been very grateful for the Colburn community. “I consider myself lucky to be at a school where all of my friends and colleagues play at such a high level. It’s been very inspiring to learn alongside them.”

Get your tickets to Felicity’s final Colburn Orchestra concert on December 9 at The Soraya in Northridge.