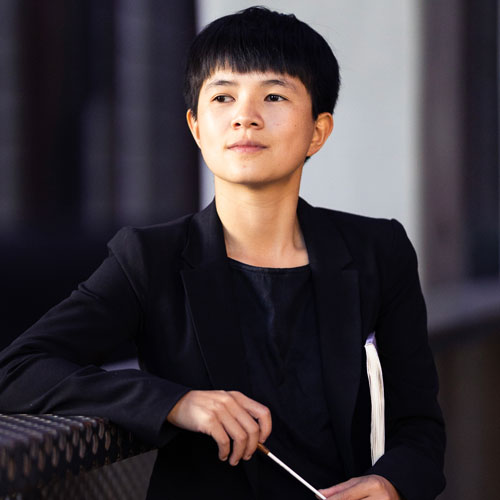 Molly Turner conducts and composes music. Recently, she has conducted the Juilliard Orchestra, the Dallas Opera Orchestra, the Primrose International Viola Competition, the Colburn Orchestra, Rice’s Campanile Orchestra, and the Eastern Festival Orchestra. Ms. Turner also filled in on short notice for a full video production of Teddy Abrams’ new telling of Stravinsky’s A Soldier’s Tale created by Nate Farrington and Catherine Garcia and prepared the Colburn Chamber Orchestra for James Conlon in the LA Opera premiere of Carla Lucero’s The Three Women of Jerusalem. In 2019, she was the youngest conductor invited for residency at the Dallas Opera’s Hart Institute for Women Conductors. She has served as a cover conductor for the Philharmonie de Paris, San Diego Symphony, San Francisco Symphony, Juilliard Orchestra, and Colburn Orchestra. She also regularly prepares the Juilliard Orchestra and has assisted Esa-Pekka Salonen, David Robertson, Nicholas McGegan, Jeffrey Milarsky, and Paul Watkins.

Ms. Turner is a devoted advocate for contemporary and modern music. She has collaborated with many living composers including Paul Novak, Max Vinetz, Lauren Vandervelden, Corey Chang, Sujin Kang, Webster Gadbois, and Sofia Ouyang and has a strong affinity for the music of Stravinsky, Bartók, and Lutosławski. Ms. Turner is a member of the Colburn Contemporary Ensemble with whom she has conducted works by Lou Harrison, Timo Andres, and Nina Young. As part of Juilliard’s ChoreoComp, she premiered four different dance pieces created by current student composers and choreographers and at Rice, she conducted and composed for Hear&Now: New Music. Pursuing projects outside of the traditional concert hall is a core part of her artistic identity.

Ms. Turner completed her master’s degree in orchestral conducting at The Juilliard School studying with David Robertson and received a bachelor in music composition cum laude from Rice University. She is now pursuing an artist diploma at the Colburn Conservatory of Music in Los Angeles, where she studies under the guidance of Esa-Pekka Salonen in the Negaunee Conducting Program as a Salonen Fellow. She has studied composition with Kurt Stallmann, Arthur Gottschalk, Karim Al-Zand, and Richard Lavenda. She has attended the Cascade Conducting Workshop as the sole Conducting Fellow, Johannes Schlaefli and James Lowe’s Conducting Masterclass, and the Eastern Music Festival. In her free time, she enjoys biking, playing Ultimate Frisbee, and reading. 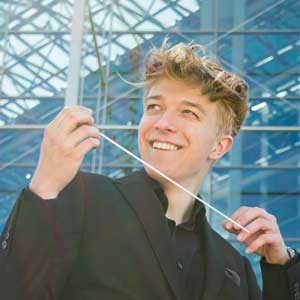 Ross Jamie Collins was previously a student of Jorma Panula at the Panula Academy in Finland, Ross began his studies with Esa-Pekka Salonen at Colburn in the fall of 2019. In 2018 he was awarded Third Prize in the VII International Jorma Panula Conducting Competition, and in 2019 he made his debuts with the South Denmark Philharmonic and the Kirkkonummi Chamber Orchestra. Born in 2001 in Nottingham, United Kingdom, Ross has been living in Helsinki, Finland since 2008 where he began conducting studies at the age of 14 with Klaus Mäkelä. In 2017 he founded his own orchestra, named Symphony Orchestra ROSSO, and conducted a full symphony concert at the age of 15.

As a student of Esa-Pekka Salonen, Ross has travelled and assisted him at the Philharmonia, NDR Elbphilharmonie Orchester, Helsinki Philharmonic Orchestra, Orchestre de Paris, Houston Symphony Orchestra, Philadelphia Orchestra and the San Francisco Symphony. He has also had the opportunity to work closely alongside Edo de Waart, James Conlon, Ludovic Morlot, Rossen Milanov, Peter Oundjian and Ray Chen and has conducted both the Colburn Orchestra and Academy Virtuosi. 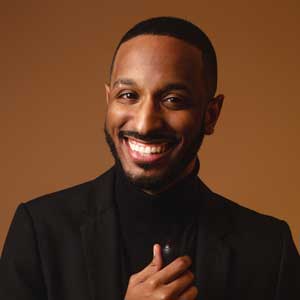 American Conductor Kyle Dickson is quickly building a reputation as an innovative and compelling presence on the podium. He is Assistant Conductor of the Inner City Youth Orchestra of Los Angeles and previously served as Music Director of Chicago’s South Loop Symphony.

In 2019, Dickson was selected to be Assistant Conductor of Spoleto Festival USA for the world premiere of Rhiannon Giddens and Michael Abels’ opera, Omar. As a Conducting Fellow at the 2021 National Orchestral Institute and Festival’s Conducting Academy at the University of Maryland, he learned from conductors Marin Alsop and James Ross and led the world premiere of Just Dreams by composer Tyler Taylor. For the past two seasons, Dickson has worked with Chicago Sinfonietta as a Project Inclusion Freeman Conducting Fellow under the mentorship of Music Director Mei-Ann Chen.

Dickson fosters an ardent passion for music education and has regularly coached many youth ensembles including the Chicago Youth Symphony Ensembles, the Sphinx Organization’s Overture program, New Music School, and the Hyde Park Youth Symphony. In 2018, Dickson debuted the Chicago West Community Music School Orchestra. Through his work with Chicago Sinfonietta’s Project Inclusion Ensemble and D Composed-Chicago, he has given numerous masterclasses and webinars for arts programs including the National Symphony Orchestra’s 2021 Summer Music Institute, the Naperville School of the Arts, Boulder Suzuki Strings, Wisconsin Conservatory of Music and Ravinia’s El Sistema program. As a chamber musician, Dickson has held residencies at Indiana University-South Bend, the Javacya Arts Conservatory in Tallahassee, FL, and the United World College of South East Asia in Singapore.

Dickson earned his Master of Music degree in Orchestral Conducting at Northwestern University where he led performances as Assistant Conductor of the University’s Baroque Music Ensemble and Symphony Orchestra. His principal conducting teachers were Victor Yampolsky and Dr. Robert Hasty. Dickson also received degrees in Violin Performance from Michigan State University (BM) and DePaul University (MM). His principal violin teachers include Dr. Walter Verdehr, Dr. Laura Roelofs, and Dr. Olga Kaler. Kyle is now pursuing an Artist Diploma at the Colburn Conservatory of Music in Los Angeles, where he studies under the guidance of Esa-Pekka Salonen in the Negaunee Conducting Program as a Salonen Fellow.