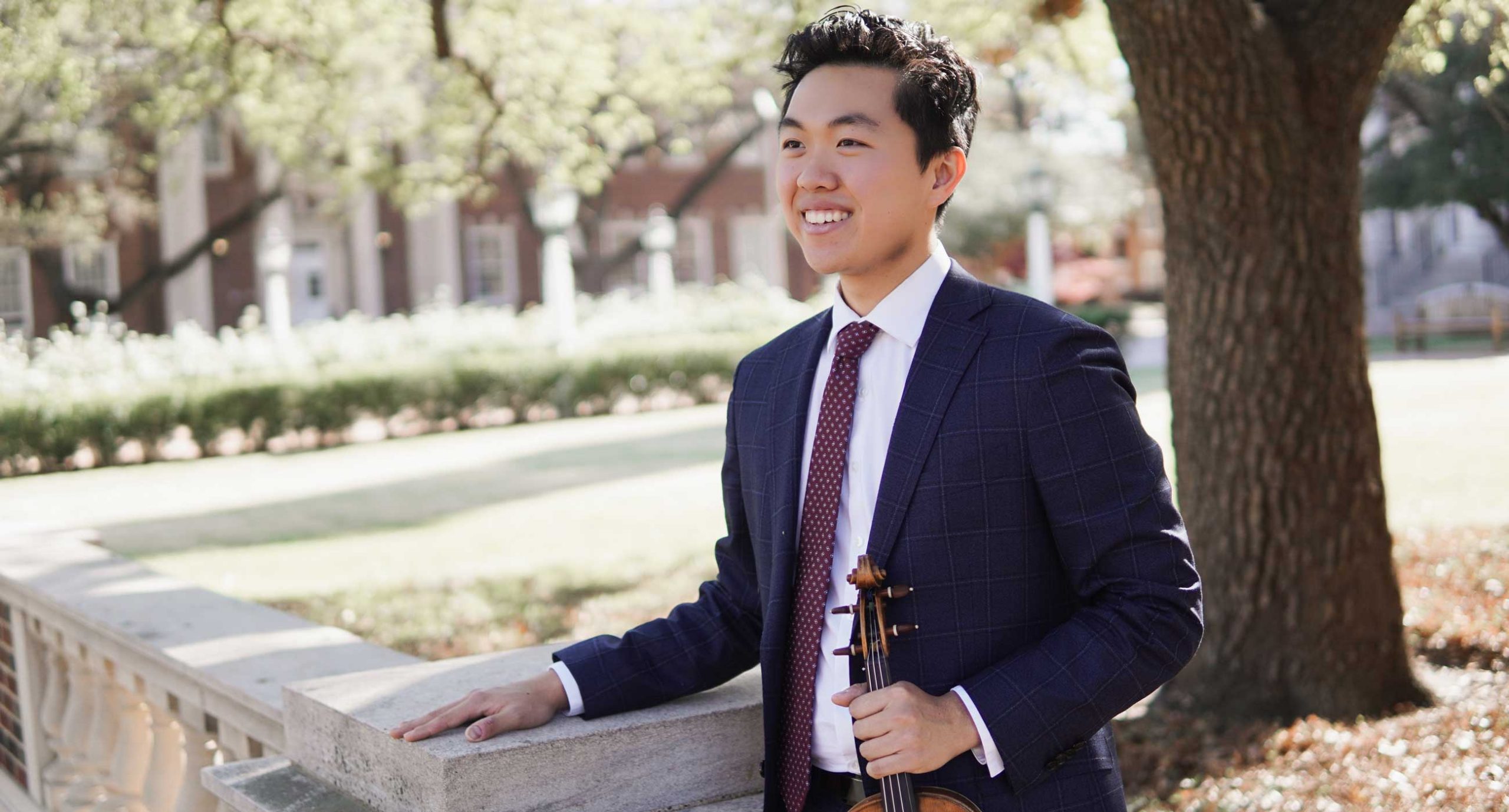 Violinist Hao Zhou is the inaugural recipient of the Frances Rosen Violin Prize, named in celebration of Mrs. Rosen’s life in music.

Last fall the Colburn School announced the Frances Rosen Violin Prize, named in celebration of Mrs. Rosen’s life in music and her mentorship, friendship, and care for all students who crossed her path as the steward of the Colburn Instrument Collection for 25 years. This prize is given to one outstanding Conservatory of Music violinist each year in recognition of not only their exceptional artistry, but also their commitment to being an outstanding “Colburn citizen.” This year, we are honored to name Hao Zhou as the inaugural recipient of the Frances Rosen Violin Prize.

Hao’s history with Colburn dates back to when he was just 13 years old. At the recommendation of his former violin teacher, he enrolled in the Community School of Performing Arts to study with Henry Gronnier. “I was excited to be at Colburn, but I had no idea how supportive and wonderful my time here would turn out to be,” says Hao, having now spent 11 years at the School.

As he reflects on his time at Colburn, it’s clear that Hao is indeed the definition of what it means to be the “whole artist,” a philosophy that was dear to Frances Rosen and served as the foundation of her supportive approach to developing an artist. When asked how he reacted to receiving the news of his award, Hao remains humble and gracious. “It was a little bit of a surprise. I have so many great friends and colleagues at Colburn who are equally deserving, and I feel very grateful and honored to be the first recipient.”

A recurring theme of our conversation with Hao centers around community and the role each individual plays in contributing to its vitality. He recalls a quote from a Colburn faculty member: “Yehuda Gilad said it really well. He said, ‘To be a great musician, you have to be a great person.’ And, like anyone else, I have my ‘off days’…but I do try to be kind, courteous, and collegial with all of my peers. I think this is especially important in a small community like Colburn, where everybody knows each other. You have to want to be a person that other people want to be around. This spirit of being together and making music together is what makes Colburn such a great place.”

In thinking about the opportunities that await him in the future, Hao’s love for chamber music and passion for collaboration come to life. He’s most at home when he’s on stage, especially when joined by his friends Aiden Kane, Lucy Wang, and Tate Zawadiuk in the Viano String Quartet. “From the first couple of notes we played,” Hao pauses and snaps his fingers as though everything just fell into place, “We were just like, ‘Yeah, that’s great—we love playing with each other.’ I’ve grown so much alongside the three of them, and they’ve influenced me in unbelievable ways.” He adds that he’s excited for the recording opportunity provided as part of the Rosen Prize and looks forward to creating an album of chamber music and collaborative works with his colleagues from the Conservatory.

We extend our warmest congratulations to Hao for winning the Frances Rosen Violin Prize this year. We invite our Colburn community to join us in celebrating him as he moves to Philadelphia this fall to begin his studies in the Curtis Institute of Music’s Nina von Maltzahn String Quartet Program.