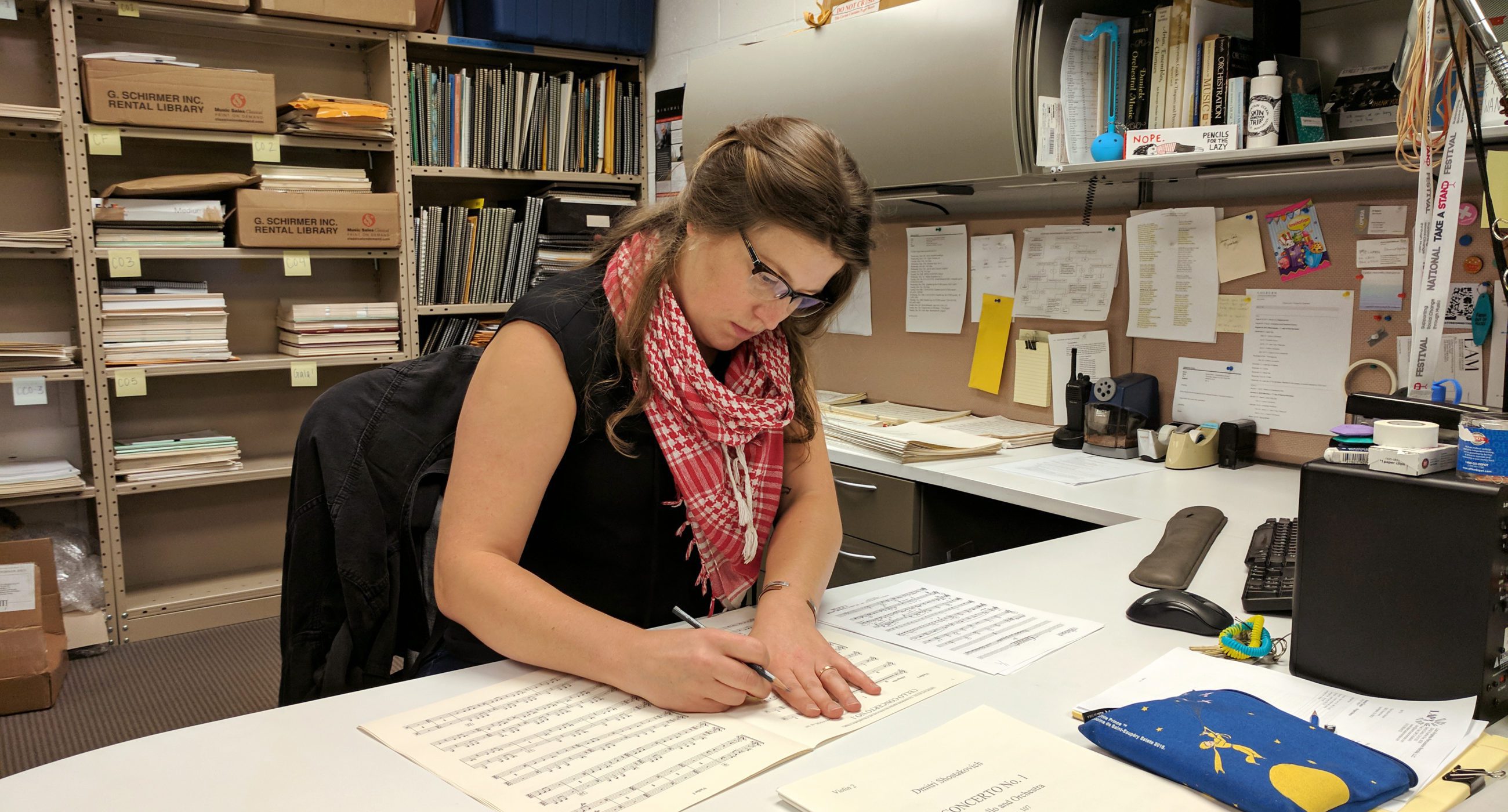 Last week was the first Colburn Orchestra rehearsal of the season, and for a select few of our musicians, it was their first time seeing the physical copies of the music they will perform this Saturday at Ambassador Auditorium. But contrary to what some might believe, the music doesn’t just appear out of nowhere. It is meticulously prepared, through a frenzied and rarely linear journey, by our orchestra librarians, Jo Groh and Alison Verderber.

The two are responsible for obtaining sheet music; making sure all the music is coherent, legible, and with all the same markings; customizing scores for musicians’ preferences; housing music in their small, filled-to-the-brim office; helping inform repertoire choices; and physically transporting music to rehearsals and concerts. They, to put it lightly, take pride in their work.

Many months before the season begins, the librarians meet with a committee that determines orchestra repertoire for the upcoming season. Many factors go into what repertoire is selected, including instrumentation, timing, theme, and academic purpose. For the first orchestra concert, programming was built around the Walton Cello Concerto, featuring Conservatory cellist Youna Choi won last year’s concerto competition and a solo in one of our subscription series concert this season. From there, the committee decided on an English theme. They thus selected Elgar’s Enigma Variations, which the Colburn Orchestra performed in 2012, conducted by Sir Neville Marriner. Guest conductor Courtney Lewis chose Esa-Pekka Salonen’s LA Variations, written for the LA Phil when he served as music director.

“We handle both library and personnel, so we have to know all sides of the discussion. We talked about doing John Adam’s City Noir but it had some crazy instrumentation and we would have had to hire a lot of people,” Jo explained.

Once repertoire is decided, the librarians are given a budget, and from there, must figure out how to procure music. The process for each piece is different. Most hunts start with the publisher, but some require a little more digging.

“The Walton Cello Concerto was from a publisher that originally sent us this set of parts that was printed back in the ‘50s,” Jo told us. “The word ‘printed’ is used very loosely in the situation,” Alison interjected.

The ink and paper on those parts was so old and worn that when they tried to erase previous markings, the paper disintegrated with it. There was no way they were going to hand those scores out to our students in that state. Luckily, our librarians are adept at Photoshop. They regularly darken and add markings, fill in missing note heads, and even dissect and rearrange sections of music when conductors have requests.

After a painstaking patch-up job, the Cello Concerto was almost ready for distribution. All it was missing was a bow master: markings that tell string players what direction their bows should go in, giving the section a uniform look during a performance.

Usually, Jo asks the librarian at the LA Phil for bow masters, or if they don’t have it, a library consortium made up of conservatories and the larger schools of music in the US. But the Cello Concerto is rarely performed, so her usual suspects couldn’t help.

“So I ended up going on Spotify and finding the last orchestra that did a recording of it—it was the BBC. I know one of the librarians at the BBC so I emailed him asking him for the bow masters, and he sent me these,” Jo said, gesturing to a clean, new edition of the concerto. “I was like, ‘Hold up. Why is this engraving so much nicer than the set we got in the mail?’”

After asking the publisher if they carried the nicer engraving, Jo was able to get her hands on a new set of music, which meant that all of the work she had done previously was moot.

“Besides all of that craziness, the Walton wasn’t that hard to prep. The scores were actually pretty easy to mark up, and we just had to go through and put in bowings in so that every single string part matches within the section.”

LA Variations, however, was a completely different story. After extensive erasing of parts she got in the mail, Jo had to make a new set of music for the strings, percussionists, and wind players. Their music gets marked up, and it’s easier for her to just clean the score once, make photocopies, and return a clean set to the publisher. That involves printing, assembling, taping, and marking up each score for individual musicians. “We go through a lot of erasers here.”

Marking each score proved to be the challenge with LA Variations, given the numerous divisis, sections that have multiple parts within a part. Jo methodically went through each musician’s part to determine, based on their seat, which line they played.

“It was more about keeping the road map of the piece in mind. I had to think about what person is playing which note at any given time, and how I could effectively mark that for the musicians so they know where they’re going in this piece.”

After the first rehearsal, she seemed pleased. “No news is good news in library land. When we don’t get feedback, it just means we did our jobs correctly.”