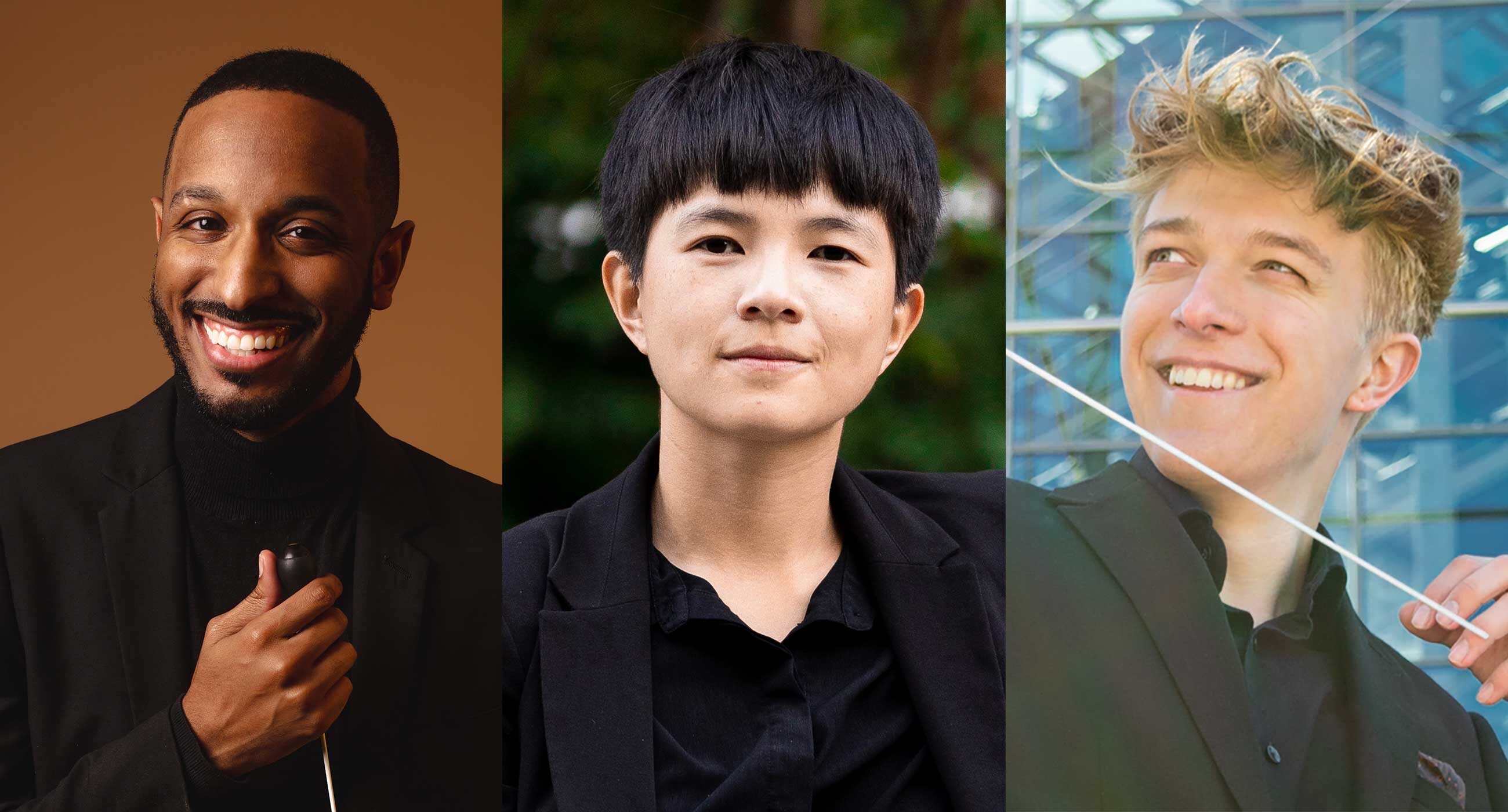 All three Salonen Fellows were recently added to the conducting staff of the San Francisco Symphony, where they will serve as an assistant conductor to Esa-Pekka Salonen for each of his programs during the 2021–22 season. We caught up with all three fellows recently to find out what brought them to Colburn, what they’re especially looking forward to this year, and their hopes for the future.

I can't wait to start forging bonds and making music with such a dynamic group of players [at Colburn]. Kyle Dickson

Kyle is the Assistant Conductor of the Inner City Youth Orchestra of Los Angeles and previously served as Music Director of Chicago’s South Loop Symphony. He fosters an ardent passion for music education and has regularly coached many youth ensembles including the Chicago Youth Symphony Ensembles, the Sphinx Organization’s Overture program, New Music School, and the Hyde Park Youth Symphony.

Please share your background personally and musically.
I grew up in Detroit! Even though I loved singing in my elementary general music class, I didn’t get my real start in music until much later. I had considered being a teacher, heart surgeon, or a politician before I saw a Winans Academy of Performing Arts Orchestra concert and fell in love with music. I begged my parents to enroll me the next year, and it was there that I learned theory, piano, violin, and viola.

What were you doing prior to joining the Conducting Fellows Program?
I was finishing my MM at Northwestern in Chicago and conducting two orchestras: the South Loop Symphony and South Side Chicago Youth Orchestra. I was also working with Mei-Ann Chen and the Chicago Sinfonietta as a PIE Conducting Fellow. I had a pretty eclectic season as a freelance violinist at the same time; playing in chamber groups, subbing with several local orchestras, doing some studio work and remote recordings, and coaching youth ensembles!

Why are you pursuing conducting?
I was drawn to conducting as a teenager. I tried cello, viola, piano, voice, and considered conducting before settling on violin. I’d even put on imaginary concerts in our living room and conduct along to recordings with only my parents in the “audience.”

Connecting people and collaborating with others has always been important to me as an artist, so when I was diagnosed with a neurological disorder that could affect my playing, I was forced to reevaluate my future as an instrumentalist, and I returned to conducting as a way of engaging with my passion. I know how important representation is, and I know first-hand how impactful representation can be in my community to see someone like me on the podium, so I’m pursuing conducting because this is the most
meaningful way for me to continue to create musical experiences with others while being an advocate for our art in all communities.

What are you looking forward to this season?
I’m really looking forward to working closely with and learning from Maestro Salonen! I’m excited to get to know the amazing musicians that comprise the orchestras I’ll be meeting this season, and also to be connecting with the artistic community at Colburn. There’s so much to learn from both the faculty and students. I’m inspired by the level of musicianship here, and I can’t wait to start forging bonds and making music with such a dynamic group of players.

What piece would you love to conduct someday and why?
If I have to narrow it down to one piece it’d be Stravinsky’s “Rite of Spring”! It was one of the first pieces I performed in undergrad, and it made a huge impression on me. It’s animalistic and visceral, and at the same time mystic and plaintive in parts. It was a huge achievement in rhythm and orchestral texture, and it’s a tour de force for any conductor. On top of that it’s just a lot of fun!

What’s on the horizon for you?
Right now, I’m preparing to make my Chicago Sinfonietta debut this season with works by composers Jessie Montgomery and Florence Price! I’ll be covering concerts for Maestro Salonen with the NDR Philharmonie, Los Angeles Philharmonic, Orchestre de Paris, San Francisco Symphony, and Chicago Symphony. I’m also looking forward to working with the Colburn Academy Virtuosi this fall on a great program that includes Walker’s “Lyric for Strings” and Schubert’s “Death and the Maiden” for string orchestra!

Kyle began his career as a violinist and earned his Master of Music degree in Orchestral Conducting at Northwestern University.

Ultimately, it is a miracle how an orchestra can play completely different parts in a way that makes any sense. I conduct because I want to make sense of this crazy world. Molly Turner

Molly conducts, plays, and writes music. Recently, she was featured conducting the Dallas Opera Orchestra, the Juilliard Orchestra, Rice Campanile Orchestra, and the Eastern Festival Orchestra. She was selected as one of six participants for the Dallas Opera’s Hart Institute for Women Conductors.

Please share your background personally and musically.
Starting from a young age, I always had a strong affinity for improvisation and this ultimately led me to study music composition as an undergraduate. During my first year in college, I also pursued pre-medical studies. This scientific coursework actually helped me later in my analytical score study as a conductor! As a composer, I found myself in orchestra rehearsal all the time, listening for new sounds and techniques. I soon began a study of orchestral conducting and got most of my early opportunities conducting my own and fellow composers’ works. I was lucky to study with David Robertson at Juilliard to receive my formal conducting training.

Why are you pursuing conducting?
Conducting for me is a whole world. There is first and foremost the score. But there is also the context in which that score was written. There are original manuscripts, score revisions, subtext, and sometimes programmes written by the composer. There is the architecture and pace of a performance. There is the relationship between the audience and the performers. There is the psychology of an orchestra—how they listen to each other, watch the conductor, and watch each other. Ultimately, it is a miracle how an orchestra can play completely different parts in a way that makes any sense. I conduct because I want to make sense of this crazy world. And as a composer myself, I feel a deep duty to fulfill the ultimate intention of a composer.

What are you looking forward to this season?
Sounds oddly specific, but I am looking forward to watching Esa-Pekka Salonen work with different orchestras on the same piece. When I studied conducting at Juilliard, our program was structured around Lab Orchestra. Lab Orchestra is exactly what it sounds like—a fairly controlled environment and dedicated to learning how to conduct. This was exactly what I needed to start my study of conducting. I could learn the precise effects of my gestures in that environment. However, Lab Orchestra is just one environment. It is a group of very talented students, but not every orchestra is the same. That is the beauty of working with different orchestras. Some play quiet sections beautifully, some play behind the beat ever so slightly, and each orchestra balances out in different ways. Hearing rehearsal with the same piece with different orchestras is a really unique learning opportunity, akin to twin studies in science. And, of course, I am looking forward to Salonen’s mentorship and guidance.

What piece would you love to conduct someday and why?
“The Rite of Spring.” It is primal, beautiful, supple, a dance to the death, and revolutionary—all in the span of a half an hour. This piece has a great significance to me as a composer because when I first came across it when I was in high school, I simply did not know what to make of it. It broke so many “rules” that I had read in books and opened so many doors. It continues to be an immensely important piece for me.

What’s on the horizon for you?
Well first I am getting settled into Los Angeles! I grew up in Seattle, so it’s great to be back on the west coast. I look forward to conducting Lou Harrison’s Violin Concerto with Fiona Shea and the Colburn Contemporary Ensemble as well as performances of Stravinsky L’Histoire du Soldat and Marsalis A Fiddler’s Tale in October. I will also be doing the first rehearsal of Bruckner Symphony No. 6 for Salonen’s concert with the Colburn Orchestra this fall. I also look forward to returning to composing.

Molly studied with David Robertson at the Juilliard School for her master’s degree and received a bachelor in music composition from Rice University.

It’s fantastic to be back at Colburn. As well as spending time with friends, I’m really looking forward to creating music with ensembles, rehearsing with the Colburn Orchestra, and conducting the Concerto Forum. Ross Jamie Collins

As a student of Esa-Pekka Salonen, Ross has travelled and assisted him at the Philharmonia, NDR Elbphilharmonie Orchester, Helsinki Philharmonic Orchestra, Orchestre de Paris, Houston Symphony Orchestra, Philadelphia Orchestra and the San Francisco Symphony. In the 2021–22 concert season, he will make his debut with the Turku Philharmonic, Finland’s oldest orchestra, where he will be leading them alongside the classic British animated film The Snowman.

What are you looking forward to this season?
It’s fantastic to be back at Colburn. As well as spending time with friends, I’m really looking forward to creating music with ensembles, rehearsing with the Colburn Orchestra, and conducting the Concerto Forum. It’s great to have Molly and Kyle form a bigger conducting class this year where we can share our experiences. This fall I have a couple of trips to San Francisco to assist Esa-Pekka Salonen with the San Francisco Symphony. In the spring, I’m thrilled to conduct London’s Philharmonia Orchestra with Randall Goosby as a soloist.

What piece would you love to conduct someday and why?
There are so many pieces that I would love to conduct. But if you asked me today, it would have to be Mahler’s 9th Symphony. As for why? I love how the emotional tension is sustained throughout the work. Despite the giant orchestration, the spirit of the work is kept contained and sustained for the duration of over an hour. It travels through high, low, and the playful, to the heart-wrenching last movement where even singular notes can make you cry. It has a special place in my heart.

What’s on the horizon for you?
While enjoying my time at Colburn, I’m looking to mature as a conductor. I am excited about an upcoming “Film to Live Orchestra” engagement in Finland with the Turku Philharmonic. It is a chance to see my friends back at home and spend Christmas with my family in England.