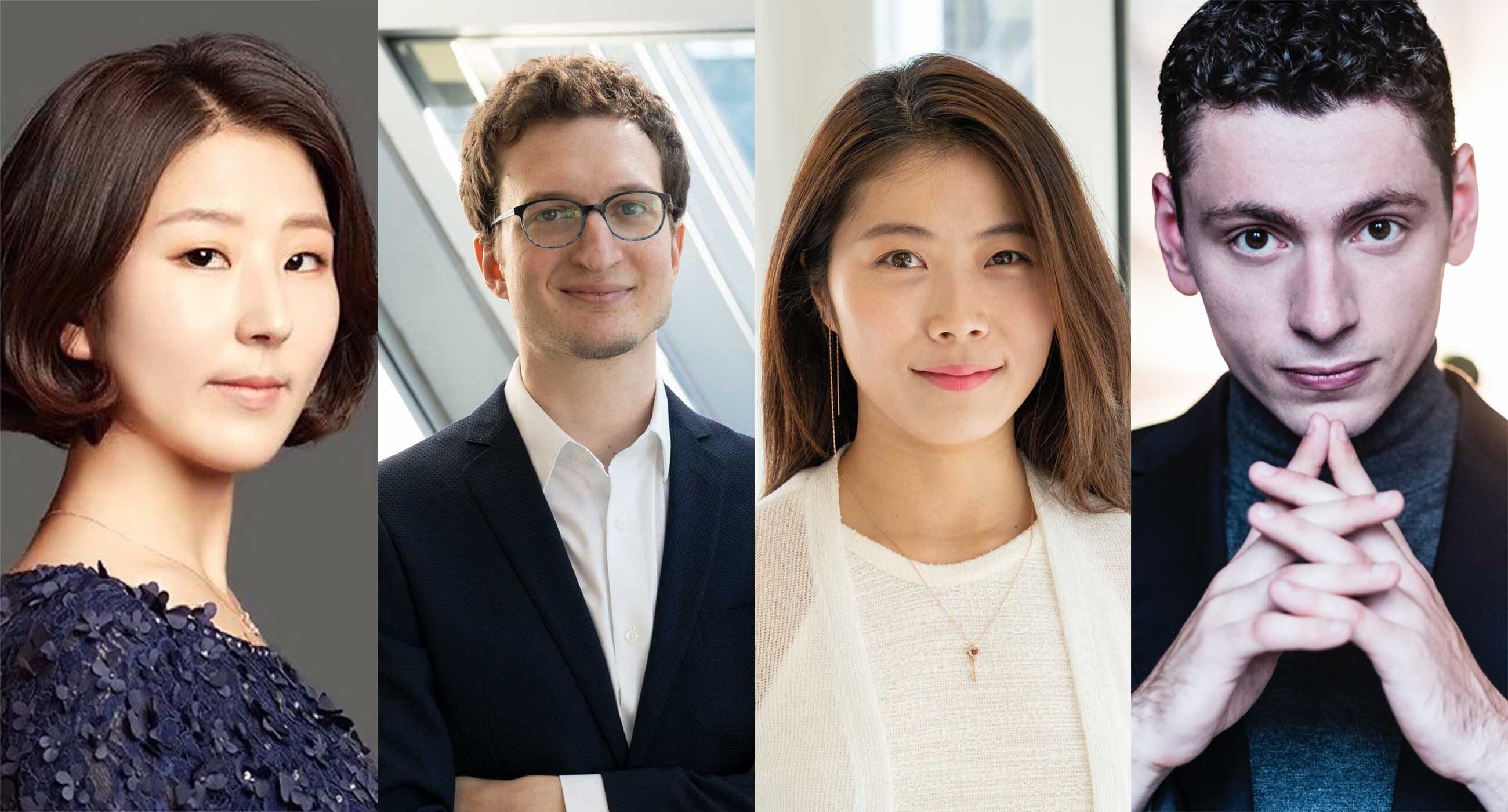 Colburn’s new fund provides financial support for young pianists on the cusp of a professional career.

The inaugural class of Amron-Sutherland Fund grantees comprises four young Colburn alumni beginning their professional careers in performance: Dominic Cheli (‘18), Minhye Choi (‘20), HyeJin Kim (‘18), and Rodolfo Leone (‘19). Established through the estates of siblings Bruce and Mitzi Sutherland, this new fund provides financial support for recently graduated pianists of the Conservatory of Music who are working to launch their professional careers as pianists.

Bruce Sutherland was a pianist, composer, and teacher. His performances and compositions took him around the country, but he lived most of his life in Santa Monica, California, working with a loyal studio of students including Diane Baker, Rufus Choi, Hyongsoon Kim, Max Levinson, Anders Martinson, and John Novacek. Bruce was honored by the White House Commission on Presidential Scholars as a “Distinguished Teacher.” And in 2009, a concert was held in his honor in Colburn’s Zipper Hall featuring former students performing his own works. (You can watch a pre-concert interview with Bruce here.)

During Bruce’s life, he observed with great intimacy the difficulty even the most talented conservatory graduates experience as they worked to achieve a viable piano career. In 1997, he founded the 501(c)(3) AMRON Foundation (Artist Musician Recital Opportunity Network)—a play on Norma, the name of his mother who was also a pianist—to provide support to these aspiring musicians.

Bruce worked with Colburn in 2009 to establish the Amron-Sutherland Fund at Colburn, with the intention that his estate would fund an endowment at Colburn after his and his sister Mitzi’s death. This Spring, the first distribution of grants were awarded to the a wonderful group of aspiring young pianists.

Read more about the 2020 grantees and their already promising careers below.

“The world is entering a new chapter. Many performances are becoming virtual, and I am excited to embrace new possibilities. This funding will help me continue to improve my technical capabilities in recording, producing, and creating content that shares my love for the music that I play.”

Dominic Cheli graduated from Colburn in 2018 with an Artist Diploma, having previously studied at the Manhattan School of Music for his bachelor’s degree and Yale for his master’s degree. In 2017, Dominic won the Music Academy of the West’s Concerto Competition with a performance of Prokofiev’s 2nd piano concerto that Santa Barbara Voice Magazine described as a “barnstorming Goliath.” He’s made his mark alongside the Metropolitan Orchestra of St. Louis, the San Diego Symphony, and the DuPage Symphony, and he recently made his Carnegie Hall Recital debut.

“My plans after graduation have all been either cancelled or suspended for an unspecified duration. So I set up a plan B in the short run, which is to learn as much as repertoire during this self-quarantine time and to prepare for concerts and recordings which might be rescheduled soon. […] This fund will majorly help me to start my real life, and it is also real financial support.”

Hailing from South Korea, pianist Minhye Choi graduated this past spring with her Professional Studies Certificate. She earned her bachelor’s and master’s degrees in Europe and has performed in prestigious venues such as the Schumann Haus, Mendelssohn Remise, Steingraeber & Söhne Haus, and the Mokpo Art Center. In 2017, she won the audition, Young Talented Musician hosted by Korean Culture Center in Berlin, and in the same year, she was invited to an international summer festival in Gottingen, Germany with her piano trio members. In 2016, she was the youngest finalist in the 7th Joseph Joachim Chamber Music Competition.

“As a pianist and an educator, sometimes I am conflicted about my ultimate end goal. [. . .] I hold a view that the mission as a classical musician and an educator is to spread the right message of the music in order to enrich our community and our lives in one way or another. [. . .] My duties as a musician is to carry on this incredibly important aspect of music and to devote myself to achieve the mission above.”

HyeJin Kim, currently on faculty in the Colburn Community School of the Performing Arts, earned her Artist Diploma in 2018. HyeJin first attracted international attention at age 17 when, as its youngest participant, she won third prize in Italy’s prestigious Busoni Competition. She went on to earn her master of art in musical art as a “Konzertexamen” (highest distinction) at Berlin’s Hochschule fur Musik Hanns Eisler. In 2013, she made her major label debut with her recording of Rachmaninoff’s Piano Concertos Nos. 1 and 2, with the Armenian Philharmonic Orchestra led by Eduard Topchjan, on Sony Classical.

“[T]his recent health crisis underscored for me that there is always going to be uncertainty and unforeseen circumstances, and that once again, the path to a self-sustaining career in the professional music world is a tortuous one. The arrival of this funding, was as unexpected as it was welcome, as it provides me with the opportunity to continue on this path with renewed resolve, and with the financial freedom to bridge to a time when hopefully live music will be a possibility again.”

Rodolfo Leone, who recently signed on with MKI Artists, was awarded his master’s degree by Colburn in 2017 and stayed on to earn an Artist Diploma in 2019. Since then, Rodolfo has performed as a soloist with the San Diego and Pasadena Symphonies as well as the LA Opera Orchestra. Rodolfo had successful auditions with the San Francisco Symphony and conductors Edo de Waart, Jaime Martin, Simon Woods, and Alexander Prior, all of whom extended invitations to work with him. In 2017, he was the first-prize winner of the International Beethoven Piano Competition Vienna. He released his debut album the following year on the Austrian label Gramola. The all-Beethoven disc features two pillars of the piano repertoire: the “Hammerklavier” Sonata and the “Waldstein” Sonata.

Learn more about the ways you can support aspiring artists at the Colburn School.