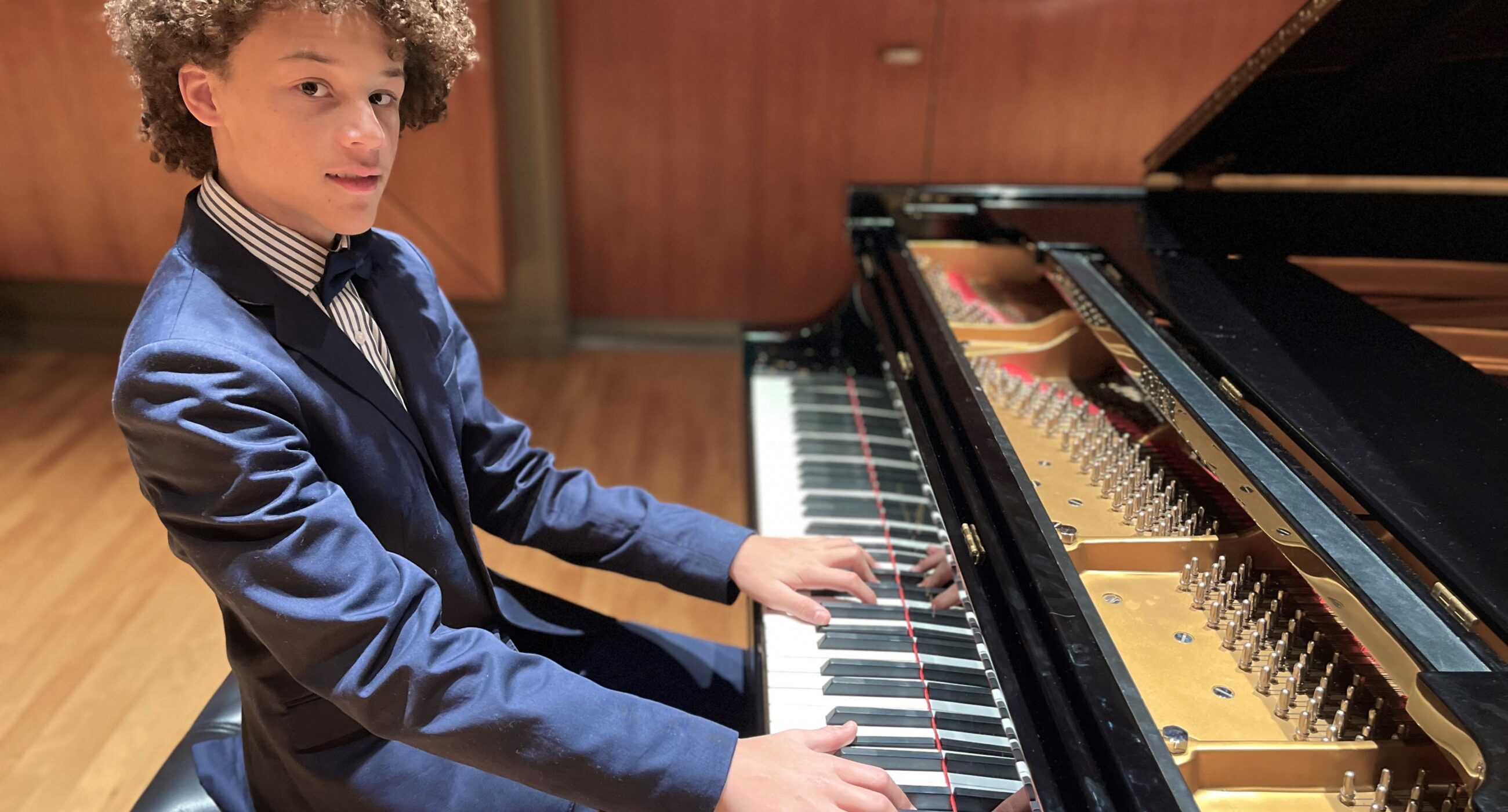 How did you hear about Colburn’s Music Academy?

The first time I heard about the Music Academy was through two people, Joe Illick and Gina Browning. I went to their house to play for them. Mr. Illick is the [artistic director and principal conductor of the Fort Worth Opera and formerly] the executive and artistic director of Performance Santa Fe. Gina Browning is a really, really good opera singer. And as they are so invested in music, they introduced me to Colburn.

You commute to Colburn for your studies from out of state. What is that experience like?

All of my Music Academy classes and private lessons take place on Saturdays, so I fly to LA on Friday and come back on Sunday. I’ll go by myself sometimes, but usually, my parents are with me to be supportive.

Do you remember what your first introduction was to music or the performing arts?

I started piano when I was five, but how I was first introduced to music may have been even a little earlier. As a kid, I was super energetic; I was just crazy. Even my nickname was Busybody. So my parents needed something to keep me focused, and they did find two main things. The first was swimming, that’s only because I would be so tired after I wouldn’t have any more energy. The second was music. It worked out really cool because at the time we were living downtown and there was the Lensic Performing Arts Center. There was the Santa Fe Opera and the Santa Fe Symphony. We’d get tickets and we would listen to a lot of different things.

Do you have a particular composer or a piece that you like to either perform or listen to?

Well, I like all my pieces that I play! I heard a recording by Van Cliburn of a piano concerto by Tchaikovsky when I was younger and that stuck with me, and I haven’t learned it yet. But I always was, okay, I’m going learn that piece. The second most memorable piece was from a performance by Yuja Wang on her concert tour I saw when I was six or seven. She played Stravinsky’s Petrushka. It was an arrangement for piano only, but it was really cool.

As this is your first year in the Music Academy, would you share your audition process experience?

At my online audition, I remember there were several people watching. I played a couple pieces, and piano faculty Mr. Bidini only wanted to hear some of the pieces, which I thought was pretty smart for timing since it focused on the most significant moments of each piece. Then afterward I was asked some questions, and one of those was, ‘What is music to you’? Which thank goodness I got through that, as it was a very philosophical moment. And then a month later, we got an email with my acceptance.

What advice would you have for someone who’s considering the Music Academy?

Prepare your story and spend some time considering different questions—know your answer to ‘What is music to you?’ And of course, do all the preparation of your repertoire.

Have you performed in the Music Academy Young Artist Performance (MAYAP), and if so, how was that experience?

Yes, I have. I performed Rachmaninoff’s Prelude, and it was pretty smooth; it was my first MAYAP. The piano and acoustics were really amazing. It was crazy because I’m used to working with a piano outside of Colburn that’s a little difficult to control. It’s such an incredible advantage when you can [use a piano] that’s just really good. It’s a very interesting sound that is cultivated.

I had weeks of preparation, and then I had a lesson beforehand with my teacher prior to performing. It’s cool because MAYAP is the perfect place to do your first performance of a piece because all the students are super, super supportive; everyone respects each other for their unique talents.

What has been a memorable moment for you here at Colburn?

One is when I was a little nervous before MAYAP, and I played for Mr. Bidini. It was a super memorable experience because after I played, he just sat there and didn’t say anything for a whole minute. And then he said, ‘Good Kayden.’ And then, ‘Play it again so I can enjoy it.’ So first it was the moment for him to see if I prepared; I had, so I already succeeded. So after that, Mr. Bidini said, ‘Go have fun!’

Tell us about your experience with chamber music at Colburn.

Chamber music for me is really cool because this is the first time that I’ve done chamber music [as a pianist] with other musicians, and it’s super valuable. The year started out challenging, but the amount of experience I’ve gained from doing chamber music has really strengthened my skills. My reading ability has improved so much because I actually had to learn a lot of music. Also like orchestras, chamber music is the best thing to work with other people.

Is there anything in particular that you’re looking forward to in the spring semester?

Thinking further into the future, do you envision music continuing to be a part of your life?

Yeah, totally. Since I was young, I wanted to be a concert pianist. Right now, I’m focused on the short-term goals; I’ll try to take as much in, in the three years I have here. And then potentially applying for the Conservatory at Colburn.