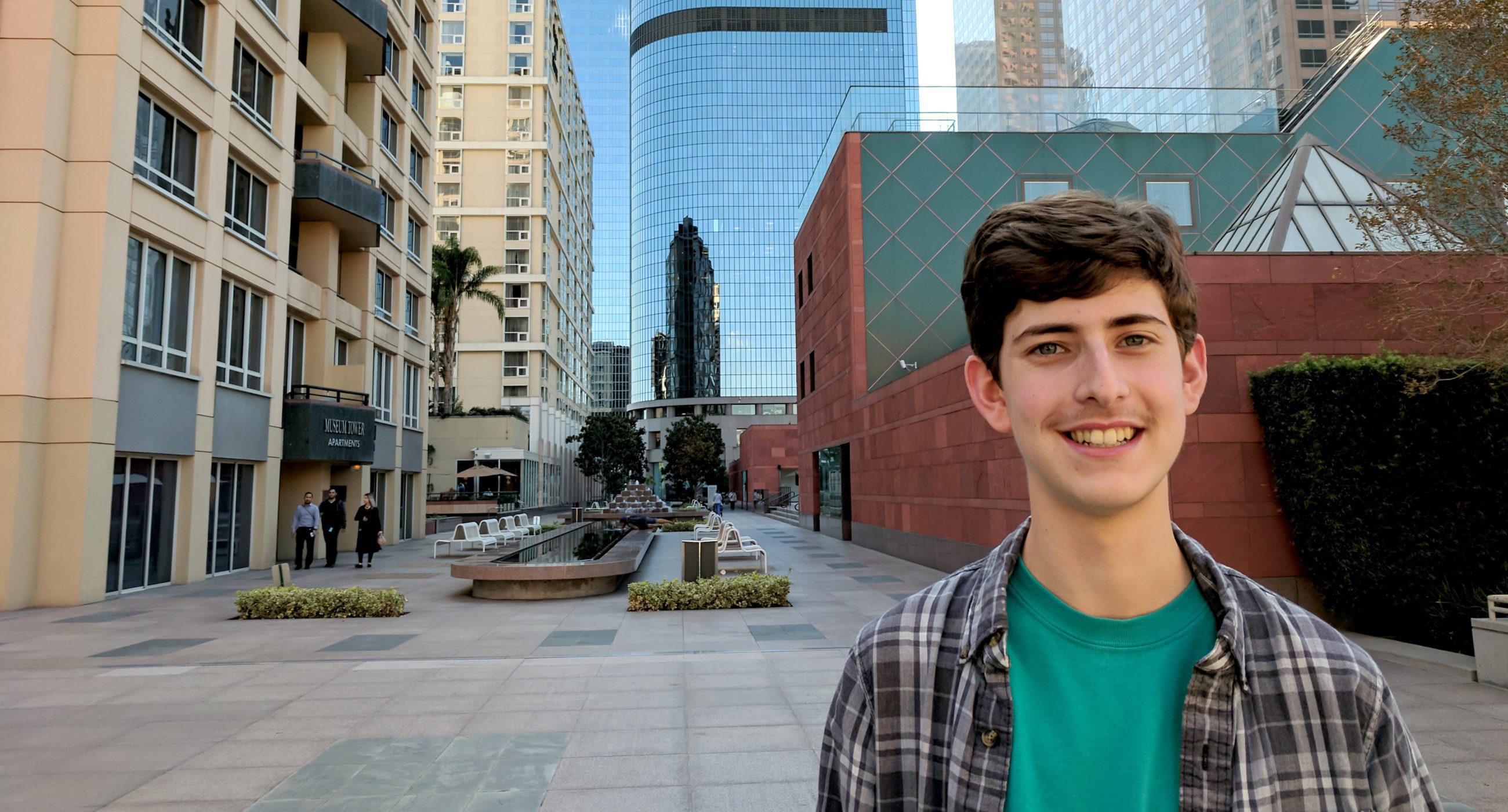 Ezra Shcolnik, 16 years old, has studied violin with Robert Lipsett in the Music Academy for four years. He recently became a fellow of the LA Phil Composer Fellowship Program, and will work with acclaimed musicians and composers to have his works performed by chamber groups and other professional musicians.

Why did you decide to study at Colburn?
The kind of high-level music training that I can get here doesn’t really exist where I’m from in Santa Fe, New Mexico. I had no idea what to expect when I applied here but I remembered just loving the environment when I came to audition. Later I watched a video of the Academy Virtuosi playing and I remember thinking how amazing it would be to play in this ensemble.

What’s your favorite thing at Colburn that you’re involved with or that you’ve done?
That’s a very hard question because everything that I do here and all the experiences that you can get here are what make this place so special—it’s the whole package. But I think if I had to pick one thing, it would be my private lessons because ultimately they’ve helped me grow the most musically and prepare for the future the most. They’ve given rise to a whole lot of opportunities I would never have had otherwise. Getting to play with the Colburn Orchestra is one thing I don’t think I would have ever had without Mr. Lipsett’s support.

What was it like rehearsing and performing with the Colburn Orchestra last week?
I feel so thankful to be asked to play with such a high quality orchestra. I had played with them some last year as well, but the Colburn Orchestra is the first large orchestra I’ve ever played with, which is amazing. I find it very humbling to go into the first rehearsal and see how well everyone knows their part and think, ‘I really need to work hard to actually contribute to this ensemble.’ But once I’ve done that work and I’m performing with the orchestra, I find that we’re all just feeding off of each other’s energy. It’s such an exhilarating experience.

Esa-Pekka Salonen’s LA Variations was one of the most challenging pieces rhythmically that I think I’ve played. There was nothing to latch onto as you would in many other pieces, but once it all came together, I think it was well worth it and really such an interesting piece. It’s not terribly easy to grasp at first, but there’s a purpose to what the composer’s trying to do with the music and when you see that it’s certainly worthwhile. I also really appreciate the reaction of the audience to the music. Not that long ago, people would have reacted to this music quite differently than they did. But when it’s played well, when it’s good music, it doesn’t matter that it’s new; the audience will still be really interested, which is a great sign of the times when it comes to new music.

What’s one piece of advice you’d give to a student who wants to study here?
I would tell them to embrace the experience wholeheartedly and take advantage of everything Colburn has to offer because Colburn has so many opportunities if you’re engaged and willing to accept them. I think that the more you give here, the more rewarding your experience will be.

What’s one fun fact about you?
Unlike most of my classmates, I’ve never actually been out of the country before. That’s probably pretty unusual for Colburn. But that doesn’t mean I don’t want to go someday!

What do you want to do with music in the future?
I also compose, so I want to find some way to combine performing and composing, which can be a thing of the past in some ways. I also have a great desire to teach. I have no idea how all these things will be combined, but I’m really looking forward to finding out. For now, I’m so happy to be here getting all the training that I need to hopefully do what I want and to help others through my music.