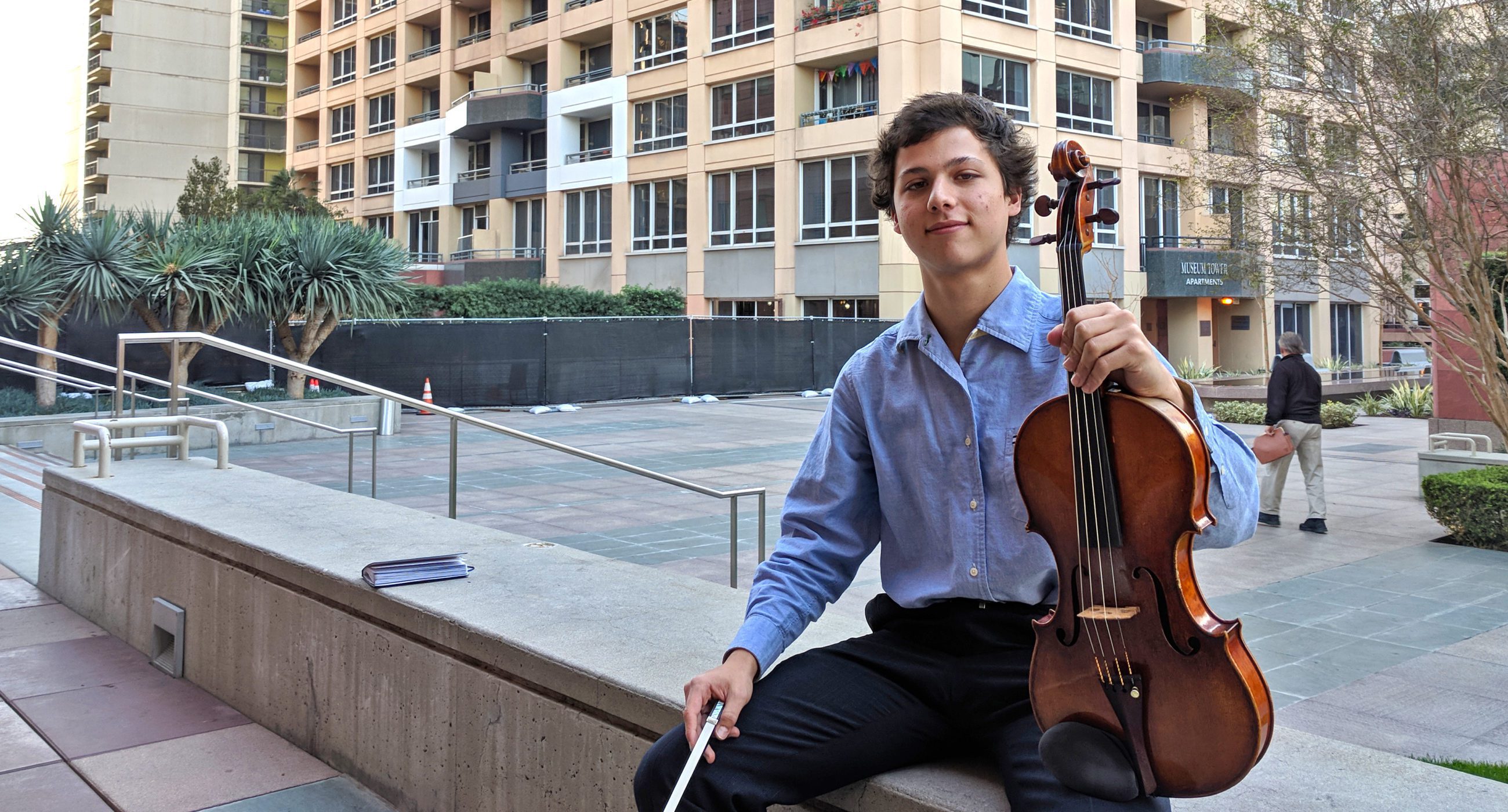 Julian Seney, 17, has been playing viola for three years. He has been at Colburn since 2014: first in the Community School of Performing Arts, and now as a student of Mr. Coletti in the Music Academy. He is a current member of the American Youth Symphony and Share-A-Stand outreach program. Julian moved to Los Angeles from New York when he was five years old.

How did you get your start at Colburn?
I joined the Community School to be around people who were serious about what they do. No past experience has compared to Colburn, since it’s centered around the study of music.

How did you come to study with Mr. Coletti?
I wanted to study with him for many years, but I knew I wouldn’t get in. He accepted me because he saw something in me, not in my playing. He understood the musical ideas I was trying to communicate yet lacked the technique to execute, and knew that he could help. Compared to my peers, I’m very far behind in my studies. But having such a high bar to reach for is exactly what I needed. I am very grateful to be studying with Mr. Coletti among such dedicated and talented musicians.

You’ve only been playing viola for three years. Did you play another instrument before that?
I played violin, but not seriously. I didn’t have a real teacher until I began studying with Cindy Wu. She’s a recent graduate of Curtis and USC. She taught me how to be logical and scientific when I approach music, and to really understand the purpose of practicing. She was the first person that challenged me to think methodically about the things that I do. She’s the one that got me here. Even though I owe everything to my mom, I owe this to my previous teacher. Without her, I definitely would not be in the Academy.

What made you decide to switch to viola?
I heard a solo recital at Disney Hall featuring Carrie Dennis, the previous Principal Viola of the LA Phil, playing the Bartók Concerto. Her playing was one of the most gorgeous things I had ever heard, and I wanted desperately to communicate to others as she did. Also, being a violist has a very different atmosphere—the people are more amicable. I feel as though I am where I was meant to be.

What have you been involved with at Colburn?
I was in the Community School before. I participated in orchestra, chamber music, and a conducting course, all of which has improved my musicianship greatly. I prefer to approach music in the way that conductors do, because they see everything as a whole. I think that for most of my studies, I have been paying attention to just my part, and not the overall architecture, so this opened my eyes to a much wider perspective. Since I joined the Academy, I have essentially the same agenda, just with different teachers and peers. As an Academy student, chamber music has become a larger part of my life, and I hope that it remains so in the future. One major contrast is working to a greater extent alongside Conservatory students, who constantly inspire me to demand more of myself.

You’re performing in the Music Academy Chamber Music Fest this Saturday. What has it been like preparing for that?
It has been both fascinating and fulfilling to approach chamber music studies more seriously, because it’s distinct from my initial experiences. Every time we rehearse, I learn something new: about the music or my role within it. Everyone in my current group is very committed and skilled, to the point where I once felt that I may hold them back. But it just motivated me to improve my work ethic. We are preparing works by Prokofiev, Mendelssohn, and Beethoven, and I must say it has been thrilling to work on such profound art. Mr. Greensmith, our coach, chose the pieces-except the Beethoven. Working with him is an incredible experience, for which we are all fortunate.

How long have you been playing with your chamber group?
Since the year started, so since September. My previous teacher always told me that string quartet playing is sort of a brutal path to take, and I never really understood that until I played in one. Playing with a group of people, specifically when there’s no piano, makes rehearsals (and tuning) more tedious. You have to be patient. I’ve learned from working with people so closely that I can be more thoughtful and accommodating. I love chamber performance because my voice is actually heard, sort of like the various bird songs in the morning and
nighttime: the ones that have important calls make themselves heard. Often times the viola has modest, harmonic-functioning lines, but I equally enjoy being the adhesive which binds our group together.

What do you feel like the difference is between being in the Community School and the Music Academy?
In the Academy, it’s all about music. Although everyone has to do academics, that’s not where the focus is. Comparatively, there are people in the Community School that do both, and may have their focus on academics. However, last year I played with a pianist who practices a lot, but then he does all his APs and studies all the time when he’s not practicing. I wouldn’t say all Community School students are as serious. But, joining the Academy helped to narrow my focus towards music, and challenge myself to improve beyond my own expectations.

Has your own focus changed?
Yes, very much so. Especially from being around the other musicians from the Academy and Conservatory. Once I joined, it opened up a whole new part of the school. It was really good for me as a player and a person, because it inspired me to dedicate myself further to music and have better self-discipline.

What do you think of classical music today?
I think that the traditions of classical music need to be better preserved. Nevertheless, if classical music is to survive throughout all of human existence, its presentation to the community needs to adapt to a changing audience. I like to think of the survival of a tradition as similar to an organism. If it cannot adapt to developing surroundings, eventually it will become so antiquated that there is no longer a place for it in the world.

How can we change make sure classical music survives?
The first things I think of involves teaching younger kids and extending classical music’s reach. This can be done by performing in settings outside the seemingly-exclusive standard. As a result, the experience is more approachable to people that may not necessarily enjoy an upscale environment. Moreover, for traditions to stay alive, they must be passed on to the younger generations. Significant resources are needed to educate the majority of kids in America, since they’re not granted much of any classical music education from public school programs. Unsurprisingly, as the federal tax budget presents negligible amounts of funds to art programs. With money, time, and determined individuals, classical music can reach the hearts of underprivileged people: whether it be children, those with mental illness, or the
elderly community. It requires devotion to take the step beyond what is expected of us as musicians to make a difference in other people’s lives. That is truly the purpose of all art: to bring goodness into the world.