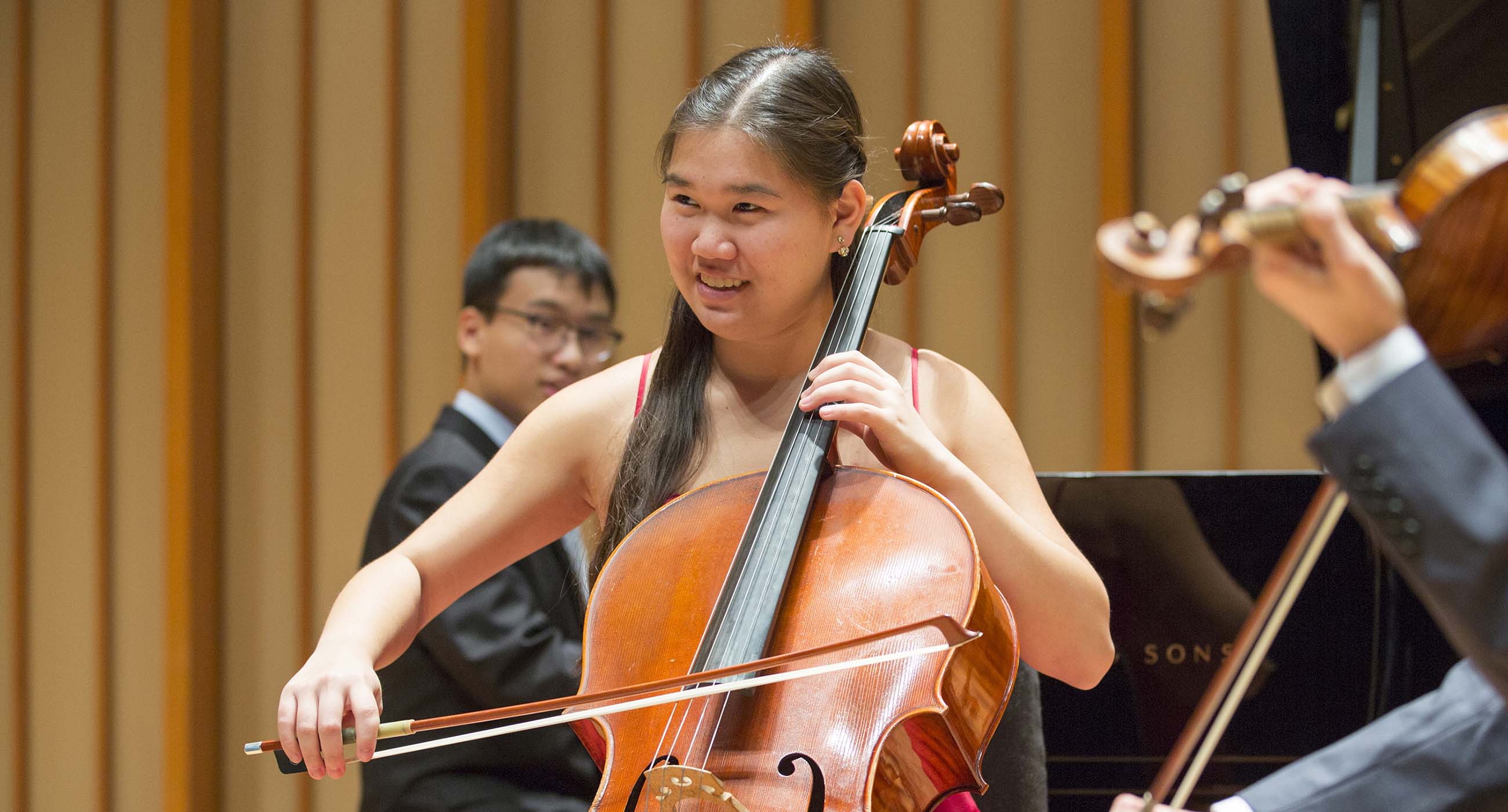 Kristi Kim, 18, currently studies cello with Hans Jensen, and formerly with Ron Leonard. She grew up in Torrance, CA and has been playing cello for 10 years. This is Kristi’s second year in the Music Academy.

What are some things you have been involved with while at Colburn?
I play in the Academy Virtuosi orchestra, and last year I was in the Academy outreach program. We taught elementary school students from the Para Los Niños school and we were each assigned students as a mentor. We gave them lessons every week. Most of them were beginner cello students, so we were teaching them how to hold the bow and where to put their fingers. It was really interesting to be able to pass down my knowledge from so many teachers that I’ve met. I loved watching my students grow and noticing them practice and seeing what I told them come out in their playing. For most of them, this was their first experience with music. All of them were really curious and they were eager to learn. That was fun for me because it was my first teaching experience and it was like introducing what I love to do to somebody else.

What about the Virtuosi orchestra?
That’s a lot of fun because it’s like a huge string quartet, plus double bass. Because there’s no conductor, we really have to listen to each other. I learn a lot, especially from Ms. Batjer, because she really goes into all the details. I think it helps me in my playing even outside of the string orchestra setting, especially in the way I listen.

You used to study with Ron Leonard. How did you feel when you found out that he retired at the end of last semester?
It was really unexpected and I’m still pretty sad. I miss him a lot, but I think I was lucky to have been able to study with him because he’s influenced me in so many different ways. Just watching him, like seeing him perform at school, has been really life changing.

What did you appreciate about his teaching?
I love the way Mr. Leonard goes into really basic things, like technique, intonation, and vibrato, but that he also makes me explore the stuff past that, like how I can make the music special to me and how I can bring out what’s unique about each piece and make it my own.

How is it different studying with your new teacher, Hans Jensen?
He has so much energy. It’s interesting to get a new perspective because Hans teaches by singing. He sings a lot in our lessons, more than playing cello. I think that makes me look for different things in my playing, and to make it sound more like singing. He does technique and studio class so I spend a lot of time in the studio. I’m really inspired when I watch such good players every week, including all the Conservatory students. It’s a huge studio.

How did you get started with music?
I started on the violin and my teacher moved away so my mom, who plays the cello, switched me to cello. I didn’t really like it too much until I was 12 and I played in the Piatigorsky Festival at Walt Disney Concert Hall in the mass cello ensemble with 100 cellists. I think that’s when I really started to take the cello seriously and truly love playing the cello.

What are some ways you think classical music can be more accessible?
In music history last month, we learned about Beethoven, and the teacher talked about the Heiligenstadt Testament, which is the letter Beethoven wrote to his brothers when he was becoming deaf. I feel like after learning that, the whole class was able to think more deeply about Beethoven’s music and what it really means and how he must have been feeling.

If you put small facts like that that catch the audience’s attention in program notes, it makes them listen more carefully and with a different understanding of the music. Because I know the story behind it, it makes me think much more beyond the notes and each phrase, and think about how Beethoven was feeling and what he intended to write.

What are your plans for college next year?
I’m applying to a mix of universities and conservatories. The environments are so different. At universities, you get a wider spectrum of ideas and at a conservatory, everyone’s just doing music all the time. I feel like that’s so much fun because I love music, and everyone else there loves music, so there would be lot of opportunities to play chamber music. We would always be inspired by each other and support each other. I’m probably going to end up choosing to go to a conservatory.