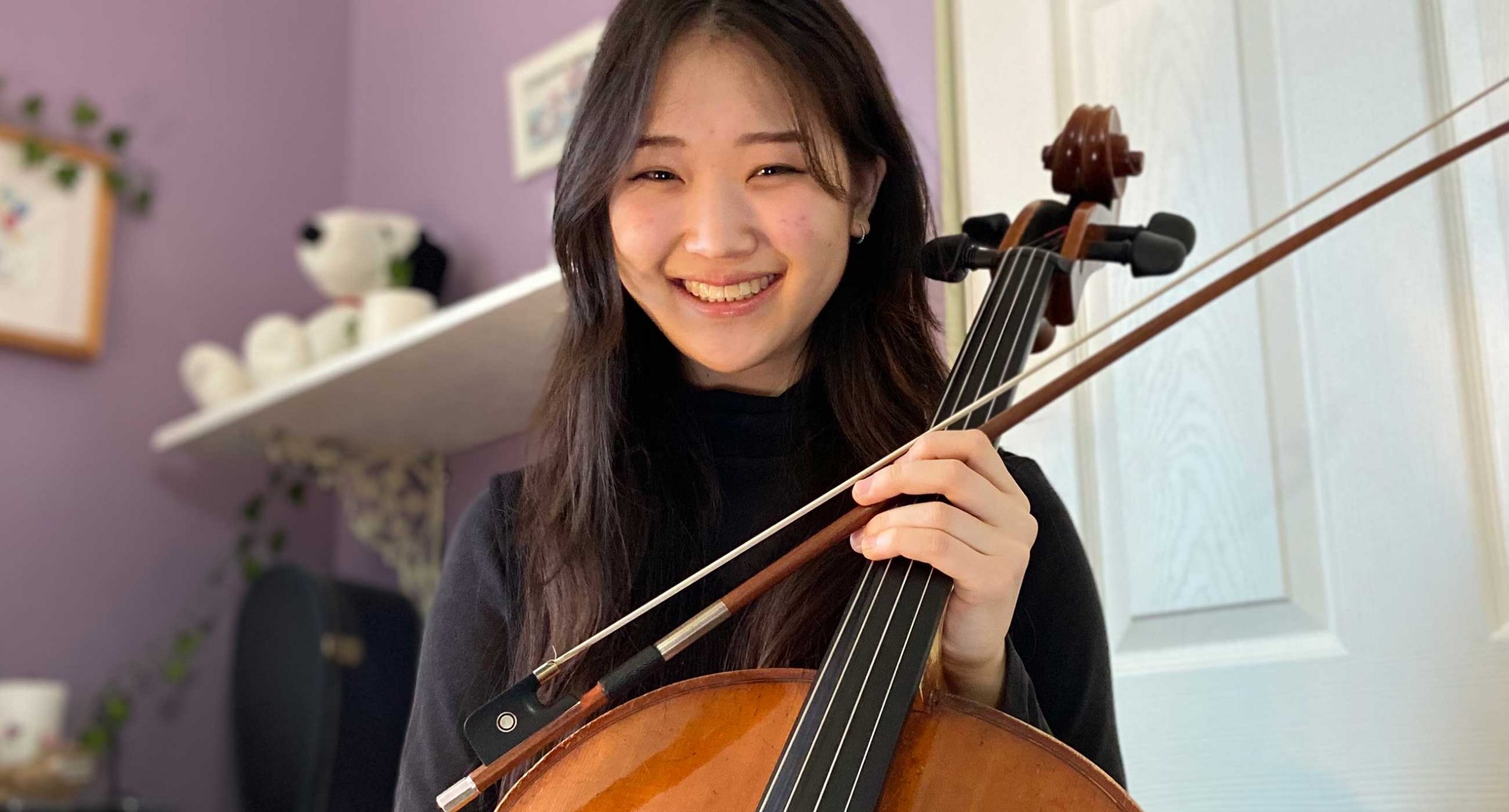 Mei Hotta, 18, studies cello with Clive Greensmith in the Music Academy. A former Community School student of Sarah Koo, Mei has been at Colburn for seven years.

How did you start playing the cello?
My brother played the violin. When I was little, I used to want to do everything my brother was doing. So I also wanted to start the violin at age 3, but it wasn’t a good match for me, and I was not really ready to take any formal lessons.

My mom was watching Yo-Yo Ma’s YouTube videos, and I was excited about how the instrument was way bigger than the violin. That’s why I started the cello at four. Then I slowly fell in love with the sound.

How did you start studying at Colburn?
When I was in fifth grade, I saw older students in the studio playing chamber music, and I wanted to start it, too. I asked my then-teacher, Sarah Koo.  She had a few students who were enrolled in the [Ed and Mari Edelman Chamber Music Institute] program at Colburn and seemed to enjoy it a lot. So I applied for an audition.

What did you learn from the Chamber Music Institute?
I had zero experience with chamber, so it was really something brand new to me. I started off with piano trio with amazing coaches, Jennie Jung and Varty Manouelian. I learned a lot of communication skills with my colleagues. I learned how to cooperate with others to make music together.

What else did you participate in during your time in the Community School?
I did a few Honors Recitals and I got to meet other talented performers in the backstage and at receptions. That was really fun, especially because I got to play at Zipper Hall. It’s such a huge hall and it sounds amazing, so that was really exciting. I also got to perform at LACMA a couple times for KUSC’s radio show.

I was in an honor program, which gave me a lot of opportunities such as master classes. Last year, before the pandemic broke out, I got to play for Sheku Kanneh-Mason in a master class.  I also had an opportunity to get chamber music coachings from renowned musicians such as David Finckel and Peter Wiley.

Now you’re a Music Academy student studying with Clive Greensmith. How have your lessons with him been?
I had expected to study with him in-person obviously, but virtual lessons are actually not as bad as I had thought would be. Over time, I think we both got used to [the technology challenges]. His teachings are still amazing nevertheless. And I’ve been learning a lot. We’ve been going through a lot of musical ideas and he gave me a lot of tips about technique and just overall developing parts of that needed a little bit more work. But I really wish to get back in-person soon.

What’s been special about the Music Academy this past year?
The Academy has a lot of communication classes. There are seminars where we learn about development of communication with the audience. Sometimes we had a drama teacher come and she would teach us to open up and be freer. It helps to bring that into our music and playing. So there’s definitely a lot of trying to open ourselves up.

You were just accepted into the Conservatory. What made you decide to come back for undergrad?
The number one thing is Mr. Greensmith.  He’s just an amazing teacher. Over this year, even if it was all through virtual and through Zoom, I felt that I really wanted to continue studying with him. Especially since I only got to study with him for one year, I wanted to continue studying with him. Another thing is the level of his studio. I have attended his studio class for a year and have been so inspired by everyone.

Also, the number of opportunities to perform. I didn’t have that many before joining Colburn.

When did you decide that you wanted to pursue music professionally?
It was a decision made over time. I have had experiences of performing for many people, including private intimate occasions, and the reactions that I got from them was something that I never experienced if not for music.

I learned that music could touch people’s hearts.  Music is really a form of therapy. I really enjoy communicating with the audience through music. And so I felt I wanted to keep on doing that and trying to help other people.

Do you have any plans for what you want your musical career to look like?
I think I’m still deciding on that. It’s hard to decide on one thing because I like doing a lot of different things with music. Like I said, I want to be able to collaborate with other musicians.

I want to be a performer, but I think I really love chamber music, so I hope to continue that and also maybe some orchestra. So I’m still deciding, but I want to try to do a lot of different things with music.

I wish that when people listen to me perform that they can be open to themselves. I want to be able to have a connection between me and the audience. Whatever I feel when I listen to music, that’s what I want the audience to also feel.

What kinds of music do you like to play the most?
Well, I’ve experienced a lot of different genres over the years. My main focus at least for now is obviously classical music. But I’ve also had the opportunity to collaborate with other genres.

Also, since I was nine, I have collaborated with a performing artist. It’s a duo, in which I play the cello and the artist expresses with movements and live installation. I want to do more collaborations with different mediums of art.