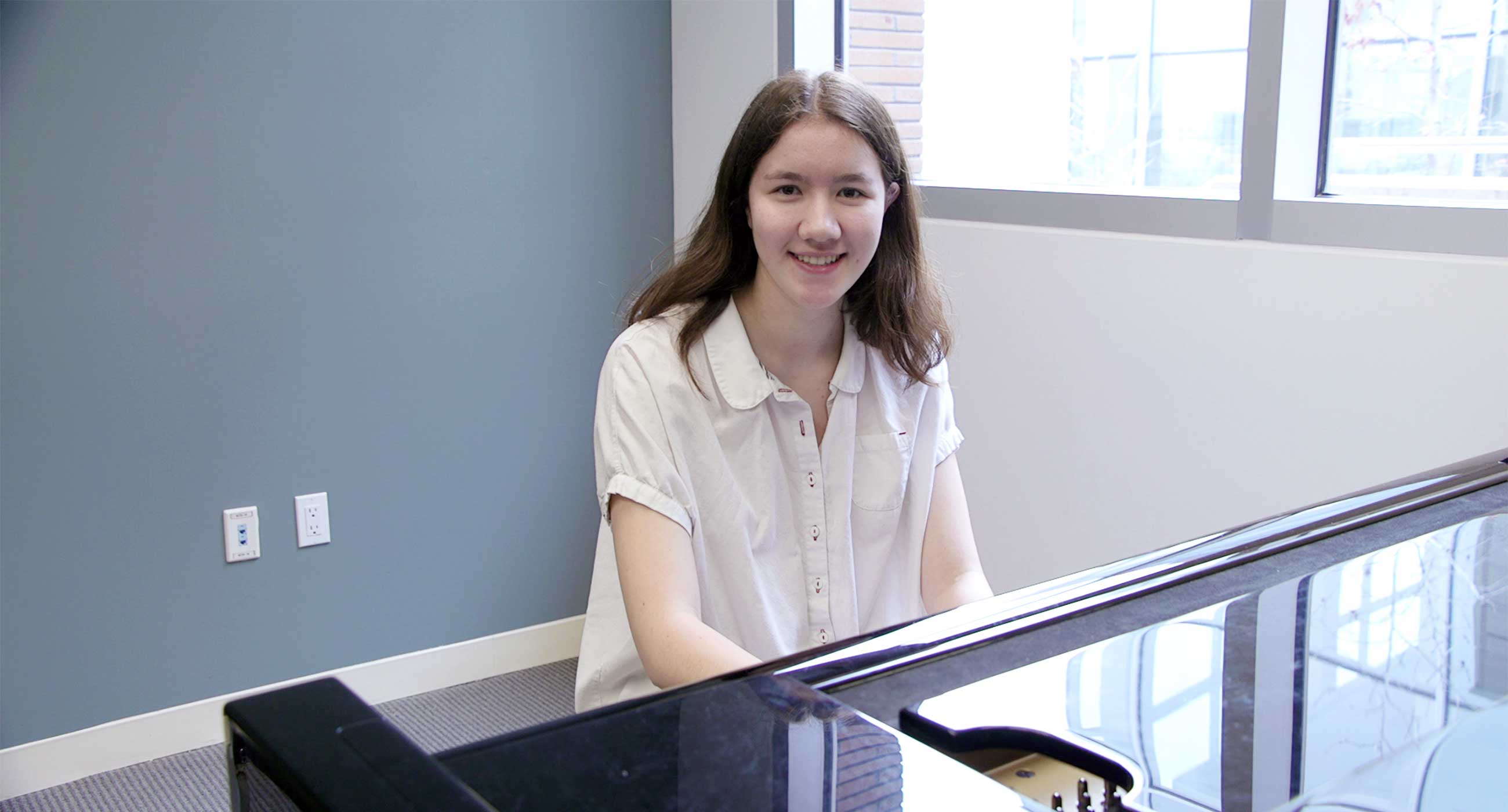 Milli McFall, 17, has been playing piano since the age of three. This is her second year studying with Ory Shihor in the Music Academy. Milli is from Seattle, WA.

This interview has been lightly edited for style and content.

What is it about Mr. Shihor’s teaching that you appreciate?
I’ve never had a teacher like him. He wants you to be an independent musician. It motivates me to work hard. Of course, you want to be a little bit scared of your teacher—it’s not necessarily fear, but it’s fear because I don’t want to disappoint him. He pushes me and he’s never mean, even if I did not play well. He’ll tell me, of course, but he’s also really supportive. I really love that.

He can also literally play anything, even when he sight-reads. He just plays it so well. You’re studying with this music icon, it’s so cool. Since studying with him, I’ve also become interested in Classical classical music. I was just into Romantic and modern, and I was like Baroque, ugh, Classical is boring. His teaching with it has really piqued my interest. Like actually it’s not boring, I just wasn’t playing it well. Hearing his concerts helped. He did a concert recently of Schubert’s music. I was never really interested in Schubert but after hearing him play, I was like, I want to play Schubert!

When did you decide that you wanted to pursue music?
Probably 2nd grade, I’m not joking. I was definitely always interested in going to a pre-college program for music. Coming from a family of musicians, it was natural. My mom and my sister and I are all pianists.

What is it like being from a musical family?
My mom taught me until I was seven and then I switched teachers because I became rebellious quite young. My sister was always playing piano and my mom is a teacher too, and I think that helped because there was always music going on in the house. The music would stop at 11 pm and start again at 5 am. It was all day every day.

What’s your favorite thing about Colburn?
Oh, there’s so many. I think my favorite thing about coming here is seeing myself grow as a musician; my technique has gotten a lot better. When I first came here, I would have never voluntarily, willingly, or happily played an étude, because that was my biggest nightmare. But for my conservatory auditions, I’ve been starting with my étude. That’s something that I’m proud of and that I can say this place gave me.

The whole environment here is so supportive. Everyone here is really here for the students. The teachers in all the classes really promote self-thinking instead of institutionalized thinking. They all have an independent teaching style, especially Mr. Shihor.

What was your most memorable experience here?
It was definitely playing for Thibaudet in the master class last year. That was my coming of age moment. Even though I’ve known I wanted to do music my entire life, I had a lot of questions about it before coming here. I had to ask myself if this was something that really satisfies me, because there are so many sacrifices you have to make. You really have to believe that it’s worth it, otherwise you’re not going to put your whole heart into it. There’s also a lot of pressure because my family’s all musicians, so I also came here to figure out if this was something I wanted for myself.

It was playing for Thibaudet—that moment on stage—where I thought, I love this for myself; it isn’t just because of the pressures from my family. This is something that I really enjoy doing. It was such an honor to play with him, especially in Zipper Hall. I was like, this is my life. This is real. It’s not just some fantasy.

What are some of your interests outside music?
I swim, and I’m also into activism. Being in downtown is so great because there are so many events and protests here. That’s also one of my favorite things about being here. It has made me a lot more aware, being in such a diverse place that’s super dense, with events that draw people from all over the world.

How do you combine music with activism?
I think it gives you a platform to voice your opinion. Everyone has a voice and everyone, in my opinion, should use their voice. Even choosing not to use your voice is using your voice in a way. I’m a firm believer that especially now, politics and music, or any type of art, are really related to each other. As musicians, we should use the power of our music and voice to speak out against discrimination. World-class musicians especially just have so many followers, so they have a huge voice and can make a huge impact. I think it’s kind of shameful when they choose not to do that, but to each their own.

What’s something you’ve learned from Colburn that you’ll take into the future?
The importance of networking, that’s huge. I can really see it here because Colburn is so connected to the local community, with their students and their outreach program. Colburn is so amazing at making all these connections and because of that, we have so many more opportunities as students to do things that many other schools can’t offer. Making connections is so key. These are people can help you in the future, or that you can help or make music with. You just never know when a connection is going to be helpful.

Also, the importance of practicing. Before I was always like, ‘Okay so if I practice this way, then I’ll practice less, and that’s a shortcut.’ But Colburn has taught me that no there are no shortcuts if you want to play really well. You really have to just sit at the piano and stay there.

What are some goals you have for the next four years and beyond?
I would like to be the best musician that I can be. Ideally, I would like to be a world-class musician. It’s very difficult, but we’ll see. I definitely want to compose at some point, play more jazz, and find more collaborative work. I also want to perform more underperformed music. There’s so much amazing music by women like Clara Schumann and Fanny Mendelssohn that’s just never played. I’d like to bring exposure to that.