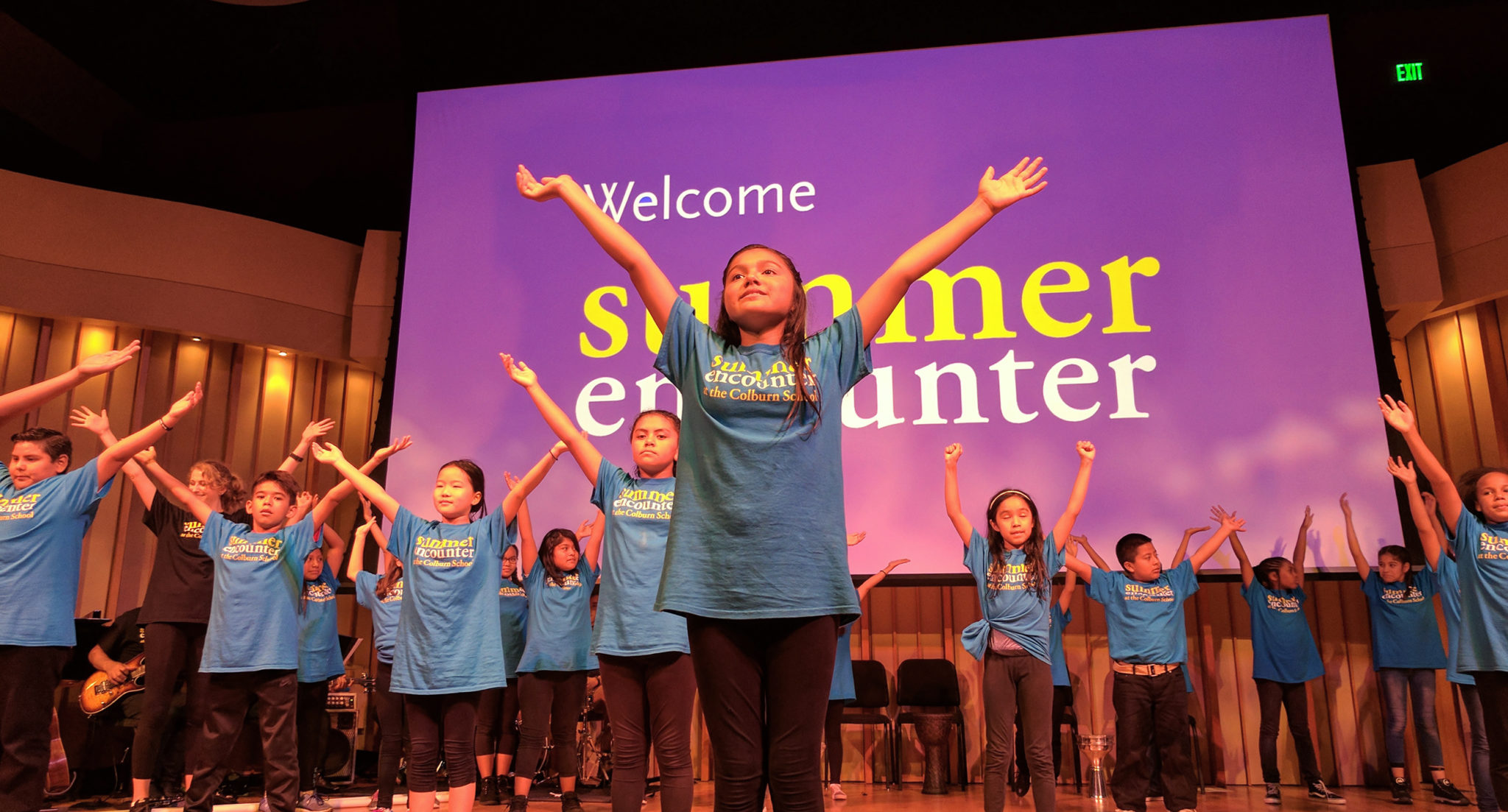 Arts education empowers young people by equipping them with the necessary tools for creative expression, which enables them to have a voice in our society. Jazmín Morales

On the morning of the Summer Encounter finale performance, excitement is high. For many of the 60 fourth and fifth grade campers, this is their first time performing music on stage. But after two weeks of intense arts immersion in classes including voice, guitar, percussion, and dance, they are ready—nervous, but ready.

In a hurried interview in the counselor’s break room before rushing off to another class, counselor Esmeralda Rangel remarks that 60 strangers—the campers—working together with 20 older strangers—the counselors—to put on an elaborate, choreographed performance after just ten days seems impossible. “I find it just amazing that in those two short weeks, when a lot of the kids had never even held these instruments before, they are able to do this big performance that they’re really proud of.”

For many of the campers, Summer Encounter is their first foray into arts education. Campers come from our 15 LAUSD partner schools, which are some of the district’s most underserved schools on the arts equity index; most are also recipients of Title I funding.

It is because of these disadvantages that students are ready to learn about resilience, the theme of this year’s camp. “Learning and perfecting an art form is all about trial and error, about failing and getting right back up to try again. Arts education empowers young people by equipping them with the necessary tools for creative expression, which enables them to have a voice in our society,” said Jazmín Morales, Coordinator of Community Engagement, who planned this year’s camp.

Resilience was on display throughout the two weeks not just by campers, but also by counselors. “We stay long nights,” counselor Lindsay Chu explains. “I was talking to the campers today and they asked me, ‘Where are you at night?’ And I told them, ‘We’re here; we live here.’”

“Now that I’m a counselor, I get to see that there’s so much effort coming in from these people that I didn’t appreciate before, all these nights practicing and all the cooperation with people that we barely knew last week,” agrees Esmeralda, who was a Summer Encounter camper herself five years ago.

Bryan, like the campers, is new to both Summer Encounter and Colburn. “It’s not all fun and games, but I think it’s worth it, especially listening to the other counselors’ passionate stories about how much their counselors influenced them when they were campers. That made me think that I want to do that for these kids too, because a lot of them really are troubled. I know how it feels going through these tough times, and I know that there needs to be someone there for them. I think that’s what this program does for them, and that’s why I want to come back.”

“Although the kids have all these stories of their backgrounds and hardships at home, they come here and show that smile and persevere through every class,” Esmeralda adds. “And it’s amazing to see how their confidence grows over two weeks. They’ve soaked up so much that they’re different people at the end of camp.”

For some campers, this is just the beginning of the road. Come fall, they’ll spend five days after school on campus in the Jumpstart Young Musicians Program, getting private instruction with one instrument and playing in the Jumpstart Band.

For now, though, the end of Summer Encounter means bittersweet goodbyes. When it’s time to go home after the performance, campers and counselors alike are in tears. One camper cries, “I wish this lasted for a month!”