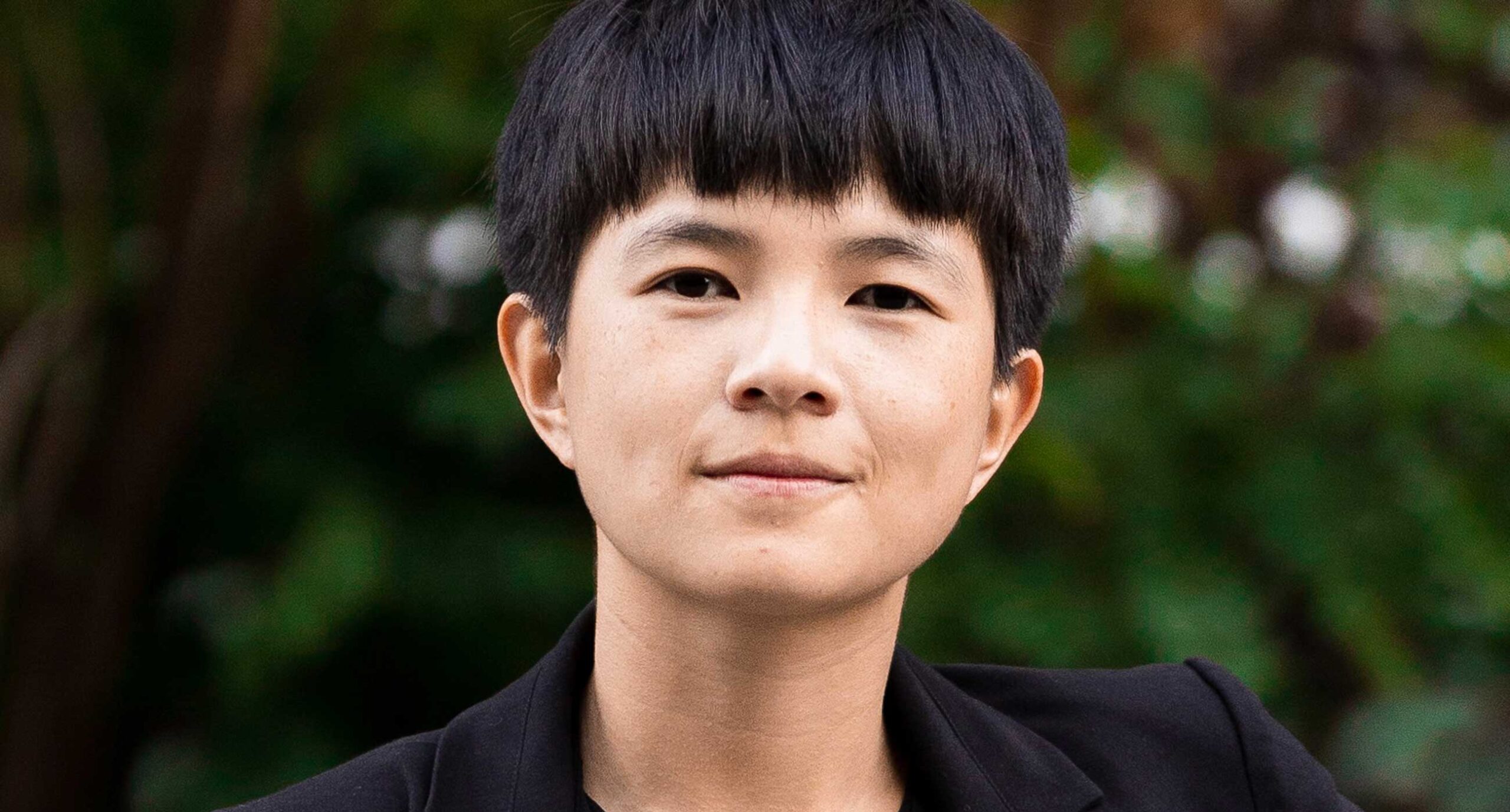 In her first semester in the Negaunee Conducting Program, Molly has worked with the Colburn Orchestra, the Colburn Contemporary Ensemble, and orchestras in San Francisco and Paris.

We caught up with Molly Turner after her first semester in the Conservatory of Music’s Negaunee Conducting Program to discuss her musical journey so far, her passion for contemporary music, and what she’s learned from assisting and covering for Esa-Pekka Salonen.

The Negaunee Conducting Program is made possible by the generous support of the Negaunee Foundation. Under the direction of renowned conductor Esa-Pekka Salonen, a select group of pre-professional conductors come to Colburn each year as the School’s Salonen Fellows in the Negaunee Conducting Program. Beyond their performance opportunities with Colburn, the Fellows’ robust activities with Maestro Salonen is a unique aspect of studying at the Colburn School. The Foundation provides for the tuition, room, and board of each Salonen Fellow, as well as their travel expenses so they can accompany Maestro Salonen on his professional conducting engagements, prepare the orchestras he conducts, and often perform on stage nationally and internationally.

In addition, the Colburn School is proud to host a Lab Orchestra, supported by Anne Akiko Meyers and Jason Subotky, in honor of James DePreist. The Lab Orchestra provides special opportunities for the Salonen Fellows to learn and prepare repertoire that may not be on the main stage in a given season, and for the Conservatory and Music Academy students to work with the Salonen Fellows throughout the year.

To learn more about how you can support these exceptional programs, contact advancement@colburnschool.edu.

Tell us about your musical background, including how you got into conducting.
I grew up playing violin and piano. In high school, I gravitated towards composition. I was really drawn to improvisation and just making music up in the now. So I studied composition first and then I realized composition was kind of lonely and it wasn’t something that I wanted to pursue through a terminal academic degree. So later in my undergrad, I explored conducting. I was really lucky to be at a place where I could watch inspirational orchestra rehearsals led by Larry Rachleff at Rice.

For me, composing is having a core musical intention in your head and then writing it down and then getting it performed. But conducting is walking that road backwards and talking about how we perform works and how we rehearse and then taking a step back into what the composer thought. As a conductor, we take steps back into what a composer’s core musical intention was. So, they go hand in hand for me. They’re incredibly related. It always helps to be a composer that conducts their own works as well.

How did you come to be a part of the Negaunee Conducting Program at Colburn?
I first auditioned in 2019, the first year Colburn hosted auditions. Although there wasn’t room in the program that year, after finishing my masters at Juilliard, there was an opening! It’s a very young program so it’s exciting to be a part of it as it takes shape.

This is your first year in the program. How is it going so far?
It’s going really well. I am originally from Seattle, so I’m happy to be back on the West Coast. I have never lived in California, and I am thoroughly enjoying the weather and everything that Los Angeles has to offer.

My program itself is extraordinarily flexible, which is probably the biggest positive. We don’t take classes and we travel quite a bit. It feels a lot more like a fellowship or assistantship rather than getting a degree at a school.

It’s been great getting to know Esa-Pekka Salonen and my two new colleagues, Ross [Jamie Collins] and Kyle [Dickson]. They’re awesome. We’re all so different and I think we benefit from this a lot. We’re all different ages and we have very different backgrounds which is great.

What have you done so far in the program?
A substantial element is cover conducting and assistant conducting for Esa-Pekka. I spent two separate weeks in San Francisco, and then he was here in Los Angeles doing a performance with the Colburn Orchestra where all three of us worked with him. We also did a lab orchestra session with him, which covered Berlioz Symphonie Fantastique.

And then in the beginning of December, I was in Paris with the Orchestra de Paris for two weeks, which he regularly guest conducts. For me, it was great to see how different orchestras work. I haven’t done much work abroad or seen many [non-US] orchestras perform or rehearse. Just to see the culture, the sound, the audiences, and the music they play is something you can’t really learn in school. Experiences like this really get us out of the “student conductor mindset.”

One of my goals for this year with Colburn and Salonen is to improve the contemporary music scene at Colburn. I think that’s a huge entry point because I’m a composer and Salonen is also a composer.

How is it working with Esa-Pekka Salonen?
He’s very attentive and thoughtful and maintains this through his extremely busy schedule. He trusts the orchestra an immense amount and he shows that in his teaching. He doesn’t really like if you click [the baton] or if your movements are too jerky and whatnot because that doesn’t really help the orchestra.

He trusts at arrivals that the orchestra will come together. He believes that orchestras have this innate ability to play together and we should trust that. So, it’s not really our job to put the things down in a vertical way all the time. And you can really see it in his conducting which has this beautiful flow and freedom to it. It’s been great to watch him so much because I learn a lot by watching.

There’s this thing among young conductors where it’s difficult to learn at lessons on the podium. It’s really hard to implement new gestures and new things right on the spot. You see, we don’t get to practice our “instrument” very much. A violinist can redo that run 100 times, but we can’t really give a downbeat 100 times in front of an orchestra.

And so most of our learning is actually by watching. So just seeing what he does with a huge variety of repertoire has been the one of the biggest contributions to my learning.

Covering often goes with assisting and simply means covering the concert. So that means being prepared to conduct the entire program at a moment’s notice and that could even mean a rehearsal. It can sometimes be difficult to prepare scores where there’s only a chance you’ll conduct, but that’s the job! That’s how a lot of young conductors, including Esa-Pekka Salonen, have gotten important debuts.

Assisting is something that you don’t really learn in school. You’re not really looking at the whiteboard, learning how to assist and cover. It’s a very flexible thing. They might ask you to tell a note to the clarinet player or stand in a different part of the hall. Sometimes you’re involved in approving recordings of concerts and working with recording teams after the concert.

It’s been great. I prepared the orchestra for Bruckner 6 and then Kyle did the Shostakovich Violin Concerto. And it’s cool because a first rehearsal’s honestly sometimes the hardest work that you have to get done as a conductor. You have to orient musicians on how the piece goes and you can’t really get into the kind of metaphor and color-oriented language yet.

As the prep conductor you have to be prepared to explain tricky transitions in an efficient way. You want everyone to be really comfortable for when the guest conductor comes in.

How do you prepare for that?
Everyone has their own score study preparation process. For me, it’s a mix of playing the score at the piano and listening to recordings. There’s of course so much to consider alongside that: historical background, other pieces by that composer, tempo maps, harmony, form, etc. Ideally before I listen to recordings, I can look at the score and hear it exactly in my head, the precise kind of sound that I want. It reminds me a lot of composing—having to hear sounds in your head in the abstract without an orchestra.

You’ll be preparing the Colburn Orchestra for their upcoming concert on January 23. What’s on the program?
It’s a Coleridge-Taylor piece called Ballade that he wrote when he was 23. It’s a very young, kind of gutsy, dramatic, fun opener, and then Shostakovich 9, which is one of his shorter symphonies. It’s about 30 minutes and it’s very satirical. That one’s going to be super fun. It features the woodwinds quite a bit and Yehuda Gilad is the conductor.

The second half is the Brahms Double Concerto, which is an extraordinary piece. It’s essentially a symphony in terms of its proportions and Charlotte and Olivia Marckx are the soloists.

What are you looking forward to for that concert?
It’s a very diverse program. So Coleridge-Taylor is English and then Shostakovich is Russian and then there’s of course Brahms representing the German speaking world. I think it’ll be interesting to really lean into each of those different “musical dialects” through each of the three pieces.

What’s coming up for you the rest of the semester?
I am covering a week in San Diego at the end of February and then the Salonen Fellows are going to do something with the Colburn Contemporary Ensemble. And then the three of us are doing the Gala concert, and I’ll be performing one piece at the Academy Virtuosi concert. Academy Virtuosi is traditionally a conductorless group, but they occasionally program more contemporary works that will need a conductor.

I’m also hoping to write a little bit more music this semester. The first semester I was still sorting myself out and traveling a bit but now I think I’ve got the flow of things.

Where do you envision your career going after finishing the Conducting Fellows program?
It’s really hard to tell. I’ve always had a strong interest in moving to Europe. But really any career that includes both contemporary music and symphonic music would be amazing. For example, a dream job would be anything involved with the Ensemble Intercontemporain or an ensemble like that. It would be great to mix that in with symphonic performances.

What do you hope to achieve with your music?
Perhaps it’s less about what music achieves than what it contains. Gustav Mahler once said, “A symphony must be like the world. It must contain everything.” It’s incredible how multidimensional music is. It expresses history, architecture, nature, story-telling, math, psychology, virtuosity, languages, and on and on. The purpose of my music-making is to tease out the specific corner of the cultural fabric that a given piece expresses and to bring that to the forefront of the audience’s experience.