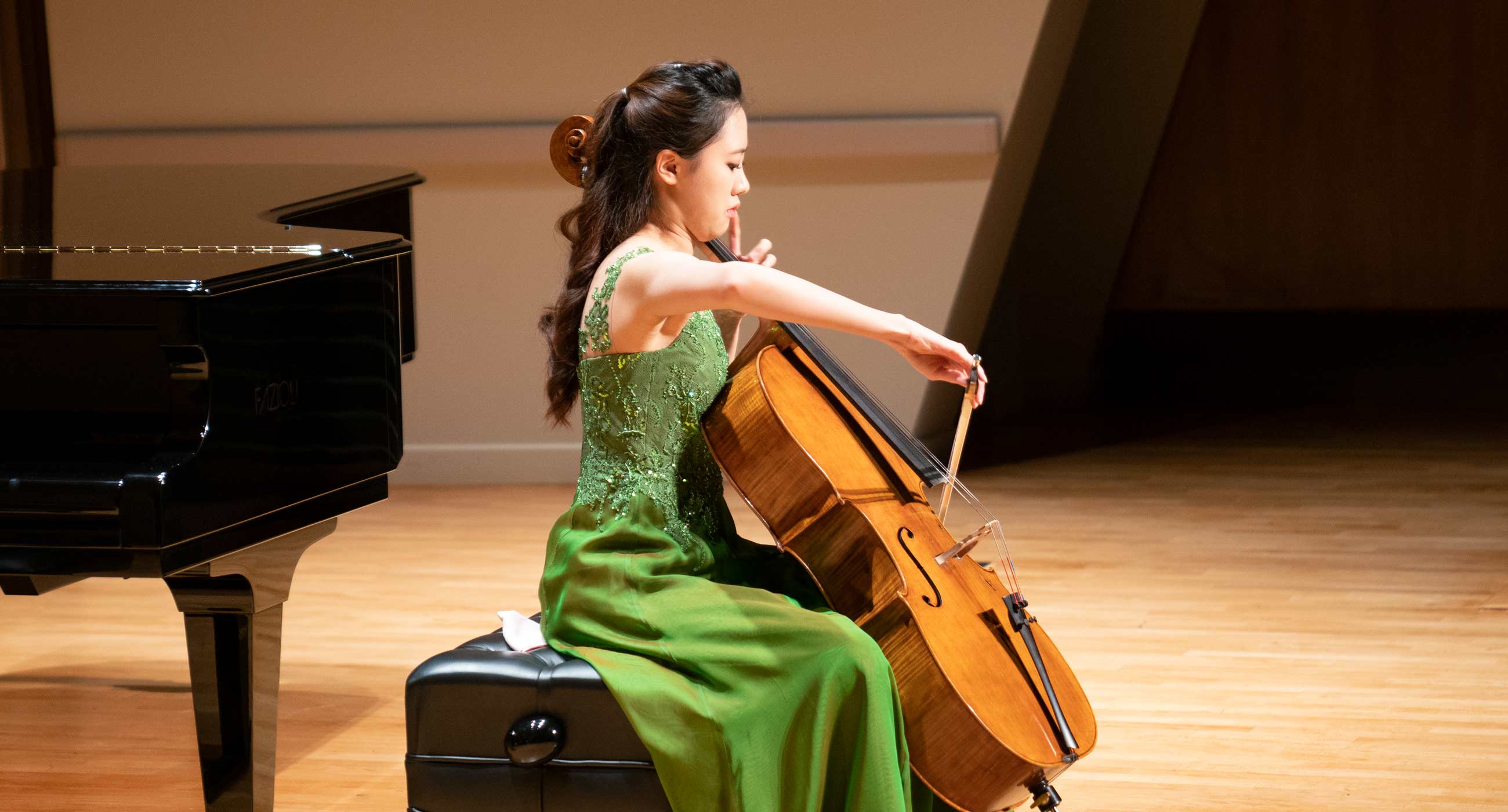 Most cellists would agree that Schumann’s Cello Concerto is notoriously difficult. With its dramatic melodies and technical demands, the concerto can be daunting even for professional musicians. For sophomore Sanga Yang, who won last year’s Conservatory Concerto Competition with the piece, taking on the challenge will give her a chance to improve her artistry while on her path toward a solo career.

As the 2019 Concerto Competition winner, Sanga will perform the Schumann Cello Concerto with the Colburn Orchestra on September 21 under the baton of guest conductor James Conlon. “I didn’t expect to win because last year was my freshman year,” stated Sanga. “I’m really honored to do this and meet Mr. Conlon.”

The 20-minute piece is comprised of three movements performed attacca, which makes performing it a feat in stamina and concentration. The first movement features shifting moods, with a melody “reminiscent of a sad monologue that in some ways feels like a dream,” as Sanga described. The second movement has a gentle and touching melody, and the third movement is filled with colorful techniques and a lively conversation between cello and orchestra. After a short cadenza, the work wraps up with a cheerful melody alongside the orchestra.

Written in 1850, the historically misunderstood Cello Concerto was the final work Schumann wrote before he was committed to an asylum. The piece was deeply personal for the composer, who suffered from mental illness. Much of the concerto’s difficulty lies with expressing that emotion and connecting with the audience. “It’s sometimes hard for the performer to capture the musical elements in late Schumann successfully in a way that the audience will go with them,” explained cello faculty Clive Greensmith, Sanga’s professor.

Reminiscent of chamber music, the concerto requires communication not only with the audience, but also among the soloist and orchestral players. Therefore, it was crucial for Sanga to learn each part in the score, not just her own. This helped her understand the work holistically so that she could better collaborate with her colleagues in the orchestra. For example, in the piece’s second movement, she shares a dialogue with the principal cellist, where the pair performs the roles of Robert and Clara Schumann.

Robert included messages to his wife, known as the Clara motif, in this concerto and many other of his pieces. Understanding the symbolism and emotional content behind his musical love notes was another important facet of Sanga’s preparation.

For even more historical context, Mr. Greensmith taught her about other pieces that Schumann wrote during that period, especially his lieder. Most of Schumann’s music can be explained in relation to his songs, so to successfully convey the lyricism in the Cello Concerto, Sanga had to be fluent in the vocal qualities of the music.

“As a human being, as an artist, this is a piece that helps you become more sensitive and more deeply aware of the emotional content of the music,” Mr. Greensmith shared. “It separates artists from mere technicians, the Schumann Cello Concerto.”

Although it can be nerve-wracking to perform such a demanding piece, Sanga was able to quell her fears of the stage by performing in studio classes and on the weekly Performance Forum series for Conservatory students.

After September’s concert, Sanga will continue working towards her dream of becoming a soloist by competing in the Schoenfeld International String Competition next spring. “Music has become everything to me, and I can’t imagine taking it away from my life.”

Hear Sanga with the Colburn Orchestra on September 21 at Ambassador Auditorium. Get your tickets today.