Speaking Through Music: Grace Rosewood Finds Her Voice Through the Arts 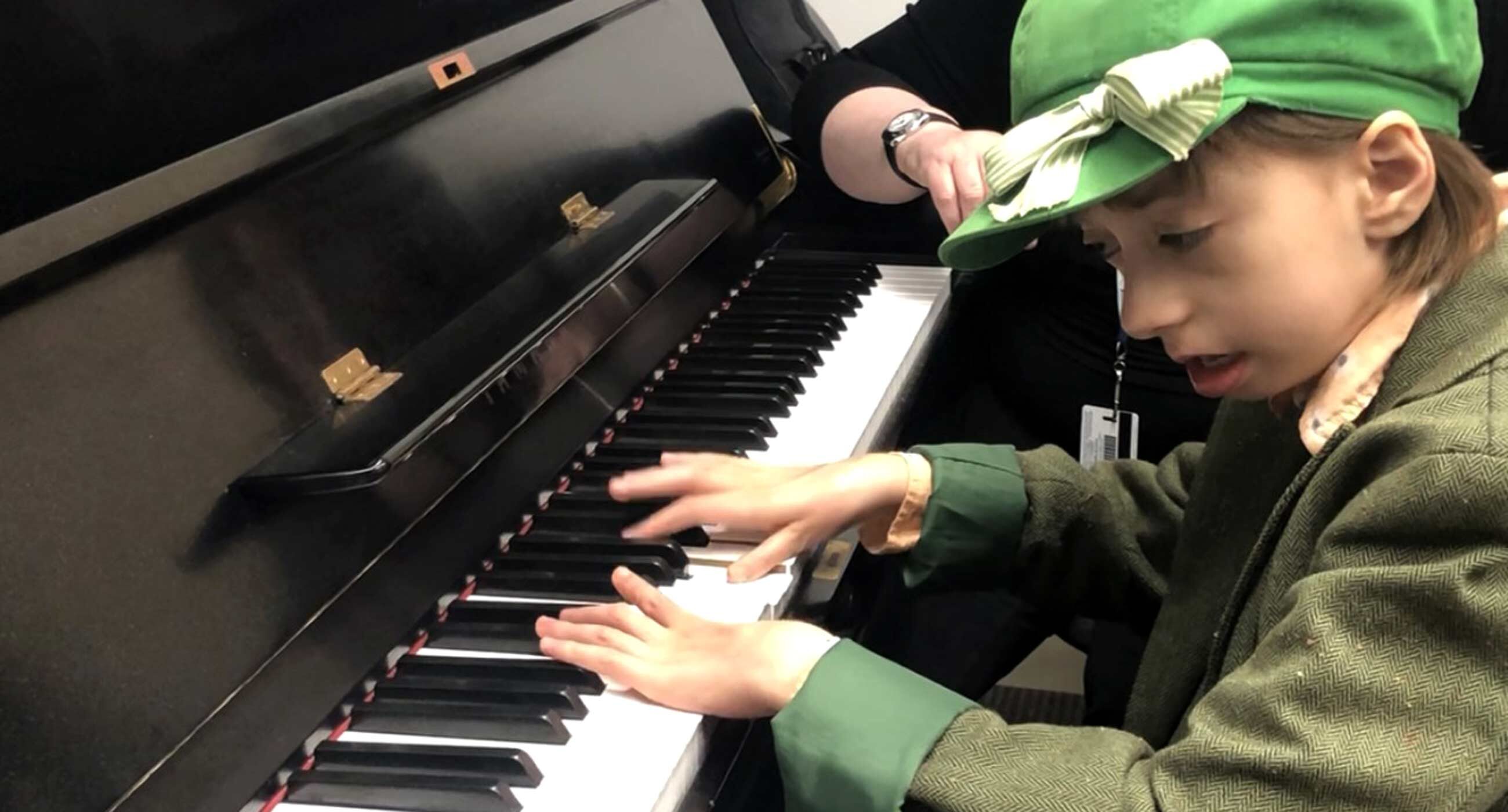 Through the Adaptive Music Program, Grace Rosewood has overcome obstacles and experienced the joy of the performing arts.

While the arts are universal, students with special needs face significant barriers to access arts education. Colburn parent Olivia Rosewood shared how Colburn has opened the door to her daughter Grace to experience the performing arts through the Adaptive Music Program. This program provides students the opportunity to express themselves musically, interact, and learn to play a musical instrument in a therapeutic environment. A structured music-based assessment is provided, including assessment of motor skills, behavioral, social, emotional levels, attention and communication ability.

How long have you been at Colburn?
My husband was performing as a dancer for the LA Opera nearly across the street from Colburn, and we were both thrilled to see a serious conservatory arts education available for young artists in Los Angeles. He was educated at Los Angeles County High School for the Arts, and I attended Interlochen Arts Academy and University of Southern California in a BFA program. The arts are a central part of our lives, and naturally, we wanted this for our children as well.

We began at Colburn with our older daughter, Ava Dhira. She is now in the ballet/dance department, but she began in the early childhood classes. Her sister, Grace, was born a few years after her. Initially, Grace tagged along as an infant spectator. We enrolled her in early childhood classes as soon as she was old enough. If my math is correct, we have enjoyed Colburn going back more than 12 years. However, there was a period during which we weren’t enrolled.

After Grace’s diagnosis, we were dropped from our insurance, and we were denied any coverage based on her pre-existing condition. Being independent contractors/artists, we simply paid out of pocket for massive medical expenses until we lost everything, including our home, in medical bankruptcy about a decade ago. It’s not uncommon for special needs families to endure this kind of challenge in the United States.

We have been able to rebuild our livelihoods and have been back at Colburn with both of our girls full time for the past two years.

How has the Adaptive Music Program impacted Grace’s life?
Grace has a diagnosis of cerebral palsy (CP). Most people don’t know what cerebral palsy is. In brief, it is simply a brain injury that occurs in the womb or in the first few years of life. It can come from a stroke or other medical complications that inhibit flow of blood to the brain long enough to incur damage. CP affects each person differently. Some may be in a wheelchair with full intellectual ability, some may have crutches, some are only impacted intellectually. The limitation varies and is considered permanent, although improvable, because the damage to the brain occurred before ability was developed.

Grace is without speech, and her other abilities are also impacted by her challenge. She has global partial paralysis, also called quadriplegia, along with other issues, all related to the chief diagnosis of cerebral palsy.

The little ability she does have has vastly improved because of her desire to play the piano and her deep love of music.

Grace seems to be most fully alive and able to express herself through music. While in the hospital with her as an infant, we noticed that she would be unresponsive to human beings and seemingly lost in a distant gaze unless we played classical music at her bedside. We discovered she would not engage with spoken words, but she would respond to words if we sang them. From very early on, it was clear music would be a way to reach Grace’s spirit unlike any other.

However, finding a way to connect her with music proved to be extremely difficult. As she has grown into a lovely young woman, ways for her to “fit in” with traditional music education have been few and far between. Fortunately, we discovered the Adapted Music Program at Colburn.

A young man named William [Community School Marketing and Program Specialist Will Brooks] was handing out flyers at a Colburn street festival, and I explained Grace’s situation. Thankfully, my eyes were opened to this possibility. It’s truly spectacular to see Grace come alive in front of the piano.

Every waking minute of her life contains more challenge than most of us will endure in our lifetime. She has learned to embrace the challenge of trying to move in her weakened body, from getting out of bed in the morning to traversing a playground. She struggles to communicate even the simplest of her needs using an iPad with an assistive communication app. Even chewing food can be a nearly insurmountable and life-threatening task. The normal day-to-day experience of life most of us take for granted and have perhaps converted into the humdrum normalcy of existence, are incredibly difficult for Grace.

And so, to see her face light up with the biggest smile of her life, her eyes sparkling with joy, her very soul dazzled by the magic of music is extraordinary. She seems most fully herself through music, and it seems to be the way in which she can most fully be her untethered self.

What has your experience been like working with Francesca Bori?
Grace first encountered Ms. Bori during an early childhood education class led by Christine Martin. I remember Grace was in my lap, and Ms. Bori came to play her cello for the group. Before our eyes, this normal human being transformed into an instrument of her music as both she and her cello took the shape of the song they played together. Grace, we now know, was totally blind at the time. However, she was transfixed by the vibration and magic of this moment.

What Ms. Bori and Grace seem to share is the inherent language of music. Grace, for whom communication is typically a profound challenge, has always understood Ms. Bori completely. They will often dialogue through musical exchange on the keyboard. Because of Ms. Bori’s profound gift and ability, the absence of spoken language doesn’t hinder her ability to understand Grace. Perhaps this is why Grace is so enchanted with her.

Once the pandemic took a grip on our lives, Grace was unable to connect with any teacher or class through her iPad or Zoom/Facetime. The one exception? Grace looks forward to her sessions with Ms. Bori, and readily engages with her as if they were in person. The huge smiles, blowing kisses, speaking in music; all of this has somehow continued between them across the great digital distance [caused by] our pandemic. It is safe to say that Grace’s sessions with Ms. Bori have been the one constant source of joy and continued development since March of 2020.

From this connection to Ms. Bori, Grace not only learns music theory, develops her keyboard skills, and continues to compose her own original melodies, but she also is seen by others as a complete human being; she is heard through music, and her very existence is affirmed through this important relationship. These fundamental connections are building blocks, a strong foundation for many other abilities to grow and blossom.

What are some challenges of pursuing music education for a student with special needs?
My husband and I were both acknowledged as being gifted in the arts from a young age, and many doors opened to us because of our abilities: acceptance, scholarship, performance opportunity, praise, and more.

Without having such a profound challenge in our lives, we couldn’t have imagined nor understood that for many, if not most, individuals challenged by ability, those doors remained closed, regardless of the inner passion to learn and grow in music or the performing arts.

Before we found the Adaptive Music Program, we tried to find instruction for Grace, and we personally encountered those many closed doors. The arts tend to focus on its stars, and that’s natural and understandable. We also love to see gifted artists shine through performance. However, if you agree that the measure of any culture is in the way we treat the most challenged among us, the culture of the arts is verily lacking in integrating those with disabilities into this realm of music education.

We encountered teachers who were initially open to the idea, but then became afraid they didn’t have enough education to scaffold appropriately for a special needs child. Most however, simply said she would be a distraction to other students in the classroom, or that it would be impossible to teach her anything.

How many doors did I knock on, only to be sent away (sometimes kindly, sometimes not)? How many times can a parent try to have that conversation to build a bridge between a school and a special needs child, only to be turned away before he or she simply runs out of hope?

It is an unparalleled experience to see a ballet studio in a strip mall with young children running amuck in their tutus, screaming and crying, like any child might, and be told that your child is not welcome there, even with an aide at her side because she is so different. It is a heart wrenching view of the world of the arts I couldn’t have imagined when I was an “achiever.” Only a few of us will ever see this perspective, but it’s important that we can all see the injustice and cruelty that still thrives in most of these arenas.

It is truly the mark of a rare and well-rounded educational institution to create a place and forum for offering real instruction in music to differently abled individuals, and we’re grateful to say Colburn has achieved this high mark in our books.

It is often through these rare and differently abled individuals that our true humanity can be revealed and felt. The spirit of music doesn’t know the boundaries of ability, as Beethoven, one of Grace’s favorite composers (and famously deaf later in life), might attest.

Anything else you want to mention about the Adaptive Music Program at Colburn or working with Ms. Bori?
Ms. Bori has opened a pathway to Grace’s spirit and heart through music, the likes of which I have never seen before. Beyond all of the educational benefit, from fine motor to gross motor, from math to melody, it is the accessing and opening of a child’s heart that had been previously locked up, which is most awe-inspiring. It transcends all perceptible value.

I used to say, “Grace cannot yet speak.” Now I understand that Grace can speak—through music. It took the well-tuned ear of an individual like Ms. Bori to detect the whisperings of Grace’s spirit, to hear it, to interpret it, and to nourish it into thriving growth.

The Adaptive Music Program at Colburn and Ms. Bori are the truest treasures we have found for giving Grace’s spirit the freedom to sing through music, knowledge, and ever-increasing ability.

If you want to be a part of the Adaptive Music Program, submit an inquiry today.

If you have questions about the Adaptive Music Program or any other program at the Community School, email cspa@colburnschool.edu.