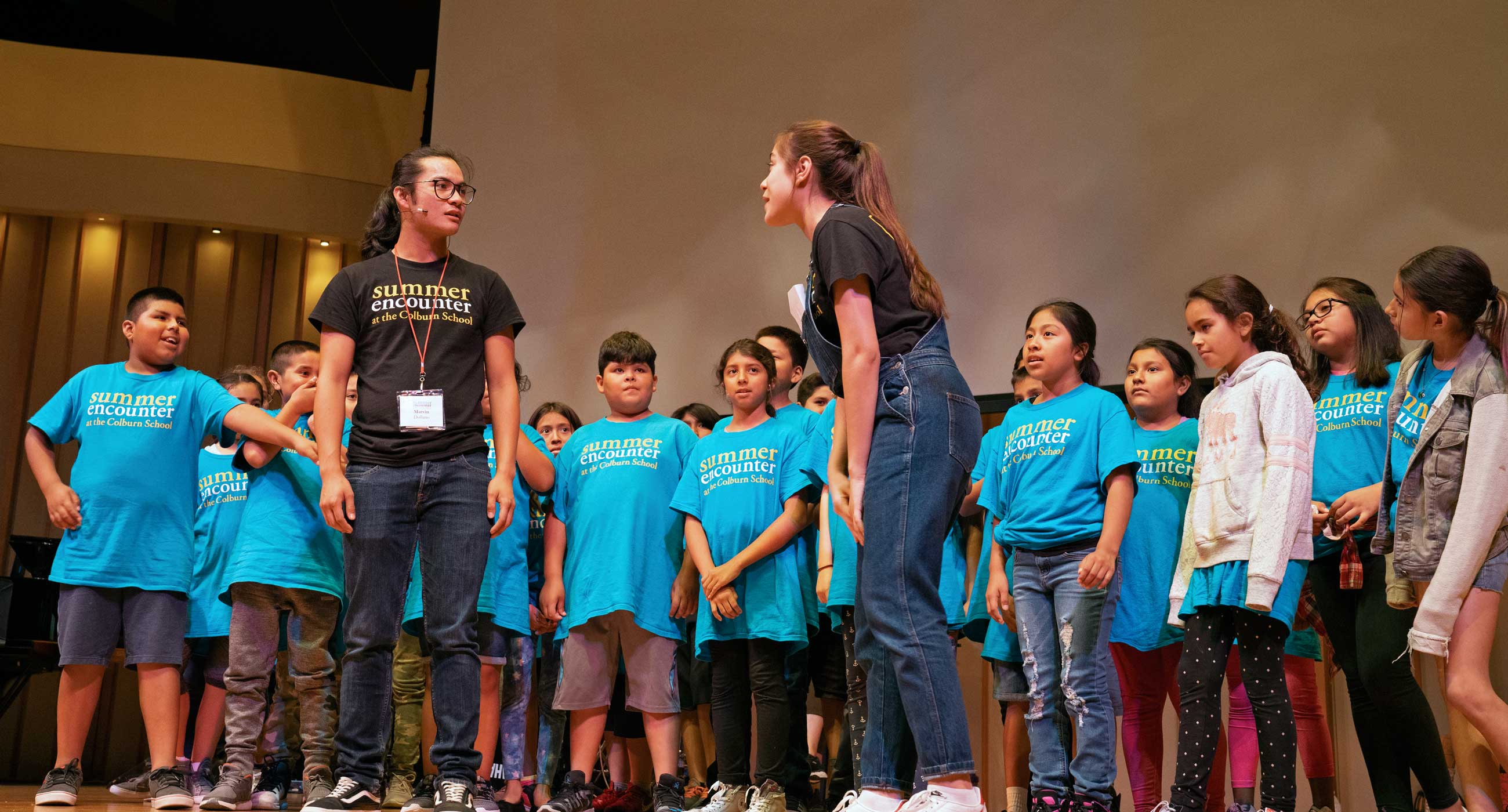 In this year’s Summer Encounter finale performance, campers and counselors discovered how honesty and truth could be used to better themselves and their communities.

Each summer in July, campus comes alive with the unadulterated joy and passion of our Summer Encounter campers. As fourth and fifth graders from underserved partner schools, many of which receive Title I funding, most experience music, dance, and drama for the first time here at Colburn. This year’s camp, the 17th since Summer Encounter’s inception in 2002, was dedicated to exploring the concept of truth.

During a whirlwind of classes, including poetry, drama, choir, dance, and more, campers, counselors, and faculty work together to stage and rehearse an original production that they perform for their families in a triumphant finale at the end of the two-week camp. Written by Summer Encounter Artistic Director and Colburn drama chair Debbie Devine, this year’s story examined truth through the lens of an important issue in our community, homelessness.

In the story, campers and counselors belonged to a musical ensemble that was electing an assistant conductor before going on tour. Several eager candidates, played by campers, made empty campaign promises impossible to fulfill. Another candidate, played by counselor and former Herbert Zipper Scholar Marvin Donallo, was inspired to be truthful. However, he left an important detail out of his campaign speech: he was homeless.

After another member of the group, played by counselor and recent Community School graduate Camille Orozco, discovered Marvin’s secret and betrayed his confidences to the ensemble, he dropped out of the race in shame. However, the group decided that in spite of his circumstances, he would be their strongest leader.

“What I find most important from that story is that it shows the kids an obvious example of the difference between fact and fiction, and it gives them the power to step up when they notice that something isn’t true,” Camille shared one day after camp.

“It’s important to show kids of the next generation the value of truth, and how it impacts everyone whenever they talk, or form a relationship with someone,” added Marvin.

Many campers reacted strongly when they heard the story for the first time because of personal experiences with their family members and friends in the same situation. Artistic Director Debbie Devine’s goal was to give them the tools they needed to cope with their emotions.

Part of that goal was learning how to examine truth and doubt both externally and internally. “Truth and fake news and that language has been part of our lexicon in the last 18 months, so we wanted to really look at what truth meant,” Debbie explained. “When you’re spending time with nine, ten, and eleven year olds, you really want to help them know how they can be honest about what they feel, see, and hear, and what they’re learning.”

After understanding their true and authentic feelings, campers were able to express them through art. Whether it was about homelessness, finding their soul, or staying strong despite fear, they were inspired to tell and own their truths.

“A big part of what we do as performing artists is to use our feelings as inspiration for the art that we make,” stated Debbie. “And an artist is someone who can express themselves authentically. It’s personal, individual, unique, and original self-expression. And when you can do that, when you can call yourself an artist, you can see yourself and identify yourself in many different ways. That’s why Summer Encounter is important, and I hope it continues to be important as long as Colburn is standing. And as long as I’m standing.”

Help our campers pursue their newfound passions for art with your gift to the Colburn School.