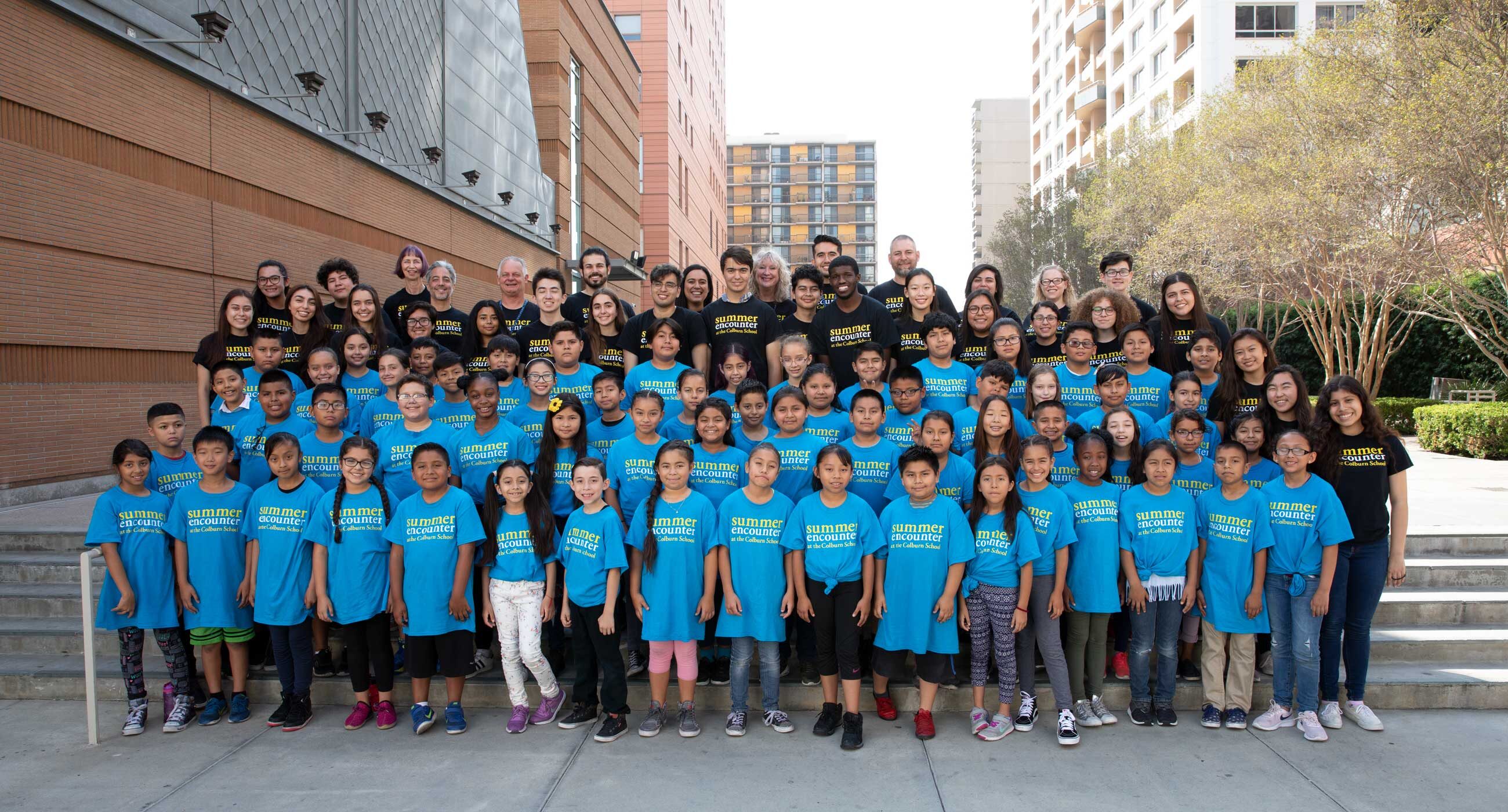 Sarai Benitez currently studies music therapy at Cal State Northridge; however, she got her musical start at Colburn’s Summer Encounter. She has returned every year since to help students discover their artistic capabilities. We talked with Sarai who served as Community School and Head Counselor during this year’s Summer Encounter program prior to the end of camp.

How did Summer Encounter go today?
We’re in our second week and tomorrow is our very last day, so today was about remembering all of the things we’ve learned and filming stuff for our finale, which is going to be like a movie. It was very fun! Today I had the chance to stick around after camp and meet with the soloist for our finale song. I love them [Summer Encounter kids] all, and I’m going to miss them so much after camp. They’re all so great.

How old are the campers?
We have kids who are going into fifth grade this coming fall, and we also have some returning campers who are in Jumpstart at the moment, so they’re in sixth and seventh grades. I’d say from 9 to 11 or 12.

Do they have experience in music or do you have to introduce them as beginners?
Our returning campers are all in Jumpstart, so they’re playing brass and wind instruments andhave music experience. But all the newer, younger kids—some of them have experience from school, but a lot of their schools don’t have music programs. This is their first time actually getting a chance to play any of these instruments. We gave them all their instruments for free, so we gave them a guitars, drums, and recorders. [The instrument is] something that they can keep and that they can continue to play throughout their life.

They get to keep that after camp as well, then?
Yeah. They were so excited! I was actually there when they came to pick up the supplies, and all the parents, would ask me in Spanish, “Are you for sure they can keep it?” And I’m like, “Yes, it’s free!” It’s so cute.

Do you think that makes it easier for them to keep pursuing music, when they can’t access lessons during the regular school year?
Of course. Especially with guitar—there are so many YouTube videos and websites where you can find chords and lessons. I think that will help a lot of them to continue music, even if they don’t get to take [in school] lessons in guitar.

Do many of them come back to Colburn to take lessons?
Yeah! After Summer Encounter, we have two different types of scholarships that we offer to 80% of the kids. We offer scholarships to the Community School where you can take guitar, voice, tap dancing, piano, or music theory. They have that scholarship until they turn 18. We also have Jumpstart, which [offers a variety] bands where they can play wind, brass, and percussion instruments. We have different ensembles within that program, and placement changes with age and experience. So let’s say you’ve been in Jumpstart for four years, then you’re going to move on to the advanced band. We try to keep those kids because they’ve shown commitment and we see potential in them and want to support them.

How has it been different with doing Summer Encounter online this year?
Well, we can’t have as many kids as we usually have in order to maintain a great experience. Typically, we have about 50 to 55 kids, but this year we have about 27. Seventeen of them are returning, because we wanted to make the adjustment easier for the newer kids—having examples on how to be respectful in class and all of that. We have about 14 new students. Though, we couldn’t have piano class, typically we have guitar, drama, voice, dance, recorder, percussion, piano, and spoken word. We took out piano because it would be logistically a huge challenge to provide to every child.

What skills have you been able to develop as an educator while navigating online learning?
I’ve gotten much better at Zoom, for sure! As the counselors, we’re responsible to create a counselor performance and we’ve had to do that digitally, so I’ve been learning how to edit video. I’ve seen at least two hours of Adobe Premiere tutorials, and I’m learning more techie stuff. It’s for sure helping me with skills I’ll need later on in my life.

We’re learning things that we might take with us next year, like the platform Seesaw. We’re seeing that the kids really like it, and it has a lot of potential to support us throughout camp. There are things that we’re catching where we’re like, oh, perhaps this is something we can use again next year, even if we’re in person.

When did you get started doing counseling for Summer Encounter?
I was actually a camper in 2010! I went through the whole Summer Encounter process and I was chosen to get one of the scholarships. After that, I really wanted to be a counselor. Every year around summer, I’d go to the registration office and I’d ask, “Oh, am I old enough to be a counselor this year?” And they would say no. I’d come back every year, and finally in 2015, they emailed me and told me, “Hey, you’re not quite old enough to be a counselor, but you can be an intern.” Of course, I said yes.

My job was to follow around the head counselor and support him in any way. By the second week, he had placed me into a group that needed more support. You could say I got the counselor experience, but I also got back of house experience. This is my sixth year working with Summer Encounter.

What are your favorite parts of being a counselor?
The kids. It’s always the kids. They’re so amazing. They teach me things every year, and I love how creative and thoughtful they are. They amaze me every year. I love the teachers and the faculty, I love the classes, but it’s always for the kids.

What are your responsibilities?
As regular counselors, we’re in charge of specific groups of kids. Within those groups, we’re in charge of, of course, wrangling them, but also supporting them. If we see that, for example, someone’s having issues in guitar, or they seem a bit shy, we’ll talk with them during lunch and try to figure out how to support them throughout camp. During camps in the past, we’re also in charge of setting up lunch and breakfast and helping out with pickup, which is a big, big mess! Parents are driving by in front of Grand, and we have 50 different parents coming within a span of 30 to 40 minutes. We go outside in the sun, we run to the car, get the name, make sure it’s the right parent, and take them out.

We’re also in charge of creating two performances. One is the counselor performance, which is more like a drama with music throughout the whole show, demonstrating our talents. This is right before the kids’ performance, as a way just to show them like, hey, we see how hard you’re working. We’re also working hard, and we want to give you this show as good luck. We also do a counselor skit. We dress up like the faculty and we always have a theme. We’ve done Pokemon before, we’ve done Dora the Explorer—something to entertain the kids because they’re getting nervous for the final performance.

Will those activities, including the final performance, happen via video, then?
Yeah. We’re also in charge of helping the faculty choose who gets scholarships. Since we’re with [campers] a great deal of the time, we get the best view of everything. We put a lot of hours in after camp at our counselor meetings talking that over and figuring out what could help who. It’s very different on Zoom. We’re still doing the final performance. We’re doing the counselor performance. We took out the counselor skit because there just isn’t enough time, but we’re trying to do as much as we usually do.

What do you look for in scholarship applicants?
Honestly, we’re just looking for kids who are interested in continuing music, who are focused, who show a lot of potential, and who really need it. A lot of these kids come from low income families, and they don’t get the chance to experience music at all in their schools, and they’re moving on to middle school which is even worse [for music education]. We’re looking for kids who need an outlet. As our artist director says, “even the most troublesome kid, we’ll take them because they’re the ones who need us the most. They need an outlet for their everyday life.” Art and music are such great ways to help people express and deal with emotions.

Is it a balance of who wants it the most and who you think could benefit from it the most?
Yeah. We’re always finding those kids who are super talented at everything. We’ll take them on, but we also want to take on the kids that are struggling in school, and their parents are struggling with them, and we can see that putting them into a band or an ensemble and helping them play an instrument could really support them.

Has there been a specific moment that stood out to you as particularly nice from camp this year?
There are so many! During a break between classes yesterday, my group stayed on Zoom talking about a whole bunch of stuff. We had a ‘who has the most teddy bears’ battle. We were all bringing our teddy bears out, and then at one point, our dogs started coming. By the time everyone had their dog on the screen, we were moved out of our breakout room to collaboration, and then you can just see all of my group with dogs. It’s fun because we get to share things that we wouldn’t usually be able to take to Colburn.

These kids—they’re amazing, they’re spectacular, they surprise me every day. The faculty and counselors, are so, so awesome. They are so helpful. I’m so thankful to all of them for giving so much time and energy. I can see that everyone really cares about these kids and they’ll put in their all.