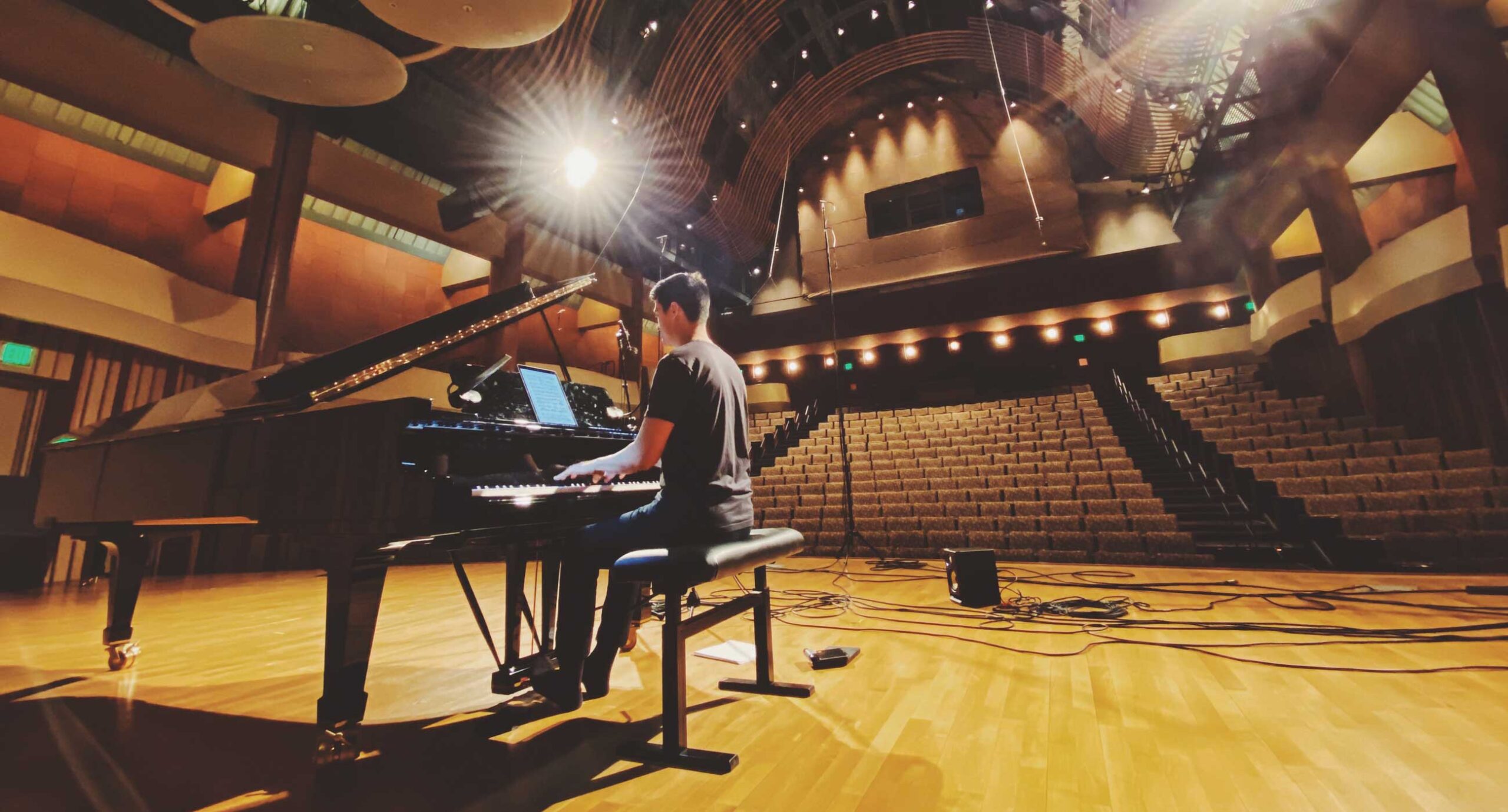 Frederic Rzewski has built his career on writing exquisite protest music, and Colburn’s own music theory and ear training faculty Thomas Kotcheff recently released a recording of Rzewski’s Songs of Insurrection with a nod to current times. Featuring essays by Colburn faculty member Kristi Brown-Montesano and other musicians in our community, as well as photography by Los Angeles photographer J Pinder, this album encapsulates how this last year has felt for many. We caught up with Thomas to ask him about his experience recording such a vital album in such a turbulent time.

Please share about your background, first of all. What do you do?
I did my undergraduate studies as a pianist and then did all of grad school in composing. Those have become the two hats that I wear in my career. As a pianist, I specifically focus on living composers, and I actively commission new works. I also play in a piano duo called HOCKET, where part of our core mission is to commission new composers and build the piano four-hands and two piano repertoire.

From the moment I discovered Frederic Rzewski, I have been an enthusiastic devotee of his music. The essential role of improvisation in his compositional process and the connection I felt to him as a trailblazing composer-pianist made me feel an instant connection to him.

I began performing his music as a student playing the piano variations Mayn Yingele on my undergraduate degree recital. I then continued to perform piano works such as Winnsboro Cotton Mill Blues, Which Side Are You On?, War Songs, and Cadenza (con o senza Beethoven) on recitals over the last decade. I also championed his chamber music, performing Snacks as well as the minimalist masterpieces Coming Together and Attica. My fascination with Rzewski has been academic as well. In 2018, I completed my Doctor of Musical Arts oral exams with a lecture on Rzewski’s The People United Will Never Be Defeated!

Did you make decisions about this album before the civil unrest this summer. Did you time the album release of it to coincide with the protests?
I programmed Songs of Insurrection two years ago, so we were in a different world altogether at the time. I really wanted to play a piece that was about being alive, right at this very moment. That’s why I love playing modern music, because it feels like a reflection of the world we live in, it speaks to me in that way. When I hear something written this year, it means it’s about being alive right now. When I programmed the piece, that was the case.

The piece was written in 2016—an election year and a very trying time in world politics and American politics. We recorded the piece at the end of February 2020 and I spent all of quarantine working on the edits and putting the album together. The piece felt like it was important to play and program last season, and it felt like every day that has gone by since then, it became more and more relevant to get the album released as well.

Would you talk about the album cover?
While we were working on editing the album, the Black Lives Matter (BLM) protests erupted around the country. I wanted this album to be a reflection of this moment in history and being alive in 2020 Los Angeles. For me, it was necessary that the CD captured the civil unrest that was occurring.

This is definitely leaning more into the technicalities of the album rather than the broader sociopolitical implications of it. But this was your first solo piano album, right?
Yes.

How was that different from the other recordings you’ve done?
The piece itself is just so big—70-plus minutes. As I was learning it I said to myself, ‘I can’t spend over a year parsing through this piece just to let it disappear.’ I knew I had to make something for archival purposes. Also, there wasn’t a recording out there when I started learning it, so it was exciting to think I could make the premiere recording.

In the recording session, the lights in the hall were making a buzz, so we had to record the whole album in pitch black. There was something very strange about being alone in a giant hall for three straight days, playing the hardest music I’ve ever played, for eight hours a day. It was a very, very bizarre experience.

Usually, if I’m in recording sessions I’m with my HOCKET piano duo partner. There’s a little bit more of a group mentality. This one was a mentally taxing experience, and the piece is just so massive and so hard. It’s hard enough to play it once through, let alone continuously for three days straight in the dark.

Do you think that the, for lack of a better word, strangeness of that experience influenced your interpretation of the piece?
One thing that’s really cool about Rzewski’s music is there is an element in each movement for an optional improvisation. I’ve elected in the third and the seventh movements of this piece to take a rather long and elaborate cadenza. Both of them are about five minutes long. When you do an improvised cadenza, you are subject to the space and time you are in. When I hear those cadenzas played back on the recording, I think about being in that dark room, at the end of my mental wit, trying to play this piece and perform it like it was just any other day of the week. I think there’s something beautiful about catching that in those improvisations.

Are you intending to perform the piece again at any point?
I was hoping to play the entire piece again in this current concert season, but obviously things have changed. So there are not any more upcoming performances planned. When I did the initial run of the piece last season, I did about 9 or 10 performances. They culminated in a concert here in Los Angeles on Piano Spheres in Zipper Hall.

Since then, I’ve done two shorter excerpted performances virtually. One of them being [recently], my album release concert, where I played three of the movements. I also did a performance a few months ago on Electric Earth Concerts, where I played one of the movements. The piece can be segmented because it’s in seven parts. I would love to play the complete piece again in a future season, once the world can come back to the concert hall.