We’re Adding a New Instrument to the Family

Thank you for your support!
We raised all of our $3,800 goal

The spring semester may be coming to a close, but all of us at Colburn are looking toward the next big thing: officially welcoming our students back to campus. We can’t think of a better “homecoming” gift than expanding the resources we provide for our students and adding a beautiful new instrument to our rehearsal and performance halls.

Right now, Colburn is uniquely positioned to acquire a mint condition Deagan 870 xylophone located right here in Los Angeles. It would be a fantastic addition to our Community School for private lessons and percussion workshops, as well as orchestral and chamber music ensembles.

More about the Deagan 870 Xylophone 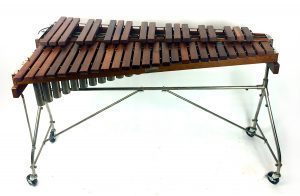 Above is an example of a similar instrument

The J.C. Deagan company was founded in the late 1800s by John Calhoun Deagan in St. Louis, Missouri and later moved to Chicago, Illinois. They built a variety of percussion instruments, including many novelty percussion instruments. Trained as a concert clarinetist, Deagan’s dissatisfaction with the intonation of the glockenspiels used in theater orchestras with which he performed led him to experiment with the acoustics and tuning of the instrument. As a result of these experiments and his study of the German physicist Hermann Helmholtz’s work on acoustics, Deagan developed the first scientifically tuned glockenspiel. This was the beginning of a career that has affected every musician and percussionist for the past 120 years.

Deagan mallet percussion instruments are some of the finest ever manufactured. As many of them were built nearly a century ago, it is becoming increasingly difficult to find them in original or mint condition, and their value continues to appreciate.